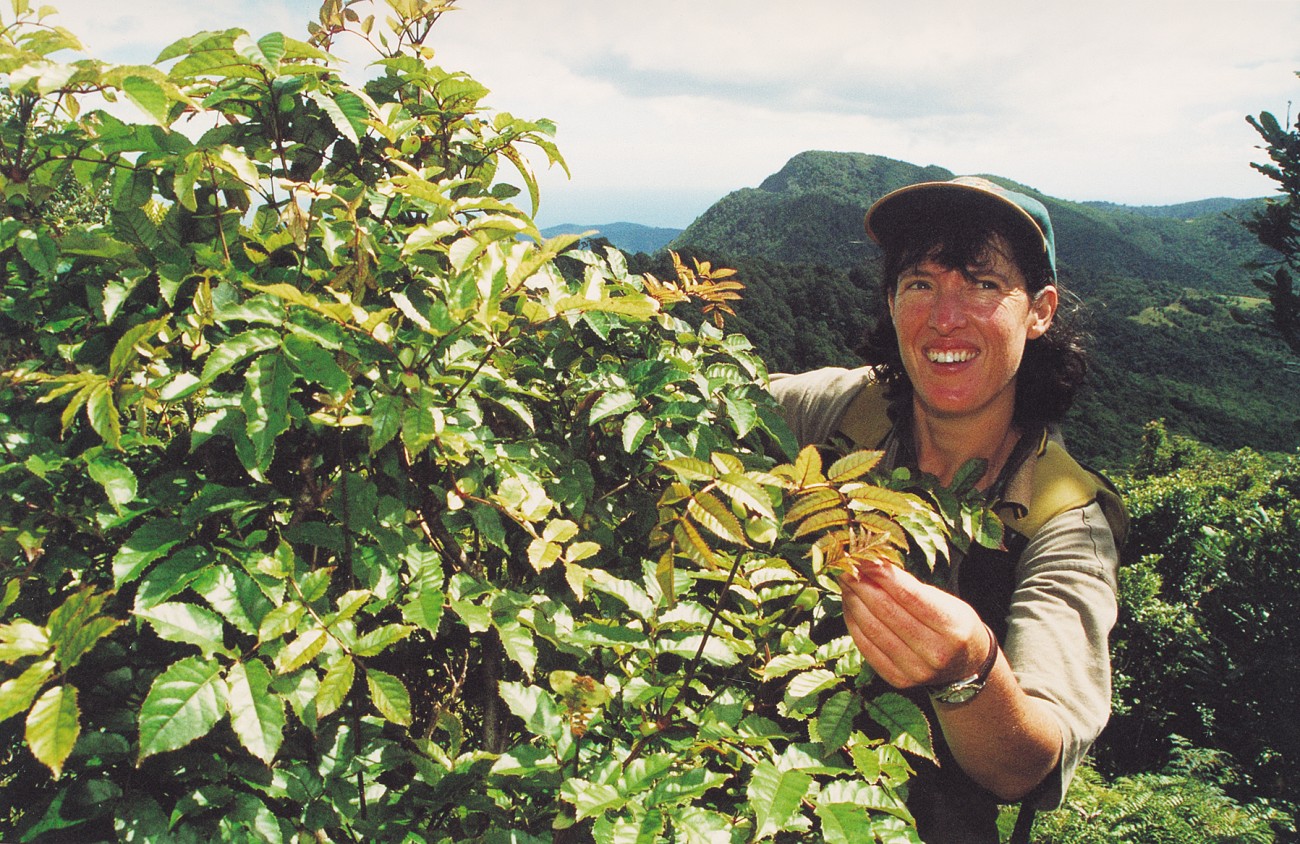 It is probably every botanist’s dream to discover a new species. In practice, reaching this goal generally means hours of hard work examining herbarium specimens or visiting an unexplored part of the globe.

Even then, most new vascular plant discoveries are of small shrubs, herbs, and grasses, and genuine discoveries of large tree species such as the wollema pine (Wollemia nobilis) in New South Wales or Bartlett’s rata (Metrosideros bartlettit) in the Far North, are very infrequent, particu­larly in New Zealand.

So when Karen Riddell, a botanist with the Northland conservancy of the Depart­ment of Conservation, undertook a routine inspec­tion of a privately owned forest remnant which had been offered for possible inclusion in Waima Forest, she didn’t expect to find anything especially unusual.

However, within the rugged forest south of the Hokianga Harbour, Riddell soon discovered specimens of a 15 m tree which was completely unknown to New Zealand botanists.

The new tree initially posed something of a challenge to identify. The first set of specimens Riddell obtained, in February 2000, lacked flowers or fruits, and led her to think that it might be a hybrid between towai (Weinmannia silvicola) and makamaka (Ackama rosifolia). Such a possibility was cast aside once DoC botanists Peter de Lange and Lisa Forester and Auckland Museum botanists Rhys Gardner and Ewen Cameron saw the specimens.

After comparing the samples with related genera and discussing the matter with experts overseas, they suggested the tree might he a new species of makamaka, an identification confirmed when fruiting material and then flowers were discovered in July 2000 and February 2001 respectively.

Independent confirma­tion came from DNA analyses of samples sent to Victoria University botanist Phil Garnock-Jones. These showed that, although allied to makamaka, the new tree differs from that species and from two other Australian species of Ackama in several ways, including its conspicu­ous yellow stipules, large leaflets and fruits. The new species is still in the process of being formally described.

Although few trees were found in February 2000, further field surveys revealed that there are about 500 specimens of the new .-likama, all apparently confined to a single area. Most of the trees are of a similar height (about 8 in), grow in dense clusters of 5 to 20 individuals and seem to favour exposed or sunny sites on forest margins, slip scars and steep skeletal soils associated with cliff scarps. Seedlings have been found only as epiphytes on tree-fern trunks and among low ferns and grasses.

The finding of the new tree within the Waima Forest comes relatively close on the heels of the discovery of two other species endemic to the area. The first of these is a large-leafed species of Coprosma (C. waima) which was formally described in 1989; the other, a spectacu­lar large-leafed species of tree daisy (Olearia) which still awaits description. Collectively, all three species present something of a biogeographical puzzle, as the habitat they occupy is found elsewhere in western Northland, and the geology of the area is not unique.

Possibly the wet and often cloudy weather conditions which make Waima Forest the wettest and coldest part of Northland may explain this botanical anomaly, although the climatic differences between this area, and, say, those prevail­ing in the Warawara Range, on the northern Hokianga, are not great.

Furthermore, there are other western Northland endemics, such the attractive flowering shrub Hebe perhella, which span all the high points of the Ahipara gumfields, the Herekino and Warawara Ranges and Waima Forest.

Who knows what other surprises the jungly forests of Northland may hold?