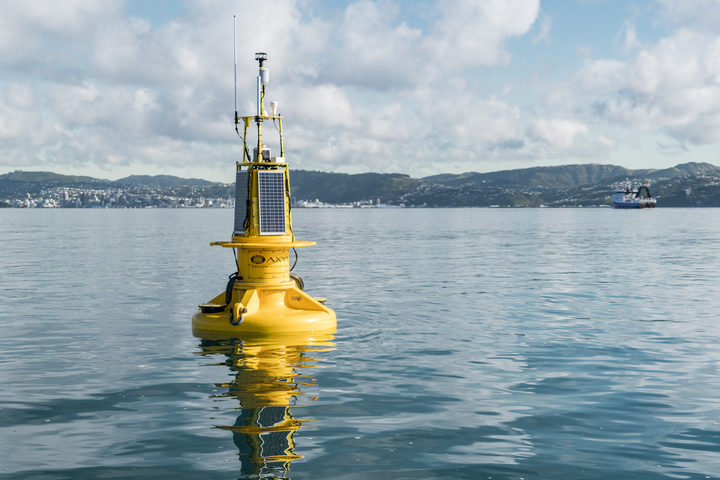 A smart buoy anchored in Wellington Harbour is phoning home with information about local weather and sea conditions.

That information is now freely available online, and could be a boon for local boaties, as well as providing unique insights into what happens when large amounts of muddy water flow out of the Hutt River into the harbour after heavy rain.

The solar-powered 3-metre tall surface buoy carries various scientific instruments, with further instruments tethered at various depths on a rope that is anchored to the sea floor 20 metres below.

“WRIBO tells us about water temperature, salinity, oxygen and what the waves and wind are doing,” says NIWA oceanographer Dr Joanne (Joe) O’Callaghan.

“The nice thing about these real-time data is that we don’t have to go out in a boat, and we don’t have to wait for the weather,” says Joe. “We can sit at our computers and collect data in real time.”

The real-time data are now freely available on the Greater Wellington website, and coastal scientist Dr Claire Conwell says the weather data from WRIBO will be particularly valuable to local boaties and weather watchers.

Joe says that the movement of water in Wellington harbour is not well understood. Even though the harbour isn’t very deep, she says there are layers of water in the harbour that differ in salinity, temperature and oxygen level.

“It’s hard for you to move between the layers if you are, say, plankton. So understanding the time scales over which these layers change is really important for thinking about how healthy the harbour is.”

Muddy water from the Hutt River

One of the key roles for the buoy is to monitor plumes of muddy freshwater that wash into the harbour from the Hutt River after heavy rain, carrying sediment and nutrients.

Claire says that getting this type of information is important, as it will enable researchers to “draw linkages between what’s happening in the freshwater space and how that influences the coastal environment.”

Water from the Hutt River usually takes more than a week to clear the harbour, but it can take much longer following a flood.

Joe says they have already observed a number of major flood events caused by ex-tropical cyclones, such as Debbie, Cook and Donna in autumn 2017 (some of this data was collected on a temporary buoy that preceded WRIBO). She says it was fascinating watching these events unfold in the harbour.

“We get the horrible winds, the rain and then that ultimately discharges out of the Hutt River into Wellington,” says Joe.

“Normally ocean salinity is about 35 [salinity units], but what we measured at the buoy was down to 10, so this is quite substantially fresher.”

After heavy rain, Claire says there is a very visible muddy plume of freshwater from the Hutt River that can extend across the entire harbour, eventually making its way up Evans Bay.

Joe says this layer of brown freshwater is not very deep, which is why it is important to have instruments at different depths as well as on the surface buoy.

“We know that plumes are really only one to two or three metres thick, and they sit on the top as they flow out of Wellington harbour – or any other harbour around New Zealand,” says Joe. “And they’re a cap, a low salinity cap.”

Joe says that the impact of a two to three day rain event might last for two to three weeks in the harbour water. “The ocean has a longer memory than our memory.”

In the days following a major flood, differences in the various water layers are more marked than usual, and Joe says this changes the way water flows around the harbour.

However, over time, winds, waves and tides slowly mix some of the muddy freshwater with the seawater, before it eventually flows out the harbour into Cook Strait, where it continues to influence water quality.

How hot is the harbour?

The summer of 2017-2018 saw a marine heat wave in the Tasman Sea, with sea surface temperatures up to six degrees Celsius above normal.

Joe says she only has one year’s data for Wellington Harbour so she cannot tell if water temperatures were above average, although the hottest water temperature recorded at the buoy this summer was 22°C .

While the buoy data are freely available on the Greater Wellington website, it is a little challenging to find, so here si a quick guide:

In the box ‘Step 1 – select site’, search for WRIBO, which should bring up ‘Wellington harbour at WRIBO’.

In the box ‘Step 2-Measurement’, select what data you would like to see.

Other smart buoys around New Zealand

As well as WRIBO in Wellington, there are other smart buoys positioned around New Zealand that also transmit real-time information.

TASCAM in Tasman Bay is managed by the Cawthron Institute and featured on Our Changing World in 2013.

The HAWQi buoy is moored in Hawke’s Bay

There are a number of floating and moored southern ocean wave buoys south of Campbell Island, managed by MetOcean Solutions, which measure wave heights – including an epic 19.4 metre wave in May 2017.