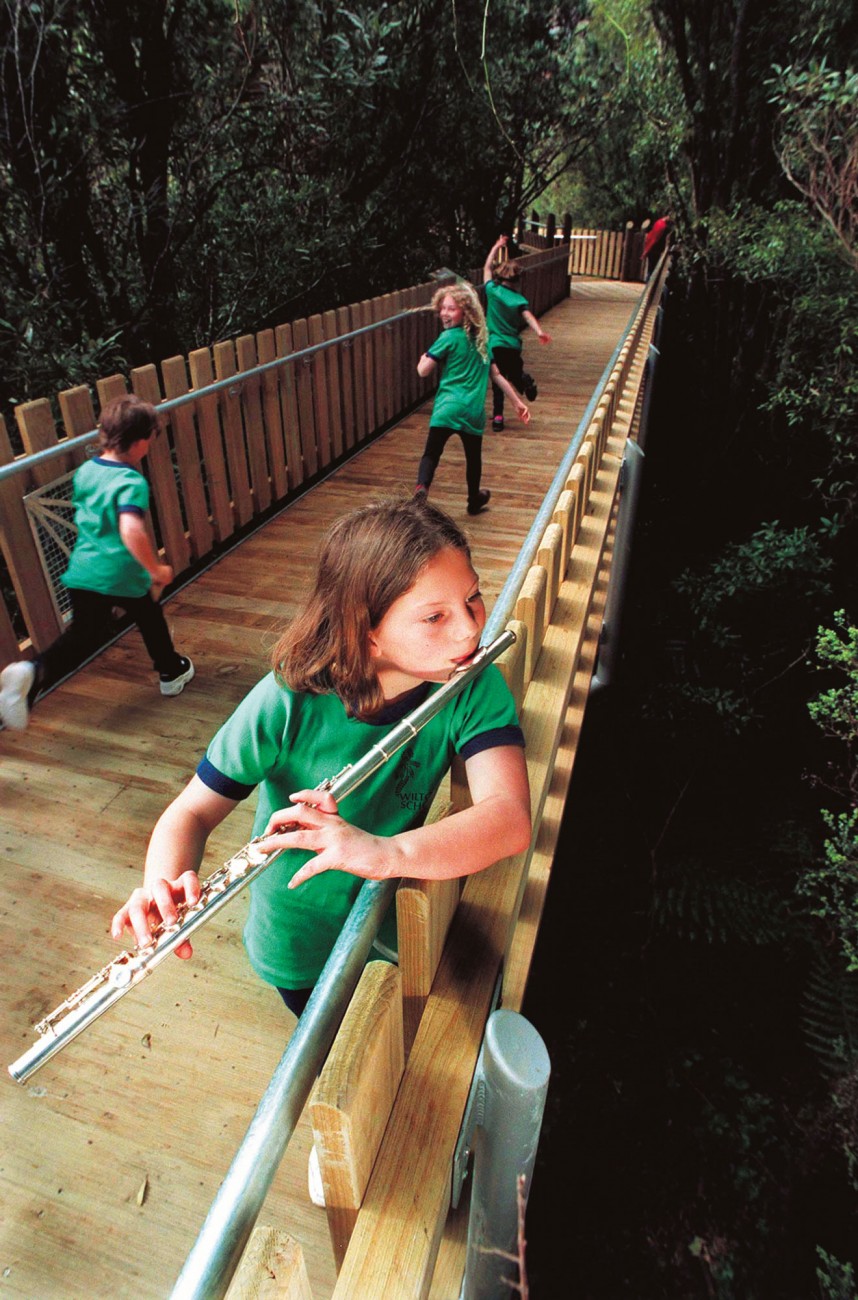 Although numerous museums have disabused me of the notion that spe­cial collections have to be displayed in stodgy, poorly lit, indoor spaces, the idea of an open-air native plant museum like Otari–Wilton’s Bush, in Wellington, still intrigues me. But, when one considers that the root of the word “museum” comes from the Greek mouseios, meaning “of the muses”, an outdoor museum dedi­cated to native plants seems more comprehensible. In fact, in Greek mythology, the nine sister muses preside over song, poetry, arts and sciences, and on any given weekend visitors to Otari–Wilton’s Bush might indulge in one or more of these pursuits.

About 1200 plant species are rep­resented in the reserve, which is the only botanic garden devoted solely to New Zealand’s native plants. It features more than 100 ha of native forest and 5 ha of native plant col­lections, and for much of its life has been known as the Otari Open-Air Native Plant Museum.

The plants to which it is home come from all over New Zealand, including from the Kermadec Islands, 1000 km north-east of Auckland, and from Campbell Island, some 700 km south of Bluff. Botanists, plant taxonomists, cytologists, ethnobota­nists and garden enthusiasts come from all over the world specifically to see the collections. The reserve averages 95,000 visitors a year.

Like any museum, Otari–Wilton’s Bush features some special collec­tions that attract aficionados from near and far. Whereas your conven­tional museum or art gallery might be known for its old Maori carvings or Rita Angus paintings, here there are assemblages of flax cultivars, hebes, grasses, pittosporums, coni­fers and more.

Other visitors are drawn to Otari–Wilton’s Bush by the op­portunity to see some of the rarities to be found there. For instance, Coprosoma acerosa, now extinct in the wild, formerly grew only near the Red Rocks of Wellington’s south coast, where it was wiped out by pest animals that foraged on it and non-native weeds that displaced it. Fortunately, there are places such as the reserve where it is now not only cultivated but thriving. It is difficult to view this woody, milk-chocolate­coloured, low-growing plant without feeling a sense of awe.

Some of the plants brought to the reserve from the Three Kings Islands, 60 km north-west of Cape Reinga, are represented in the wild by only single specimens. Several are now grown in gardens, including Pen­nantia baylisiana, a lush-looking tree with big glossy leaves, and Tecoman­the speciosa, a vigorous vine with white trumpet-shaped flowers. Both can be viewed in the reserve’s wild garden.“Every plant here has a story,” says Robyn Smith, the reserve’s cura­tor, as she takes me on a tour. She tells me about a small geranium with the tag name (what a plant is called before it is formally identified and named) Geranium aff. sessiliflorum (“Von River”). “It’s quite hard to see because it’s so small and well dis­guised. Its grey-green leaves have a funny red splotch on them, and each leaf is only about 1 cm wide. The plant was unintentionally discovered beside the Von River in Southland by the late Tony Druce, a botanist. I say unintentionally because he brought back a chunk of soil with some plants on it and potted it. Only then did this lovely little geranium pop up; he had no idea it was in the soil when he brought it home. No other specimen has ever been located in the wild, but the reserve now cultivates it. And, as every gardener knows, geraniums can grow like weeds, so it’s done quite well here. We’ve sent plants down to DoC Otago so they can study and learn about the plant’s attributes first­hand. Reserve plants frequently help fill information gaps.

Her words would have warmed the heart of Dr Leonard Cockayne, the renowned botanist and first director of the reserve in the days when it was called Otari Open-Air Native Plant Museum. In numerous books and papers, Cockayne wrote ardently about the many distinctive plants found in New Zealand. In his seminal work, New Zealand Plants and Their Story, published in 1910, he declared: “There are thousands of acres fit only for the natural growths now clothing them, and the destruc­tion of these forests would be a fatal mistake.” Such sentiments explain why he worked so diligently in the 1920s with J.G. MacKenzie, director of Wellington Parks and Reserves, to devise a plan for a local open-air plant museum.

Before European colonisation, the Wilton area was densely forested with rimu, northern rata and tawa. The forest provided a prime hunting spot for local Maori, who called it Otari, or “place of snares”.

From the mid-1800s to the early 1900s, the area fell under the owner­ship of various settlers. One of these, Job Wilton, farmed much of the land but protected a sizable forest around his home, some of which now stands

Then, at the turn of the century, peo­ple looked around and realised what they had lost, and they scrambled to save this last teeny, tiny remnant of forest. We owe a great debt to the likes of Job Wilton and some of the residents of Wellington who were willing to preserve the area until the government could afford to acquire it in 1906.”

In 1918, the land was transferred to the city of Wellington for “recrea­tion purposes and for the preserva­tion of native flora”. As a result of the vision of MacKenzie and Cockayne, in 1926 the site became the Otari Open-Air Native Plant Museum. The objectives of the reserve haven’t changed much since that time. The original four-point scheme still holds: to establish a collection of as many New Zealand species as possible for cultivation in the museum; to propagate various important types of primitive vegetation typical of New Zealand; to restore the bush area to its original form; and to illustrate how indigenous plants could be used in home gardens and for other horticultural purposes.

Although the reserve has re­mained steadfast over the years in pursuit of these goals, its name has varied. Under curator Walter Brock­ie, it was changed to Otari Gardens in 1949, only to revert to the former designation after Brockie’s tenure came to an end. In 2000 it became Otari–Wilton’s Bush in recognition of both Maori and European influ­ence as well as the significance of the native bush that remains.

The reserve’s impressive plant collections rightfully receive a lot of attention, but the native bush too, is a joy to tramp through—there are 11 km of tracks—and it is important both for wildlife and for the insight it provides into original and regenerating podo­carp forest. Rimu, kahikatea, totara, miro and matai all flourish. Kawakawa and various climbing plants, ferns and epiphytes also abound.

“The birds have come back to the forest over the past few years,” says Dave Bidgood, a collection curator who has worked at the reserve since 1994. “A visitor used to be lucky to see a fantail or two in the re­serve. Now we go out in the morning and see nine tuis on a single tree. Last spring we even had a confirmed sighting of a robin on one of our tracks here. The num­bers of kereru, tomtit and other birds started increasing once we got serious about pest control in 1993. It’s kind of exciting to realise that our native plants here are again providing habitat for native birds.”

Revegetation work by volunteers and a part-time staff member over the past five years along part of the Kaiwharawhara Stream both inside and outside the reserve has also enhanced the area’s value to wildlife.

As I walk along with Smith, we wander by the fern­ery, which is one of my favourite parts of the reserve. I mention this to her and she tells me that the storms in August 2004 felled a large tree nearby and that the ex­tra light getting in is adversely affecting some ferns. As Cockayne wrote, “Though many plants are eager to get into the fresh air and sunlight, others are the reverse, and have developed different adaptations in accord with other aspirations.”

Smith helps me grasp just how much effort goes into protecting and maintaining a living museum. With many plants in the collections classified as rare or endangered, and overseeing one of Wellington’s few regenerating native forests a heavy responsibility, the stakes are high.

Otari–Wilton’s Bush may indeed have been inspired by the muses, but its preservation is due to those who have been willing to get dirt under their fingernails and calluses on their hands, and to share our native flora’s.