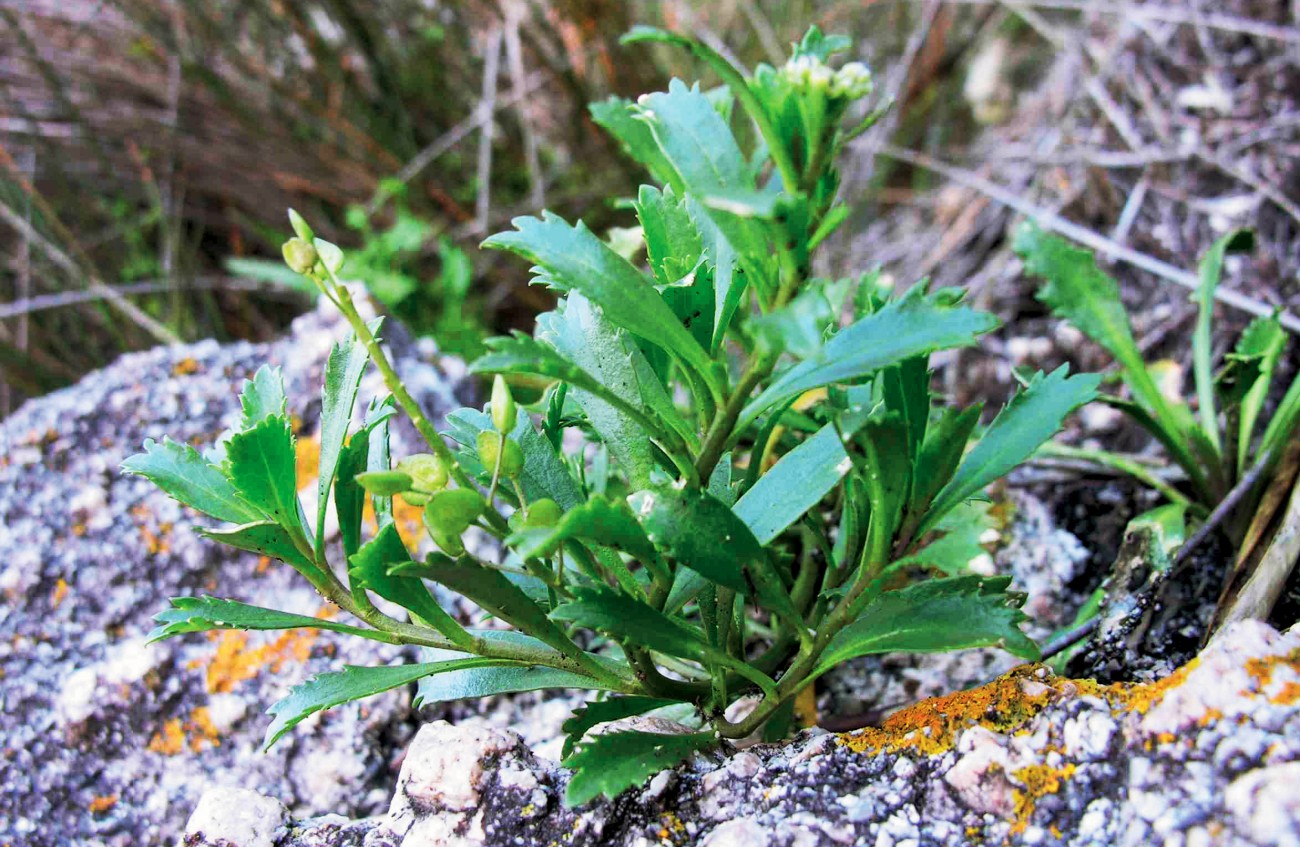 Coastal Peppercress, Lepidium banksii, is perhaps the most threatened of New Zealand’s 11 indigenous lepidia. Thomas Kirk described the species in 1899 from material col­lected by French explorers during the Dumont d’Urville survey of the coastline of what is now the Abel Tasman National Park. He also recorded its presence in the Marl­borough Sounds, where it was last seen in the early 1900s. But so little known did the plant remain that when Harry Allan wrote about it in the Flora of New Zealand series in the 1950s, he was reduced merely to quoting Kirk’s original description. He had seen no recent specimens and didn’t know the species.

Coastal peppercress is superfi­cially similar to Cook’s scurvy grass (L. oleraceum), or nau, but has a more rambling habit, darker-green, more deeply toothed leaves, dies back completely to the root stock in winter, and has much larger, round­ed and deeply notched seed pods (silicles).

In 1961, L. banksii was discovered by botanist Alan Esler near Totaranui. Esler didn’t realise what he’d found, though, and called his specimens L. oleraceum, their true identity re­maining unrecognised until the New Zealand lepidia were revised by Phil Garnock-Jones during an examina­tion of indigenous and naturalised brassicas in 1988. A quick survey revealed the plant’s continued presence along the coastline north of Totaranui, and at about the same time the species was found by DOC botanist Shannel Courtney during a survey of the vegetation and fauna of the Waimea estuary, near Nelson.

The conservation of the spe­cies has been particularly frustrat­ing because the plant seems to have a death wish. It is prone to a wide range of introduced pests and pathogens, is extremely difficult to maintain under cultivation (it is best treated as an annual), and has proved well-nigh impossible to plant out successfully in the wild.

By 1990 only 26 plants were known in the wild. The follow­ing year, an all-time low of 22 was reached. In 1994, Simon Walls of DOC was delighted to find a large natural population—450 plants—growing on sand dunes at remote Mutton Cove, at the northern extremity of Abel Tasman National Park. Unfortunately, the local wild pigs found it at about the same time and within months none of the plants remained. So as a protective measure to ensure against further losses of this critically endangered species various low-lying islets, rock stacks and islands were com­mandeered across Tasman Bay, and plants optimistically planted out each year. All died, some within weeks,all within a year. By 2000 it was agreed that the strategy of growing plants up and then planting them out was accomplishing little. A new tactic was required.

Armed with a grubber, a bag of seed and lots of optimism, Walls and his Motueka-based DOC col­league Roger Gaskell sallied forth along the Abel Tas­man coastline and nearby Moutere and Waimea Inlets looking for sites where seals, shags, penguins, terns or gulls congregated and which were therefore well sup­plied with guano. Together they grubbed out weeds, scratched the ground to gather the coarse soil into beds—or on the Abel Tas­man coastline constructed countless mini containing walls of granite on near-cliff faces—and scattered seed. Within weeks their efforts produced seedlings and, miraculously, at most sites these flourished. By 2003 there were 265 plants; by 2006, 335. Although the number continues to vary, the species appears to be holding its own, and some natural recruitment is now taking place. Curiously, Walls and Gaskell have found that the species does best during drought years. Wet summers appear to favour rank weed growth and disease. All three DOC staff are modest about their work: “Its only gardening, but in what a landscape!”

Gardening or not, their exertions have clearly saved the species from curring wild plants left: all those that are known are the result of endeav­ours by Gaskell, Walls, Courtney and other Motueka-based DOC staff.

Landcare Research together with DOC scientific staff are now hoping to DNA-fingerprint every plant to de­termine the level of genetic variation that remains. DOC then aims to use that data to help prevent the level declining further.

The funny thing about this con­servation battle is that almost no one in New Zealand knows anything about it. Yet the coastal peppercress, despite its unassuming character, is every bit as important to biodiver­sity as many higher-profile species whose conservation is backed to the hilt by sponsors and government resources.