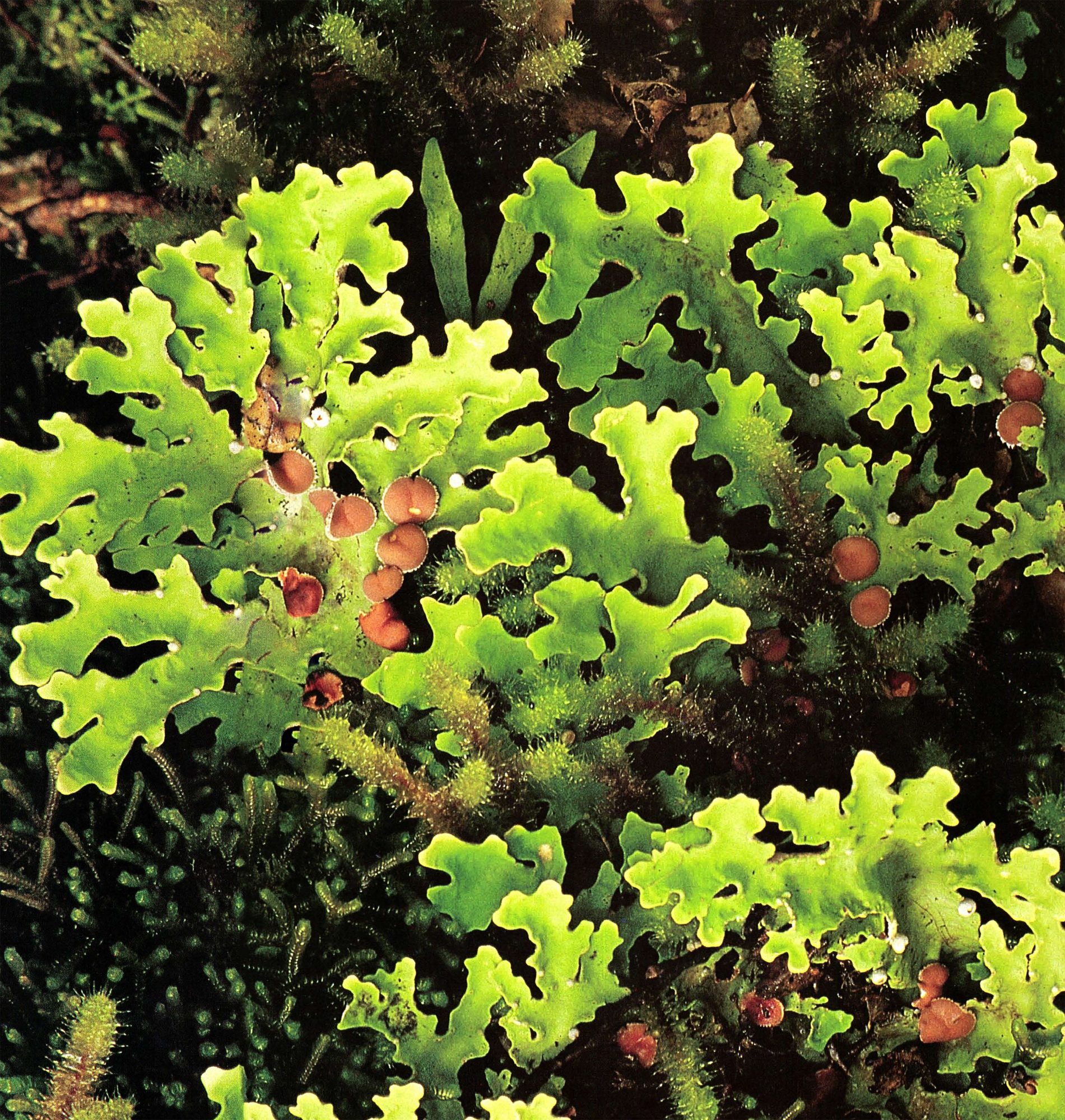 New Zealand is famous for its unusual native plants, most of which are unique to these shores — four out of five of our trees, shrubs and ferns are found nowhere else. Not so our mosses, liverworts and lichens. Many of these plants are found at least as far away as Australia, while some have colonised the entire Southern Hemisphere and a substantial number grow worldwide. The reason why these tiny and obscure plants are so much more adventurous as world travellers than their more advanced cousins is that they have a talent for producing propagules that can travel enormous distances on the wind and then promptly sprout in new lands. These propagules can also stick to the feet and feathers of migratory birds, or get splashed around by rain. Both lichens and liverworts use ‘splash-cups’ to harvest the energy of falling rain drops and blast propagules out and away from the parent plant. Mosses and liverworts are said to be totipotent, meaning that literally any part that has broken off can grow into a new plant.

Lichens are made up of not one but at least two kinds of organism: a fungus plus either an alga or a cyanobacterium (previously known as blue-green alga), and sometimes both. The algal or cyanobacterial cells photosynthesise and provide nutrients for the fungal partner. The fungus provides a structure of densely packed threads which trap moisture and give physical support to the partnership. The colour of a lichen is largely determined by the kind of alga or
cyanobacterium present. Many lichens are popular with wool-dyers because they yield a remarkable range of stable dye colours. Harris tweeds from Scotland are still dyed with crottal (the lichen genus Ochrolechia), which gives the tweeds their characteristic musty odour as well as their colour. Before the discovery of synthetic coal‑ tar dyes various lichen dyes were used to colour jams, preserves and even soft drinks, as well as fabrics. The browns, oranges, yellows and even blacks of some forest carpet plants result from accessory pigments, which the plants produce in addition to their usual green chlorophyll. Such pigments play a vital role in the life of the plant. Some trap wavelengths of light that chlorophyll cannot absorb, while others protect the plant from harmful ultraviolet radiation.

Most mosses and liverworts do not have true roots, so they must get their water from rain on their surface rather than from the soil they are growing on. This arrangement makes them vulnerable to drying out in times of drought, but they possess a number of adaptations to cope with the problem. For example, their leaves are equipped to soak up quickly the dew that condenses during the night. Some are able to store water in the junctions of their leaves and stems or else among their many overlapping leaves. If a real drought sets in and that water evaporates, their leaves just dry out and fold up against their stems — the plant essentially`switches off’ until re-wetted.

Sphagnum moss, the stuff of peat and peat bogs, is so absorbent it can hold 25 times its dry weight of water — 5 times as much as cotton wool. Because of sphagnum’s ability to soak up water like a sponge, it can spread out well beyond its water supply. If it expands into nearby forest, it can eventually waterlog the soil and kill the trees.

Lichens grow fastest when they constantly alternate between wet and bone-dry — so dry that they snap like potato crisps — and in fact they soon die if they are kept soaking wet. Their ability to suspend metabolic activity during times of drought, then quickly come to life when moisture allows them to, has enabled them to live in places that would be lethal to other land plants.

The microscopic world of lichens

'And for Marlborough...' fine and dry