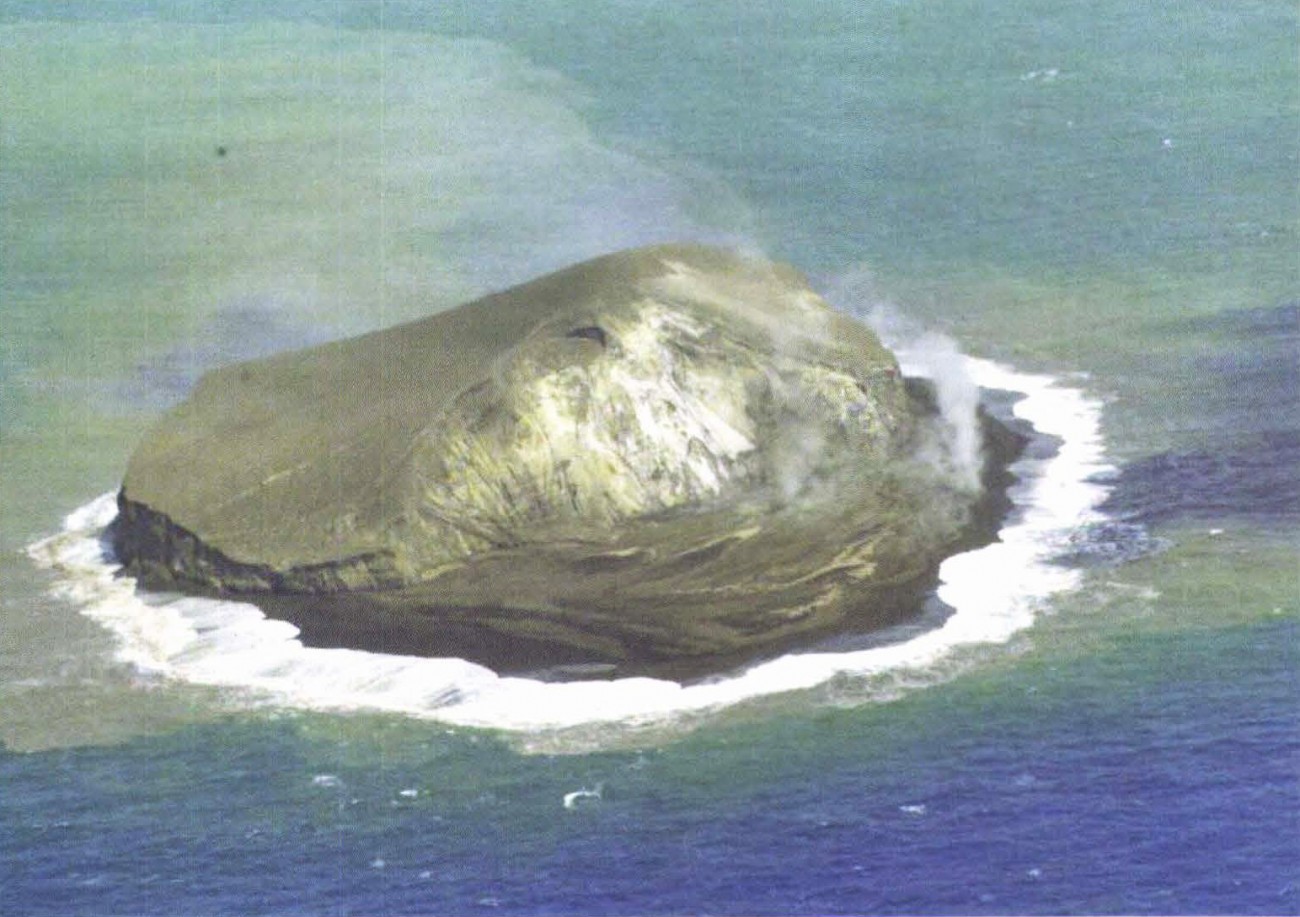 Officially, Tonga comprises 169 islands, only 30 of which are inhab­ited. Most are composed of raised coral or are low sand cays, but to the west of the main island chain is a line of volcanic activity running roughly north-south.

Tonga lies in a zone where the Indo-Australian tectonic plate is be­ing pushed upward to form a ridge by the Pacific plate as the latter is being forced beneath it. This action has also created the Tonga Trench, 10,882 m at its deepest point (the second deepest point in the world’s oceans) to the east of the main islands. This trench becomes the Kermadec and Hikurangi trenches as the plate boundary approaches New Zealand.

Two islands on the western chain, Kao and Late (pronounced “Lah­tay”), are near-perfect cones, rising straight from the sea. Tofua, 6 km south of Kao, is a large, high, active caldera with a crater lake. Tofua often displays a column of volcanic gases and steam, in much the same way as White Island does.

Captain Cook observed volcanic activity on Tofua in 1774, recording the “continual column of smoak we saw assend from the center of the isle” as he sailed between Tofua and Kao. Cook was again in the area in 1777 when William Bligh was sailing master on the Resolution.

Twelve years later, during the Bounty mutiny, Captain Bligh was set adrift in a longboat in the vicinity of Tofua on April 28, 1789. Bligh land­ed on Tofua, but when the inhabit­ants killed one of his men he left to sail further west, finally landing at Timor in Indonesia on June 14.

Late was inhabited until the late 19th century when King George Tupou I evacuated the residents to a village on the Vava’u island of Hunga, to protect them from Peruvian “blackbirders” who were capturing hundreds of Pacific island men to use as slaves.

The Ha’apai island group in the middle of Tonga suffered a magni­tude 7.9 earthquake on May 4, 2006. Assumed to be linked to volcanic ac­tivity, it was Tonga’s largest recorded quake, and the strongest in the world that year. The tremor knocked down church steeples and damaged buildings, including the hospital at Pangai, the capital of the Ha’apais. Several concrete wharves, built with Australian aid, were cracked and severely damaged. In New Zealand, there was some panic after the BBC broadcast false reports of an ap­proaching tsunami.

In May 2006 I went sailing in Tonga with my friend Phil Plimmer on Different Drummer, a Lotus 10.6. Knowing of the recent earthquake, it was no surprise to hear on the radio in early August a Tongan Govern­ment warning to mariners of vol­canic activity in the vicinity of Late. No coordinates were given, but we assumed it was somewhere on the western volcanic line, an area which is generally avoided by sailors, but must be crossed when travelling from Tonga to Fiji.

Marine charts (from surveys done in 1898 by the surveying ship Penguin, with later corrections) show considerable volcanic activity along this line, e.g. “Volcanic activ­ity 1937”, “Volcanic activity 1999”. Unfortunately these charts, the only ones available for Tongan waters, are out by up to 800 metres east-west, and this inaccuracy is carried over into the navigational computer soft­ware used by most sailors. It was not unusual, after dropping anchor in a bay, to find the onboard computer showing us anchored on dry land, once even in the royal palace! More unsettling was having a near-miss with a coral reef we had expected to pass at a safe distance.

Soon after the radio warning we heard a transmission from Fiji-bound yachties who had been shocked to find themselves travelling through a sea of floating pumice at night. The yachties reported that the pumice field stretched a long way, and they were unsure of the shortest route through it. The gritty lumps scraped paint from their yacht’s bow and sides and blocked the filter to their water-cooled engine, forcing them to shut it down. Their toilet could not be used either because marine toilets are flushed by pumping seawater through them.

The eruption was a hot topic on the cruising radio nets for weeks, as yachties sought to avoid the pumice.

Kiwi sailors Grahame and Lynne Brown, returning home after nine years round-the-world sailing on Minaret, encountered sulphurous fumes “just like Rotorua” as they passed south of Late in mid-Sep­tember. Being heavier than air, the gas accumulated in the cabin where Grahame was sleeping. Again, they had the uncertainty of not know­ing if the fumes would get worse, and which way they should turn to escape. Though they had delib­erately avoided the main pumice rafts, Minaret’s paintwork was still damaged by stray pieces of pumice which had by then spread over a vast area of ocean.

The Browns had previously lived in Tonga, when they witnessed the 1984 eruption which gave rise to an “ephemeral island” on Home Reef. They were on Hunga at the time and, fearing a tsunami, hastily made for higher ground. There was talk of the King going out to claim this new, still-smoking island, but the pum­ice all washed away within a few months, and the ephemeral island was no more.

Much of this story did not be­come news until November 2006, three months after its actual occur­rence. On August 11, the Swedish yacht Maiken with Fredrik Fransson and his uncle Flakan Larsson on board had left Tonga for Fiji, and was probably the first to encounter the pumice raft. Fredrik wrote:

“…the whole horizon was a solid line to what looked like a desert… when we entered the solid field it started to pile up and behaved like wet concrete. The sight was unbe­lievable; it looked like rolling sand dunes as far as the eye could see. Our speed went from 7 knots down to 1 as the pumice stones dragged along the waterline.”

The pumice was so dense that the Maiken turned back to Vava’u, but not before they had taken impressive photographs, which they later posted on their blog.

Setting out again the next day, they skirted the edge of the raft towards smoke rising from the sea where, to their amazement, they witnessed the birth of Tonga’s latest island.

“We headed toward the southern part of Home Reef. The closer we came to the island the clearer the smoke stood out from the surround­ing clouds, and every so often a massive black pillar shot upwards to­ward the sky. You could see particles raining down…You could clearly see the three mounds creating a crater with one side breaking off opening up towards the sea. It looked like a big island made of black coal. We reached down and felt the water and it was warm.”

The new island was also seen by two Tongan fishing boats about this time, but it was not reported. On November 6, Matangi Tonga On-line reported: “Siaosi Fenukitau, a captain of one of the fishing boats of the Maritime Projects Co. (Tonga) Ltd., confirmed on Saturday, No­vember 4, that about six weeks ago they sighted a new volcanic island near Home Reef…Siaosi said that they tried to make radio contact with Nuku’alofa when they sighted the new island but they could not make contact with any government offices, and since then they had forgotten all about it.” It is equally curious that we did not hear of any reports of the new island from the pilots of Air Vava’u and Peau Air, which fly daily Nuku’alofa—Pangai—Vava’u. How­ever, having experienced the Tongan way of thinking and “island time” for months, I am not too surprised at this lackadaisical attitude to an event which most Kiwis would regard as newsworthy.

News of the island finally broke when someone read the Maiken’s blog. NASA contacted Fredrik Frans-son for the coordinates of the new is­land (18°59’4″S 174″45’4″W, accord­ing to RNZAF) and posted ASTER and MODIS satellite photos of it.

These fascinating photos show not only the island (approximately 1.6 km long) with its plumes of vapour and areas of hot discoloured water around it, but also the enormous pumice raft, smeared in a great, brown swirl across the ocean.

Different Drummer unwittingly had a close encounter with the then unknown island on September 20. We had set sail from Vava’u for the Ha’apais in the afternoon, intending to sail all night. However we soon ran into severe and worsen­ing weather. At nightfall, in 40-knot winds gusting 50 knots, and with a head-on sea, we decided to heave to. We were then about 22 km SE of Late, and overnight Drummer drifted some eight km NW. Being wary of the volcanic chain to our west, we got underway at dawn, motoring south-east. It was a stormy morning, and there was no reason to glance over our shoulders to starboard. Had we done so, we would surely have seen the plume of steam and smoke rising from the new island only 15 km away. We later found three small pieces of pumice which had washed on board during the storm.

The pumice raft continued to drift westward, clustering thickly on Fijian beaches. By then tiny gooseneck barnacles were growing on the larger pieces. And by December 2006, it had reached Vanuatu, some 1600 km from where it originated.

Meanwhile Tonga’s new island No. 170 is holding its own. When photo­graphed by the RNZAF on December 8, 2006 it was 450 m in diameter and up to 73 m high. It may survive, as did the island that formed at Metis Shoal in 1995, but it may yet wash away. And, with Nuku’alofa in ruins after the riots of “Black Thursday”, November 16, 2006, the new Tongan King, George V, has more on his mind than going out to claim another island for his unstable kingdom.