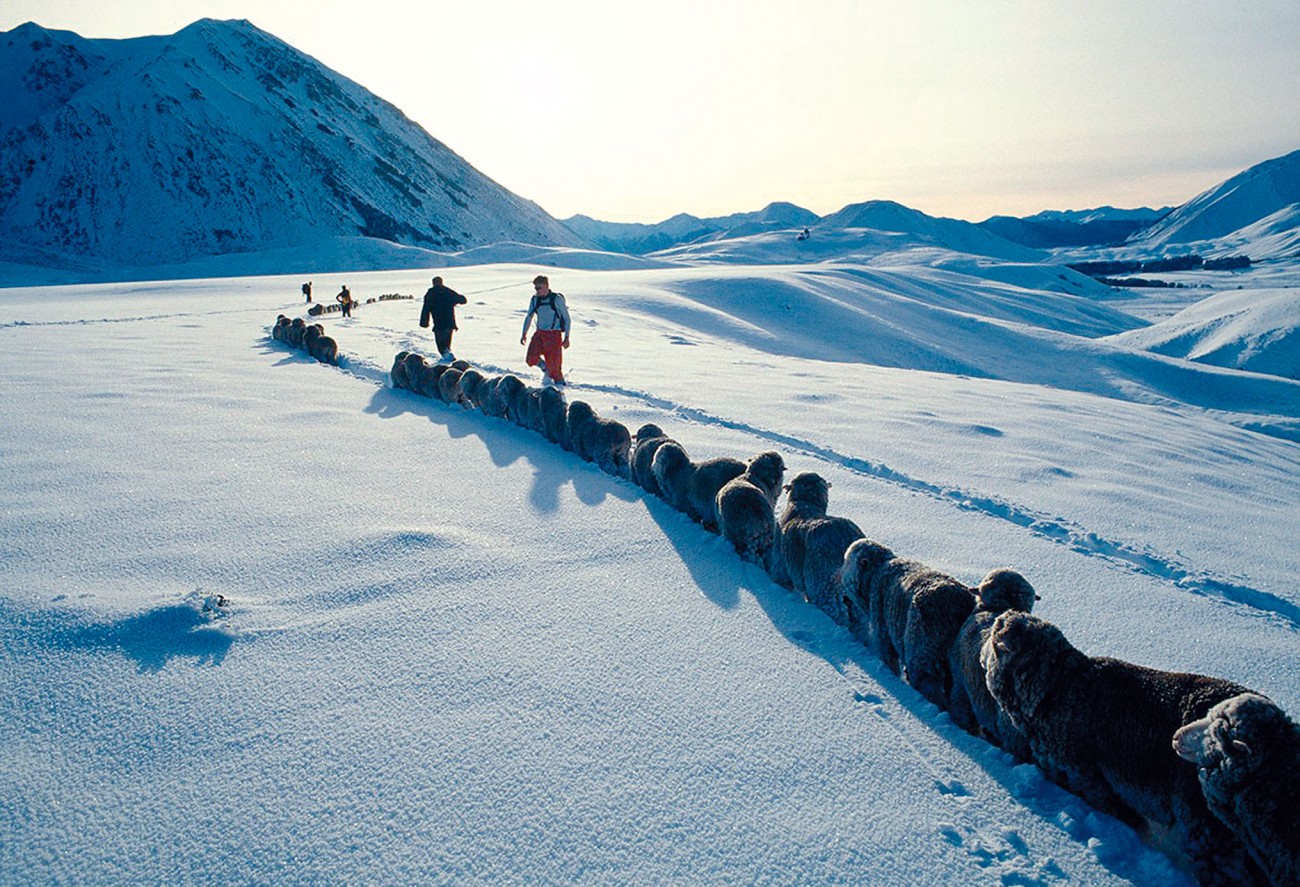 In the middle of September, cold air sliding down off the Antarctic Plateau punched into mid-latitudes south of Tasmania, swung around a deep low, then hit New Zealand from the west. Damaging winds brought down trees and power lines in many places, cutting electricity supplies to thousands of homes. Heavy snow clogged the mountain passes in the South Island, closing major highways. But the worst effects were in Southland, particularly on the 18th, when the wind turned southwest, driving snow into areas hitherto sheltered by the ranges. Records were set for coldest maximum temperatures in a number of places. That day, the temperature in Gore rose to only 2.5ºC, while Invercargill reached 4.1ºC, Balclutha 4.5ºC and Nugget Point 2.5ºC.

In Invercargill, snow was heavy enough to collapse several roofs, including Stadium Southland’s. Volunteers cleared snow from the rugby ground before Southland’s successful Ranfurly Shield defence against Auckland, invoking memories of the shield game against Manawatu in 1939 when 10 cm of snow fell and there was only time to clear the touchlines and goal lines. Southland won that game too.

The farming community was hit hardest. At the time of writing, the loss of lambs and ewes is estimated at half a million or more. Many calves also died, and dairy farmers had to dump milk when roads became impassable to tankers. In particular, the duration of the strong cold winds over many days took a deadly toll on stock. Coastal Southland got the worst of it. Cold rain and snow showers were so frequent in Invercargill that the total precipitation for the month was the highest ever recorded there for September.

The persistent westerlies also brought record monthly totals of rain to western parts of the North Island such as Te Kuiti, Taumarunui, Hawera, Whanganui and Palmerston North, causing losses for farmers in these areas too.

Weather disasters have always been a hazard for agriculture in New Zealand. One of the earliest accounts of farming in the South Island is Lady Mary Anne Barker’s book Station Life in New Zealand. The most remarkable weather event in her book is the snow storm of 1867. Starting on July 29th, it lasted six days. Their farmhouse, situated near the Selwyn River upstream from Glentunnel, was almost completely buried in snow. The only outside door that could be opened was the one from the kitchen, which fortunately opened inwards. From this, a passage was maintained through the snow. No sheep or lambs could be seen by the first morning, though they had drifted down off the hills in their hundreds before the snow started.

On the fifth day, the men sallied out into the storm to dig out some cattle. They were dragged to a space the horses had kept clear by walking, although it was surrounded by walls of snow.

After six days, the snow stopped falling, there was a heavy frost, then rain began. The occupants of the homestead had run out of food and firewood, but as the level of the snow reduced under the influence of the rain, an expedition to uncover the fowl-house was finally successful. After breaking through the roof, the men were able to extract a couple of starving chickens. Further digging in the snow yielded two fence rails for firewood. The thin chicken soup they cooked was the first half-decent meal they had had in days.

The snow was further reduced by a warm northwest wind blowing the next day. The following day—eight days after the storm started—it was finally possible to try to help the sheep. First, the sheep dogs had to be dug out of their kennels, but they helped by digging up towards their rescuers. Lady Barker joined the rescue party, sinking waist deep in the snow at times.

Most of the sheep had sheltered in gullies and creek beds while the snow piled over them metres deep. Although initially safe in snow caves made by their own body heat, many were trapped and drowned as the flooded creeks rose under the snow. Digging for survivors, Lady Barker found two dead ewes leaning against each other, forming a kind of tent over their lambs, one of which had survived while the other froze to death.

Thousands of sheep and lambs were saved, but around half the farm’s animals perished. The financial loss convinced Lady Barker’s husband, Frederick Broome, to sell his half share of the run to his partner and return to England, where he took up a career in journalism. At the suggestion of a publisher, Lady Barker retrieved the letters she had sent to her sister and edited them into Station Life in New Zealand, which became a bestseller.

Encouraged, she wrote another book based on some of her experiences travelling in India with her first husband, George Robert Barker, an artillery general. This included a vivid description of being caught in a fierce cyclone in the Bay of Bengal. The steamship she was on was badly damaged after three days of battering from hurricane-force winds and giant waves and had to be towed into port with a bad list.

More travels and more books followed when Broome, whom she married four years after her first husband died, took up a series of appointments with the Colonial Service. Drought and violent thunderstorms featured in her writing about South Africa, and there was another encounter with a hurricane, this time in Mauritius when they were battened down for three days behind storm-shutters as the wind toppled chimneys and stripped the vegetation bare. Their longest stay was in Western Australia, where her husband was Governor for five years and several places were named after family members, such as the town of Broome.

Lady Barker’s achievements can be read in detail in Betty Gilderdale’s biography, The Seven Lives of Lady Barker.

The 1867 snowstorm in Canterbury was said to be worse than any that local Maori could remember. It is interesting to speculate that but for this storm, Lady Barker may never have left New Zealand and embarked on her writing career. Whether September’s storm launches someone on a writing career, we will have to wait and see.