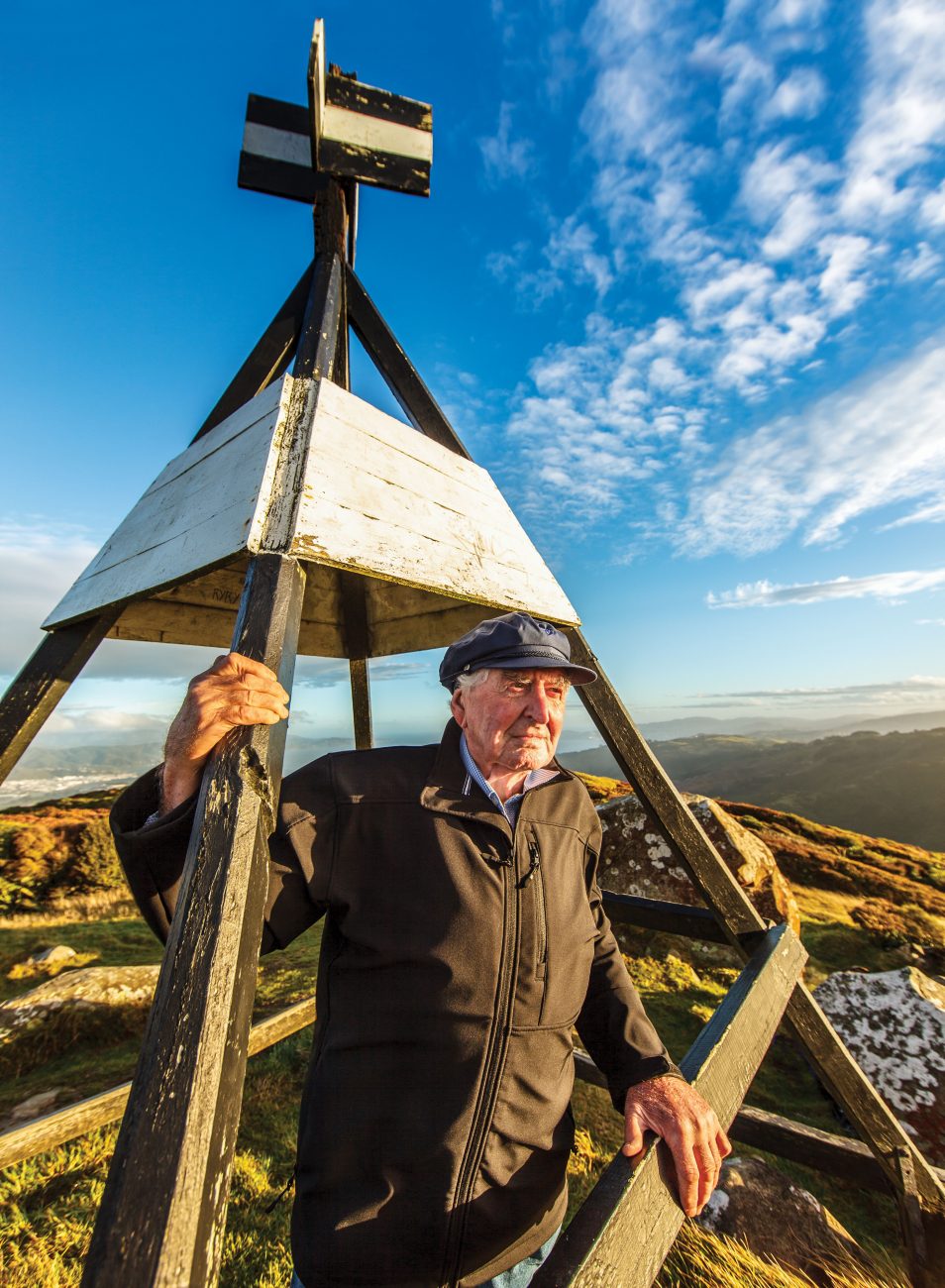 When Bill Robertson was a kid, maps of Fiordland still contained blank areas with ‘unexplored’ written on them. But he grew up in a better-charted place—the North Bank area alongside the Wairau River in Marlborough, under the shadow of Mt Richmond—though it was sparsely populated. There were still blue ducks and parakeets to be spotted up near Lake Chalice, and his school, Pine Valley, had just nine pupils of various ages on the roll. Much of his schooling was through correspondence. When he finished, he was taken on as a cadet by the old Department of Lands and Survey, where he was trained by a master surveyor.

“I was good at trigonometry and off a farm, used to going up hills,” he says. “It was a natural fit.”

Surveying has been described as ‘maths outside’, and accurate parcelling of land—critical for both private and public lands—forms the basis of our land-tenure system.

One of Robertson’s first tasks was to eye up two rail routes through the Richmond Range, between Nelson and Blenheim—a 1957 election promise by the Labour Party—which involved driving a short-wheelbase Land Rover with a rifle in the cab in case the odd deer or goat was spotted along the way. At the time, surveying still relied on lugging optical theodolites up to high points and triangulating off known points. Electronic distance measurement was in its infancy and involved a Tellurometer—a large box mounted on a tripod and powered by a heavy 12-volt truck battery, which measured distances using microwaves.

After that, Robertson was posted to Dunedin, from where he was assigned to go over ground in Central Otago originally covered in a marathon reconnaissance survey by John Turnbull Thomson, the chief surveyor of Otago, in 1857 and 1858. He was recalculating the underlying figures for an inch-to-mile map series, part of a huge effort to publish medium-scale topographic maps for the whole country. The first was published in 1939, the last in 1975. He also took on odd jobs, such as legalising road access up to Coronet Peak, and surveying reserves around the shores of lakes-to-be, such as Benmore.

“In winter we worked the field from 10am to 3pm,” he says. “You couldn’t drive in survey pegs in frozen ground. At night we would bring in the surveyors’ peg bar and put it by the fire.”

He got four days’ notice to move to Auckland and complete a town-planning diploma, then it was off to Sarawak with his wife and son, where he and a colleague trained Malaysian surveyors as part of New Zealand’s overseas aid programme.

“They provided buildings and students and we brought equipment and tutors,” he says. “We did a lot of sun shots—as in the jungle you often couldn’t see the trigs.”

In the 1960s, Robertson combined his planning and surveying skills in order to identify many of the reserves that make up the Hauraki Gulf Maritime Park. The Auckland coastline was changing, thanks to ribbon developments and subdivisions close to pristine beaches. A nationwide survey aimed at identifying high-value coastal areas for possible protection ensued, with Robertson scouring topo maps and aerial photos. A major coup, he says, was getting government commitment to establish a $1 million-a-year fund to purchase land in the 1970s.

Robertson also questioned the prevailing orthodoxy of planning, which involved deciding everything in advance. The 1953 Town and Country Planning Act was the epitome of prescription, he says, “down to the nib size on your pen for maps”, while national park documents detailed where huts and roads were going to be in 30 years’ time. Robertson didn’t believe in having an immutable master plan.

“We said, think more in terms of what values you want to protect, rather than detailing the unknowable future.”

After a stint in Wellington as Acting Surveyor-General, Robertson provided advice to the United Nations on contested boundaries in conflict areas, such as the region between Iraq and Kuwait—low-lying terrain comprising burned-out tanks, mines and sand. In his work in the Middle East and Africa, vague old agreements and letters were dusted off. In some cases where things weren’t clear—such as a contested swamp between Cameroon and Nigeria—it was a case of splitting it down the middle.

Robertson’s lasting legacy is contributing to how we see Te Ika-a-Māui, Te Waipounamu and Rakiura—the North Island, the South Island, and Stewart Island. In 1990, he helped to publish He korero pūrākau mo ngā taunahanahatanga a ngā tūpuna: Place names of the ancestors, a Māori oral history atlas, which saw the land anew and recognised the importance of landscape names for iwi. The New Zealand Geographic Board/Ngā Pou Taunaha o Aotearoa subsequently reinstated many original names.

Robertson himself became a place name, being honoured by the Robertson Massif in the Ross Dependency for his contributions to Antarctic surveying and mapping. Working with the United States Geological Survey, he’d developed a successful mapping and geographical naming programme for the McMurdo Dry Valleys.

Technology changes. Culture changes. But the land remains—and thanks to the groundwork laid by this country’s surveyors, its topology, topography and whakapapa are now freely available on your phone.