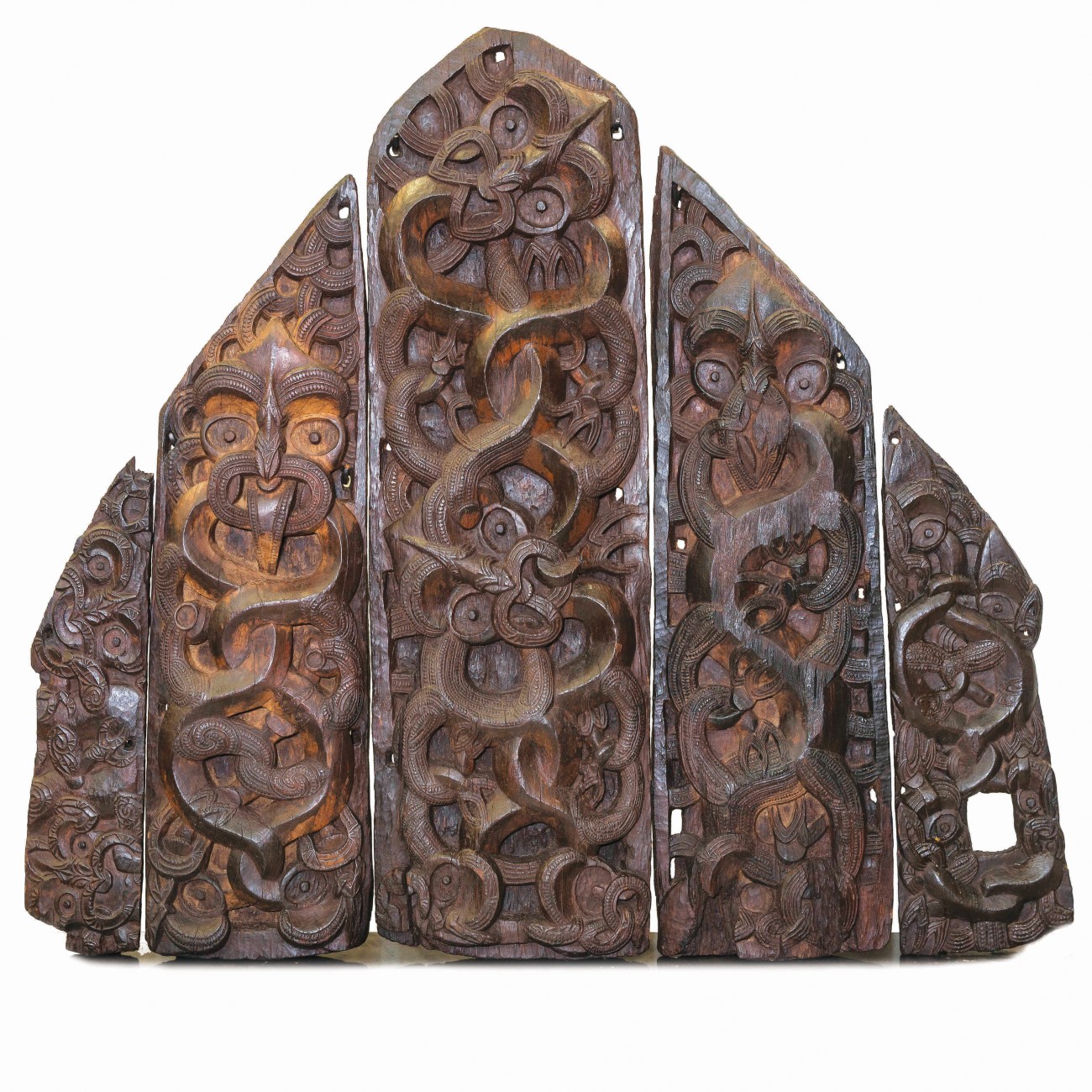 In 1972, a man was cutting a path through a swamp near Motunui when he noticed a slab of wood that looked too smooth to have been formed by nature. Wiping away the mud, he uncovered an intricately carved epa, a wooden panel. The man—known only as Manukonga in court documents—kept digging, and found four more, which fitted together in a triangle shape.

They had been crafted in the late 18th or early 19th century to form the back wall of a Te Ātiawa pātaka, or storehouse. Since the pātaka held the community’s riches in the form of food, it was graced with the iwi’s artistic wealth as well. The epa had probably been hidden in the swamp during a time of warfare—a common practice in order to avoid iwi treasures falling into enemy hands.

Manukonga promptly sold the panels for $6000 to an English antiquities dealer, Lance Entwistle, who shipped them to New York. The following year, Entwistle sold them for US$65,000 to Swiss art collector George Ortiz, allegedly with false documents of provenance.

While Ortiz’s collection—and the legality of his obtaining it—remained a source of controversy, no one could fault his eye.

The Motunui panels are regarded as a masterpiece of Māori whakairo—carving—and are one of the few surviving examples of the unique North Taranaki style.

“The serpentine figures—they’re almost eel-like, they curve and twist along the panels,” says Kelvin Day, director of the Puke Ariki gallery in New Plymouth. “These have a fluidity about them—there’s a sense of movement, much more so than in other regions, where the style can be described as more square.”

The New Zealand government discovered the existence of the epa when Ortiz’s six-year- old daughter was kidnapped in 1978. To raise the US$2 million ransom for Graziella’s safe return, Ortiz consigned the epa to Sotheby’s to be auctioned, along with more than 200 other works from his collection.

Taranaki Museum director Ron Lambert noticed the sale and alerted the New Zealand government, which formally sought the return of the panels. The epa were withdrawn from the auction pending judgment, but Ortiz made enough money from the other items and decided against selling the panels. (They never rejoined his collection, and were sequestered in a Geneva warehouse.)

The New Zealand government’s case reached the House of Lords in 1982. While it failed, it eventually led to the creation of a UNESCO convention for preventing the illegal transfer of cultural and historical objects, which has since been signed by 127 countries.

The government again attempted to negotiate the return of the panels in 1985, 1995, 2005, 2007, and—crucially—2014, after Ortiz’s death. Finally, Ortiz’s children sold the panels to New Zealand for $4.5 million. Last month, they were unveiled at Puke Ariki, where they are displayed inside a pātaka— returned, more than a century later, to their intended purpose.