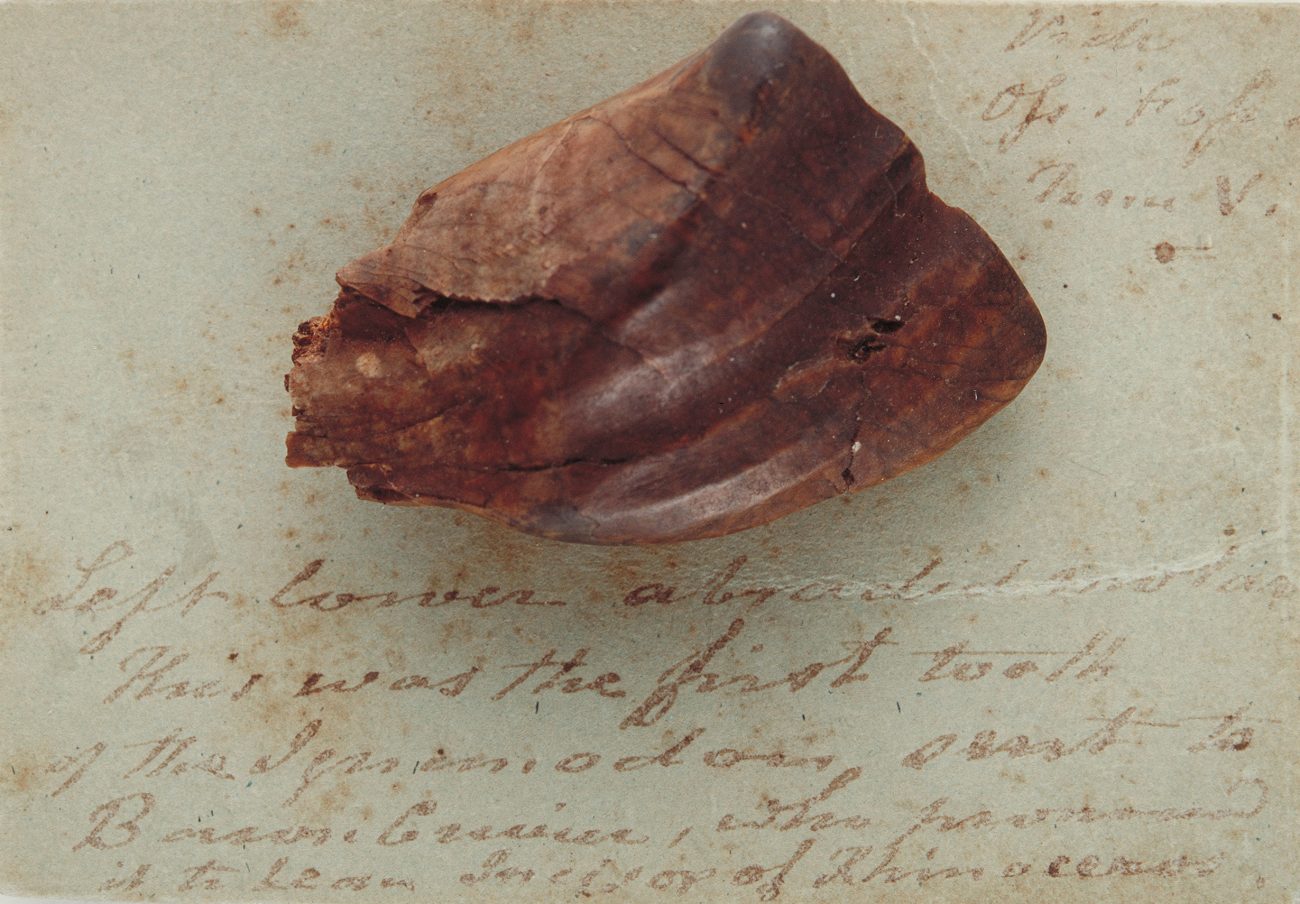 Few natural antiquities have captured the human imagination the way dinosaurs have. Sixty million years after their demise and 160 years since they were first described by science, curiosity about the ruling reptiles remains intense. Now it turns out that the fossil that sparked off all the  interest resides in New Zealand.

That fossil is an Iguanodon tooth discov­ered in a quarry near Cuckfield, Sussex, by a country doctor and his wife, Gideon and Mary Mantell, in 1820. Today this treasure is on display in the 4th floor Discovery Centre of the Museum of New Zealand Te Papa Tongarewa, in Wellington.

Mantell recognised the tooth as being from a herbivore, probably a reptile, and maintained that it came from Cretaceous rocks. Although correct on all counts, he was derided by much of the scientific establishment. At the time the only large herbivores known were mammals, and mammals didn’t exist in the Cretaceous.

Mantell named the creature Iguanodon on the basis that, of all teeth he could find, both recent and fossil, his tooth most closely resembled that of an iguana. Later fossil finds showed Iguanodon to have been a six-metre­long herbivorous dinosaur that probably walked on its two back legs.

Nothing like this dinosaur is known from New Zealand, but a few close relatives such as Muttalmrrasaura have been found in Australia. Fossils of fewer than 10 species of dinosaur have been found in New Zealand, from only two localities, both in the North Island. One is in 150-million-year-old Late Jurassic rocks near Port Waikato and the other is in inland Hawkes Bay, in Late Cretaceous rocks, about 85 million years old (see New Zealand Geographic, Issue 19).

And how did New Zealand come to possess this palaeontological “holy grail”? On his death in 1852, Gideon Mantell’s estate passed to his sons, one of whom—Walter—had settled in New Zealand in 1840. Walter became Postmaster of Wellington, learned Maori, and in 1848 was appointed Commissioner for Extinguishing Native [land] Titles in the South Island by Governor George Grey. As commis­sioner, he attempted to establish reserves for Ngai Tahu—as specified in land purchase agree­ments—but the government rejected his proposals. In 1855, he even returned to Britain to seek support to get the promised reserves set aside, but failed there, too.

He entered politics and became Minister of Native Affairs in three governments, but still never had his reserves accepted—an injustice that caused him much sorrow.

Natural history was dear to Mantell’s heart, and he collected many moa and other bird bones and shell fragments, some of which he sent hack to his father in England. The takahe, Notorn is mantelli, was discovered by, and named after, him.

Mantell Sr, in turn, sent much fossil and rock material to his son. It is likely that Walter brought the tooth to New Zealand in 1860 and deposited it in the then Colonial Museum in 1865, along with a number of other specimens which had belonged to his father.

The Mantell family donated more material to the by then Dominion Museum in 1930, and the Auckland City Library contains proof copies of a number of Gideon Mantell’s books. These were apparently given to George Grey by Walter Mantell, and later passed with many of Grey’s books to the Auckland library.

Although most of Mantell’s specimens are not on display at Te Papa, that first Iguanodon tooth is there for the world to marvel at.