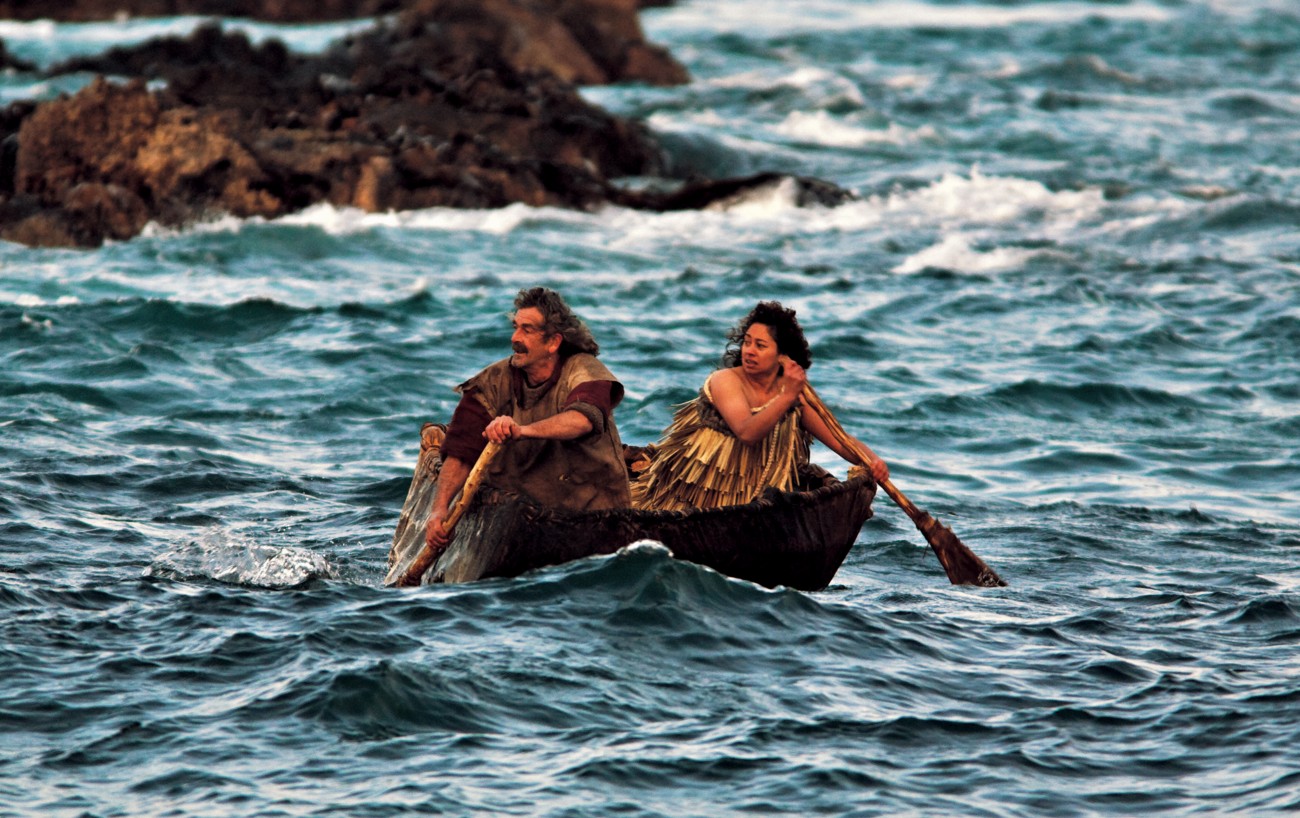 Jacky Price had a problem, a big one. He shouldn’t have stolen those stashed seal­skins. At least, he should have never let him­self be caught doing it. Alas, it was too late and now the enraged owners of the treasure made sure he had plenty of time and space to ponder his sins. And that he would not be tempted again, not anytime soon.

To this end, they had unceremoniously dumped him and his wife Hineawhitia, daughter of the chief Te Pahi, on the most god-forsaken place they could think of: Solander Island, a storm-battered whale-tooth of a volcanic rock smack-bang in the Roaring Forties. In a direct line it was some 22 nautical miles back to the mainland but there was no hope of ever making a bee­line across the Foveaux Strait, some of the roughest seas on earth. Both Jacky and Hi­neawhitia knew what happened to the last party of sealers marooned here in 1808. They were not rescued until 1813.

Still, they did not despair. There was good shelter on the island’s east side, the Sealers Cave, plenty of fat tucker—seals and alba­trosses—and there was timber for firewood. Thus Jacky and Hineawhitia began hatching an escape plan.

It was desperate at best, but some time later they were ready, their escape craft bobbing among the beds of kelp. It was the most fragile looking thing, a coracle made of driftwood and sealskins, waterproofed with animal fat, barely bigger than a bathtub. They picked the day when they thought the weather would be kindest. Then they pad­dled for the mainland.

The story of Jacky and Hineawhitia is only one of the remarkable tales now told in the newly-open Heritage Centre and Museum at Riverton, a community driven and manned project. “We’ve tried to bring Riverton’s his­tory alive again,” said Dave Asher, one of the project originators. Local iwi, Oraka-Apari­ma Runaka, particularly brothers Ron and Stewart Bull and their sister Nan Barrett, have been especially helpful. Flax muka costumes were woven by Wini Solomon, a talented lo­cal traditional weaver, and many others have also helped. They have certainly succeeded. Some of the display mannequins have been made by Peter Jackson’s Weta Digital. They are so lifelike that touching them, you’re sur­prised to find their skin cold.

Formerly a Southland engineer, now a film-maker, Asher is best known for his vid­eos of New Zealand’s back country and its people. Some of his films, like The Last Great Adventure, Good Keen Men and The Veni­son Hunters, have achieved an almost cult status. Not surprisingly, the anchor point of the entire museum is one of Asher’s docu­dramas featuring several episodes from the area’s history set against spectacular flyo­vers of the wild coastlines and islands. A black-and-white sequence of whalers in a skiff, made fast to a whale and racing across the huge swell—rope smoking on the bol­lard, unabashed fear etched on the men’s faces—is particularly memorable. The film is shown in a theatrette stylised into the aft deck of a wooden ship, with a screen com­ing down from among the rolled-up sails. Add the booming soundscape of the South­ern Ocean and the sensation of being out there is complete.

Riverton’s residents are quick to point out that theirs is one of the oldest towns in the South Island, and a frontier town at that. Despite its tempestuous seas, southern Maori had always favoured the area for it was an unrivalled source of kai moana, particularly the titi, the mutton birds which come to nest on the outlying scrub-covered islets after their remarkable around-the-world migration. (Recent tagging experiments have shown that birds breeding in New Zealand may travel 74,000 km in a year, reaching Japan, Alaska and California, averaging more than 500 km per day.)

The first Pakeha settled in the earliest 1800s, and they were mainly sealers migrat­ing from the exhausted seal rookeries of Bass Strait, between Tasmania and mainland Aus­tralia. There was bloodshed and cannibalism in the 1810–11 period over unauthorised sealing, bloody massacres of sealers in 1817 around Otago harbour and further blood­shed and utu in 1822–23 until a peace ac­cord. But things settled down.

The blending of cultures at Riverton went on relatively peacefully, with both Maori and Pakeha coexisting, eking out a living from the unforgiving sea. The sealers and whalers began to marry into the tribes and the Maori were quick to benefit from trade, muskets and superior seacraft like whaling skiffs. Over the ensuing decades this proc­ess of cultural mixing produced some col­ourful bloodlines. For example, a Colac Bay publican now proudly introduces himself as a “Portuguese Maori from Codfish Island”. The early mixed marriages and the children they produced became the key to peaceful and harmonious race relations and trade in Southland.

Once the seals were gone—within a few years—the migrants’ attention turned to whaling. In December 1845 Ruapuke Island’s resident missionary, Rev. Wohlers, wrote: “A considerable number of Euro­pean men live on the shore of the region, and from the whaling ships that stop, more and more people remain here who like the freedom of this country. All of them amal­gamate with the natives and from this a new race is emerging, which will probably devour and fuse with the remainder of the pure natives.”

In the same year, Dr Edward Shortland, Protector of Aborigines to the New Zealand Government, added this observation: “The most westerly of the whaling stations…and the last which we visited was Aparima [to­day’s Riverton]. This is a small bar harbour, capable only of admitting vessels of some 20 to 30 tons. The huts of the residents were built on the southern slope of some well-wooded hills, and being white-washed, and having near them green enclosures of corn and potatoes, presented, while shone on by the morning sun, the most smiling and re­freshing aspect imaginable. In my mind I at once pronounced it to be one of the loveliest spots in New Zealand.”

Though Maori and Pakeha continued to live in relative harmony, this was soon shadowed. Not by conflicts but by plagues. Measles, influenza and tuberculosis, against which the Maori had no natural resistance, devastated their population.

In August 1835 alone, hundreds had died, including the chief Te Whakataupuka. Waves of the epidemics continued to wash over the southern shores—in 1838, 1840, then again in 1858. They caused the chief Tuhawaiki to lament: “We are but a poor remnant now, and the Pakeha will soon see us all die out, but even in my time we were a large and powerful tribe…We had a worse enemy than even (Te) Rauparaha [whom they successfully repelled with the newly-acquired muskets] and that was the visit of the Pakeha with his drink and his disease. You think us very corrupted, but the very scum of Port Jackson shipped as whalers or landed as sealers on this coast. They brought us new plagues, unknown to our fathers, till our people melted away.”

Still, those who survived the plagues prospered. In 1857, Surveyor John Turnbull Thomson, reported: “On my late visits to Jacob’s River, more proofs of comfort were to be noticed than any other part of the prov­ince outside of Dunedin, the capital. The in­habitants both Native and European, possess abundant supplies of wheat, potatoes which they have grown. They have plenty of pork in their enclosures and fish for the trouble of catching them, while the wealthier pos­sess large herds of cattle and flocks of sheep feeding on the extensive pastures surround­ing the village.”

Notable from the very beginnings too, was the frontier town’s free spirit. Thomson mentions that arrivals of American whalers looking for fresh provisions were always an opportunity for “quick traffic in things con­traband”. He also added: “So much are the inhabitants attached to free trade that, on an exciseman being seen in the village, all the houses were shut, locked and barred.”

Oh, those were the days.

You can glimpse many snapshots from those times walking the display rooms of the new museum. There is a section on the largest community of Chinese goldminers in the country, the story of 16-year-old James Caddell, who in 1810 was kidnapped near Stewart Island’s South Cape by a band of Maori warriors, and who was miraculously spared and accepted into the tribe to be­came Southland’s first Pakeha Maori, teach­ing his new whanau the ways of the musket, leading them on raids on sealers until a trade deal was reached in 1822.

There is also a story of a cooper who brewed his own cabbage-tree rum. His lost art is about to be revived. This bottled “taste of the old Riverton”—not unlike its Gore counterpart Hokonui Moonshine—will be available through the museum’s souvenir shop. Apparently, it’s just the thing to ward off the South Coast chill.

What happened to Jacky Price and Hi­neawhitia? Eventually they made it to the mainland but they did not dare to return to their home, perhaps in fear that the offended sealers would relocate them again, this time somewhere even more remote. Instead, they went to live in a cave in south-west Fiord­land and continued sealing until Jacky’s death in 1829. The replica of their coracle is one of the new mu­seum’s choicest exhib­its. It’s seaworthy, too. It’d only need another southern man and woman to paddle it from Solander again.

In a way, Jacky and Hineawhitia’s extraor­dinary feat set the tone for how things are done in Southland­ quietly and together, without fanfares but with maximum com­mitment. That a com­munity of 1900 peo­ple could raise some $400,000 to self-fund the project is remark­able enough. But the fact they’ve built some­thing so significant and worth visiting is an indication of how keen they are to have their stories told.

Robert McKee, perhaps one of the world’s greatest authorities on the craft and essence of screenwriting, once said that: “A culture cannot evolve without honest, pow­erful storytelling.” Obviously, the people of Riverton have understood that. The quality of the new museum is clear proof of that.

There are many more tales worth telling from this land’s end jutting into the Southern Ocean. About the fishermen of the fiords, the paua divers of Foveaux Strait, the Cod­fish Island kakapo. About modern-day he­roic feats, like that of the diminutive Jacinda Amey who, on 24 April 1992 off the coast of Campbell Island, swam out to rescue me­teorological officer Mike Fraser, bleeding to death after a great white shark tore off his forearm. Amey received the New Zealand Cross, the highest award for civilian bravery, though in Southland they take such things with quiet understatement. All in a day’s work, they’d say.

After the construction dust has settled and the nervousness of the museum open­ing subsided, Asher, the Heritage Commit­tee and the rest of the team just might start thinking about building an extension to have these other stories told as well.