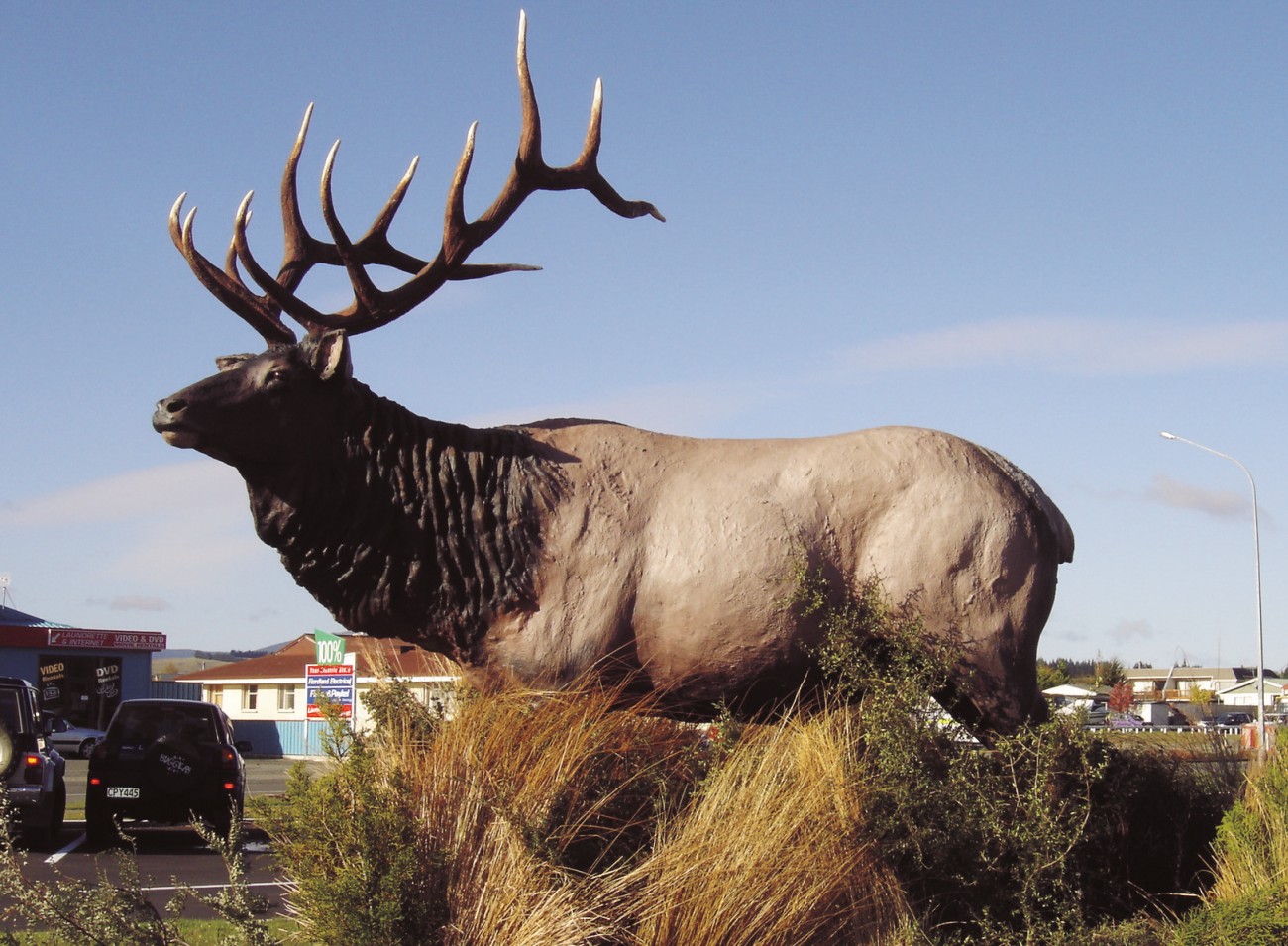 High above the bush-line in north-eastern Fiordland during late March and early April the screaming bellows of wapiti bulls echo across the tus­sock. The bugle, as it is known, is a challenge to other bulls for harems of cows and a rallying call for hunters.

When President Theodore Roo­sevelt of the United States made a gift of wapiti to the people of New Zea­land in 1905, he unknowingly set the scene for a bitter war that has lasted 100 years. On one side are hunters, who insist deer can be managed with minimal impact on the native ecolo­gy. On the other are conservationists, who see all deer as a threat to New Zealand’s native forests. The philoso­phy of the conservationists reflects the much-criticised National Biodi­versity Strategy of the early 1990s, which, in spite of intense lobbying, ignored all exotic wildlife apart from those species already protected by the Wildlife Act—that is, game birds and sport fish. The strategy sets the pattern for the Department of Conser­vation’s (DOC) formal Statement of Intent and guides its activities.

For the past 50 years, hunters and conservationists have shouted past each other with little hope or intention of ever finding the middle ground. Caught between them have been government ministers and their departments bound by the constraints of law, trying to keep most people happy most of the time but never quite succeeding.

On the eve of the centennial of the wapiti’s introduction to Fiordland, one final attempt will be made to convince the minister of conservation to give the remnants of a once-exten­sive herd some protection for trophy hunters. Such is the importance to hunters of this almost mystical animal that members of the fraternity have erected a statue of a magnificent mature bull in Te Anau.

During the 10-yearly review of Fiordland National Park’s manage­ment plan, started by DOC in 2002, the fate of wapiti has emerged as one of the most hotly debated issues. The new draft plan proposes the removal of the last vestige of protection for the species by allowing commercial meat hunters open access to the herd. Hitherto, a condition of a commercial meat hunter’s permit to operate in Fiordland has been a restriction on the wapiti it can take.

The final draft, which has yet to be released for public consulta­tion, could include a proposal by the Fiordland Wapiti Foundation to have the animal again placed out of bounds to meat hunters. The founda­tion suggests the impact of deer on native forest could be reduced by selectively removing red deer from the wapiti area. In return, it would want wapiti to remain as a purely sport-hunting resource.

This is a major shift of focus by the hunting lobby and comes as close as is legally possible to management of an exotic game animal in a national park. The foundation suggests that if hunters choose not to shoot wapiti during red-deer culling operations, yet there is still a reduction in the measurable impact of deer on the native forest, there will be nothing improper or unlawful about the initia­tive. What level of impact reduction will be required and how it will be measured have yet to be decided, but the foundation’s submission is likely to be accepted by DOC’s Southland Conservancy. There is no doubt, however, that if there is no reduc­tion in deer impact, the department will return to treating wapiti as just another pest.

New Zealand is probably the only place outside the wapiti’s native North America where the deer is known by its Inuit name. In most other parts of the world it is known as elk. It is the largest deer in New Zealand, the bulls measuring up to an impressive metre-and-a-half across the shoulder and weighing up to 320 kg. These massive animals provide trophy hunters with the ultimate challenge.

From the beginning, wapiti have been a source of conflict. In spite of early legal protection, one bull was shot by a poacher within five years of the first release in George Sound. For the next three decades the herd was left to increase, protected by law and free of predators and competi­tion. But threats soon emerged. First was the arrival in Fiordland of red deer. These smaller cousins of wapiti had established huge feral popula­tions in most parts of New Zealand and started colonising Fiordland in the early 1930s. Being closely related, the two species soon interbred, to the consternation of hunters who wanted a purebred wapiti herd.

Red deer had by this time be­come a serious threat to the integrity of New Zealand’s forests, and the former Forest Service started culling operations. Equipped with military Lee-Enfield .303 rifles, army camping gear and little else, deer cullers would survive on limited rations in rough country for weeks on end, and their stories are now part of New Zealand folklore. No exception was made for wapiti, 100 of which were shot by cullers in 1938.

The second blow for wapiti came a decade later with the discovery of takahe in a remote Fiordland valley. This heavily built flightless relative of the pukeko had been thought extinct until a small population was found in the Murchison Mountains. The Wild­life Service set aside the Takahe Area, and government shooters destroyed over 100 wapiti–red-deer hybrids there. Today this is still the only area in Southland where DOC undertakes deer control. The only other controls on deer numbers are commercial meat hunters, responsible for the ma­jority of animals shot when prices are good, and recreational hunters.

In 1952 the wapiti’s legal protec­tion was removed, and four years lat­er the species was listed, along with all other deer, as a noxious animal to be exterminated wherever possible. This made it an irresistible target for professional meat hunters when feral venison was attracting high prices on European markets in the 1970s.

Although the Fiordland National Park Board of the time operated ballots for hunting blocks, mostly to ensure equity of opportunity and hunter safety, meat hunters blatantly ignored the system. Hundreds of deer, including wapiti, were taken out by helicopter in what became known as the deer wars. Government departments couldn’t legally protect wapiti or other deer, but breaches of the hunting-block system were taken seriously and park rangers and meat hunters engaged in a game of hide-and-seek among the craggy moun­tains of Fiordland for several years.

As the conflict grew increas­ingly dangerous, some helicopters returned from meat-hunting ex­peditions with bullet holes in the fuselage. At one stage the air force was called in to detect poachers, but professionally trained pilots flying large military helicopters were no match for the “chopper cowboys”, with their unequalled experience of Fiordland’s steep terrain. No appre­hensions were made and the conflict grew deeper and more dangerous. It didn’t end until a meat-hunter pilot died when his machine plunged into Lake Te Anau during a night-time animal-recovery operation.

The net effect of so many deer being removed from Fiordland during the 1960s and 1970s was a dramatic recovery by the forest.

In 1981 the government made an effort to change how the impact of deer in the park was managed and agreed to relocate an improved wapi­ti herd to somewhere less contentious than Fiordland while significantly reducing red deer numbers. The move was intended to pacify both hunters and conservationists. Hunters were divided over the idea, but by this time the genetic influence of red deer on the wapiti herd had become a problem for those who still wanted purebred trophy animals.

There was also big money in farmed deer, and several hundred wapiti were caught and farmed on government land near Te Anau as the Crown Wapiti Herd. When financial returns from the operation declined, the herd passed to a hunter group, which inexplicably agreed not to re-introduce the animals to Fiord­land. This may have been intended as an interim goodwill measure, but in 1987 the government decided the Crown Wapiti Herd should never be returned to the wild. Over 20 years on, that decision is still regarded by many hunters as an unforgivable betrayal. The Fiordland Wapiti Foun­dation still owns and farms a herd of about 80 wapiti near Te Anau, which may be the only purebred animals left in New Zealand.

Feral-venison prices have been too low over the past four years to inter­est commercial hunters, DOC doesn’t undertake large-scale culling opera­tions, and deer numbers have again increased, raising fears that Fiordland could once more be on the verge of another cycle of serious forest dam­age. A survey by veteran deer hunter Colin Davey of Rotorua shows areas all but denuded of native vegetation by deer in the 1960s now covered with healthy regrowth, while fewer animals has also meant improved trophy heads for hunters. But for how much longer?

The new initiative will be a bold shot with a lot riding on it. If the proposal is accepted but hunters fail measurably to reduce the impact of deer on the forest in the wapiti area, it will probably be the last chapter in the wapiti story. On the other hand, should they succeed it will be a win for them and for conservationists alike. Many see it as a shot worth taking.