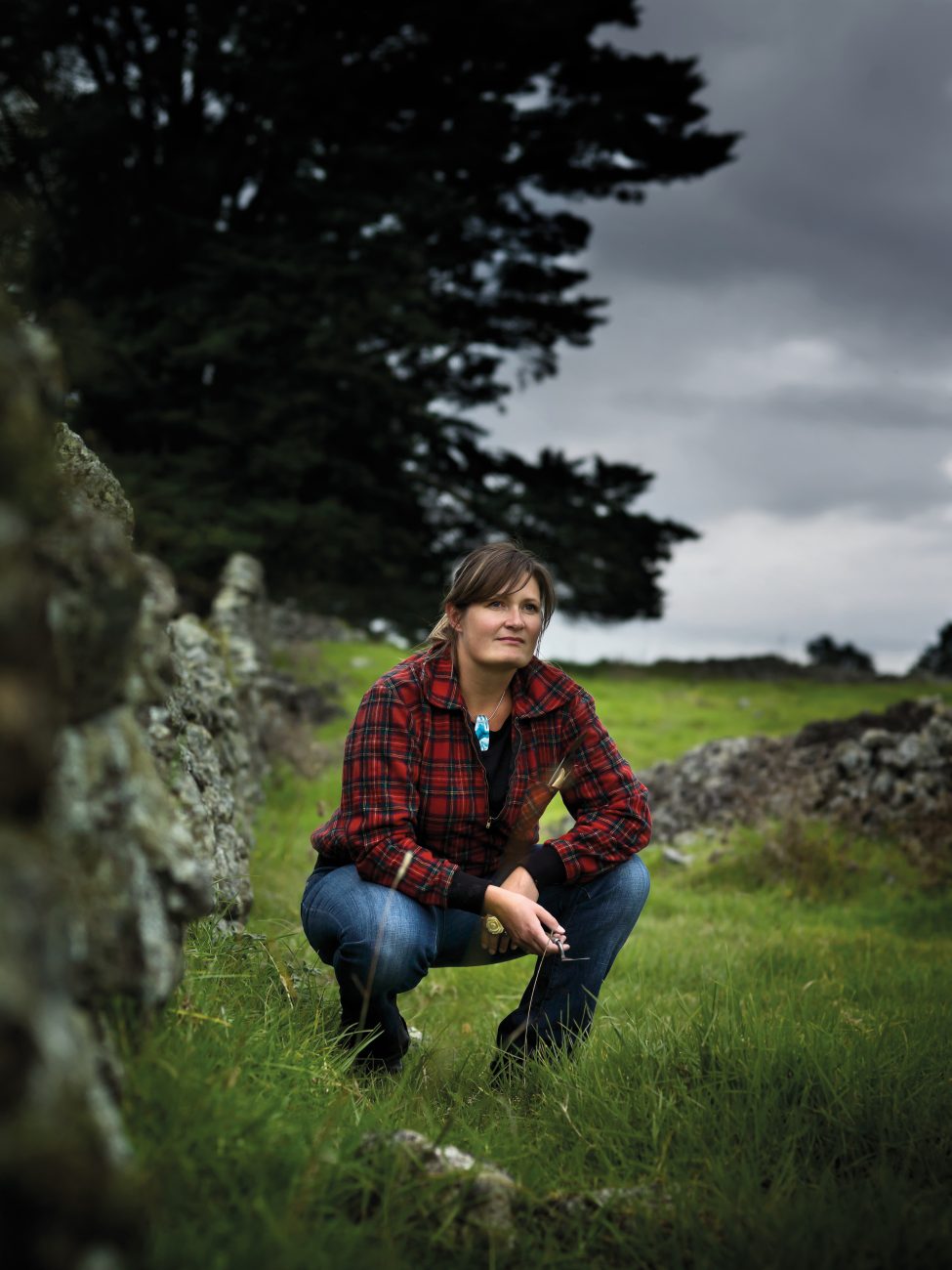 Ever felt the urge to hunt for treasure in the grounds of Buckingham Palace? Or dreamed of rediscovering a lost medieval priory, or lifting and conserving the earliest evidence of ‘basketry’ in Ireland? Archaeologist Brigid Gallagher, recently back in New Zealand after an 11-year stint in Europe, has done all that and more.

As co-presenter of Britain’s popular Time Team television series for seven years, she was also a member of the various teams of specialists who retrieved Mesolithic fishnets in Ireland and unearthed the Augustinian Priory of St Peter and St Paul at Taunton in southwest England. And she had a hand in excavating a Roman frontier settlement near Hadrian’s Wall and finding evidence of Ogham—an early medieval alphabet—on the Isle of Man. That televised dig in the Queen’s backyard was successful too—among items prised from the ground was a diamond earring.

For a time, Gallagher was lead conservator at the world’s oldest and largest Neolithic site, Çatal Hüyük in Anatolia, Turkey, where archae­ologists have discovered the world’s oldest mirror and wooden bowl, the first fabric and first evidence of cattle farming.

“At Çatal Hüyük and several other sites, I became a conservation trouble-shooter. The same thing happened when I worked as an archaeologist. If it was complex or ephemeral archaeology, I was often given that area of excavation or sent to talk it through with the excavating archaeologist,” says Gallagher.

“I would say it was my earth science background. I understood how stratigraphy worked and whether it was naturally or cultur­ally produced. I could detect changes in soil texture or colour and unpick a complex 3-D story, which not all archaeologists can easily do,” she says.

It was a quintessentially Kiwi approach to archaeology: in the absence of artefacts, use the surrounding geology or natural deposits.

“My interest in the natural world and its applicability came from my studies in geomor­phology and from the opportunities to work on Maori prehistory—that and a fascination with the evidence that results from mixing two cultures,” she says. “Maori have this concept of ‘mauri’, the energy, or life force, that binds all things in the physical world. As an archaeo­logical conservator, this is something I can identify with.”

As a university student, Gallagher’s initial leaning towards volcanology soon morphed into a focus on how landscapes changed over time, then how people used the natural materials they found in those landscapes. From there it was a short step to working part-time on Auckland Museum’s stone tool collections. Later, as a field archaeologist, she became aware of how sites and objects were being imperilled by pressure from developers or from limited funds for excavations.

“I could see how different burial environ­ments affected various materials and what happened if they were not treated properly after excavation. I realised that with any site there was a need to put conservation treat­ment and management plans in place at the outset.”

Gallagher travelled to England to specialise, taking in a chemistry course for conservators at University College London. She eventually found herself managing the largest commercial archaeological laboratory in Ireland.

“I love the way science meets art in archaeological conservation,” she says.

Now, back in New Zealand—“the best place to bring up kids”—with her partner, architect and former Time Team graphic designer Raysan Al-Kubaisi, she is based in Waihi Beach, where her gold-mining forebears first made a home for themselves a century ago. Gallagher has just completed a report on the site of Grand Junction Mine’s 1913 refinery building, one of only three in the country.

Mention of the mine prompts a question­ where do the limits of archaeology lie? How close to the present can it venture? Rather far, in Gallagher’s view.

“Archaeologists in New Zealand are now acknowledging that post-contact archaeology is a valid field of investigation. They are also starting to say that it comes within the scope of their jobs to go in and record buildings. That wasn’t happening when I left.”

Nevertheless, Gallagher is frustrated at the limited opportunities archaeologists have had to work on Christchurch’s heritage sites in the aftermath of the recent earthquakes.

“In Europe, archaeologists are at the forefront of decision-making about the fate of heritage buildings and how to deal with their deconstruction or demolition, if that becomes necessary. Here, often the best you can hope for is to get an architect or engineer who is sympathetic to heritage,” she says.

Gallagher also admires the British system of despatching archaeological objects to a storage facility when they come out of the ground.

“A lot of material relating to New Zealand culture is not being supported properly. It would be great to have a dedicated facility where objects and information could be depos­ited and worked on professionally.”

Archaeologists have a great responsibility to share their discoveries because archaeology reveals the building blocks of society today, she says. “Studying the past can feed information into important discussions regarding things like climate change, marine resources and landscape modification.

“I find it fascinating that you can be handed some old rusty metal, for example, x-ray it, analyse the results and extract something meaningful from it.”

Her latest subject, unearthed by archae­ologists on Auckland’s Victoria Park tunnel, is a corroded 19th-century pistol. Still loaded. Found at the bottom of a well.

“There is a possibility that it might be a murder weapon,” says Gallagher, with just a hint of Time Team-style intrigue.