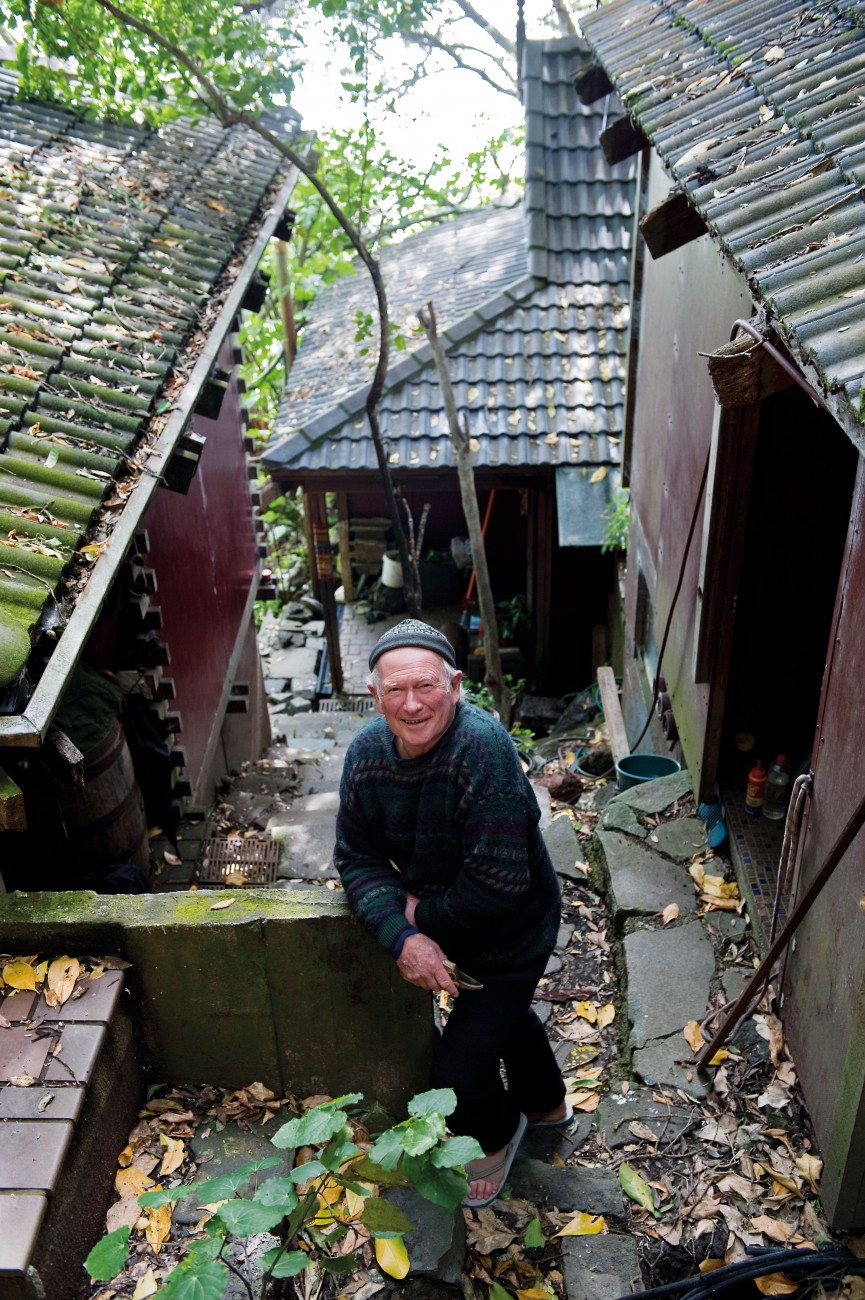 I couldn’t find Tony Watkins’ place at first. You’d think an architect’s house would draw attention to itself, advertising the fact that “Here lives a professional”. Not so with Watkins, 75, architect, lecturer, urban designer, maritime planner, writer, environ­mentalist and, until recently, “servant of Piglet the Great”, his legendary pet hog, RIP. Watkins’ house doesn’t announce itself. Built a long walk from the street, in Karaka Bay at the mouth of the Tamaki River in Auckland, it waits to be found.

I ducked under an upturned dinghy that serves as a gateway and walked up a set of rough steps—the sort that force you to look where you’re putting your feet; a celebration, you might say, of the process of stepping. A voice greeted me through trees that drenched the whole site in dappled shade, and a memorable visit began.

We started talking in the dining room­ though labels like ‘dining room’ don’t mean much in this house, where spaces evolve as needs change. Watkins calls it “a loose fit”—a key concept in the vernacular architecture he espouses.

“A vernacular house grows and adapts, constantly reflecting its culture, place and time. It is alive.”

We were sitting at tree-canopy level. Beautifully joined floor-to-ceiling window panels had been slid open to let in the fresh­ness of the spring morning, and interior and exterior seemed to merge. The house felt porous, as if in permanent conversation with air, leaves, sunlight—and birds. A blackbird hopped past my feet to take bits of apple core that had been left out for it. I wondered if it was a descendant of Mabel, a blackbird that had built its nest beside the kitchen sink, and which Watkins wrote about it in one of his columns for the Auckland Star.

The Star columns ran in the late 1970s, when Watkins was building the house, and have been republished in book form as The Human House. Part anecdote, part philos­ophy, the pieces are full of wise thoughts about building well and living well.

A house is a journey, not an arrival. A house is a relationship, not an object. A house is falling in love with life—and if it isn’t, it would be better if it had never been built. In large part, the book is an invitation for people to believe they can build their own home—as Watkins did, piece by piece as he could afford it.

“No one can live your life for you, and no one can build your house for you,” he wrote in one column. We should be a nation of owner-builders, as we once were. “How did you know where to start?” I asked, imagining the planning paralysis I would experience when confronting a project like that. “You start with the given,” he said. In his case, the beach. “What’s the first thing you need after a swim? A shower.” So he built a bathhouse. And the rest just followed.

The house is a collection of structures rather than a single building. Partly, that’s to accommodate the steepness of the site, a piece of land more suited to a luge course than a house. The various structures have paths linking them, and there is no obvious entry or exit. With this house, you are always in the midst of it, as if you were in the midst of a village, or a story.

One part nestles under the limbs of a huge pohutukawa. Watkins built on deep piles to avoid disturbing the roots. He wanted to show me the basement—to get down to where the house met the earth. We descended a tight spiral staircase of the kind that you might expect in a medieval tower, and came out into a space of a dozen or more arched grottos. They opened to each other like the cloisters in a monastery, an effect enhanced by the paint­ings, ceramics and art objects that had been placed in each one.

Watkins said that a few years back, a friend of his was terminally ill and needed a place to die. He’d been a man of the sea, and this confined space—as compact as a yacht cabin—was perfect for him. It had all he needed: a bed, a sink and a door that opened to the morning sun and the glittering dance of light on the Waitemata Harbour. Watkins invited him to cast his anchor here, and that memory still enriches this space.

The rooms of a house should be filled with personality and memory, he said. Birth, death, sickness, healing, children, old people—a truly human house welcomes all conditions and categories within its walls, and its mana grows as a result. “It takes 50 years for a house to acquire a patina of expe­rience, of being lived in,” he said.

But what if you haven’t had his good fortune, I asked. What if you’ve ended up with a box in suburbia, with all the looseness of fit of a straitjacket? What can be done? He paused for a moment, then said, “Pop open a bottle of champagne. Celebrate the house that brought you this far. Then begin to dream again. Dreams are what houses are made of. Maybe you can change the way you live in that house. Maybe you rise above the archi­tecture. Whatever you do, resist the do-over mentality. More consumption doesn’t solve anything. Don’t conform to what everybody else is doing. Be original. Be local. Take a risk.”

Living a long time with a house is like sustaining a marriage; we have to fall in love again, says Watkins. “Falling in love with a house is concerned with being, not doing. Not asking why, but asking why not. Experiencing the sheer joy of being alive in this place, which, because it exists, makes it possible to touch life.”