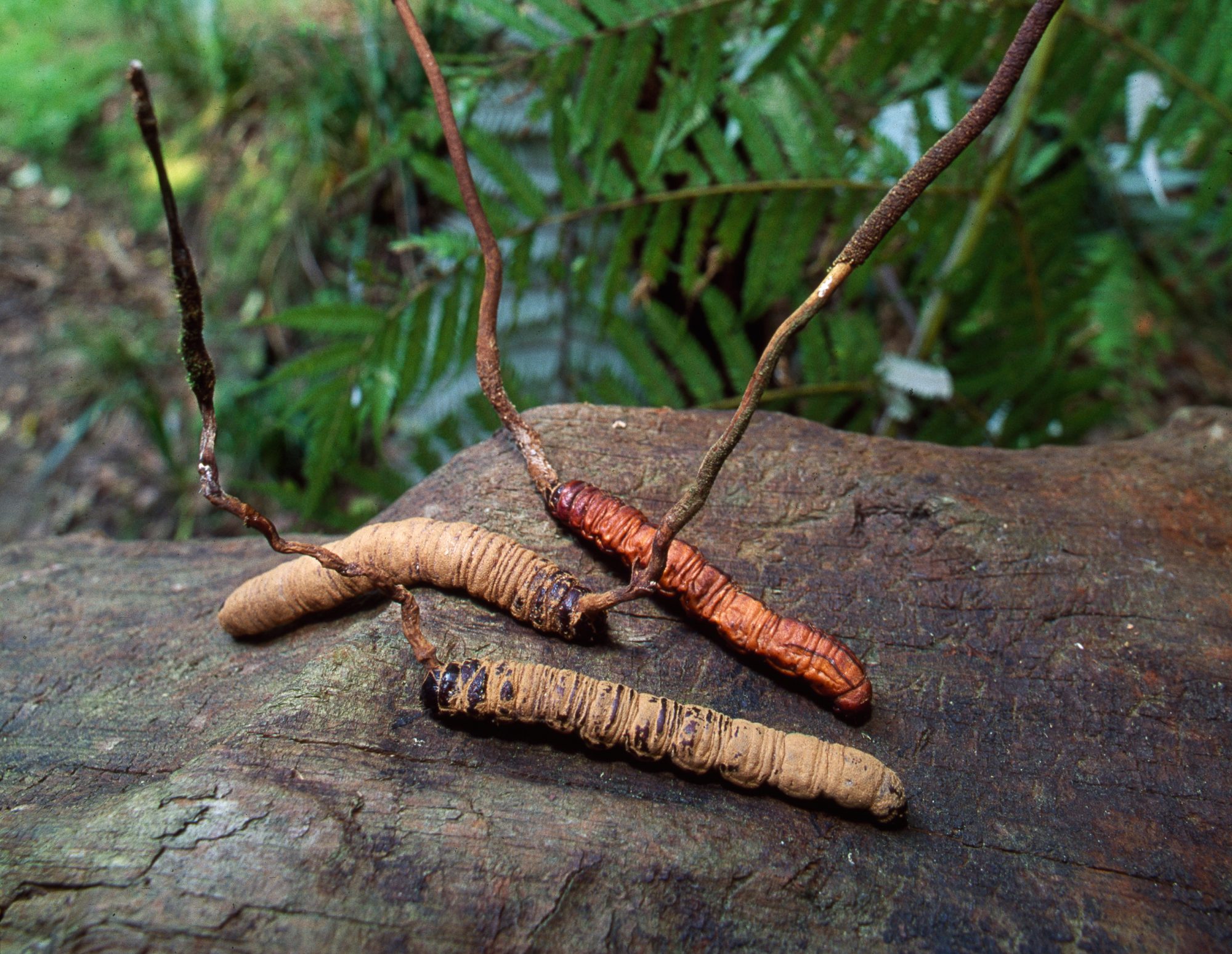 In 1763, an English scientist claimed to have discovered an insect that could turn into a plant. He called the creature the Veg­etable Fly, and wrote: “In the month of May it buries itself in the earth and begins to vegetate. By the latter end of July a tree arrives at its full growth and resembles a coral branch, and is about three inches high and bears several little pods, which, dropping off, become worms, from thence flies, like the English caterpillar.”

This description was typical of sci­ence 200 years ago—a mixture of fact and superstition. He was actually de­scribing Cordyceps, a genus of fungal parasites which attack a variety of living creatures, usually insects. There are some 200 species of Cordyceps found throughout the world, and at least a dozen of these have been recorded in New Zealand.

The most common New Zealand representative is the vegetable cater­pillar, Cordyceps robertsii, which seeks out the larvae of one of six species of moth known as forest porinas, belonging to the genera Dumbletonius and Aoraia. Other spe­cies of porina occur in grassland and alpine habitats, but only the forest species are known to be attacked by Cordyceps.

Pasture porinas, like their relatives the grass grubs, consume large quan­tities of grass, and are regarded as agricultural pests. Collectively, the porinas belong to a group of primi­tive moths known as hepialids—a group which also includes the large green ghost or puriri moth.

The caterpillars of forest porinas spend most of their daylight hours in silk-lined vertical shafts under the soil. Their main feeding activity is at night, when they emerge from their under­ground hide-outs to feed on leaf lit­ter, forest grasses and seedlings.

While browsing, the caterpillars run the risk of coming into contact with Cordyceps spores which have been dispersed in their millions over the forest floor by mature fungi. It is not known precisely how the cater­pillars become infected, but it is thought that spores may be taken in with food, or perhaps ingested through the insect’s breathing tubes or spiracles. Possibly, sprouting spore threads, or hyphae, may attach them­selves to the skin of the caterpillar and penetrate it by enzyme activity.

Once infected, the caterpillar is doomed. The hyphae spread quickly through the entire body cavity of the caterpillar, forming a tangled network of threads called a mycelium. As they grow, the hyphae secrete digestive juices which dissolve the internal organs of the host, enabling the lique­fied nutrients to be absorbed.

Eventually, the body cavity be­comes completely filled with a dense mass of white mycelium, and at this stage the whole structure is known as a sclerotium. Because the fungus remains enclosed within the skin of the host, retaining the caterpillar’s shape, it is described as a “vegetable cater­pillar,” though, strictly speaking, the term is a misnomer because fungi are not plants. (See “The Fifth Kingdom,” New Zealand Geographic, Issue 11)

Once the food source has been exhausted, Cordyceps produces a fruiting body, or stroma, in the form of a thin brownish stem which pushes up to the surface through the tube that had been excavated by the caterpillar. The stroma sometimes reaches a length of 30 to 40 centime­tres, of which perhaps 8 to 20cm will extend above the forest floor.

The top four or five centimetres is slightly club-shaped and a darker brown colour, and it forms the fruit­ing body. It is covered with many hundreds of tiny receptacles called perithecia, which open to release the spores. These spread over the surface of the forest floor ready to infect an­other luckless moth larva.

Caterpillars which manage to avoid Cordyceps spores will go on to pupate and hatch into adults—if they also succeed in avoiding the atten­tions of birds and insect parasites like the ichneumon fly.

Adult porinas are usually noctur­nal, and have a wingspan of up to 75mm, with the female usually 10 per cent larger than the male. Their wings are usually a dappled brown, but there is considerable variation, and sometimes a striking pink colour is encountered.

The adults do not have functional mouthparts, and therefore cannot feed. Consequently, they live a short life-24 to 48 hours at the most. Their single purpose is to mate and pro­duce eggs.

During the nights of summer or autumn (depending on the species), mature pupae wriggle up the shafts bored by the larval caterpillars until they reach the entrance. There, each pupa anchors itself, using circles of strong spines on its abdominal seg­ments. Inside, the adult presses against the front end of the pupa until the skin bursts open, allowing it to walk out. The emergent moth finds a stalk or fern frond from which it can hang and expand its wings, then flies away in search of a mate.

North Island forest porinas of the genus Dumbletonius mate in the for­est canopy. The female flies to the-treetops, then unfolds a balloon-shaped membrane from her abdomen, which she wafts in the wind to distribute her sex pheromones and attract males. Females of some South Island porinas (genus Aoraia) are brachypterous, which means their wings are not large enough for them to get airborne—so they mate on the ground.

Each female porina may lay more than a thousand eggs, releasing them during flight and scattering them over the forest floor. After three to five weeks these tiny, spherical eggs hatch into larvae which feed on organic matter on the surface. As they get larger they burrow into the soil, forming tunnels that may be up to 25cm deep. The fully grown larvae are grey or creamy-white, heavily built and up to 90mm long. They pupate in late spring.

Although the vegetable caterpillar is regarded with special interest be­cause of the way it takes over its host, yet retains the insect shape, the other Cordyceps species also use insects as nutrient sources. For example, Cordyceps sinclairii parasitises fully grown cicada nymphs, producing, predictably, vegetable cicadas. Un­like the caterpillars, these creations are soft and fragile, and last for only a short time. The fungus produces a number of short, stalked stromata which are covered with dense clus­ters of white powdery spores.

“Vegetable insects” are known throughout the world, and are often regarded as objects of mystery or su­perstition because of their unusual life history. For centuries, the Chi­nese have prized Cordyceps for medi­cal reasons. One species, Cordyceps sinensis is described in an ancient Chinese medical guide as “sweet and mild, keeps the lungs fit, strengthens the kidneys and builds up the mar­row, checks haemorrhage and re­duces phlegm, stops continued coughing and cures illnesses in the diaphragm.”

Another medical guide gives the  following advice: “Extract a few pieces of Cordyceps sinensis with wine. When administered, this will alleviate pain along waist and knees, and strengthen the kidneys. When cooked with old duck, it is nutritious for old people.”

Even in modern times, traditional Chinese doctors still use it both as a tonic and as a tranquillising medicine. It is used for treating debility after ill­ness, spitting of blood caused by tu­berculosis, chronic coughing and asthma caused by senility, night sweat­ing, anaemia and malignant tumours. Evidently, the lowly vegetable caterpil­lar is a formidable medical tool!

The vegetable caterpillar was well known to the pre-European Maori, but not as a medicine. It was called awheto, and in many tribes it was used as a tattooing pigment. A number of specimens would be col­lected and, after being hung up to dry, they were burnt and pulverised. The resulting black powder was then mixed with fat and water to produce a black paste.

After the tattoo pattern had been marked out, the skin was severed by hitting the back of the tattoo­ing tool. Then a second im­plement, the uhi pure, was dipped in the black paste, placed on the cut and also struck, forcing the pigment into the wound where it left a permanent mark.

Vegetable caterpillar pig­ment was used particularly by the tribes of the central and eastern North Island. Further north, where the kauri grew, it tended to be replaced by kauri gum, which was also burnt and powdered, and pro­duced a darker pigment.

It is known that early Maori ate porina caterpillars—when heated over a fire they were said to have a “pleasant nutty flavour”—but it is most un­likely that they would have bothered with the hardened, parasitised larvae.

The vegetable caterpillar evoked considerable interest among the first European arrivals to New Zealand. In fact, Cordyceps robertsii has the honour of being the first fungus recorded from these shores. It was described by the fa­mous English botanist Sir William Hooker in 1836 from a specimen brought to him by a Mr Roberts—which no doubt explains its specific name.

The bizarre sight of what looks like a plant emanating from an ap­parently intact caterpillar has led to confusion and fanciful explanations through the years. In the 1940s a letter to a local newspaper from “Old-timer” of Hastings, asked:

“Can the vegetable caterpillar still be found? Years ago, when living in the pumice country on the Taupo Line, Maoris at different times gave me dead specimens. I have never been certain if the caterpillars were real. The story was that this grub swallowed a fern seed and before he could digest it, it grew out of his mouth and killed him.”

Written evidence suggests that in the early days of European settle­ment the vegetable caterpillar was not uncommon, especially in the Rotorua region. There are records of specimens being obtained from Waipu forest in the north, to Southland and the Haast in the south, and from Waikaremoana to Egmont.

The caterpillar seems to have a similar distribution today. Curiously, no specimens have been found in Otago, although this region has an otherwise high diversity of moths.

Finding vegetable caterpillars is not easy—until you know where to look. Bear in mind that you are trying to locate a thin brown stick, some­thing like a Sparkler, poking a few centimetres above a forest floor that is in all probability littered with thin brown sticks.

Never having been expert at locat­ing needles in haystacks, I did not hold out great hopes of finding the elusive creatures unaided, so I con­tacted Chris Ecroyd, a botanist at the Forest Research Institute in Rotorua and an expert on the flora of Pureora Forest.

Following his directions, I found myself a hundred metres up a well-used hiker’s track near Mt Pureora. I took a few steps off the track, squatted down and immedi­ately noticed a thin twig pro­truding from the leaf litter. Its dark brown velvety covering of spore-bearing receptacles revealed it unmistakably as the vegetable caterpillar. Within five minutes I had found six more, all within a radius of five metres. So much for the needle in a haystack !

In spite of this find, I sus­pect that Cordyceps may be becoming increasingly con­fined to remote stands of rela­tively old and undisturbed forest. Such habitats provide food for the host moths and a forest floor that is relatively stable for long periods of time.

Providing that protection is given to these remaining patches of forest, the survival of this curious and elusive fungus should be assured.

Decline of a killer