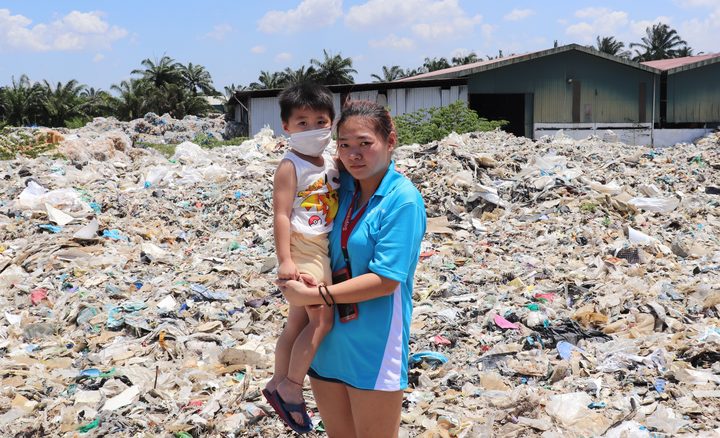 Thousands of tonnes of plastic that New Zealand used to send to China for recycling is now going to Malaysia, where illegal factories are burning and dumping the waste they can’t process. Nita Blake-Persen travelled to Malaysia for Insight to investigate how the lives of local people and the environment are being affected.

As night falls in Malaysia, plumes of toxic smoke begin to waft across the across the town of Jenjarom.

Nearby residents wake to the smell of burning plastic that seeps into their homes – closing the doors and windows doesn’t help.

The smell, and the accompanying headaches and coughing, have become familiar for them in recent months, as more and more illegal plastic recycling factories have popped up in the area.

About an hour’s drive from the capital Kuala Lumpur, the town has been traditionally focused on agriculture, with palm oil plantations lining most roads.

But these days the factories, which recycle thousands of tonnes of waste from countries all around the world, are doing a roaring trade.

Drone footage in this video supplied by local campaigners

They have been multiplying at an alarming rate since China banned plastic imports at the start of the year.

Having previously taken around 50 percent of the world’s waste, the ban has meant many countries have scrambled to find a new market to export their unwanted plastics to.

Malaysia has become a popular alternative for the UK, Australia and New Zealand – New Zealand’s exports there tripled in the first six months of this year.

Nearly 40 factories are now operating in the district of Kuala Langat, where Jenjarom is located.

Most are hidden in the Palm Oil plantations, which the factory owners rent because they are cheap and accessible to waterways.

That way they can easily dump the contaminated water they use to clean the filthy plastics before they process them.

In the past two months, several fish and prawn ponds operating nearby have lost all of their stock, and the owners suspect they were poisoned by the toxic wastewater coming from the factories.

The plastic that can’t be recycled – either because it’s too contaminated or it’s just not economical to do so – is either dumped, or burned.

That’s having a devastating effect on the environment, and the health of those living nearby.

‘An unbearable smell in the air’

Lay Peng Pua, a chemist, has lived in the area most of her life. She says the factories have been a disaster for Jenjarom.

“Since February of this year we felt very bad and [there’s been] an unbearable smell in the air, especially at night and in the morning.

“But we didn’t realise… the source until we gradually found there were more and more recycling factories around us, but due to their high fencing design we couldn’t see anything.”

In July, local authorities visited 38 factories in the Kuala Langat area but found only three had recycling permits.

Fourteen have been shut down but since then, Ms Pua says four have started operating again – one just hours after it was closed.

She says most of the factories are Chinese owned and operated, with many simply moving their business to Malaysia when the ban came into effect.

Once they salvage what they can for recycling, they ship the plastic pellets they produce back to China to be made into new products.

Ms Pua says many local authorities are paid off by the factory owners to ignore their illegal activities, with enforcement virtually non-existent.

She is hopeful a recent change in government will mean more protections for the environment – and a possible ban on plastic imports.

Maria Chin Abdullah was elected as the MP for Petaling Jaya, a large city that runs into Kuala Lumpur, in May’s general election.

The election brought in the first change in government in the country’s 60-year history, and many MPs and senior staffers are still settling in.

“We may have changed our government but we are working within an old system. And these civil servants are from the past government and they follow the kind of attitude that is left behind.

“I’m not surprised there may be allegations of corruption, and it is still continuing. It’s just that we have to set-up the policy and then take action on that.”

Insight is on Apple Podcasts: subscribe and give us a review – Or head to Spotify or wherever you get your podcasts

In July, the government suspended the importing licenses of 114 factories as it tried to verify which businesses were operating properly.

But the suspension is reported to have lapsed less than a month later.

She says Malaysia – which has been named the eighth worst country in the world for plastic pollution – is not even able to cope with its own waste.

But she notes that the responsibility does not just fall on Malaysia – and that while New Zealand exporters are willing to sell their plastic overseas, there will always be buyers wanting it – no matter the impact on people’s health or the environment.

Nearly 6000 tonnes have already been exported there so far this year.

New Zealand recyclers who have plastic piles mounting in their yards say they have no choice but to ship it elsewhere.

Flies are buzzing around bales of waste at the Smart Environmental processing plant in Thames, where waste from 16 councils is waiting to be shipped overseas.

The plant’s manager, Layne Sefton, says since China’s ban took effect, the price that they can sell their plastic for has plummeted, and they are losing money exporting it – but they have no choice.

Desperate to recoup costs from collecting and sorting the plastic, Mr Sefton says they will sell it to whoever they can – and if they are approached by an overseas buyer they do not ask many questions about where it is going.

Where does it go?

Tracing exactly where New Zealand’s plastic goes when it leaves our ports is incredibly difficult.

Recyclers and councils here typically sell the plastics to a broker, who then sells it to factories across Asia for processing.

Waste Management Ltd, one of the largest recyclers in the country, confirmed they sold plastic to Malaysia but did not have details of where it ended up.

Envirowaste, the other major New Zealand recycler, would not tell Insight anything about their exports.

Wellington City Council, which exports just several hundred tonnes of plastic to Malaysia each year for processing, recently travelled there to ensure it was being properly processed. But they appear to be the only council which has done so.

The government appears to have little information about what is going on with plastic waste being sent overseas. The Ministry for the Environment is studying what result China’s change in policy has had on the recycling industry, including what is going on with recycling exports. Both local authorities and industry members are involved.