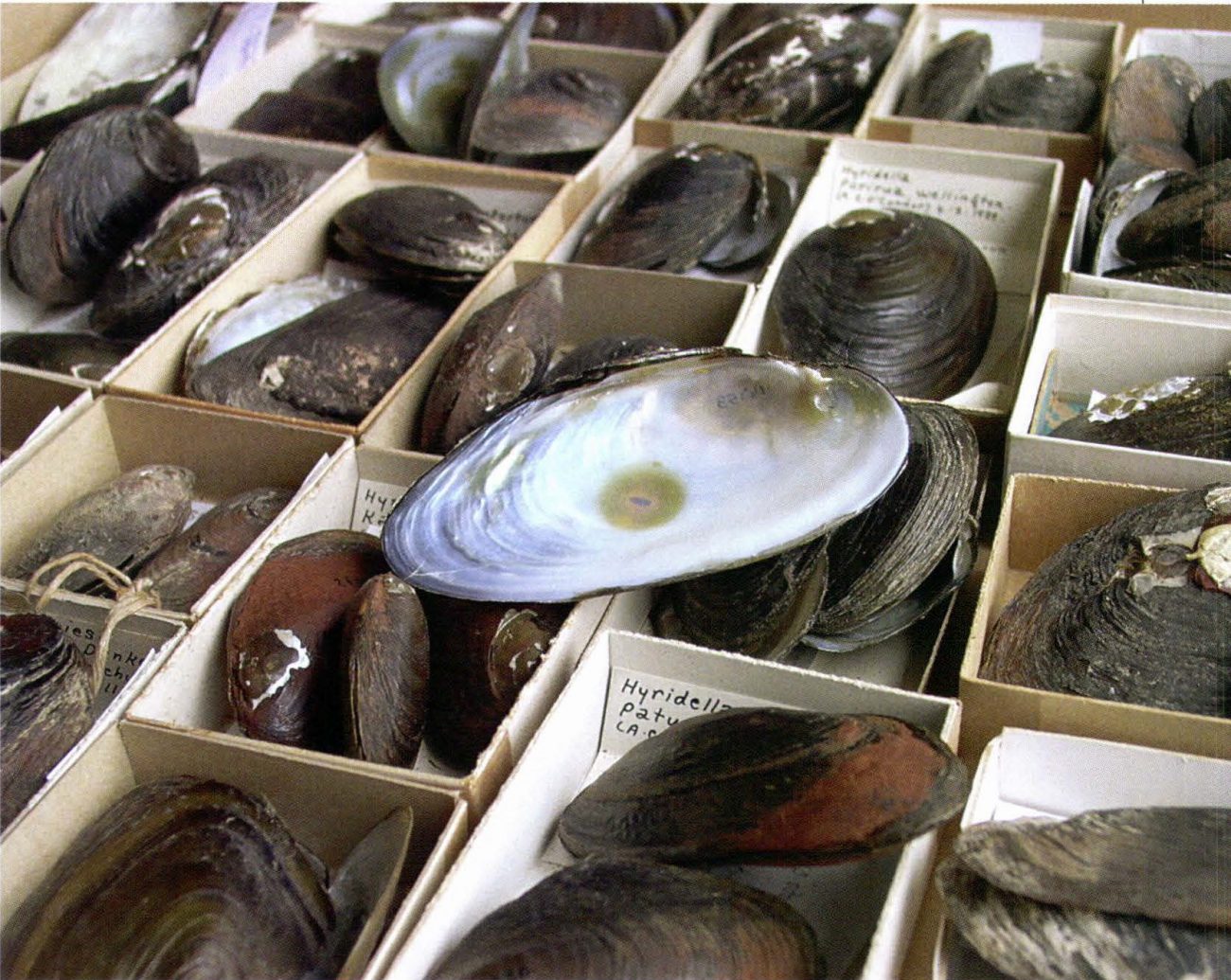 Kakahi once formed extensive beds in New Zealand lakes and rivers, living shallowly buried in sand or mud, like pipi, rather than attached to rocks in the manner of most marine mussels. They were valued by Maori as food, especially around inland lakes. A decline in their numbers in recent decades has prompted speculation about the cause and how it can be mitigated.

Some years ago, National Institute of Water and Atmospheric Research scientist Mark James suggested that a lack of juveniles in mussel populations in Lake Taupo indicated that the population was not maintaining itself. Possible factors in the population decline, he suggested, included sediment type, food supply, water quality, water velocity, bed slope and the absence of sufficient numbers of fish hosts for the mussel’s parasitic larva.

A decline in the numbers of a freshwater organism is often blamed on deterioration in water quality—partly because this is easy to see. Phytoplankton blooms caused by high nutrient levels create “green water,” which is harmful to many aquatic species. But this may be too simplistic a line of reasoning. It is even possible that phytoplankton blooms are a symptom of kakahi decline, not a cause.

How can the relationship between cause and effect be turned on its head like this? Consider a North American example. In recent decades, a small exotic shellfish, the zebra mussel, has invaded lakes in North America, becoming a serious pest. However, the proliferation of the mussel is not entirely bad news: people can now see the bottoms of lakes hitherto obscured by water turbidity, the improvement in water clarity resulting from millions of zebra mussels filtering out phytoplankton.

Could a reverse phenomenon be occurring in some of New Zealand’s lakes? Has the decline in kakahi resulted in less water being “bio-filtered,” leading to an increase in phytoplankton and thus a deterioration in water quality?

The absence of historical data on the abundance of kakahi makes this hypothesis hard to test; in any case, a decline in mussel numbers is unlikely to affect water quality in a lake the depth of Taupo. Besides, the question remains: if loss of kakahi means more phytoplankton, what is causing the decline of kakahi in the first place?

Like all molluscs, kakahi have a larval stage. The kakahi larva, called a glochidium, is parasitic, and attaches itself to a fish before subsequently settling in sandy sediments on a lake-or riverbed. In this aspect of its life cycle, kakahi differ from marine mussels—but it is for a common-sense reason. Marine bivalves produce eggs that hatch into tiny, free-swimming larvae. These spend a period being dispersed around the coast in the plankton before settling down to a less mobile adulthood.

In a river, however, free-swimming larvae would inevitably be flushed out to sea. The kakahi glochidium gets around this problem by sitting on the bottom and attaching itself to a small fish nosing among the detritus for food. Attachment can be to the gills, fins, snout, roof of the mouth or lips. While it is attached, the glochidium probably draws nutrients from the fish, but being only 0.3 mm long it is unlikely to cause its host much harm.

During the few summer weeks it remains attached, the glochidium has a fair chance of being carried upstream by the fish. Indeed, fish transport is the only hope freshwater mussels have of establishing an existence upstream of their parents. It is therefore possible that a reduction in the number of fish has caused the decline in kakahi.

As with kakahi, so with New Zealand lake fish: little quantitative information on their historical abundance is available. However, the history of trout introductions into the country’s lakes is well recorded, and may be pertinent.

Before European settlement, Maori netted koaro whitebait—Galaxias brevipinnis—by the hundredweight in Lake Taupo. Early European explorers were offered whitebait as food in Maori villages around the lake. Whitebait were also abundant in the Rotorua lakes, and were an important food for tribes in that area. Yet today it is hard to find a single shoal of koaro in Lake Taupo. What has happened?

In a word: trout. The introduction of brown and rainbow trout in the late 1800s caused a massive decline in koaro numbers. The voracious trout thrived, generating superb fisheries, though by the early 1900s their condition had deteriorated in parallel with their increasing abundance. Tonnes of trout were netted and removed from Lake Taupo to reduce numbers and enable those left to regain condition. Rotorua Maori opposed the introduction of trout into their lakes, fearing the impact on traditional food supplies.

The trout food that was so reduced in Lake Taupo, and about which Rotorua Maori were concerned, was primarily koaro. Eventually, common smelt—Retropinna retropinna—were introduced as a substitute. These flourished—for some reason they are able to endure prolonged trout predation—and are now the primary food source of Taupo trout.

What has all this to do with kakahi? In Lake Taupo and the Rotorua lakes, the host of the mussel’s parasitic larva was originally the koaro, and perhaps also the common bully‑Gobiomorphus cotidianus. Koaro swam near the lake bed, and were thus accessible to mussel larvae when they were liberated at breeding time.

Now that koaro have been largely replaced by smelt in Lake Taupo, the mussel population has suffered. How so? Why don’t kakahi larvae attach themselves to other fish now common in their waters, such as smelt, common bullies or trout—or even the brown bullhead catfish, now common on sandy substrates in Lake Taupo?

There is no single answer to this question, but some observations can be made. First, “replacement” fish species in Lake Taupo may be less accessible to kakahi glochidia than koaro were. Smelt and trout are mid-and surface-water fish, while bullies seem most common in rocky shallows, where there are few kakahi. It would be interesting to see if catfish make a suitable host, but no research on this possibility has been conducted.

It may be, of course, that the host–parasite relationship between kakahi and native fish is not transferable to introduced species. Hosts and their parasites often co-evolve, so that only traditional host species are acceptable to parasites, and this may be the case with kakahi—another question for research.

If this line of thinking is correct, the decline of kakahi in Lake Taupo may indeed be the result of the reduction in koaro. Similar changes may have occurred in other lakes. If so, and if kakahi play a role in filtering phytoplankton from the water as zebra mussels do, deterioration in water quality may, at least in part, be a symptom of loss of kakahi rather than a cause.

Taking this hypothesis further, if kakahi decline is not caused by deterioration in water quality, efforts to “clean up” lakes to facilitate recovery of kakahi populations may well fail. It would, of course, be nice to have cleaner lakes, but the expectation that kakahi populations would then recover may not be fulfilled. Sadly, I doubt that kakahi will ever be abundant again unless their larvae find a new fish host.