New Zealand Geographic started life in the ruins of the ’87 stockmarket crash. John Woods and Kennedy Warne, washed up after the collapse of their advertising agency, stumbled on a copy of Australian Geographic, and decided New Zealand needed a voice for our natural world too.

“The tie came off, the NBR subscription lapsed, and by year’s end we had the first issue out, in time for Christmas,” remembers Warne. 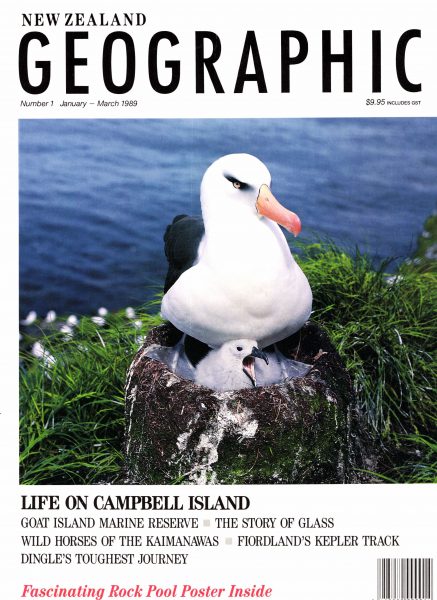 They described the magazine as “the journal of New Zealand”. It featured first-rate photojournalism, and adopted a creative, reflective tone in the writing that tackled the wider considerations of life in New Zealand, beyond the bald facts of the daily news beat.

“We wanted the magazine to be a publication of record,” says Warne, “a durable, collectable source of information about all things Kiwi. But we also wanted to drill deep into the strata of New Zealand history and memory and speak about who we are as inhabitants of this island ark.”

From its first issue, New Zealand Geographic had an emphasis on science as the arbiter of reason and direction in exploring and understanding our world, a reputation it holds to this day.

But it wasn’t an easy ride. There were there two receiverships within two years, and a decade later a liquidation from which the magazine was lucky to emerge. There have been many changes in the media landscape in the past 30 years, but New Zealand Geographic’s focus on high-quality production and a support from readers through subscriptions has pulled the title through.

For the past decade New Zealand Geographic has been owned by Kōwhai Media Ltd, an independent, family media business that is in it for the long haul. We have three employees, a shared office space, no debt, and a tonne of ideas. The owner is also the publisher, and was formerly the editor, so the emphasis on high production values remains at the core of the magazine.

We’re proud of what we make, we’re investing in it rather than wringing revenue out of it, and want to maintain and grow its voice and influence in the public conversation.

It’s not so much our scope that sets us apart as the magazine’s treatment of stories—still the lavish photography and writing that reflects on our values as a society and and the structure and function of the natural world around us. The coverage is wide, from dog shows to base-jumping, methamphetamine to marlin. 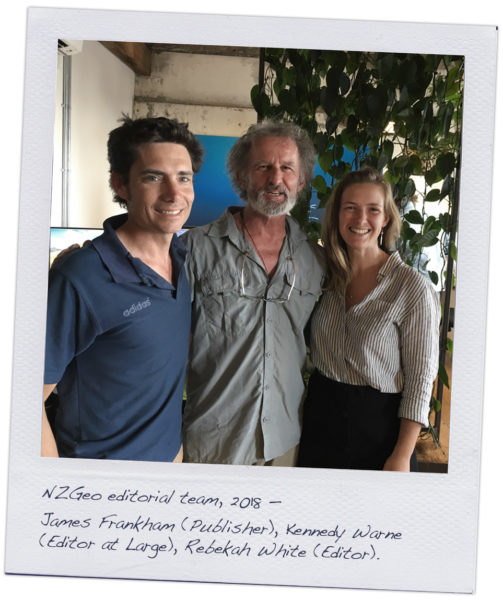 New Zealand Geographic has won Magazine of the Year for the past three years running, and NZGeo.com is the most popular local electronic resource in New Zealand schools. We have large audiences online and on social channels—particularly Facebook and Instagram—and we’re innovating, with established enterprises in virtual reality, augmented reality, orthomosaic modelling and an on-demand television service in collaboration with Natural History New Zealand (NHNZ).

Our writers and photographers are paid well, and importantly, they also retain copyright on their work—a commercial principle born in the first days of the magazine that still sets it apart in the industry.

New Zealand Geographic is supported by advertising, but most of our income comes from readers like you, as newsstand sales and subscriptions—both print and digital—that keep the lights on in the editorial office.

We exist to serve our readers (336,000 of them at last count) who desire nothing more than that we reflect back an honest and unflinching vision of our environment and society.