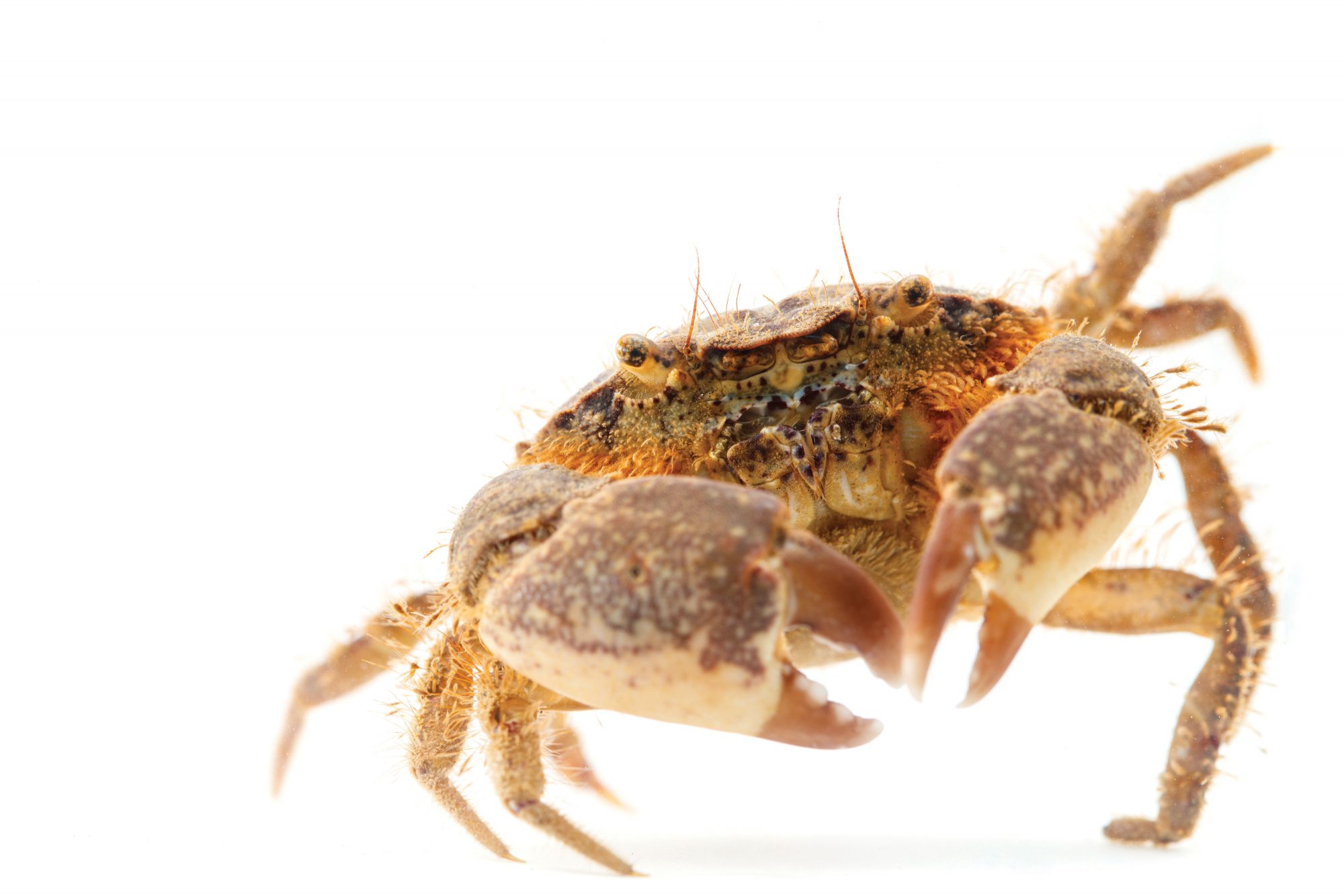 In August, the Delta variant of COVID-19 began to spread in New Zealand, and the entire country returned to the strictest form of lockdown. All at once, everyone’s world got a whole lot smaller. For Richard Robinson, the change couldn’t have been more pronounced. Now, instead of heading to the subantarctic islands to photograph whales underwater or hitching rides with commercial tuna-fishing operations off the coast of Australia, Robinson—along with his wife and three young children—found himself confined to the neighbourhood.

So he set himself a new assignment: to record the tiny inhabitants of the tide pools on the flats of Snells Beach, just 400 metres from his home. As a child, Robinson collected buckets full of specimens alongside his grandfather for the tidal tank at Napier’s National Aquarium of New Zealand. Now, as Auckland’s lockdown ticked over six weeks, then seven, he shared the same pastime with his own kids. Robinson and seven-year-old Eva made a habit of walking out onto the sand at low tide to see what they could find. Armed with buckets and nets, they lifted up rocks and peered into pools. Occasionally, five-year-old Nina joined in. 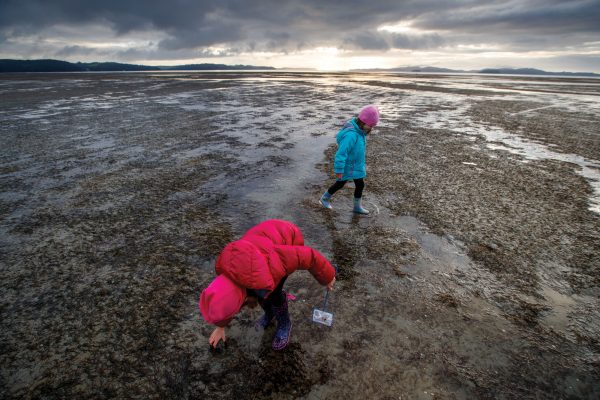 The best time to sneak up on sea creatures is usually after dark, using a red-light torch, the colour first lost underwater. But Robinson didn’t want to worry his neighbours by flashing a light around on the beach at night. And anyway, collecting by day turned out to have an unexpected perk: Eva’s keen eye. On her first day, she found a translucent little greeny-gold creature with one oversized claw—a snapping shrimp. She nicknamed it Stripy, for the bands on its tail, and over the following days, it became her favourite species to spot. “I just like the big claw, and they’re so cute.”

When another Stripy was left too long in a bucket with a hungry eleven-armed starfish, tragedy ensued. “I cried,” says Eva.

Each day, father and daughter collected a couple of creatures, brought them home to a makeshift garage studio and kept them in aerated jars. Meanwhile, Robinson set about purifying the seawater scooped up from Snells Beach—though the water looked clear to the naked eye, under the studio lights tiny suspended particles got in the way. He ran each water sample through his kitchen purifying jug over and over until it was clean.

Then, he tipped each critter into a glass cube about 10 centimetres long on each side. Against one side he placed a backdrop: a white page torn from his dive notepad. Two or three strobe lights illuminated the scene for a fraction of a second, brightly enough that he could shoot at a narrow aperture and keep the entire animal in focus.

“Some of these things are moving really fast,” he says. “The mantis shrimp are not sitting still in there. The fish are shooting around at top speed. They’re all flying around, and you have to try to focus on them and snap them.”

Each close-up reveals the vivid colours, delicate symmetry and intricate patterns of these tiny animals—and even the suggestion of personalities. “When you shoot them eye to eye, the hairy crabs are just such characters,” says Robinson.

He photographed the olive rockfish, one of the most common fishes found on New Zealand’s rocky shores, and the transparent rosy-pink glass shrimp. There were estuarine gobies, the little fishes that scatter in the sand pools on any beach in northern New Zealand. “They look like nothing when you see them,” Robinson says, “but up close their patterns are just amazing.”

There were triplefins, a species with such an accurate sense of place that if you move one 700 metres from its home, it will find its way back again. And there were tiny flounders, barely three centimetres long, which had only just morphed into their bizarre, asymmetric shape. “When they’re fry, they’re like a normal little fish with eyes on both sides,” Robinson says, “but then as they grow, one of the eyes migrates through to the other side.”

Eva collected a tiny, unassuming isopod less than a centimetre long, and insisted on bringing it home. To her dad’s surprise, it was spectacular under the studio lights—a sweet little crustacean in orange and cobalt, lime green and pink. Its portrait is now one of Robinson’s favourite photographs of the whole collection.

While fish, starfish and crabs could be easily caught with a net or bare hands, collecting the vicious mantis shrimp required a special tool to suck them from their holes in the sand. On a previous assignment, Robinson had looked in vain for mantis shrimp at Snells Beach, but with Eva he found them on the first go. “It was a mantis shrimp party out there,” he says.

When the animals’ moments in the spotlight were over, the Robinsons returned them to the tidal area where they’d been found. “Occasionally with a few tears from Eva,” says Robinson, “when she became quite attached.”

The project—which Robinson describes as “a sort of unscientific photographic reference of some of the subtidal species that we have just literally on my back doorstep”—gave meaning and focus to the family’s time in lockdown. It also allowed Robinson, whose specialty is underwater photography, to share his love of the art form and the sea with his family. 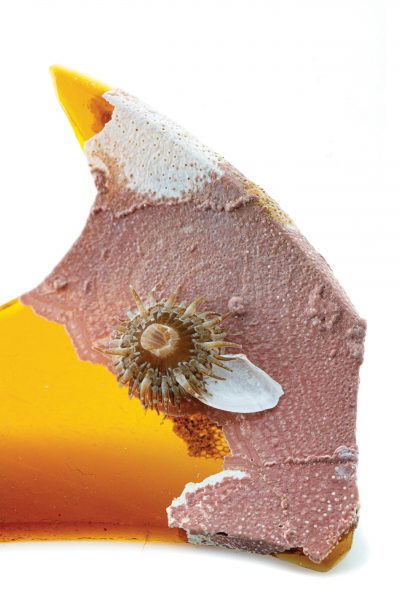 And, unlike Robinson’s recent assignments for New Zealand Geographic, this one didn’t require weeks of travel, multiple dives or the invention of new photography gear. Instead, it served as a reminder that nature isn’t “out there”: wildlife lives alongside us, in our neighbourhoods, around the corner, and there in the sand between our toes.

“I usually find that, to do remarkable stories, I’m going further and deeper and way out of my comfort zone,” says Robinson. “And yet at the end of my street I found something beautiful.”