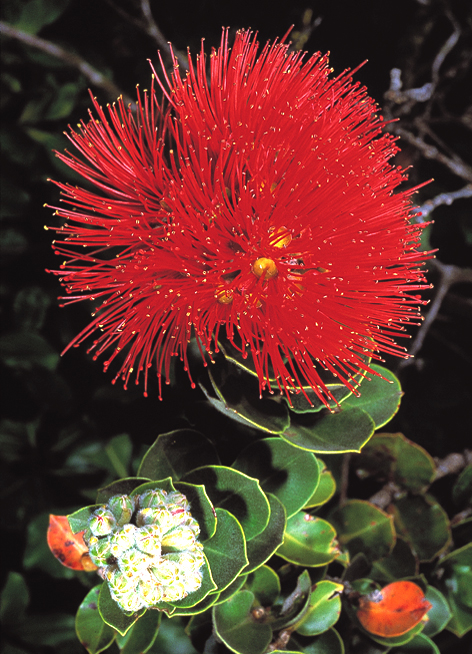 One of New Zealand’s signature trees—the southern rata, Metrosideros umbellata—has recently been identified as the closest living relative of the ancestor of all Metrosideros species throughout the Pacific.

On current understanding, the genus Metrosideros contains some 50 species of trees and woody shrubs distributed from New Zealand’s subantarctic islands to almost as far north as Japan and east to Hawaii and Pitcairn Island. It is absent from Australia, Indonesia and Micronesia, but has a major diversity centre in New Caledonia (16 species) as well as in New Zealand, where it is represented by 12 species, from the ubiquitous Christmas- flowering pohutukawa to the extremely rare Bartlett’s rata (see sidebar).

A group of researchers from the School of Biological Sciences at Auckland University (Shane Wright, Catherine Yong, David Whittaker and Richard Gardner) compared DNA from 36 species and subspecies of one group of Metrosideros to clarify relationships within the group and indicate when they might have become dispersed around the Pacific. The results placed the species into three groups, with our southern rata proving to be the nearest thing to an ancestral species.

It appears that there have been at least three migrations of Metrosideros across the Pacific. Perhaps the very first dispersal was of some ancestor resembling M. umbellata from New Zealand to New Caledonia in the later Tertiary period, more than 10 million years ago. The amount of change in the DNA of the various species suggests that around eight million years ago there was a dispersal from New Zealand towards Melanesia and Samoa, and a second from New Caledonia towards Fiji and up towards Japan, each dispersal yielding a group of related species.

The DNA of the third group of species has diverged very little from the DNA of New Zealand’s pohutukawa, indicating that pohutukawa has spread very recently (in the past million years) from New Zealand. What is surprising is how widely this group has dispersed, for its representatives are found as far away as Tahiti and Hawaii. Since New Zealand has harboured Metrosideros for many millions of years, why did this dispersal not occur much earlier?

The researchers think think climate change may provide an explanation. During the Tertiary, the climate was warm and the main winds are thought to have blown from the South-east and not been particularly strong. During the Pleistocene, which commenced two million years ago, ice ages prevailed, and with them came strong westerly winds. Metrosideros seeds are very small and light and can be lofted to high altitudes by the wind. The seeds can also survive a month’s immersion in seawater. They are thus equipped for long-distance dispersal on winds blowing in a favourable direction.

The ice ages are generally thought of as a time of contracting ranges for plants and animals, but this work suggests that Metrosideros bucked that trend, travelling abroad while other organisms stayed home.

The rarest Metrosideros of all

The rarest of New Zealand’s 12 species of Metrosideros was discovered less than 20 years ago by Papakura teacher and botanist the late John Bartlett. Until then, the forest rata, which grows to a height of 30 m, had remained undetected by the nation’s tree specialists.

Bartlett had been searching for liverworts in the Far North when he came upon an interesting specimen growing at the base of a large tree. Looking up, he realised he was gazing at a new species of rata, but was unable to reach any branches. He took bark fragments to Victoria University botanist John Dawson, who dismissed the find as merely northern rata. Bartlett stuck to his guns and returned to the area with a rifle, with which he was able to shoot off a branch. Dawson was persuaded, and the branch even took root in Wellington!

The only area where M. bartlettii has so far been found is in forest remnants behind Spirits Bay. Careful searching, most recently by a botany masters student from Auckland University, Revel Drummond, has revealed a mere 31 trees in the wild, occurring in three clusters. Like the northern rata, M. robusta, Bartlett’s rata usually starts life as an epiphyte perched in the branches of another tree or ponga. Trees do not flower every year, and their flowers are smaller than those of any other local tree rata or pohutukawa. Unlike other members of the genus, M. bartlettii has soft, spongy bark which peels readily from the trunk.

Although some of New Zealand’s shrub rata have white flowers, this species is the only tree to have them. Seed viability is very low-two per cent, compared with 10 per cent for pohutukawa. Fortunately the plant can be propagated from cuttings, and it is now available from specialist native plant nurseries.