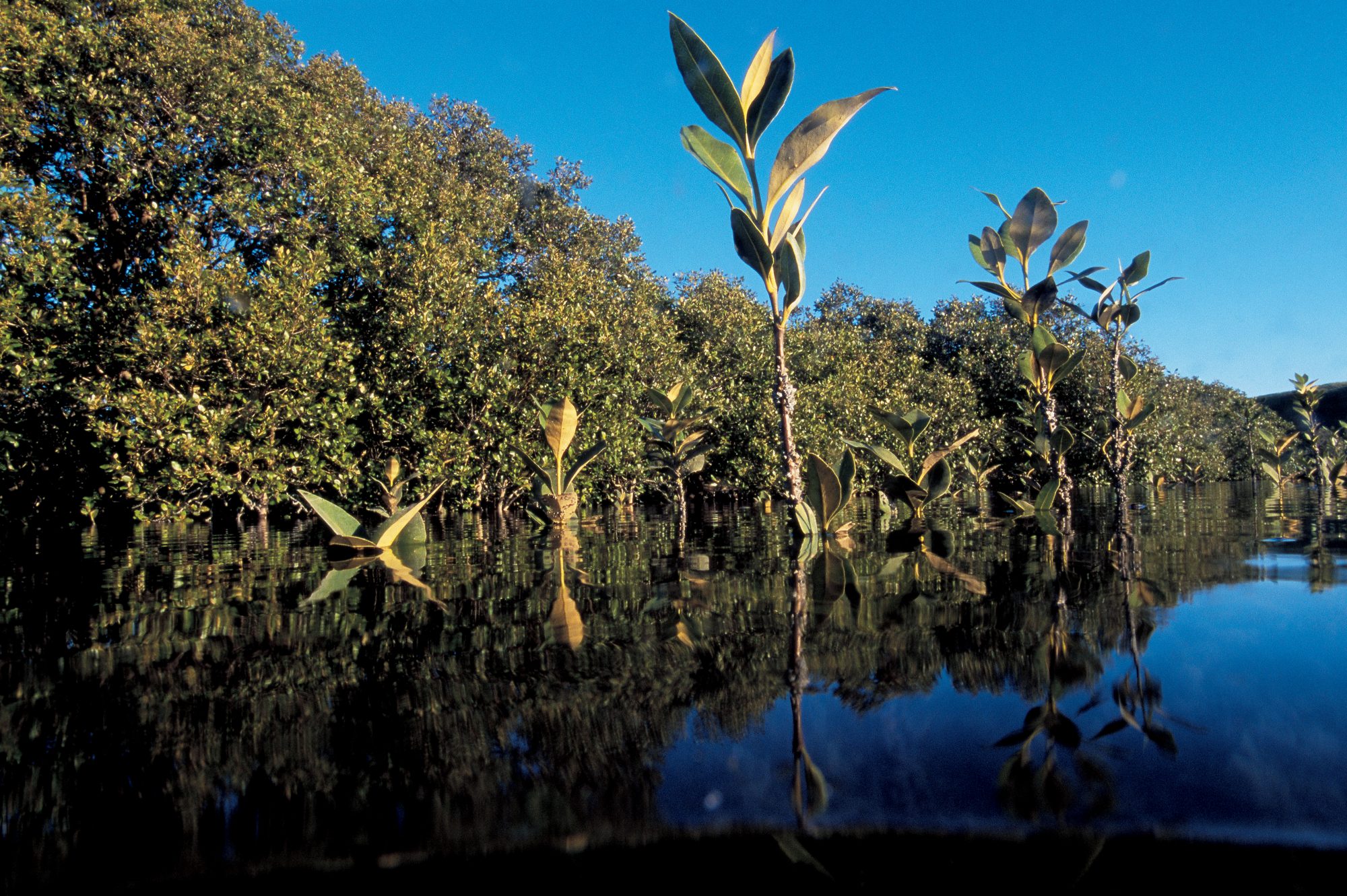 Located 35 km north-east of Whangarei, the settlement of Matapouri boasts a picture-postcard sandy beach set in an inviting rocky coastline. Offshore, the Poor Knights Islands offer some of the best snorkelling and diving in New Zealand. With such a wealth of marine treasures to explore, it is easy to ignore the small estuary that feeds into the southern end of the bay.

But appearances can be deceptive. The estuary of the Matapouri River is rich in marine life, much of it not seen elsewhere in the bay. Many of the organisms are residents while others are regular visitors that come to feed on the incoming tide. There is plenty for a careful observer armed with mask and snorkel to discover. Two factors combine to make water clarity much better in this estuary than in most. Because the estuary is small, it disgorges little sediment, hence the coastal water with which the tide fills it is clear and the bottom is more sand than mud, so there are fewer fine particles to cloud the water.

An hour each side of high tide is the best time for exploring the Matapouri estuary. At low tide the flow is reduced to a trickle down the main channel and most of the resident animals take shelter until the tide returns. When the tide is in full flood or ebb, the water movement is too strong for photography and observation to be practical. Set off an hour before high tide from near the mouth of the estuary and the current will carry you gently upriver; then, after the tide has turned, it will waft you effortlessly back to your starting point.

Mangrove trees are the most prominent feature of the estuary, lining the banks on either side. As you venture upriver they soon become dense, fully enclosing the numerous side channels and tributaries that feed into the main channel and extending inland to the limit of high tide. New Zealand has just a single species of mangrove, Avicennia marina var. australasica, and although it occurs as far south as Bay of Plenty, it grows much larger in the north. From the perspective of a terrestrial tree, an intertidal flat is an inhospitable environment, yet if a plant can deal with the salt and lack of oxygen in the substrate, there are some benefits. Estuaries are often sheltered, nutrients will be regularly replenished, there are few competing plant species, and frosts, fires and droughts are unlikely! Mangroves are well adapted to the rigours of submergence twice a day in salt water. Their leaves and shoots have a thick shiny cuticle that is impervious to seawater. Since the alluvium in which they grow is airless, they have evolved specialised breathing roots (pneumatophores) that poke up out of the muddy bottom like stakes. During low tide these roots are exposed to the air, enabling the plants to get oxygen to their lower regions. Pneumatophores and the accompanying buried roots often extend around plants for several times the diameter of the mangrove’s canopy, interlocking with roots from surrounding mangroves to form a very stable structure.

Mangroves provide ideal attachment surfaces for filter-feeders, and their trunks, branches and even leaves are frequently encrusted with oysters, mussels and barnacles. While oysters and mussels are molluscs, barnacles are specialised crustaceans that begin life as larvae dispersed among the plankton, but settle once they contact a suitable substratum. They attach themselves by the head and grow a shell for protection. When the tide is high enough to cover its shell, a barnacle opens and its legs form a netlike structure that busily combs the passing water for food.

A couple of hundred metres upriver from the bridge that carries the coastal road through Matapouri, the estuary takes a bend to the left and forms a comparatively deep pool that has become one of our favourite places for taking photographs. The bend is marked by several large mangroves and the shelter these provide attracts a group of large parore. The scene beneath the surface—illuminated to best effect when late-afternoon sun rays dance through the submerged branches—is somewhat surreal, with fish, shrimps and molluscs taking the place of birds.

Stretching down into the deepest part of the pool is the trunk of an old mangrove tree, toppled long ago when the ground beneath it was washed away. This log has become home to a multitude of animals, including estuarine triplefins (Grahamina sp., formerly Tripterigion nigripenne). Commonly known as cockabullies, triplefins take their name from the three dorsal fins that run down their backs. New Zealand waters are home to one third of all triplefin species. Inquisitive and gregarious, these fish are the clowns of the Matapouri estuary.

Estuarine triplefins tend to congregate around submerged structures such as rocky outcrops, sunken logs and bridge piles. Initially wary, they will retreat to the security of any available nook or cranny; however, curiosity soon wins out, causing them to re-emerge. So close do they then approach that we are forced to back away to keep them within the close focal limits of our cameras. If only all marine life was so cooperative.

The bottom of the pool is littered with empty cockle shells deposited by the tide. Curled up like a cat in a basket, a clingfish has settled in one. Clingfish possess modified ventral fins under the body that form a sucking disc used to adhere to a substrate. Although several species are common in the estuary, their small size, cryptic colouring and motionless habit make them difficult to spot.

A couple of years ago, local diver Jan Doak found a beautiful new anemone attached to the upturned base of the old mangrove log. Recently, this was identified as Haliplanella lineata, an overseas species that has become established in New Zealand waters, probably having hitched a ride in the ballast water of a container ship.

This is not the only overseas visitor to be found in the Matapouri estuary. Two species of goby—the small exquisite goby (Favonigobius exquisitus) and the larger bridled goby (Acentrogobius bifrenatus)—have also become established there. While the bridled goby has only been seen on a few occasions, the exquisite goby is now very common. It is smaller than the estuarine triplefin and its colouring blends perfectly with the sandy bottom. How did such a plain-looking fish earn the epithet “exquisite”? A flick of its dorsal fins emits a flash of colour similar, in miniature, to the display of the magnificent sailfish.

The sandy channels of the estuary provide access not only for larger fish such as yellow-eyed mullet and parore, but also for sand-dwellers such as flounder and star­gazers. Flounder are relatively easy to spot, either at rest on the bottom or skimming over the surface when disturbed or feeding. Star-gazers are much harder to find, owing to their habit of burying themselves in the sand with only their eyes showing. Here they lie in wait for an unwary victim to venture too close, then erupt from concealment to engulf it.

Invertebrates are the most abundant and noticeable animals in the estuary. While the mangroves and their breathing roots may be covered with sessile organisms, the sandy bottom is home to bivalves such as cockles and pipi. With their acute sense of smell, harbour whelks (Cominella glandiformis) patrol the sand, sniffing out weak or dead animals for their next meal, and a variety of crabs scuttle around, wary of straying too far from shelter.

In the hard bottom of the main channel, a finger-wide vertical hole is the burrow of one of the more secretive inhabitants of the estuary. The mantis shrimp (Heterosquilla sp.)—in common with its terrestrial namesake the praying mantis, to which it bears a modest resemblance—is a predator. Modified front limbs like flick knives move with lightning speed to grab or stun prey—one of the fastest strikes in the animal kingdom. Recent studies of a tropical species of mantis shrimp have revealed the movement is faster than the arm muscles are capable of achieving alone. The secret lies in a specialised spring that adds extra speed.

Although theoretically capable of inflicting a wound to a human, the mantis shrimp is a shy animal that is rarely seen outside its half-metre-long burrow. Patient watching near the entrance is normally rewarded by a glimpse of a pair of stalked eyes and an alien forehead. Fortunately, local mantis shrimps don’t grow any longer than 8 cm. Compare that with a Great Barrier Reef species that exceeds 20 cm. 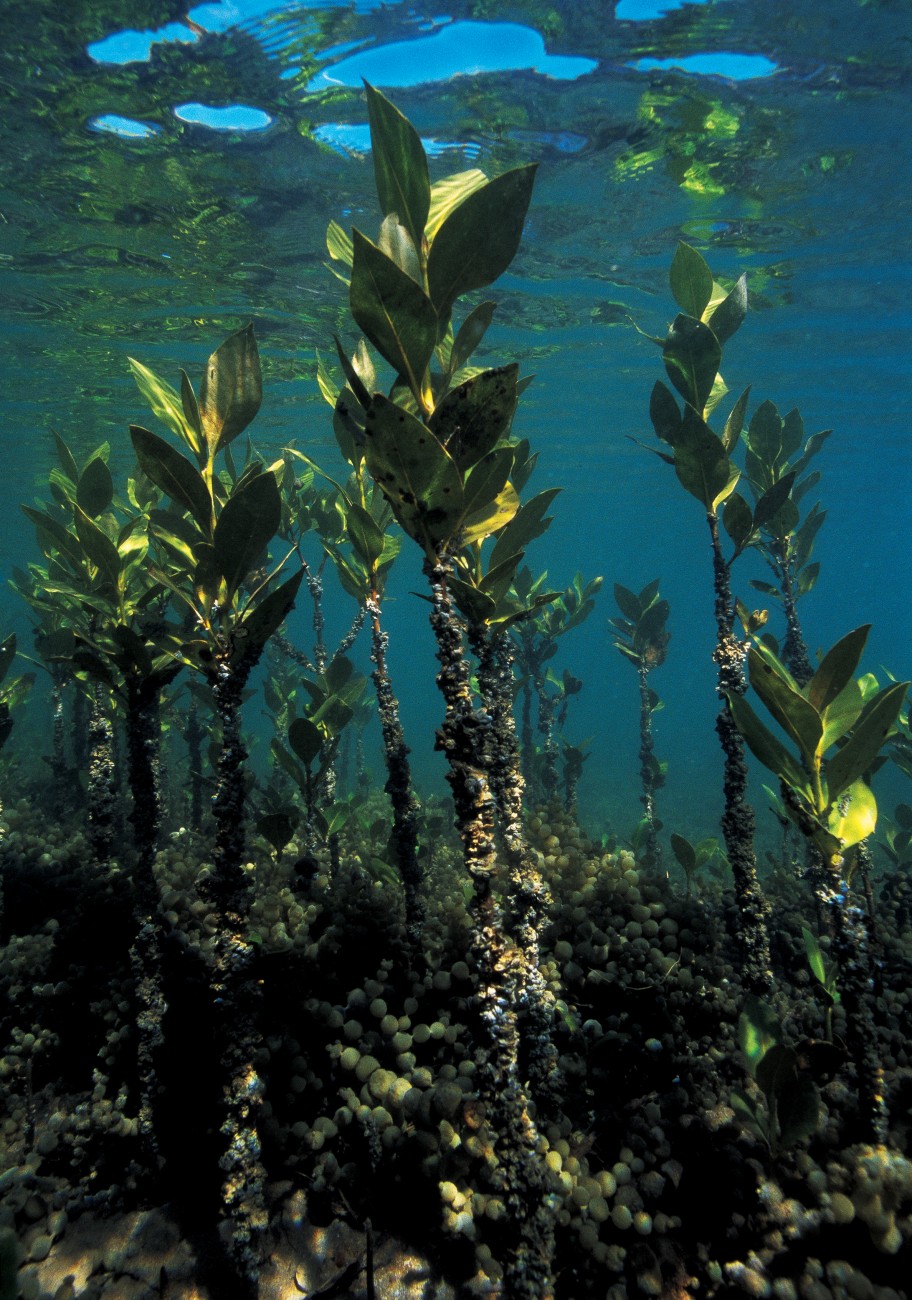 Glass shrimps (Palaemon affinis) are often found inhabiting the branches and breathing roots of mangroves. We have seen several apparently engaged in removing parasites from the skin of a parore that was resting under an overhang in the main channel. If you are patient and hold your hand out, glass shrimps will land on it and start “cleaning” it of surplus particles, including dirt from under your fingernails—nature’s own manicure. Although they have a protective exoskeleton, they are not invulnerable to attack from the ever-present estuarine triplefin. We have also witnessed an injured glass shrimp fall to the bottom, where it was attacked and devoured alive by a number of whelks.

On one foray we encountered a purple rock crab (Leptograpsus variegatus) foraging in sea grass. It tried to take shelter under the green blades while keeping a watchful eye on us. Most active at night, this species is an unusual daytime find at any distance from the rocky crevices it generally inhabits during the day. A close look revealed this one had only a single claw—a reminder of the daily struggle for survival.

One of the most common crabs in the estuary is a small pill-box crab (Halicarcinus whitei), barely a couple of centimetres across at full stretch. Its diminutive size does not deter it from waving its claws in a threatening manner when disturbed. One of our photographs showed three crabs—an egg-bearing female being held by a larger male, and another male approaching. Female Halicarcinus carry their brood beneath them until the larvae have developed sufficiently to be released. She then produces another batch of eggs which are immediately fertilised by sperm she has stored and starts the brooding process again. The female will mate with any male she encounters and stores the sperm until required, however, sperm from the crab she mated just before laying are those that do the fertilizing. To increase the chance of fathering off-spring, male Halicarcinus have developed a mate-guarding behaviour. When a male sees a female releasing her larvae (as this one was), he clasps her with his chelipeds to ensure he mates with her just before she lays her fresh set of eggs. Despite the presence of a male in residence, other males will take a keen interest in proceedings.

One of the bonuses of exploring the Matapouri estuary is that it sharpens the eye. Every day interesting and odd behaviours occur that are unlikely to be noticed by the casual observer. Although the estuary cannot match the Poor Knights for diversity, abundance and sheer magnificence of marine life, relative simplicity can have its advantages. In a simpler community the daily details of life are more readily discerned than in a grander more complex ecosystem. And again and again we find the small details are the most fascinating and provide the most rewarding insights into the web of interactions that charac­terises life in the shallows.

More by Ross and Diane Armstrong

More by Ross and Diane Armstrong