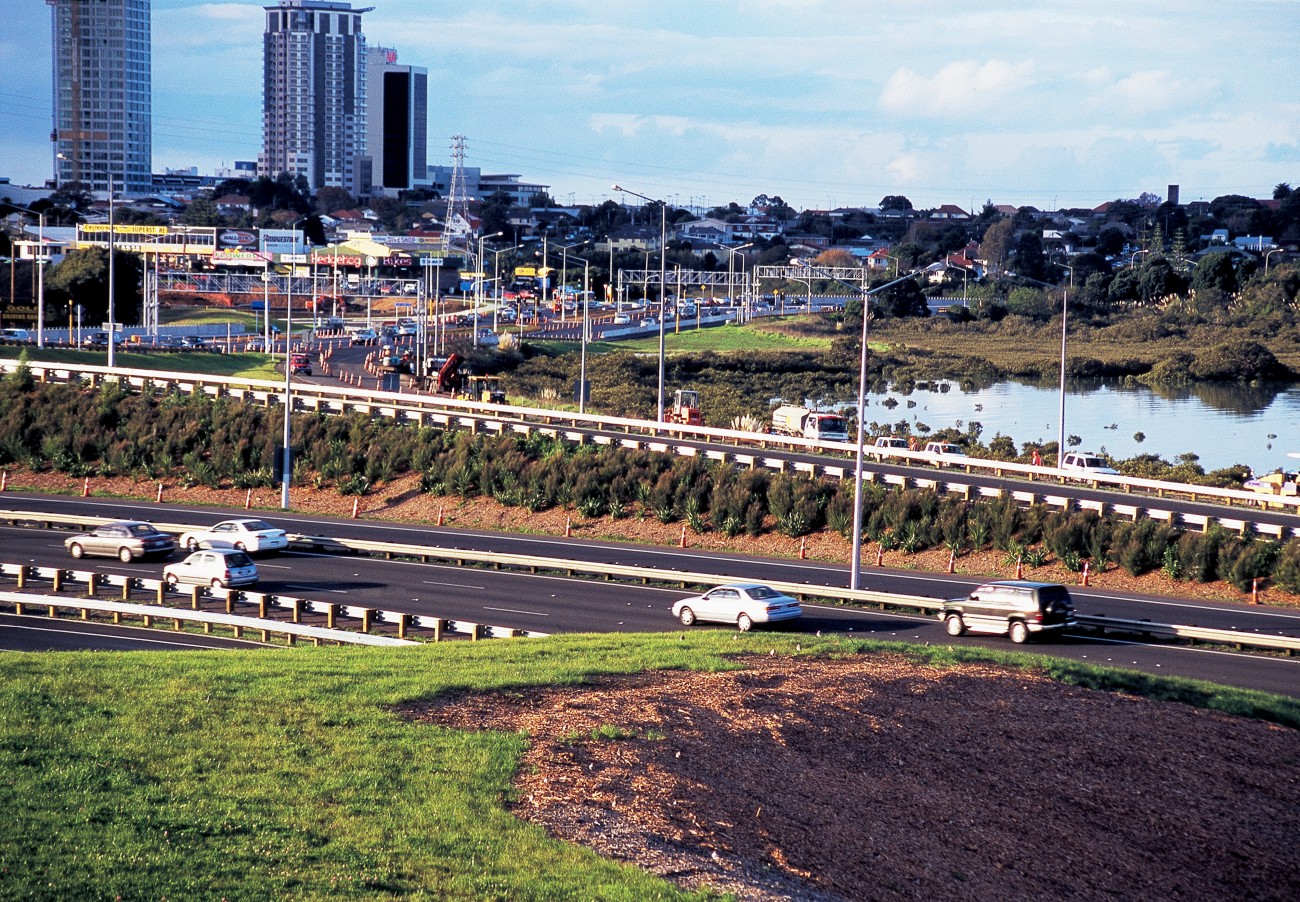 These birds were New Zealand dotterels (a nationally vulnerable species) nesting along the fringes of Shoal Bay on Auckland’s North Shore, but variable oystercatchers and Caspian terns (also nationally vulnerable) were nesting in the area as well. The $30 million plus rebuilding was for a greatly enlarged Esmonde Road‑Akoranga Drive interchange, com­pounded by the addition of extra width being added to the seaward side of the motorway by the elabo­rate northern busway project. In the early 1990s a pair of NZ dotterel took up residence at a beach beside the motorway, and are still there today. In 1998 this pair was joined by another pair of NZ dotterels that attempted to breed within the area, inconveniently within the proposed Esmonde Interchange construction zone. By 2003, when construc­tion works began, the resident NZ dotterel population within the works area stood at 4 pairs.

Transit New Zealand recognised from the outset that it would have to safeguard these birds while at the same time undertaking the extensive construction works. The solution to this birds-versus Busway issue was to build new and hopefully more attractive nesting areas outside of the construction zone. Accordingly, five large raised pads of shell were formed out amongst the mangroves atop an existing low shellbank known as the City of Cork (named for an old shipwreck in the area). Each was a potential new nest site that would be safely above the level of the highest tides, unlike the rest of the shellbank. Once these were finished (using a helicopter to ferry the sand/shell material out to the shellbank) the extensive roadworks commenced.

A few weeks ago in mid-May, Helen Clark officially opened the vast new interchange. What befell the notorious birds that delayed the project? As it happens, the New Zealand Geographic office is only a few hundred metres from the edge of the site, and during a stroll in spring 2006, I stumbled across three or four dotterels. They were attempting to nest on a strip of bank covered in pine bark that was far removed from the prepared pads out in the harbour. In fact, quite a bit of heavy machinery was active on their eastern flank only 30 or 40 metres distant. A couple of pairs of noisy pied stilts looked to be trying to nest nearby beside a temporary pool of water almost under the wheels of trucks. It didn’t look promising.

Eventually I made contact with Dave Slaven of Boffa Miskell Ltd, who was overseeing the birds on behalf of Transit New Zealand, and enquired how things were progress­ing. He explained to me that Shoal Bay is quite an important area for NZ dotterel, even on a national scale. The species consists of two widely separated populations, one in Stewart Island and the other in the northern North Island. The North Is­land population contains about 1300 birds sparsely scattered around the coast. Between one and four pairs (depending on the year) nested along the northern shore of Shoal Bay close to the motorway and, between 1997 and 2002, they had laid 25 clutches of eggs, successfully raising 15 young.

While this seemed an indifferent result to me, it was apparently terrific compared with dotterels elsewhere. Furthermore, dotterels elsewhere were generally being managed to some extent by DOC, whereas the Shoal Bay birds were on their own—to the extent that that is pos­sible beside a motorway. Work by DOC at the managed breeding sites has entailed things like predator trap­ping, and erecting signs and barriers to keep people out of beach areas used by the birds. Despite this assist­ance, dotterels all around the north have almost all been less successful at raising chicks than the dotterels in Shoal Bay, which makes that group a nationally important population.

Why were the Shoal Bay birds doing comparatively well? Although it seems just plain wrong to have a threatened bird living within metres of a major motorway, the wide busy roadway represents a barrier that is quite difficult for cats, rats, hedge­hogs stoats, dogs and even humans to breach. One pair of dotterels so likes an area beside the Onewa Road cloverleaf interchange that they stay there year-round and have in the past have successfully raise two clutches in a single breeding season. Once most dotterels have finished with breeding for the season, they leave the breeding ground to team up with a small flock somewhere along the coast for perhaps February, March and April. Not so the Onewa Road couple which stay put year-round. Maybe they get a buzz from cars screaming past night and day mere metres away. At any rate, once road and earthworks commenced in the area, the dotterels and other birds did start to move around more than in earlier years. More pairs arrived with each passing year, with eight pairs using the western shores of Shoal Bay in the most recent breeding season. Some took to an open hillside below The Warehouse headquarters on the inland side of the motorway—until Forest and Bird members planted it in native shrubs. “Dotterels like a nest site that is elevated with clear views around and short or no vegetation so that nothing can sneak up on them”, Slaven told me. “They don’t like nesting among vegetation that obstructs their view.” Accordingly, a pair also took to the upper slopes of a huge mound of earth on the inland side of the motorway half a kilome‑tre in from the coast. Their presence became a potential problem once the contractors (Fletcher Construc­tion Company) wished to spread the soil around again. However, the works were re-programmed to accommodate them, and the pile was only reduced once the birds departed after breeding. Meanwhile, despite considerable interest during the pre-breeding nest-site prospect­ing, the new shellbank pads at the City of Cork were eschewed by the dotterels as nest sites, although a pair of Caspian terns nested there as did two pairs of oystercatchers. The oystercatchers even managed to raise a couple of chicks. At the same time the shellbanks were well utilised as high-tide roosting sites by a wide variety of birds, including national and international migratory species.

Wrybill, yet another nationally vul­nerable species, are now a regular visitor to them when they are up for the winter.

Over the next few seasons, the NZ dotterel continued to move around and some gradually started to breed on the new shell pads at the City of Cork. In 2006–07, three pairs of dotterels raised three chicks there using the three southernmost pads, two pairs of oystercatchers fledged two chicks, and a pair of Caspian terns also raised a chick. Two different species of bird seem quite happy to share the same terri­tory, and in this case each man­made pad is a breeding territory. The birds I saw further inland were less successful at breeding. A lot of pukeko and myna were stalk­ing around the area and there was plenty of cover for cats and the like close by.

This afternoon—a fine and calm day in mid-June—I went for another reconnaissance around the area. Following a comment from Slaven, I climbed a bank where the motor­way feeds into Akoranga Drive. He had identified this area as a new pre- and post-breeding flocking site for NZ dotterel that nest in the wider Shoal Bay-North Shore area. There, on a grassy hillock below me and completely surrounded by a maze of on and off ramps was a flock of New Zealand dotterels, standing quietly in the weak sunlight. When a car backfired, they took off for a brisk circuit before alighting in the same spot again. The roar and zing of the traffic on all sides seemed not to perturb them in the least. How many were there? On the ground I counted about 18, but in flight there were a few more—perhaps 25­ some taking flight and alighting from over the brow of the hill beyond my sight. Dave Slaven reckons that in the next two or three nesting seasons the five elevated pads in the City of Cork will be occupied by five pairs of breeding dotterels and at least three pairs of variable oystercatch­ers (whose numbers are also steadily rising within the area).

Despite a few unexpected side­steps along the way, the dotterels of Shoal Bay seem to have survived the imposition of the northern busway in good shape and look to be sizing up new estates (both on-and offshore) in the midst of one of Auckland’s largest motorway interchanges. It seems highly unnatural but nature is never short on surprises!