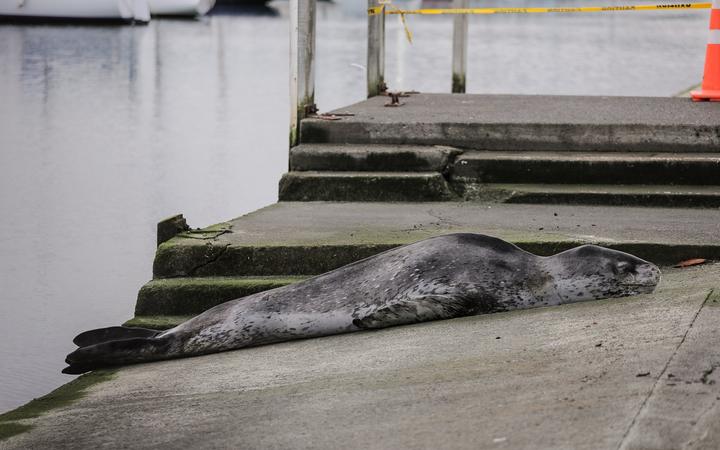 A seal that popped up on Oriental Parade yesterday might choose to make Wellington its new home, according to a NIWA marine biologist

Yesterday morning a large leopard seal hauled itself up onto the concrete outside the boathouses on Oriental Parade.

Throughout the day dozens of people went down to get a closer look at the leopard seal as it lay resting.

Apart from the odd yawn, a large sigh or two, and a kick of his flippers, the large animal lay quietly – delighting onlookers.

Many said it was a once-in-a-lifetime opportunity to see a leopard seal so close up but still in the wild.

Ten-year-old Jessica Chait suggested if the seal did stick around, it could be called Harold.

“That’s the first name that came into my mind,” she said.

It is not that unusual to see the animal in Wellington Harbour, NIWA marine mammal biologist Dr Krista Hupman said.

Her research found leopard seals can actually live in New Zealand, rather than occasionally swinging by from the Antarctic as previously thought.

“We’ve actually proved with a lot of research we’ve done over the past five years they’re actually a resident of New Zealand, because we’ve found them in all seasons, in all regions,” Dr Hupman said.

There was a resident leopard seal in Auckland, which had prompted Dr Hupman to start looking into whether the animals lived here.

There were all sorts of reasons a seal might decide to choose Oriental Bay as a pit stop, she said.

“They can park anywhere pretty much, so any beach around New Zealand, even rocky areas, pontoons at marinas, boat ramps, they can turn up absolutely anywhere.

“We have to remember these animals may have come literally all the way from the Antarctic and its first spot of resting is there.”

While leopard seals aren’t dangerous, people are advised to leave the animal alone and respect its space. If a leopard seal has completed a long trip they want to rest without being disturbed.

People should stay 20 metres away from the animal, and avoid getting between the seal and the water. Also ensure all dogs are kept on a leash.

Dr Hupman said there was nothing stopping the leopard seal making Wellington home, or at least returning to visit, but it could just as easily leave, never to be seen again.