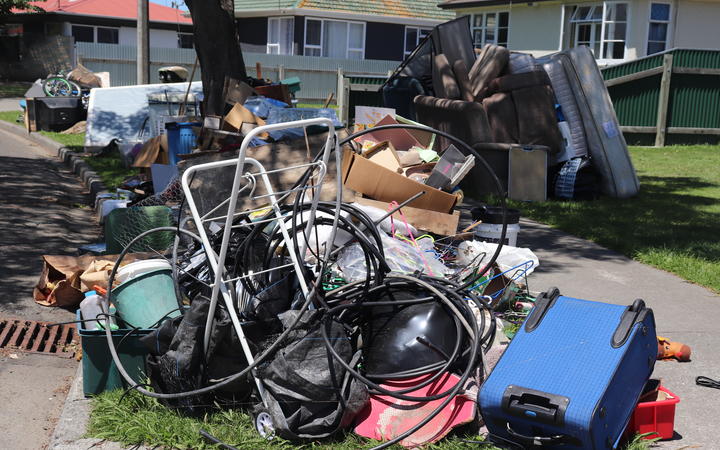 Piles of rubbish have replaced the floodwaters that filled Napier streets last week, much to the disappointment of local residents.

While the water has gone, the clean-up is far from over – adding to the stress of residents who are still managing the storm’s aftermath.

Footpaths in the suburb of Marewa are cluttered with items such as destroyed couches, torn-up carpet, old toys and damaged household goods.

Barker Rd resident Eva Baxter did not understand why the rubbish was there after a big community clean-up last weekend.

“To be honest, it’s quite ridiculous because the thing is, I heard the city council has stopped picking them up now.”

Another resident – Peter, who wouldn’t give his last name – said it had been hard, especially because many had their cars damaged in the floods and could transport the trash to the landfill.

Another resident, Polly Ashby, said it was an ugly sight on the street.

“It’s pretty disgusting, it doesn’t look very nice and it’s not nice to wake up and look at every day.”

The residents RNZ spoke to said the Napier City Council needed to do more to help with the clean-up.

The local taiwhenua’s small team of volunteers was working hard to clean the waste by tomorrow, but it doesn’t have the resources to do multiple runs down the same streets.

Napier City Council said it had asked people to stop leaving flood-damaged waste on the kerb, and rubbish from the floods could be dropped off for free until Sunday at the Redclyffe Transfer Station.

It also encouraged people to see if insurers could cover waste disposal costs.

Meanwhile, a few streets away, the rubbish has been cleared from one of the schools worst affected by the flood, Henry Hill School in Onekawa.

It had its first week back in the classrooms this week but with half the school flooded, there are more children in each classroom.

Year 6 pupil Khulton Trethewey said it was good to be back.

“It’s pretty fun, but it’s pretty dumb how so much stuff got wrecked, there’s nothing to do at home really.”

Principal Jason Williams said it had been a tiring week but the kids were doing well.

“They’re okay at the moment, it’s only been a week but I think they realise as well that we’re all very fortunate to be at school so they’re making the most of it, just like we are.”

Williams said he would be pleased when the clock strikes midnight on 31 December, to put an end to 2020.

“It’s just the unpredictability of things with Covid, with the first lockdown and then with the change of alert levels months later, and now a flood in Napier, who would’ve thought we’d flood?

“Maybe a tsunami, maybe an earthquake but maybe not a flood. So I guess that we’re now just ready for anything and it really just goes to show how resilient and how much perseverance there is in everyone in Napier.”