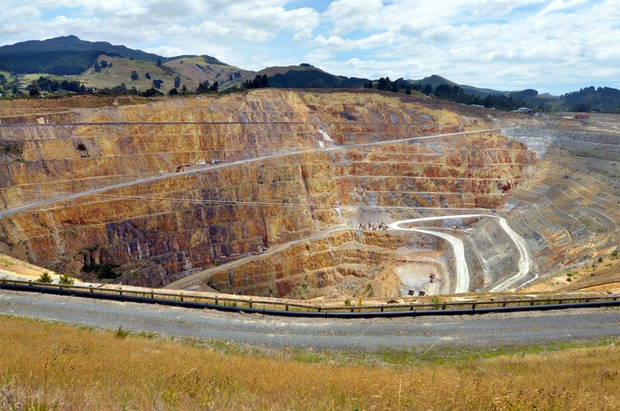 Conservationists say a new open pit mine proposed for Waihi and a large expansion of gold mining operations are not a wise choice for New Zealand communities.

OceanaGold, which has run Waihi’s gold mining operations want to dig a new open pit mine called Gladstone west of their current processing plant, expand the Martha Open Pit mine at the town’s centre, build a new tailings storage facility for waste produced from mining, and create a new rock storage facility.

In a July report the company’s chief executive Michael Holmes says economic investigations show the plans could expand the life of their operations and the number of people employed if they are able to go ahead with the plan.

“The results … show significant socio-economic benefits for the rural communities in the Coromandel region and for New Zealand that can play a critical role in the post-Covid-19 economic recovery.

“With the potential to extend the mine life out to 2036 we can invest an estimated $1.4 billion into the country while adding 300 new jobs.”

But the Coromandel Watchdog group says the industry is “a dinosaur”, and New Zealand should explore new methods for accessing precious metals instead.

Mining electronic waste is a rapidly growing industry internationally, and should be considered as an alternative that could provide job opportunities instead, says the group’s coordinator Augusta Macassey-Pickard.

“Thirty years of mining and Waihi remains one of the poorest towns in the Waikato. Kiwis can see that this industry, while it makes shareholders rich, does little for the community they operate in,” the group said on their website.

However, OceanaGold says they have operated responsibly in New Zealand for more than 30 years and have already delivered significant benefits, including employing 700 people now.

“There will be a chance for people to make formal submissions … and the council will employ experts to assess possible effects like noise, vibration, etcetera, on people and the environment, and any matters raised in submissions.”

The council expects the plan will include new mining close to the centre of Waihi.

“If the project is approved there may be some disruption to the Main Street, such as noise, dust and vibration. However, we would control these through consent conditions and they are likely to be relatively short-lived, until ground excavation works get below the new pit rim.

“Other more positive effects would include improved public spaces, an improved pit rim walkway/points of interest, direct viewing access to a working mine, and eventually a lake for visitors, etcetera.”

OceanaGold’s website shows they hope to begin production from the Gladstone open pit in 2024, and the proposed Martha open pit from 2027, but site preparation work would begin earlier.

They say plans to rehabilitate the mining areas after they are finished are included in their plan.

Critics say underground mining in Waihi creates noise and vibrations that disturb the residents, could leave legacy problems, and devalues their properties.

Previous operators of the mine, Newmont, have perviously agreed to make payments to residents for noise, dust and vibrations.

“The critical path for success is expected to be resource consenting of Wharekirauponga, and surface projects including the Martha Open Pit Phase 5 and additional tailings storage capacity,” Holmes says.

Since 2017 the company has drilled nearly 100,000 metres at the surface and underground at Martha, and about 35,000 metres at Wharekirauponga .