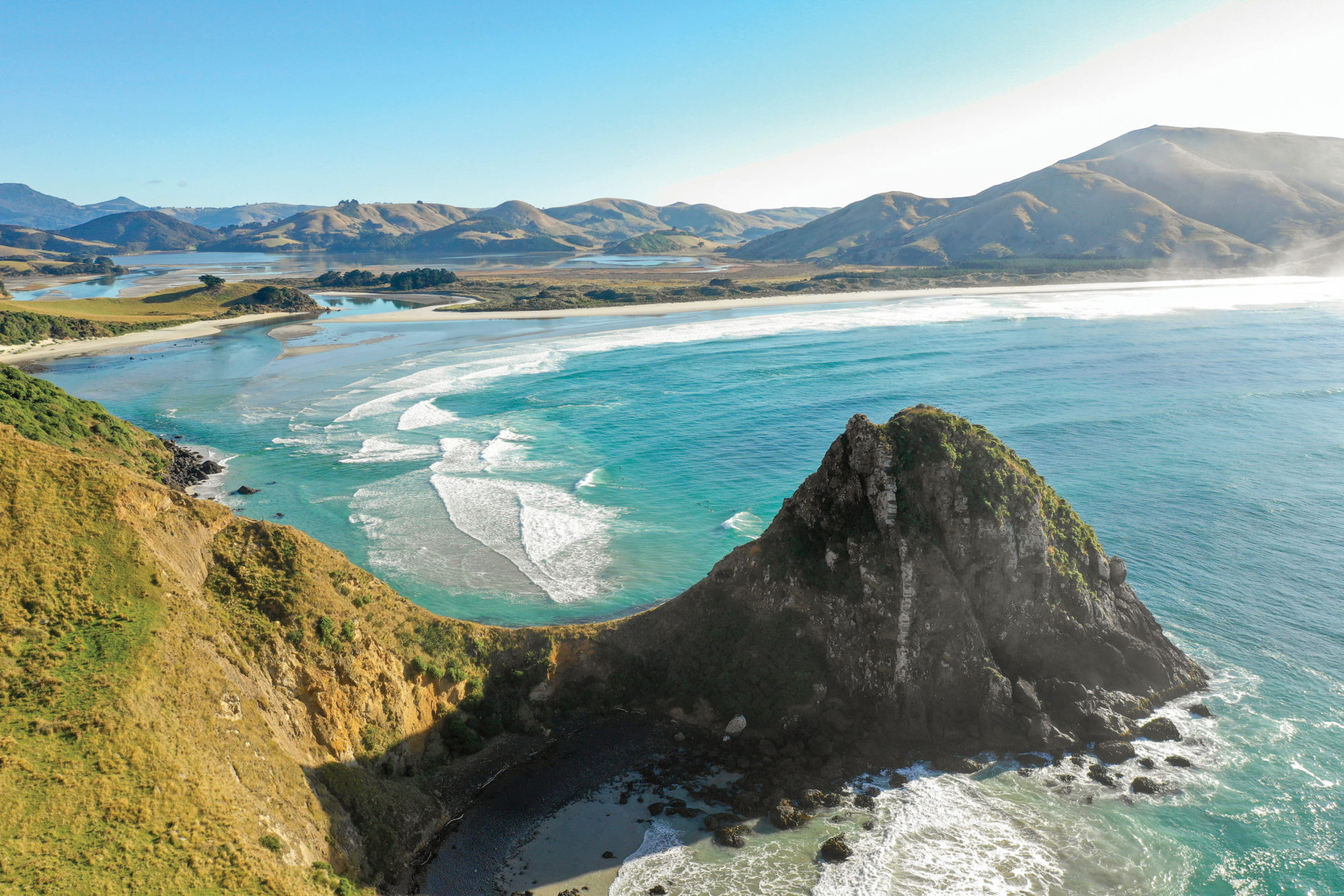 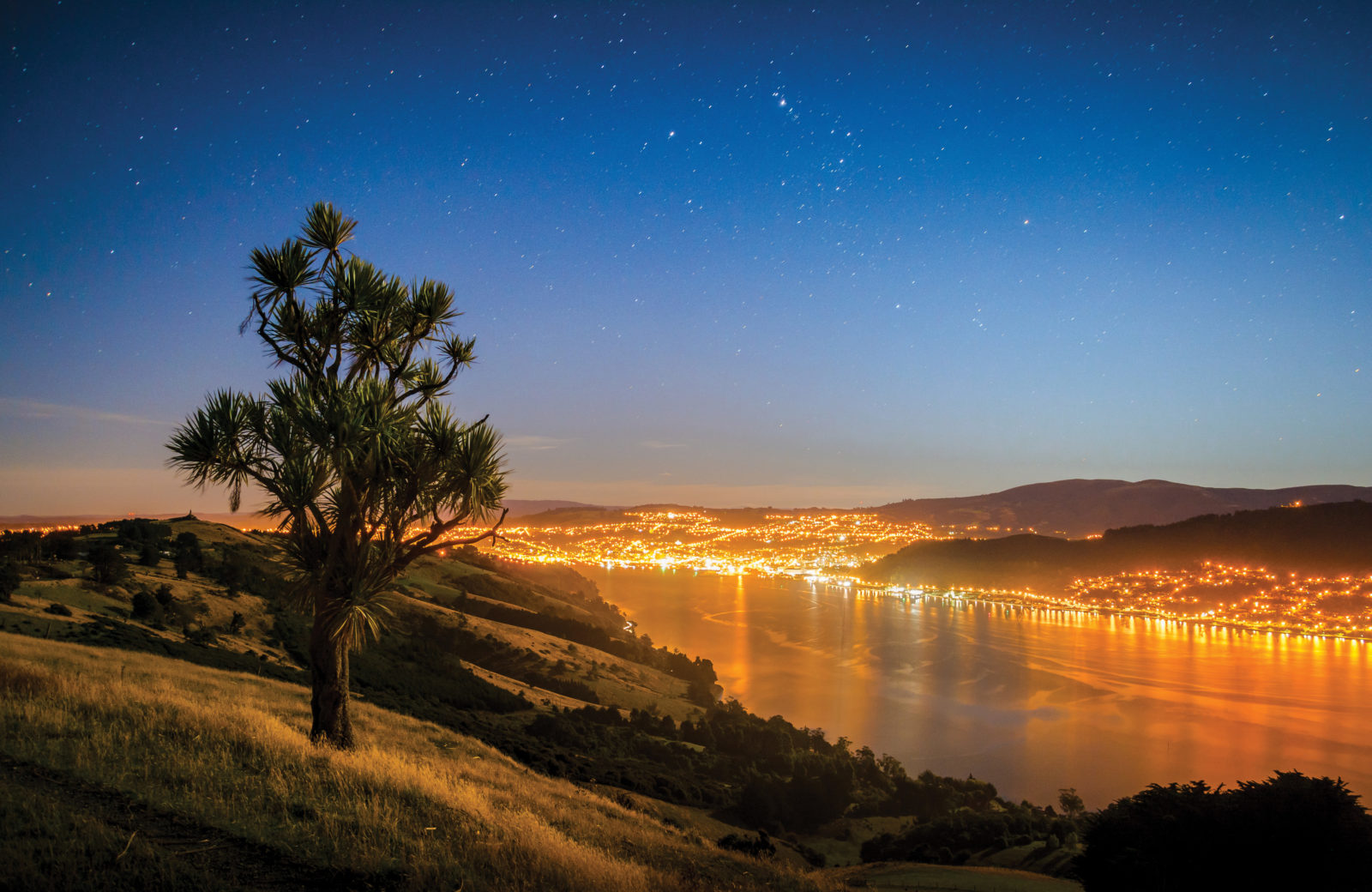 There is only one place in the world where albatrosses nest on the mainland, and it’s no coincidence that it’s a fort. The terraces that were once part of a pā site at Taiaroa Head provide ideal platforms for albatross nests, and the windy, exposed promontory that affords a six-inch gun a view of the sea to ward off a Russian invasion makes a perfect airstrip for incoming adult birds. This season, there are 28 chicks in the colony, with 56 adults coming in to feed them at any one time.

The chicks are sitting on their nests, dotted white across the headland. I walk up to the viewing area and peer through binoculars at their beautiful bulk and serious-looking expressions. Rangers walk among them, picking the chicks up and weighing them as they go.

Royal albatrosses live at sea for four to seven years in their young lives, and the chicks’ first flight will be after the parents have begun to starve them a little to get them out of the house. They will stretch, get up, walk over to the edge, and jump off the mainland to find food, the first and last time until they return to breed. In their years at sea they will circle Antarctica on the prevailing westerlies—a carousel of opportunity that will bring them home again. One male was recorded flying from New Zealand to Chile in just 16 days.

Below the head, on the small curve of sand called Pilot’s Beach, little blue penguin expert Hiltrun Ratz has cleared weeds, built penguin boxes and created a safe place where the public can view her 500 penguins but not interfere with them. She monitors them as they go about their lives—out at dawn to fish, in during the evening to sleep.

“Taiaroa Head was once a fortification against Russia, and now it’s against pests,” she says. I scan some microchipped penguins, closely avoid a bite, and wonder at how much care, money, and attention is lavished on these birds, and how much of the work we do for them is about trying to ensure they don’t notice we’re doing it.

I’m noticing that the Dunedinites working for its native species are warm, open, informed, interesting, and so committed to the deep south. As they talk about the world around them, there’s a joyful, grateful thread to their words, and they seem inextricably connected to the landscapes they live and work in.

At Orokonui Ecosanctuary, longtime volunteer and guide Alyth Grant keeps up a steady stream of information: there are victories, and there are the disappointments. The sanctuary lost its saddlebacks after a stoat somehow got in and three stoat dogs failed to locate her. She was caught exiting her burrow, her mouth holding one of her kits. A close call. They also lost Mr Roto, a friendly kākā who died when he was searching for huhu grubs and a tree stump fell on him.

But the calls of kākā, bellbirds, and tūī are raucous, and I see riflemen, tomtits, brown creepers, and kererū and South Island robin, which look like little boiled potatoes with jackets on, propped up on matchsticks. I’m treated to my first sight of takahē, their plump bodies like bollards against the strong wind.

The night is cloudy, but Kylie Ruwhiu-Karawana drives me away from the city in her Horizon Tours van and out onto the slump of the Otago Peninsula, the city twinkling behind us. Once over the ridge, the moon appears low, full, and orange in the eastern sky, a moonrise like a sunrise. We turn slowly down the hillside, past a tall 19th-century lime kiln, past old drystone walls, along a road that seems nearly at one with the sea, Hoopers Inlet flanked by the perfect outline of Harbour Cone.

We stop at a private patch of farmland. The moon lights the clouds up grey. It isn’t the best conditions for southern stargazing, but I gaze up for the next two hours while Kylie tells me about tātai arorangi, Māori astronomy, and te ao marama, the world of light, and she places the stars into such an expansive framework that by the time I return to the city I felt like something had shifted, as though I’d come adrift from mainland New Zealand, shooting up into the sky and back in time all at once. 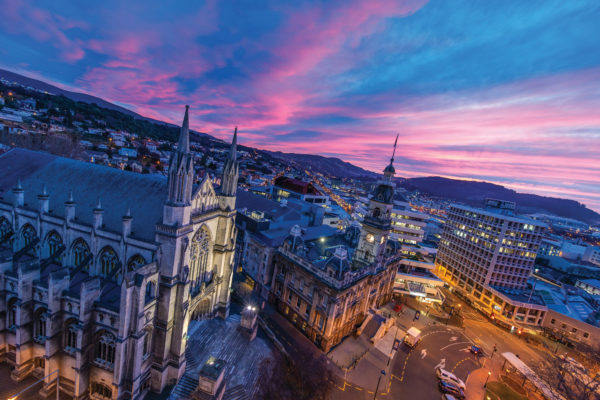 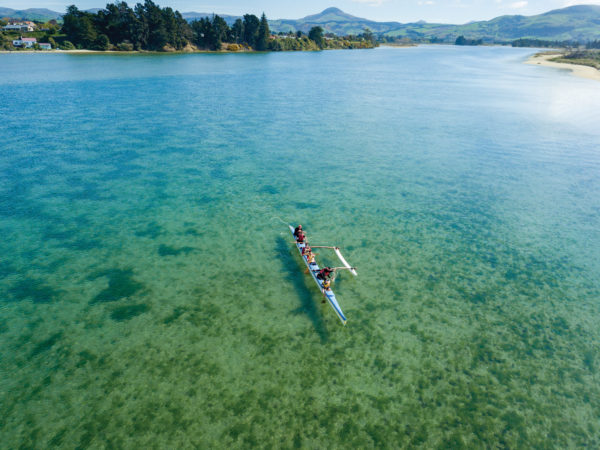 The following afternoon I’m in a handcrafted double-hulled sailing waka, digging my paddle into the waters of the Waikouaiti River in Kāritane, listening to Jesse-James Pickery and Thomas MacFarlane point out the history and features of the land around me, tell me about the flooding of the river, the quirks of the wildlife, the hotel that used to sit on the sandspit Ohinepouwera, the wars that had once been fought here.

On the way back down the river, I drag a toe in the water and try to get the hang of the sail while the boys paddle, and we pull the waka up on the beach at the Karitāne sandspit, where the locals have recently dragged driftwood to trap the sand that is threatening to wash out to sea. We’ve brought three akeake with us, and we find three spots to plant them: it’s part of Karitāne Māori Tours’s work to revegetate the peninsula. The company is run by local iwi Kāti Huirapa ki Puketeraki, and has a 200-year planting plan in place.

“Now you have to name it in Māori,” says Pickery, and I stumble an inept “Um… ‘Te rakau o te waka?’” He laughs. “‘The tree of the boat’. Okay. You’ll be able to come back and find it when it’s grown.”

He points out an old whaling station, and Huriawa Peninsula across the mouth of the river, the first place in Otago to be registered as wāhi tapu by the New Zealand Historic Places Trust.

It is also the site of the pā of Te Wera. Here, a small spring, Te Puna Wai a te Wera, helped the peninsula’s people outlast a siege after a feud between cousins Taoka and Te Wera. (A private bay to launch waka to catch the plentiful seafood had also helped.)

We’re standing on the sandspit where Te Wera’s challenger staged his siege in the 18th century. Only a few hundred years ago, but so much change in between.

On our return to the waka, we nearly stumble upon a sea lion basking on the sand; we’d mistaken him for a driftwood log.

It’s silly to think you can generalise about a place and its people, but one word that’s repeated a lot when it comes to Dunedin is ‘Gothic’. I understand why the characterisation persists: Dunedin’s shabby glamour is like nowhere else.

Ian Conrich writes that New Zealand Gothic “is found in landscapes suffused with dark and perilous beauty; we meet individuals whose suburban masks threaten to slip and reveal a haunted interior; we see how uneasy histories tear through the fabric of the present and fracture our fragile social boundaries. Our Gothic tradition hints at inner demons and buried anxieties that are sensed obliquely rather than seen in plain sight”.

Dunedin’s look and feel evokes the urban Gothic—not just the imposing buildings, but also the long winter nights, the chill, the mist, the empty beaches, the crumbling old cemeteries, isolated communities, a landscape that seems embued with history. The buildings, especially in the newly revitalised Warehouse Precinct, are looming monuments to a time of immense economic confidence and cultural aspiration. Today, this is topped off with good winter coats and new tech companies and recent arrivals who can’t believe their luck.

But mostly, the word that keeps a metronomic beat in my thoughts for the four days I spend in Dunedin is wild. It seems like you could have a good life down here at the edge of the world; a life of curiosity and intrigue, a life of caring about what is important to you.

It’s a city big enough to be interesting, small enough to care, and south enough to be able to raise an eyebrow at the rest of the country, shrug into its coat collar, turn its back, and go out and do its own thing.

A new exhibition at Otago Museum, Challenging the Deep, looks into the technological innovations that have made deep-sea exploration possible, featuring items from director James Cameron’s expeditions and films. Also at the museum, the Tūhura Science Centre includes a butterfly house, tropical forest, and a slide shaped like DNA’s double helix.

The Blue and the Gold