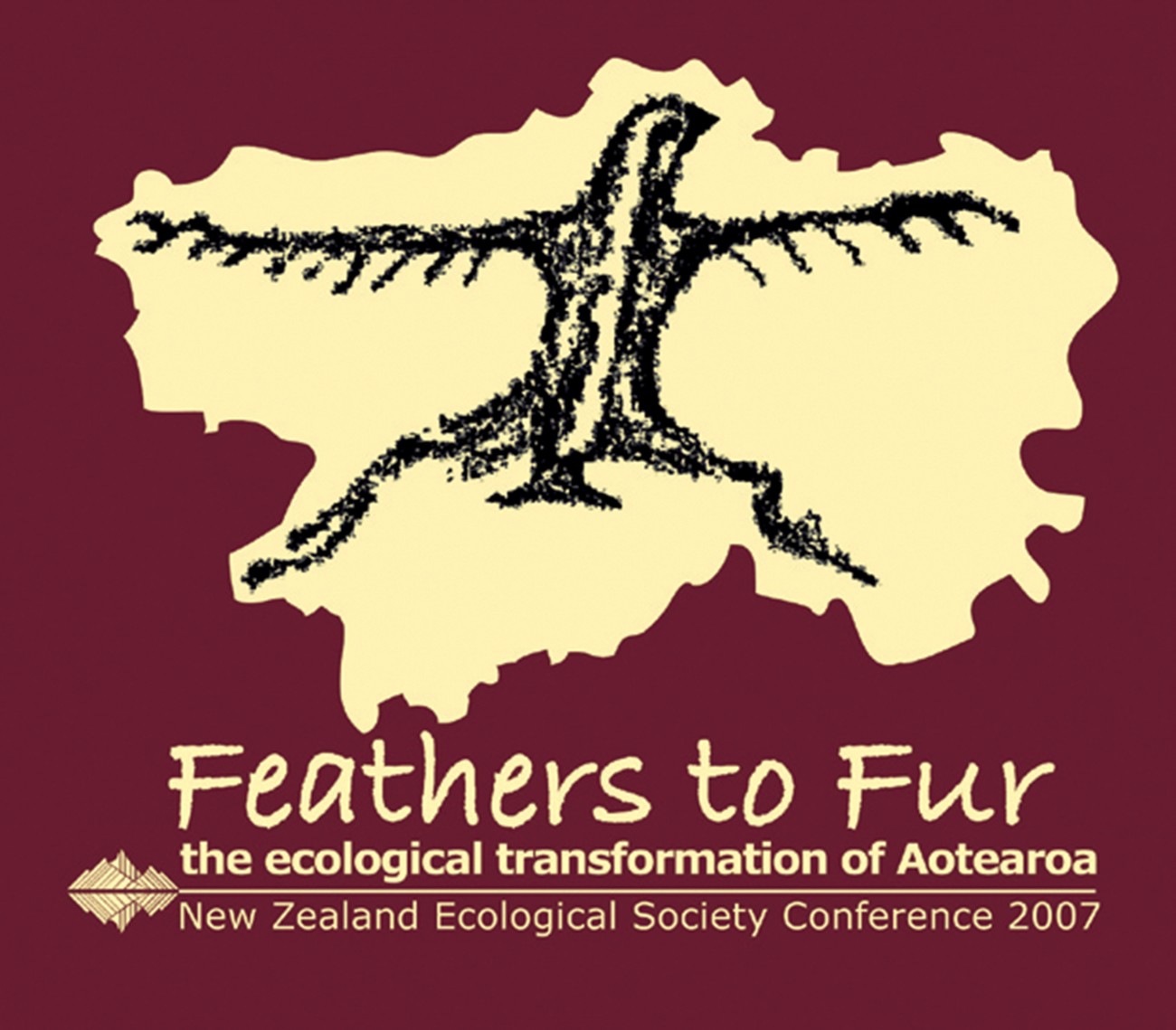 Feathers to fur is a moniker that evokes images of the fashion indus­try and the chic elite, however it was also the title of the 2007 New Zealand Ecological Society confer­ence, held recently in Christchurch. The meeting is a forum where more than 200 ecologists from around the country share research find­ings, set up collaborations on new projects and debate current issues in ecology. This year the main sym­posium discussed the ecological transformation of Aotearoa, from bird-dominated ecosystems to those subjugated by invasive exotic mam­mals and characterised by habitat loss. The conference was in part an update of research presented at an earlier symposium, entitled “Moas, mammals and climate.” The papers from the original conference are available from “http://www.nzes.org. nz” http://www.newzealandecology. org, see issue 12(s). Papers from this month’s conference will be released within 18 months.

The symposium opened with a discussion of insects—not what you might expect given the vertebrate focus of its title. However, the trans­formation from avian-dominated ecosystems to a mammalian empire has had profound impacts on all our biota, even the smallest animals. Insect-eating birds relied on visual cues and movement to detect their prey, whereas mammalian predators hunt using odours and are active both day and night—when most birds are sleeping. Hence the de­fence mechanisms and ecological traits that evolved in the New Zea­land insect fauna to survive bird pre­dation—such as cryptic colouration, freeze responses and a nocturnal lifestyle—are useless against the new foes. Examples of localised extinc­tions, such as giant weta from rat-in­fested mainland New Zealand, were given as a case in point. The change in predation regime is at the heart of the demise of our insects, birds (aptly described as a wreckage of an avifauna with 58 species, 24 per cent of the total, now extinct), changes in the composition, pollination and seed dispersal of plant communities, and the new predators even affect the abundance of native fish.

See was discussed against a background of three periods in the history of New Zealand herbivory. In the first, pre-human era, herbivory was domi­nated by birds, such as the moa, whose droppings (coprolites) show evidence of feeding on at least 64 plant species. Second was a period between the demise of the large herbivorous birds and the arrival of introduced browsers, and the third period has been dominated by intro­duced mammalian browsers. As an aside, a brilliant summary of avail­able data that included the dating of early archaeological remains, sub-fossil kiore bones, rat-gnawed seeds, pollen records and charcoal deposits provided the most comprehensive and conclusive evidence yet of a late arrival of Polynesians to Aotearoa, dated at approximately 1280 AD. As such, the second period in which large herbivores were absent, lasted for at least 400 years.

Two issues concerning plant-her­bivore relations were debated during the symposium: first, are the unusual plant adaptations in New Zealand the result of an avian-dominated plant-herbivore system or an adapta­tion to oceanic climates, and second, are deer the equivalent of moa? The key plant adaptation promoted as a means to resist bird browsing is their filiramulate form (defined as slender, wiry twigs, which may be divaricate, zigzagging, or flexuous) particularly in their juvenile stages. Cafeteria-style studies where emu (close relatives of moa) were presented with a va­riety of food plants showed that the filiramulate form inhibited the birds’ ability to forage for food compared to larger broadleaved plant species.

However, birds are not the only influence on our vegetation as cli­mate can play a significant role. New Zealand’s largely oceanic climate makes it highly suitable to conifer­ous species such as rimu, kahikatea, miro and matai. The regeneration patterns of many conifers are linked to extreme disturbance events such as floods, volcanic eruptions, windstorms and earthquakes. In fact, regeneration patterns observed by determining the ages of trees throughout Westland clearly show the impact of significant alpine fault movements dated at 1450, 1620 and most recently in 1717.

Deer were rejected as a surrogate for moa browsing, despite the fact that they inhabit the same regions as the now-extinct moa and operate at the same trophic level. Deer during the 1950s were at least 100 times more abundant than moa ever were and they remain 10 to 20 times as numerous, the drop due to extensive aerial hunting. Mammalian herbivore pressure is therefore much higher, and likely also uses different selec­tion criteria for palatability, signifi­cantly altering the grazing regime. A second and historically overlooked factor is the trampling effect of deer. The foot print of a deer is twice as heavy on the forest floor as that of a moa, due largely to the small size of its feet. This increased point pres­sure in combination with the greater abundance of deer is a possible ex­planation for the reduced soil inver­tebrate fauna where deer are present in high numbers.

I would like to highlight something described at the symposium as an ecological scandal. It has nothing to do with feathers or fur, but every­thing to do with fish scales and the introduction of salmonid fish, better known as trout. Reports of histori­cal whitebait catches of up to 300 kg from the Hokitika River were discussed, something one can only dream of today. The decline of these migratory fish populations is thought to be the result of barriers (such as dams) to the dispersal of diadromous fish (those with an oceanic phase to their life-cycle) and degradation of habitat in breeding grounds by extensive land clearance. However, for our non-migratory native fish, the principal limiting factor appears to be the presence of trout. Even relatively small trout 15 cm long are capable of eating the entire suite of non-migra­tory native fish, and in many cases there is little cohabitation of native species and trout. A challenge was issued that perhaps the time has come to look seriously at removing trout from some streams.

Diversity equals stability—sound advice you are likely to hear from your local financial adviser and maybe your forest ecologist. A diver­sity/stability debate has raged in the literature for the past decade. Some ecologists believe that a healthy ecosystem requires a diverse array of species to function properly and that the current unprecedented loss of biodiversity could have dire and un­predictable consequences. Analogies have been drawn with an aeroplane that keeps losing a bolt here, or a species there. It will function up to a point, but eventually a catastrophic system failure will result in the de­mise of the plane/ecosystem. Add­ing to this global debate, Eckehard Brockerhoff of the Crown Research Institute, Scion, has shown in a re­view of 119 international studies (see Ecology Letters, 10 (9): 835–848) that increased diversity of tree spe­cies (producers) significantly reduces herbivory by insects (consumers),. The impact of oligophagous insects (those that have a narrow host range) was almost always reduced in di­verse forests compared to mono- cultures, however the response of polyphagous insects (those with a wide host range) was variable. In addition, it appears that tree species composition is more important than straight diversity. Studies of mixed forests showed that a combination of taxonomically diverse species were subject to less herbivory than groups of closely related species. So what are the implications of this research to our forests?

New Zealand’s beech forests are dominated by a handful of closely related species from the genus Noth­ofagus. Natural monocultures (or bi­cultures), beech forests occasionally suffer significant outbreaks of several herbivores, including scale insects, beech buprestids and pinhole borers. The causes of beech forest die back have been intensely debated, as it may be brought on by abiotic pres­sures, such as drought stress. None­theless, the study suggests that the large areas of our native forests—and our plantation forests—dominated by a handful of species are potential­ly vulnerable to herbivorous insects, either indigenous or introduced.

To end on something completely different: how does your garden grow? Angela Moles, a lecturer in plant ecology at Victoria University, has taken a global perspective on this age-old question. She and colleagues from Australia have been researching the twining behaviour of plants, and have recently published their findings in Global Biogeography and Ecology, 16: 795–800. No one has taken a systematic approach to answer the simplest question; in what direction do plants twine? Anecdotal reports suggested that plants tended to form helices that grew in an anticlockwise direction. However, was this a local phenomena or something wider? In a study of 17 sites in nine countries that spanned both hemispheres, Angela found that 92 per cent of all plants coiled anticlockwise. The global synchrony of this phenomena means that traditional explanations such as the Coriolis force (that supposedly determines which way the water flows from your sink) or the celestial path of the sun cannot explain this almost unidirectional twining behaviour. In animals such directional asymmetries have been ascribed to the orientation and operation of microtubules. Microtubules are small subcellular structures that are part of the cytoskeleton, or structure of cells, and modulate many cellular processes. Further research is required to test this hypothesis, however it aptly shows that even the simplest observation can open a Pandora’s box of complex biological questions.