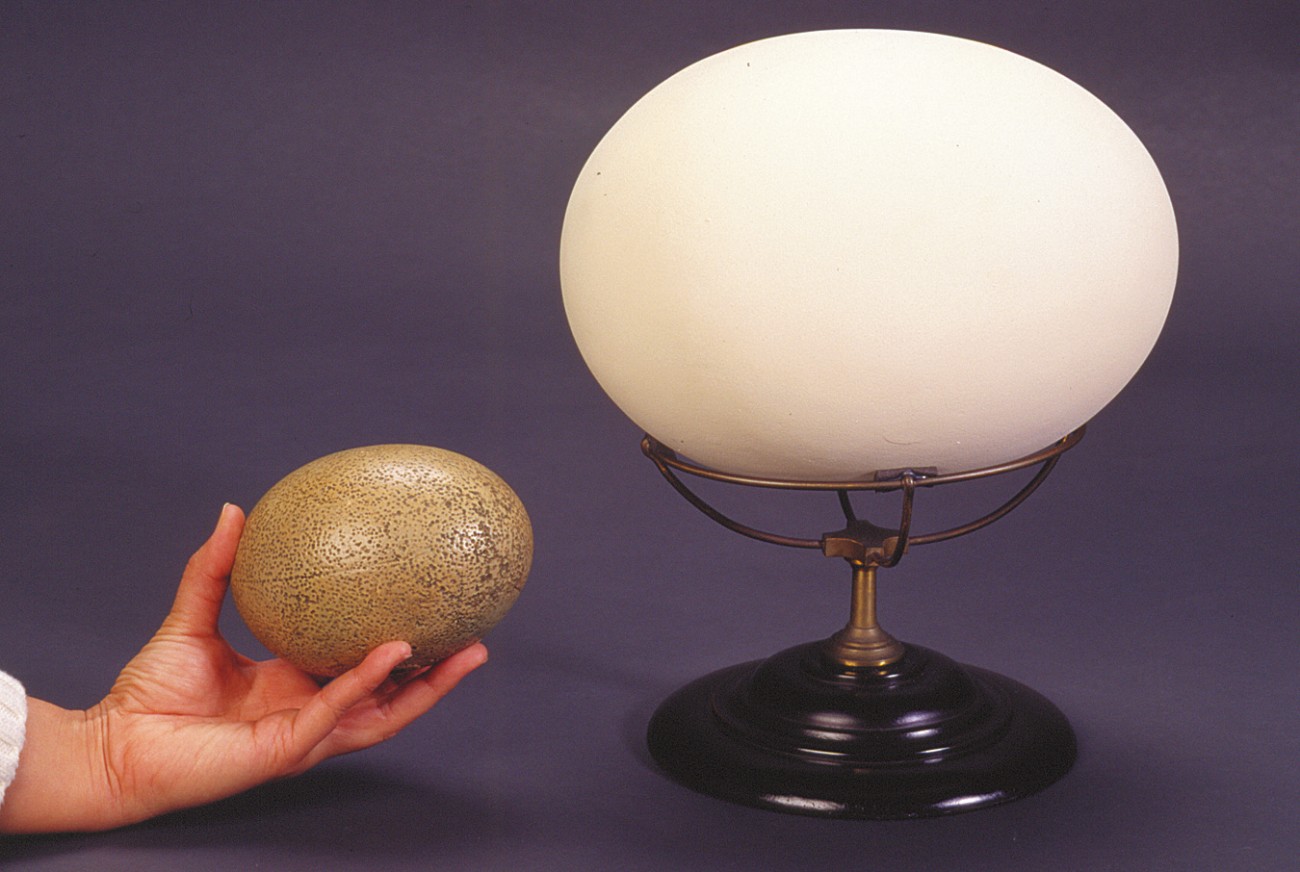 As I write this, Easter beckons and the stores are awash with Easter eggs. Eggs have traditionally been as­sociated with new life and, in Chris­tendom, the resurrection of Christ. In some countries, such as Russia, Easter is the most important festival of the year and eggs have long been a traditional Easter gift. The series of Easter eggs made by Russian jewel­ler Carl Fabergé for several Russian tsars, beginning in 1884, are now the world’s most famous eggs.

However, New Zealand holds a few very valuable eggs of its own—relics of the long-dead moa. Although thousands of moa bones have been recovered from swamps and elsewhere, only 33 moa eggs are known that are sufficiently intact to permit their length or width to be measured. They come from some 15 sites throughout the North and South Islands and all are now in public collections. Four of the eggs are held at the Natural History Museum, London, while the rest are in eight New Zealand museums or research collections, from Auckland Museum in the north to Otago Museum and the University of Otago in the south. It seems that somewhat fewer whole moa eggs have been found than whole eggs of the extinct elephant-bird of Madagascar.

Twelve moa eggs are from archae­ological sites (burials or middens), indicating that they were collected and used during the early period of Polynesian settlement. The rest are from natural sites—alluvial deposits, mud-flows and swamps—to which they may have been washed some distance, and sand-dunes and rock-shelters, where they were probably laid.

Many of the moa eggs are imper­fect, with one or more pieces miss­ing. Others have been reconstructed from fragments found together. The six eggs detailed below are the best examples. They include the largest and the smallest, which happen to be nearly complete, and the four most complete of the other eggs. Four are from the South Island and two from the North. They are all ivory-coloured, as is most broken moa eggshell. A few green moa eggs are known from the South Island, but none is sufficiently complete to make the top league.

Like ostrich and emu eggs, moa eggs are relatively small for the size of the birds that laid them. The kiwi is unusual among ratite birds in laying a very large egg relative to its body size. Yet moa eggs are often larger than those of the brown kiwi (about 130 mm long by 80 mm wide), emu (130 x 90 mm) and os­trich (160 x 130 mm), although they are dwarfed by elephant-bird eggs, which are known to reach 333 x 241 mm. Moa eggs are thin-shelled: even the largest have shells thinner than 2 mm, whereas ostrich eggshell is about 2 mm thick and that of the elephant-bird may exceed 4 mm.

This is the pre-eminent moa egg because it is the largest known—240 x 178 mm. It was also the first to be found—in the late 1850s by a workman digging foundations for a building at Kaikoura. The site turned out to be a Maori grave, and the egg had been placed beside a human skeleton. The egg has a perforation at the narrower end to make it into a vessel, and a portion of it was broken during excavation. The much-trav­elled Kaikoura egg was exhibited at the New Zealand Exhibition, Dunedin, in 1865. The same year it went to London and was auctioned. It passed into private ownership but was exhibited at the New Zealand Court of the Colonial and Indian Exhibition, London, in 1886. It re­turned to this country in 1966, when it was purchased by the people of New Zealand to be a treasure in the national museum (now Te Papa), in Wellington. This egg was probably laid by the largest of the moa, the South Island giant moa, Dinornis robustus.

The smallest of the moa eggs (120 x 91 mm), this was probably laid by the coastal moa, Euryapteryx curtus, a small species whose bones are very common in the sand-dunes behind Tokerau Beach, near Kaitaia, where the egg was found. A local resident (L.J. Matthews) found the egg in about 1900, and kept it in his home for 30 years before an Auckland Museum staff member he helped to collect moa bones visited him. Persuaded of the great importance of the egg, Mr Matthews presented it to Auckland Museum.

This egg, from Kai Iwi, near Wan­ganui, is fairly small (162 x 119 mm) and was probably laid by the little bush moa, Anomalopterx didiformis. It was found in 1931 by A.E. Clut­terbuck at an alluvial site. It is almost complete, and the few damaged areas have been filled with plaster so that it looks perfect.

This egg was probably laid by the stout-legged moa, Euryapteryx geranoides, a medium-sized species especially common in eastern areas of the South Island. It was found in 1911 by a young rabbiter checking his traps on a river terrace at Ettrick, Central Otago. It had been exposed by erosion in a small land-slip. It measures 200 x 138 mm and appears to be intact, but one or more small areas may have been repaired. Some­thing rattles inside the egg, possibly sediment or chick bones.

This egg was found floating in the Clutha River by a workman on the Earnscleugh dredge, near Alexandra, central Otago, in 1899. It had lain buried in the river-bank and been dislodged by scouring when the river was in flood. It appears to be complete, with no visible holes. It was probably laid by the same spe­cies that laid the Ettrick egg, and is of similar size (195 x 135 mm). The dredge-hand was paid 50 pounds for the egg and it was acquired by Otago Museum.

Around 1900 a second egg was found at the Clutha River gold-dredg­ings at Earnscleugh. It measures about 200 x 140 mm and again was probably laid by the stout-legged moa. At one time it was in the private bird collection of Lord Rothschild, at Tring, Hertfordshire, but it now resides in the Palaeontology Depart­ment of the Natural History Museum, South Kensington.

These moa eggs are surely among the jewels in the crown of New Zealand museums’ natural history collections.