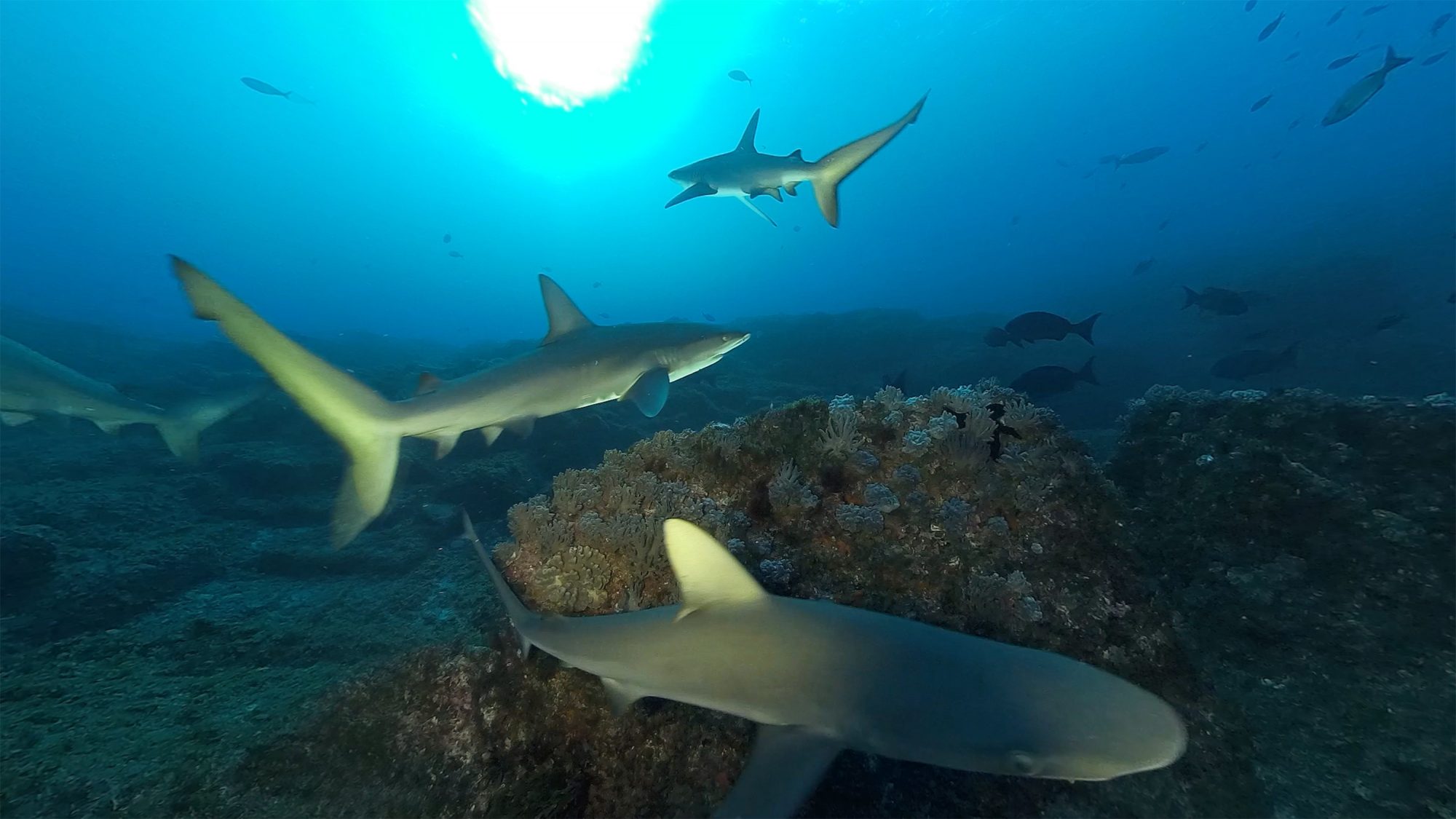 Below the waterline, the Kermadec Islands are close to pristine, and brimming with sharks—the ultimate indicator of a healthy ecosystem.

Galapagos sharks are a constant presence, lurking like hungry dogs around every corner. They won’t worry a diver, but do keep smaller predator fish under control, maintaining a healthy balance on the reef. 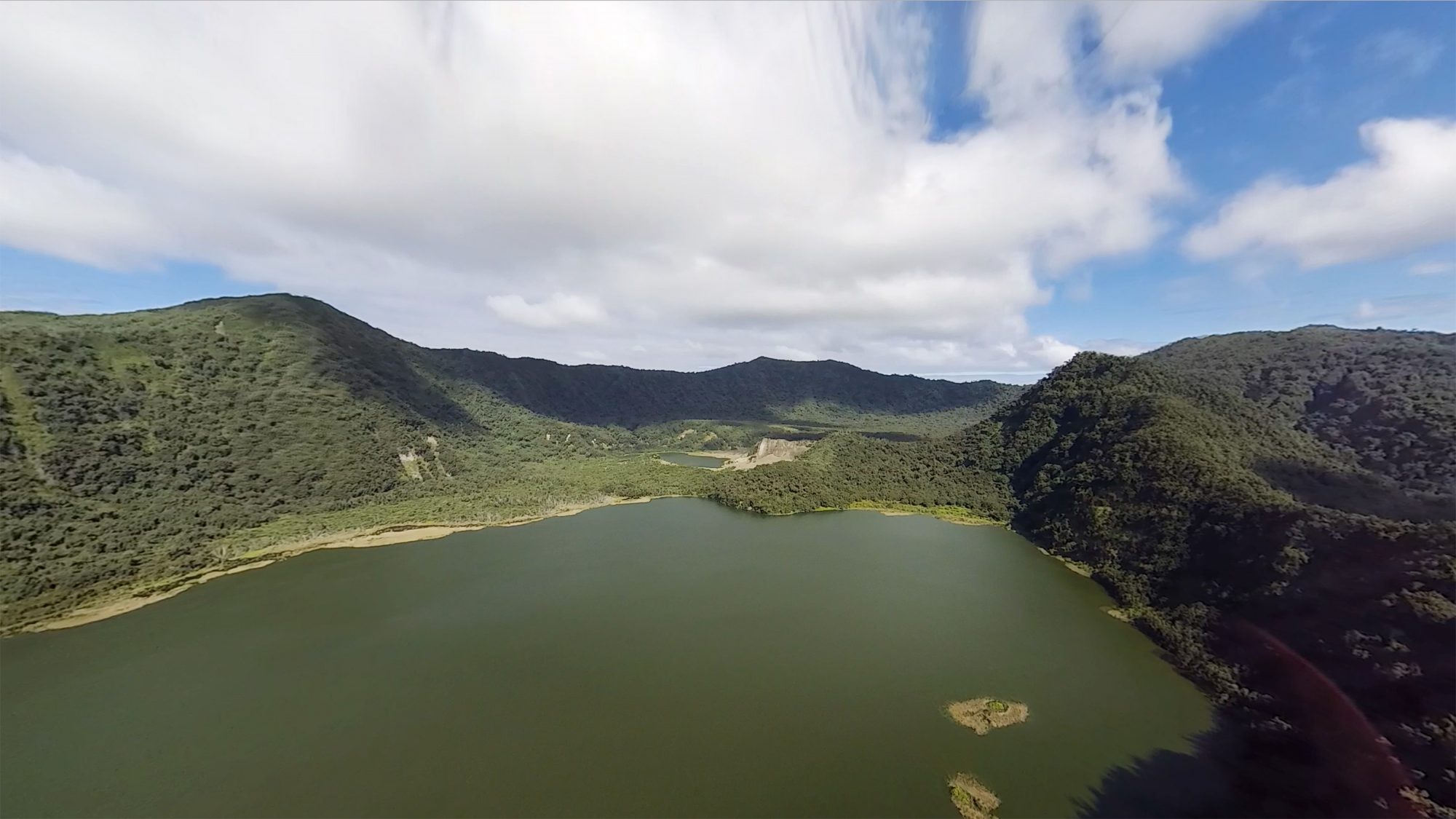 Raoul Island is massive volcanic cone, with a caldera at its centre and two volcanic lakes. Ironically, at present, Blue Lake appears green and Green Lake is blue.

Green Lake erupted in 2006, tragically killing a DOC worker and raising the level of the lake eight metres. 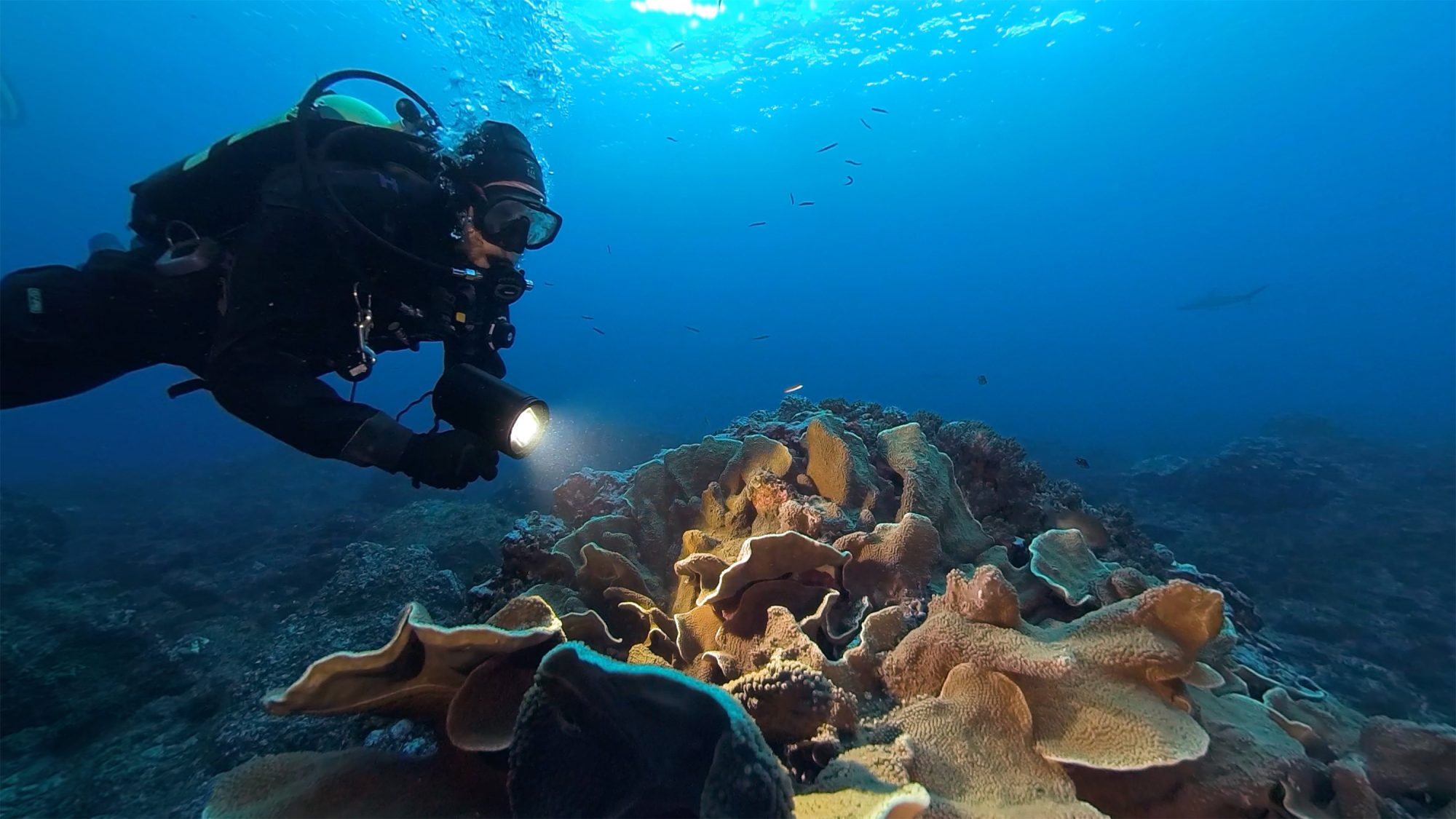 The Kermadecs are the only place in New Zealand with water warm enough to support coral. Here, in a sheltered crook of Raoul Island, a massive plate coral and other species cling to the reef. Coral is actually an assembly of smaller animals, zooxanthellae, and algae living together as a colony. In turn it supports a wider community of small fish and—lurking in the background—sharks. 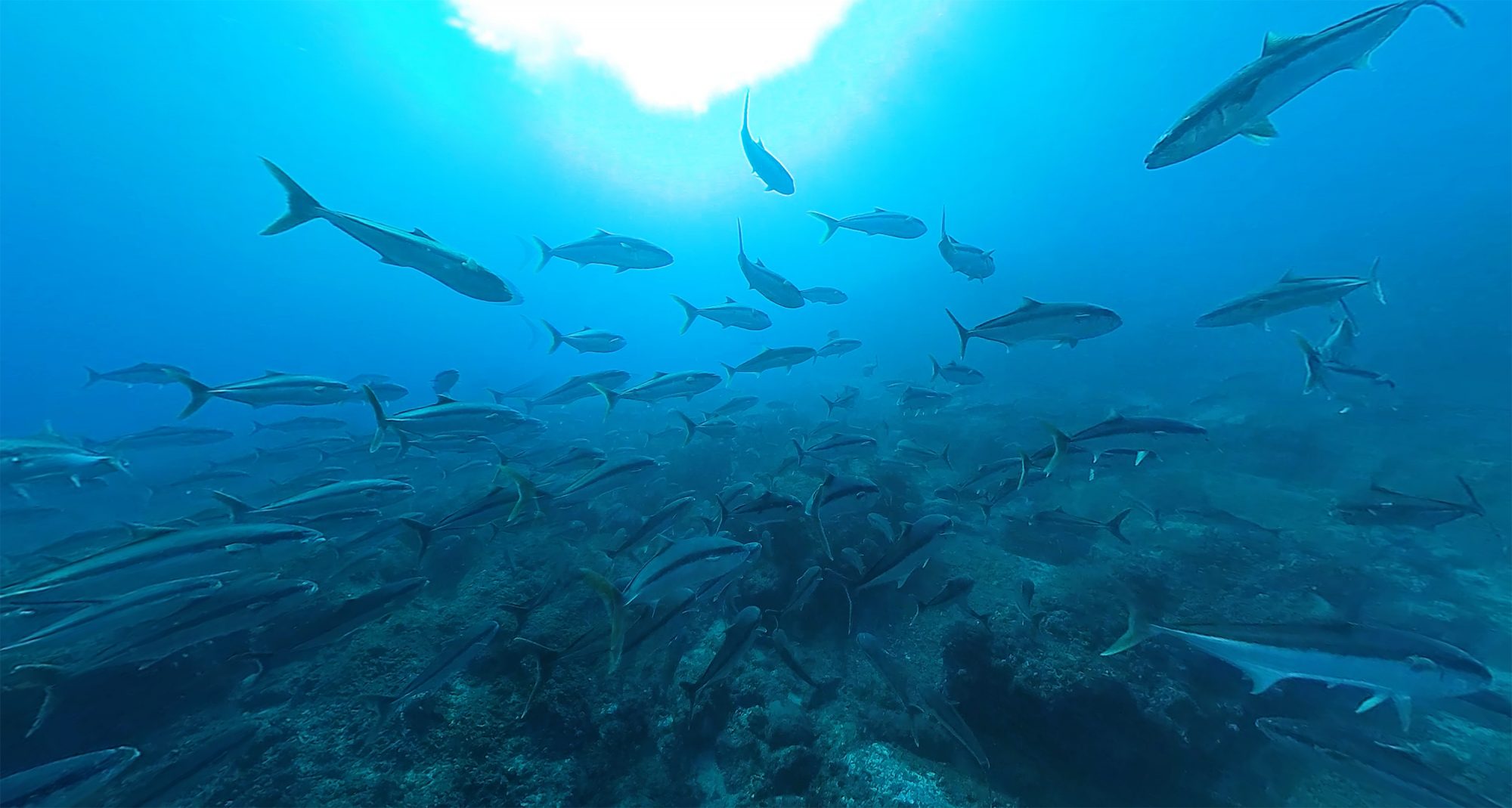 Director of photography Richie Robinson expertly pilots a dive scooter alongside a school of kingfish, thronging in the shallows at Meyer Islets.

Tropical waters are typically less rich in nutrients than the temperate water around New Zealand, meaning less baitfish are available. As a result the kingis can be more slender, and often turn to eating juvenile petrels.

The pristine waters around the Kermadec Islands need protection from fishing, mining and other extractive activities. The 620,000-square-kilometre Kermadec Ocean Sanctuary was announced in 2015, but has been stuck in a legal battle with commercial fishers ever since. 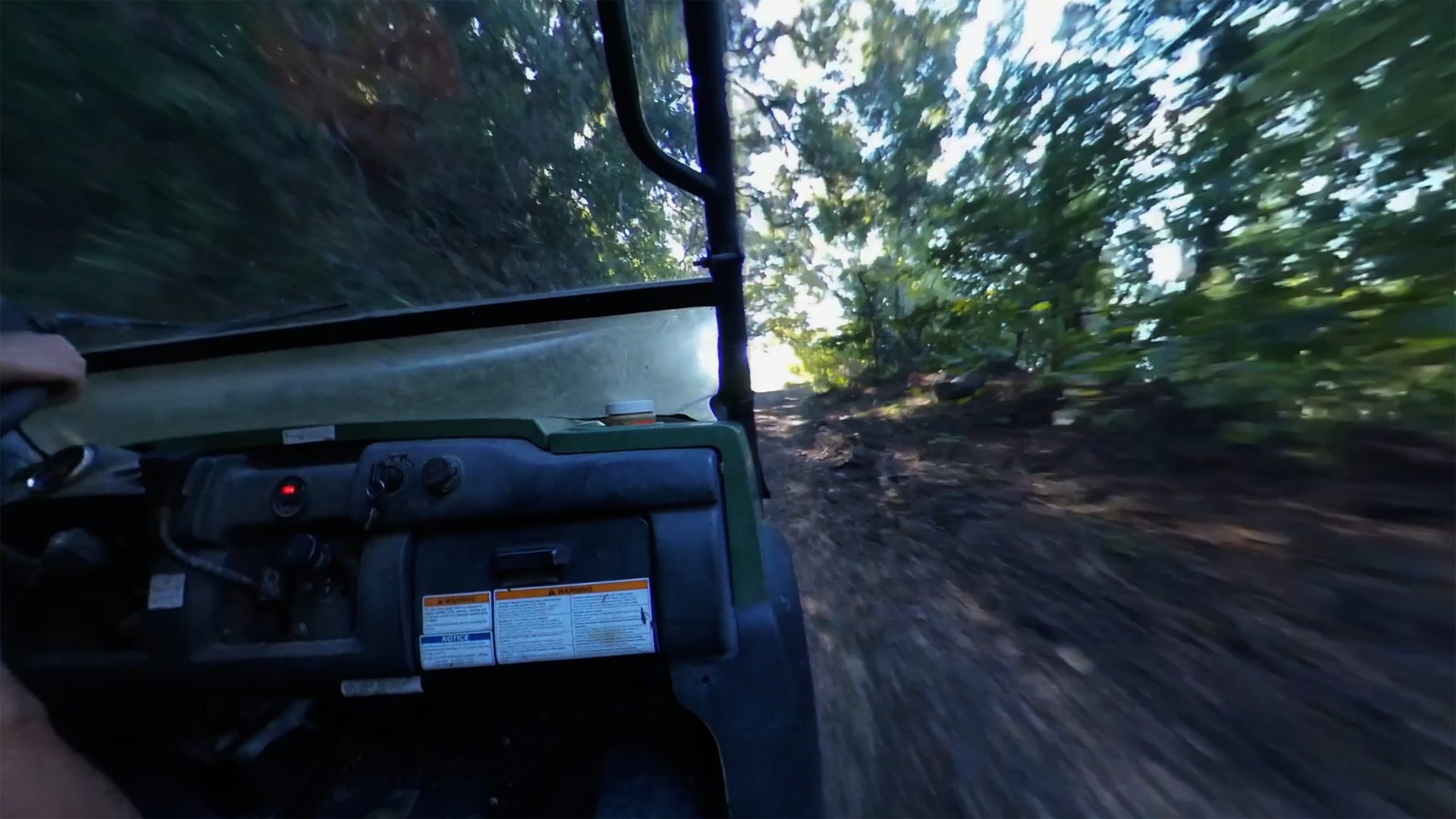 Hold on to your hat, you’re riding a mule—four-wheel-drive all-terrain vehicles that can navigate the narrow, bush-cloaked goat tracks that are Raoul’s autobahns.

At nearly 2900 hectares, it’s a large island, and every day DOC rangers criss-cross the rock for surveying, monitoring, weeding, and tending to the island’s infrastructure. There are seven on the island, rotating on 6- or 12-month tours of duty. 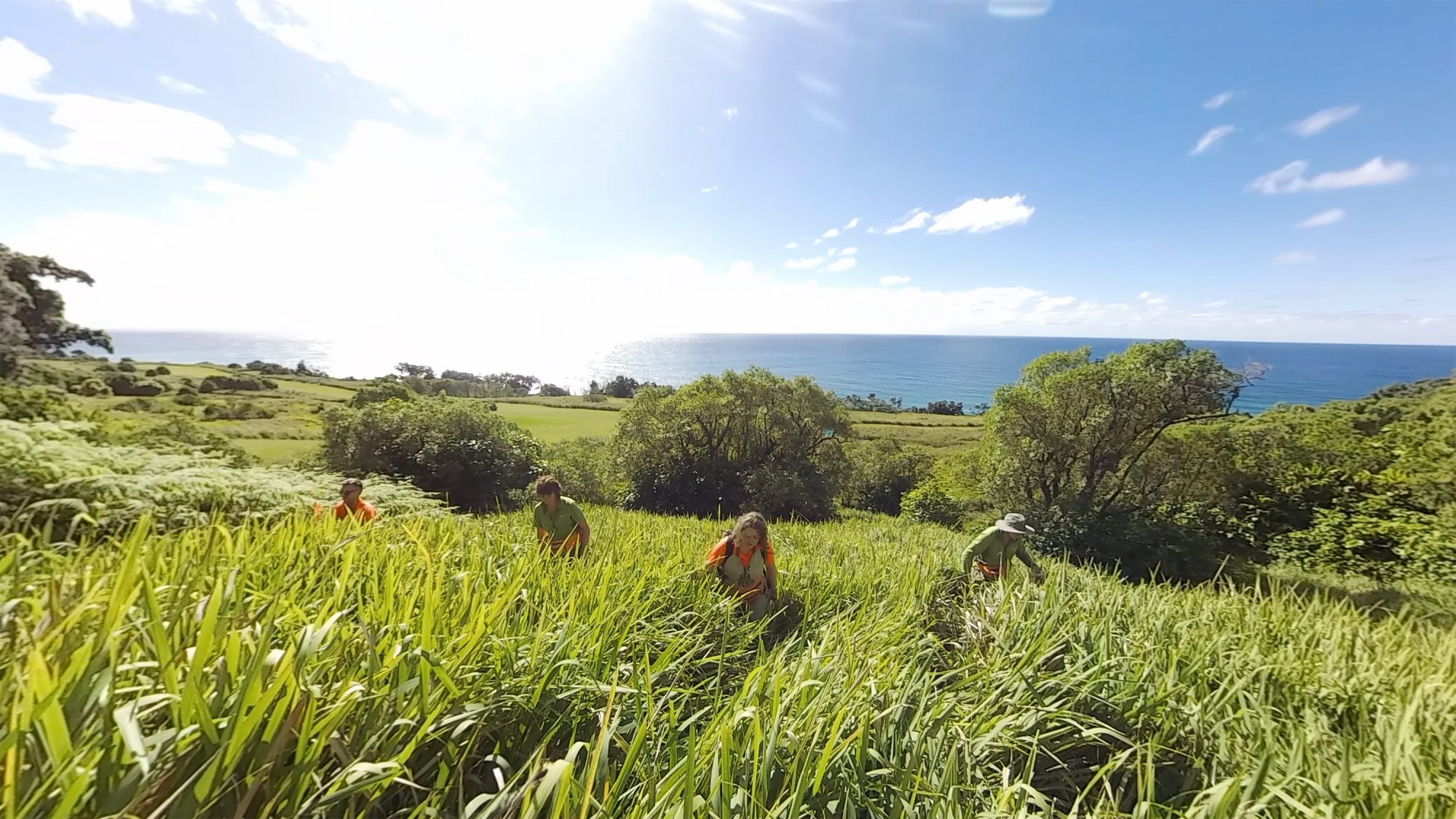 After the 2002 predator eradication, Public Enemy #1 on Raoul is no long rats, but weeds—Mysore thorn, black passionfruit, buttercup plant and two species of guava. It can be heavy-going buffalo grass, and even more difficult on the steep cliff faces which harbour Madeira vine. To date, only one species has been totally eradicated, but many weeds have been dramatically reduced in coverage.

In 2017 a menacing pathogen was discovered on the island. Myrtle rust now threatens the island’s endemic pohutukawa forests, creating biosecurity concerns both inbound and outbound.

Take away the limiting factors, and in most cases, the environment will recover. Where permanent damage has occurred, nature will find a new balance, and new species will fill old niches. 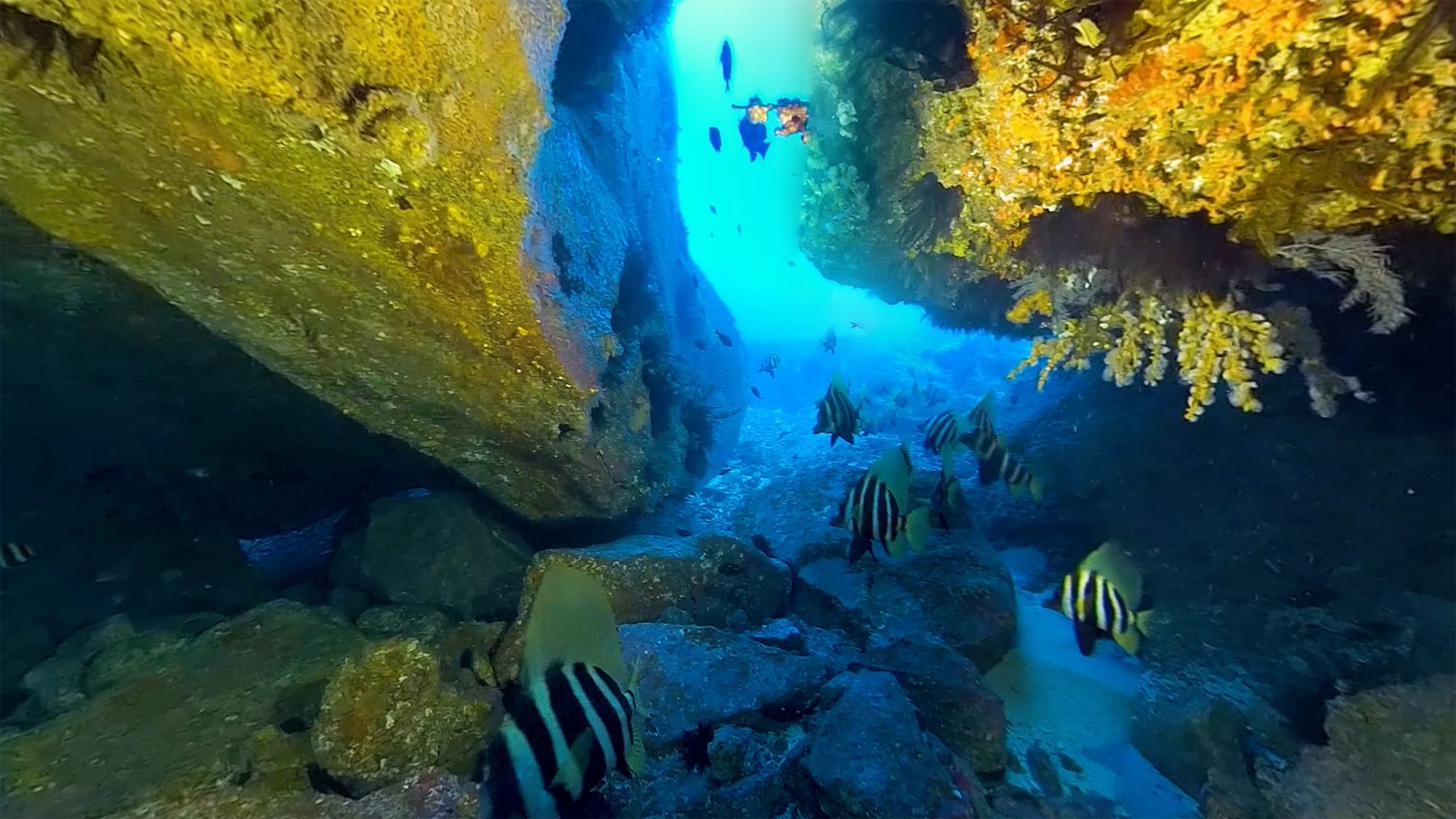 A small school of boarfish linger in a crack at Parsons Rock off the heaving surfline of Denham Bay.

Tropical fish larvae reach the Kermadecs on ocean currents from the north, but also the south—travelling from Australia’s Great Barrier Reef across the Tasman and past the northern tip of New Zealand. Each year brings new larvae, and fish never seen before at the Kermadecs. 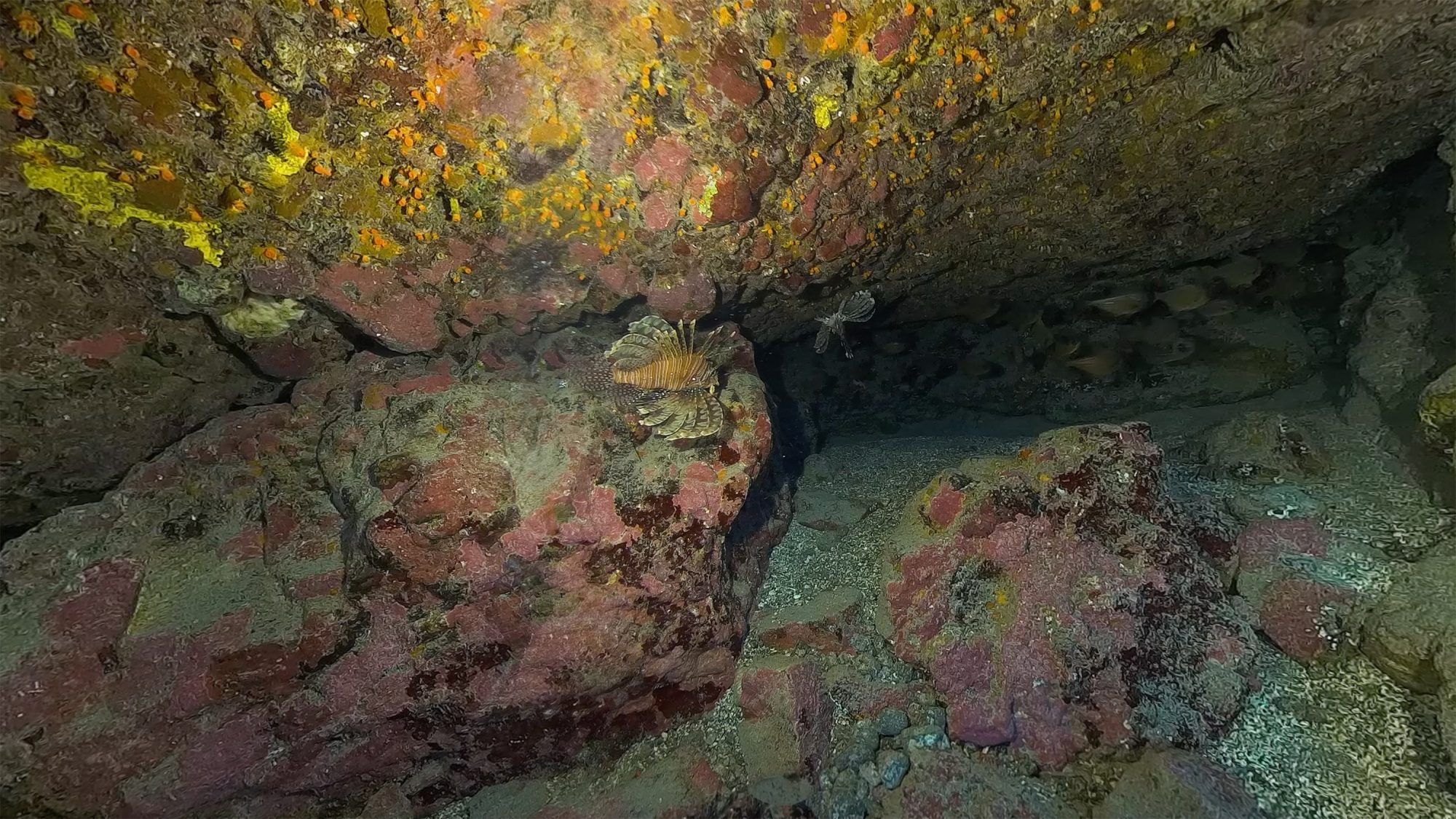 Two lionfish, trailing their elaborate manes with 18 venomous spines, linger in a cave with slender roughy and yellow-banded perch.

Listen carefully, you can hear the echo-location clicks that allow roughy and bigeyes to navigate in the darkness of the cave.

The Kermadecs are not as remote as they once were. The long arms of climate change are altering sea temperatures and acidity—a particularly concerning factor in a location where coral is already on the edge of its range. 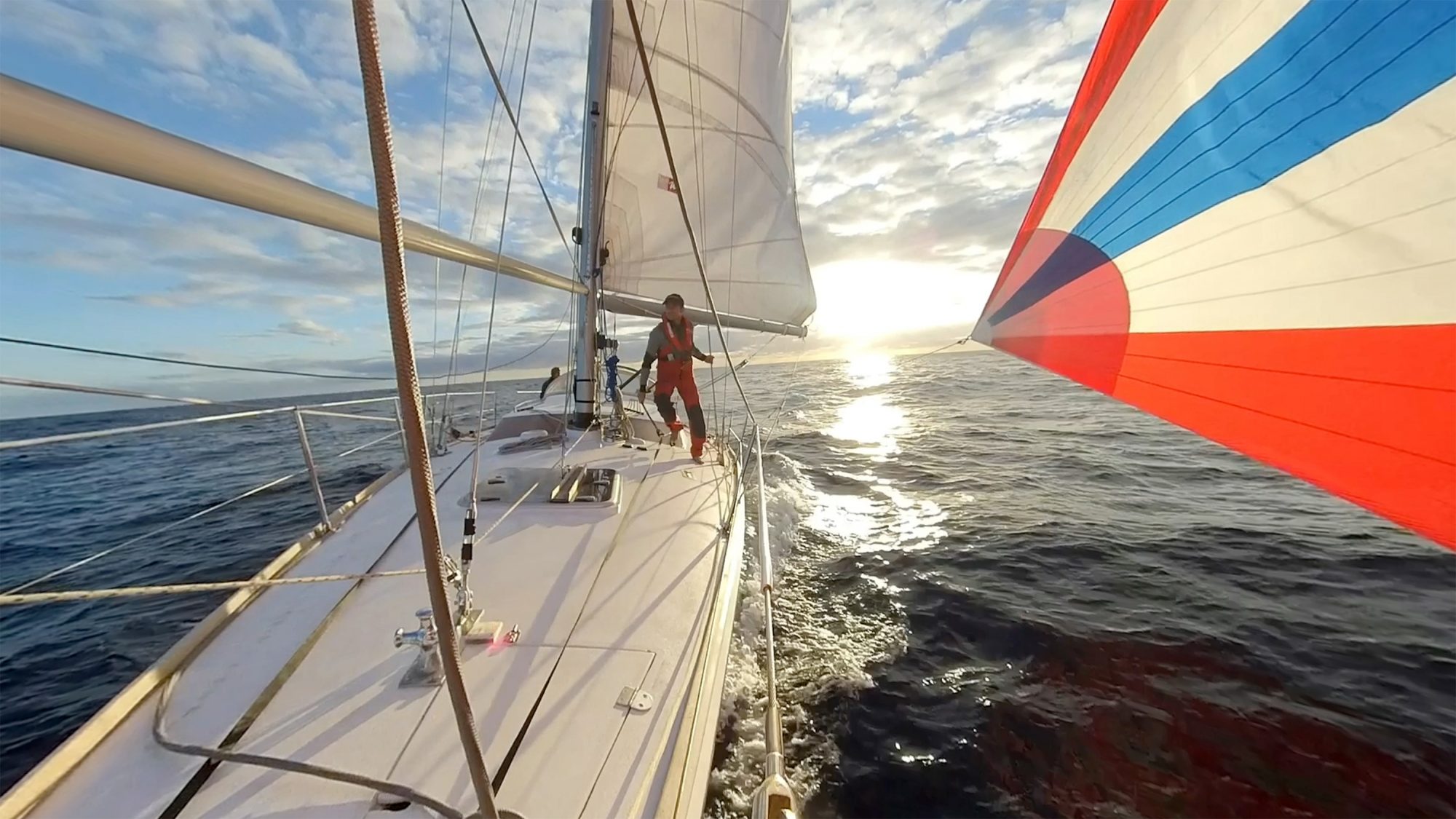 A good northerly on the quarter makes for easy running home. Point the bow south-west, and follow the Kermadec Ridge for a thousand miles towards the blue horizon. Some days the light will be sharp and the conditions benign, other times the boat will be a rollercoaster careening on the edge of control.

Six hundred nautical miles from the mainland is far enough to protect the Kermadecs from the ravages of most fishing, invasive species and pollution. And it makes the prospect of prospecting less likely too… But it’s not far enough to escape the reach of climate change which threatens to change the chemistry of the ocean itself. Our decisions over the next 10 years will determine the fate of these islands forever.