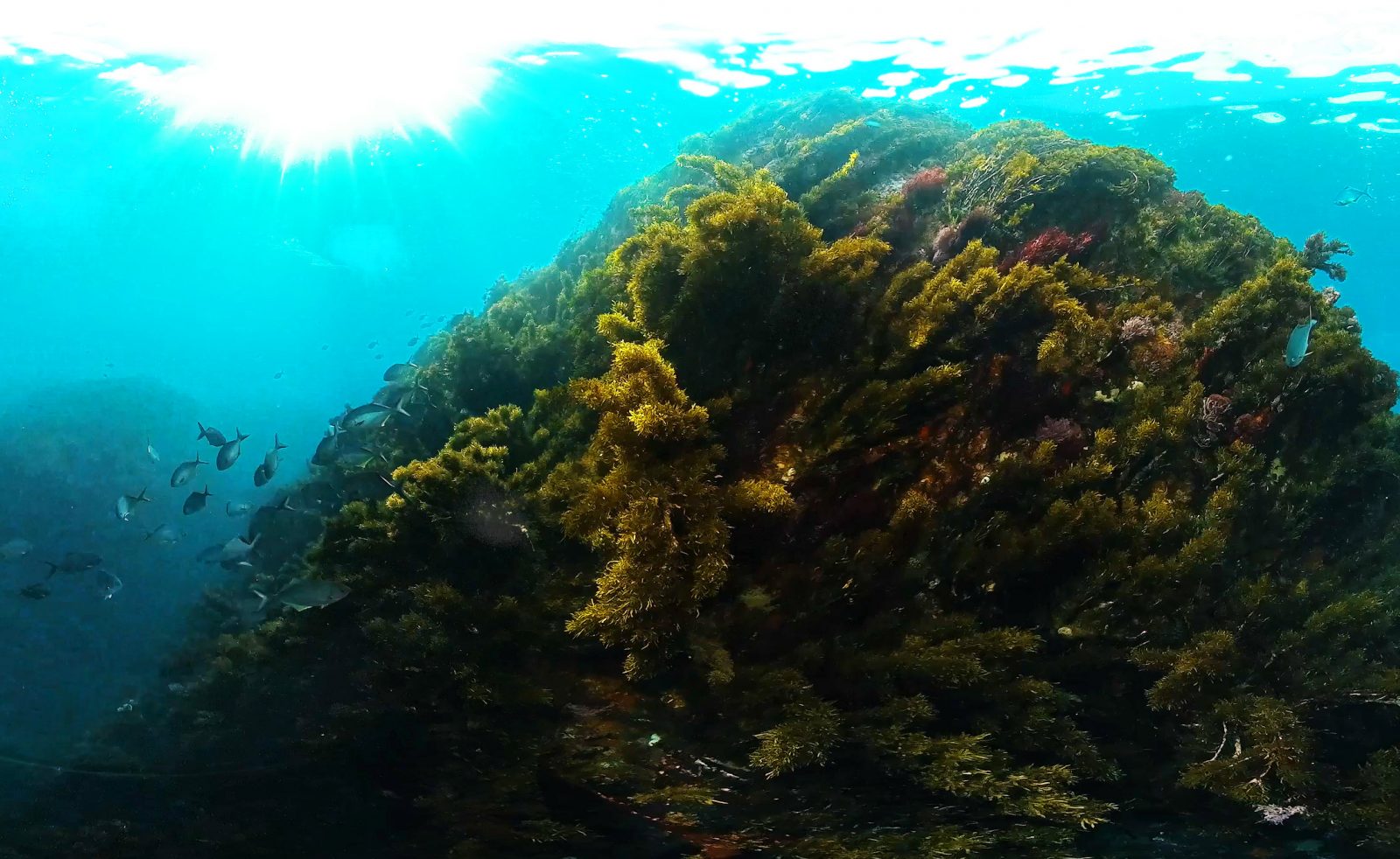 The Three Kings is unusual. It has one of the highest rates of endemism in New Zealand, which is to say the things that live here are found nowhere else.

In Crater Bay, feathery arms of sargassum weed—unique to these islands—wave in unison, marking the motion of each swell like a hypnotist’s watch. Tangled in the fronds are pink tufts called epiphytes—the only known member of their family in the entire southern hemisphere. Blue maomao flutter in mid-water like a ticker-tape parade.

Watch what you eat

There is very little data on the population and distribution of hāpuku, a large fish species caught on the King Bank (and elsewhere). It is very likely not a sustainable fishery. 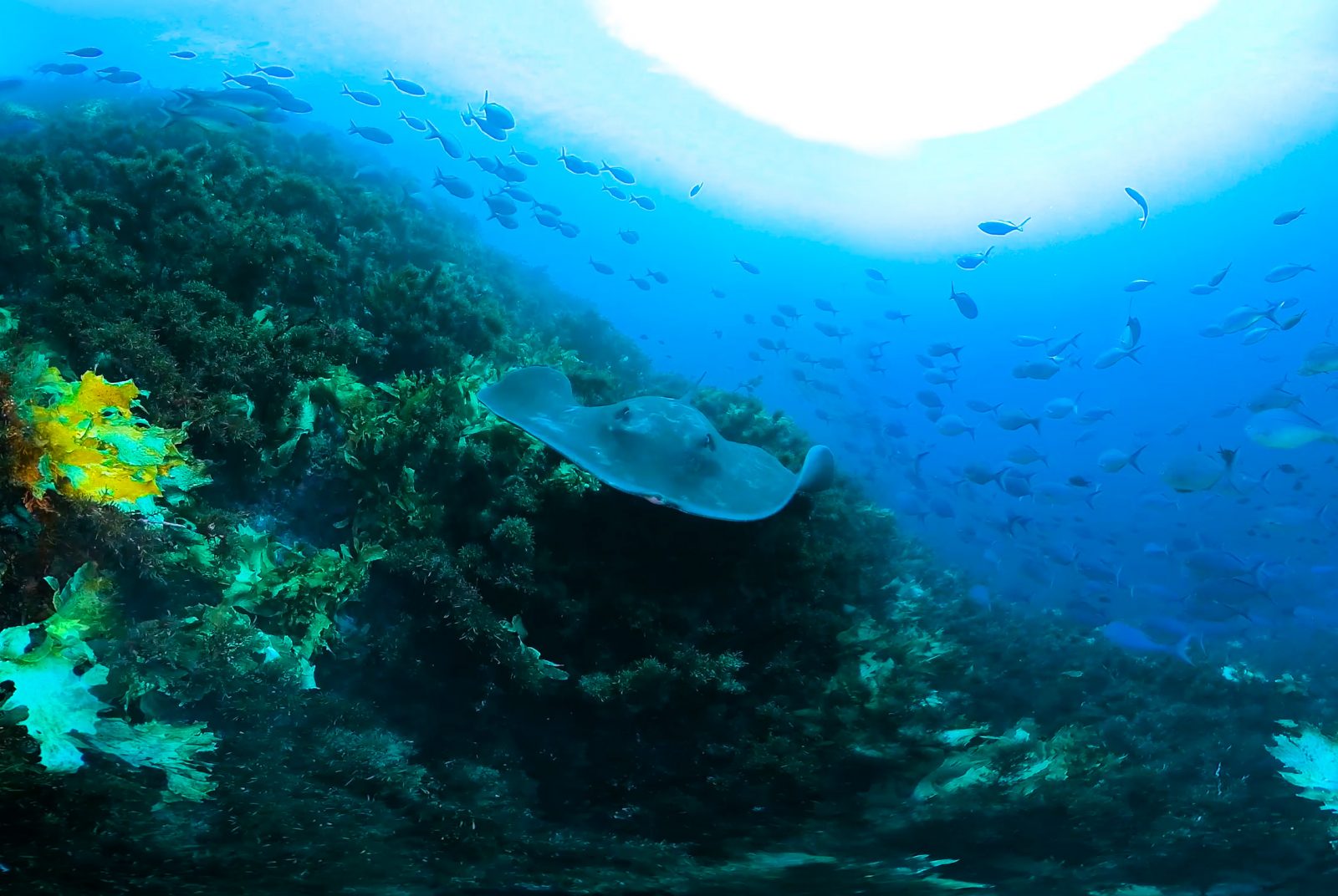 Swim with a stingray

Landsbergia Rock is cloaked in a diverse forest of weeds, one of which is only found on this single rock. Swarms of maomao circle above and a short-tailed stingray gets spooked by the camera! The size of a table-top, these rays are found throughout New Zealand.

The Three Kings are a wildlife reserve on land, but not in the water. As a result, marine life is exploited by fishing charters every summer. The charters are well-intended, but have a significant impact on the ecosystem. 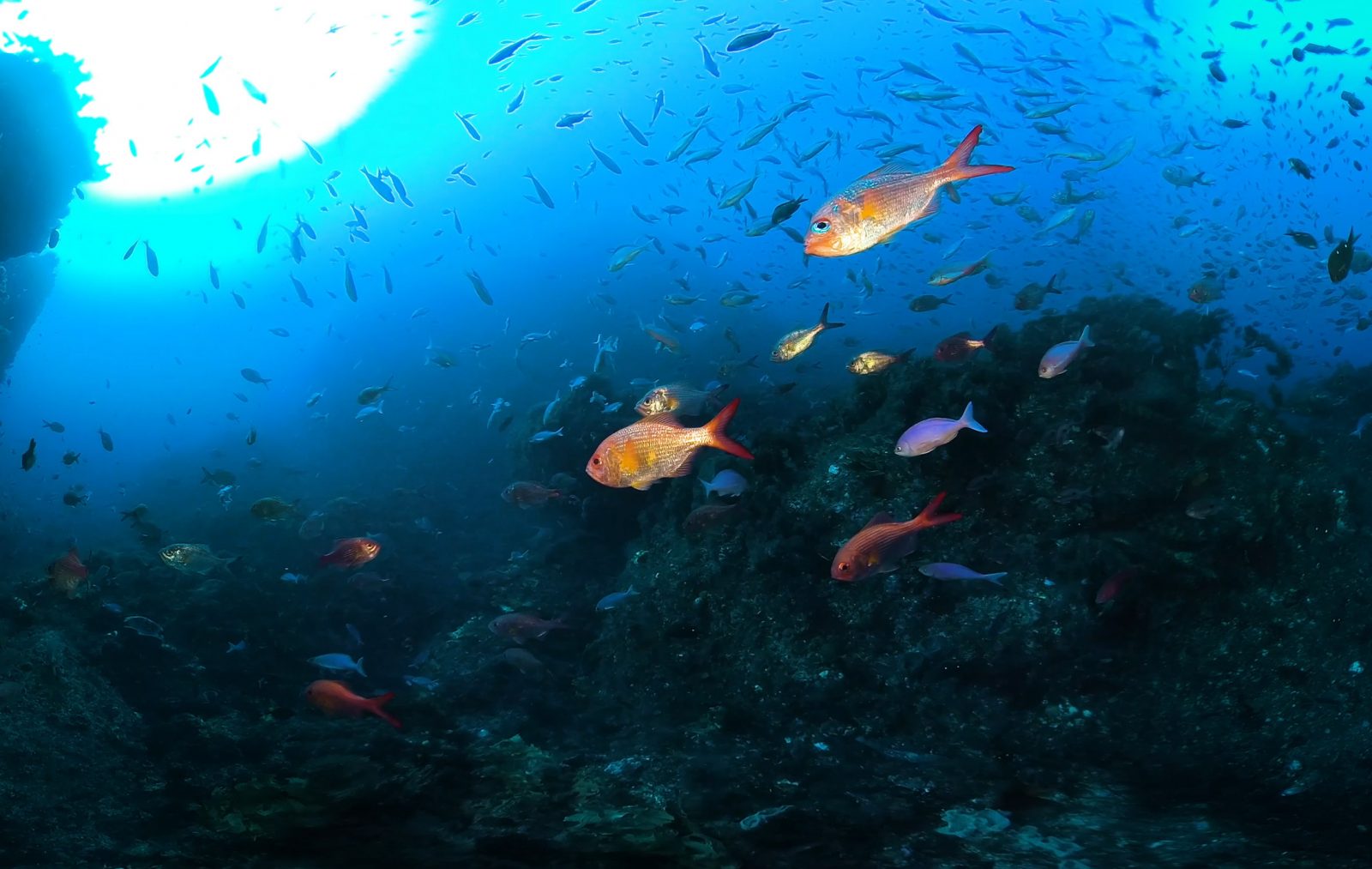 On the north coast of Princes Islands, a huge rocky spire called Arch Pinnacle rises steeply from the seafloor.

Golden snapper and pink maomao linger in the deepest water. You can see demoiselles with two delicate white spots, and butterfly perch—a tawny little fish with what looks like a thumbprint on its flank. 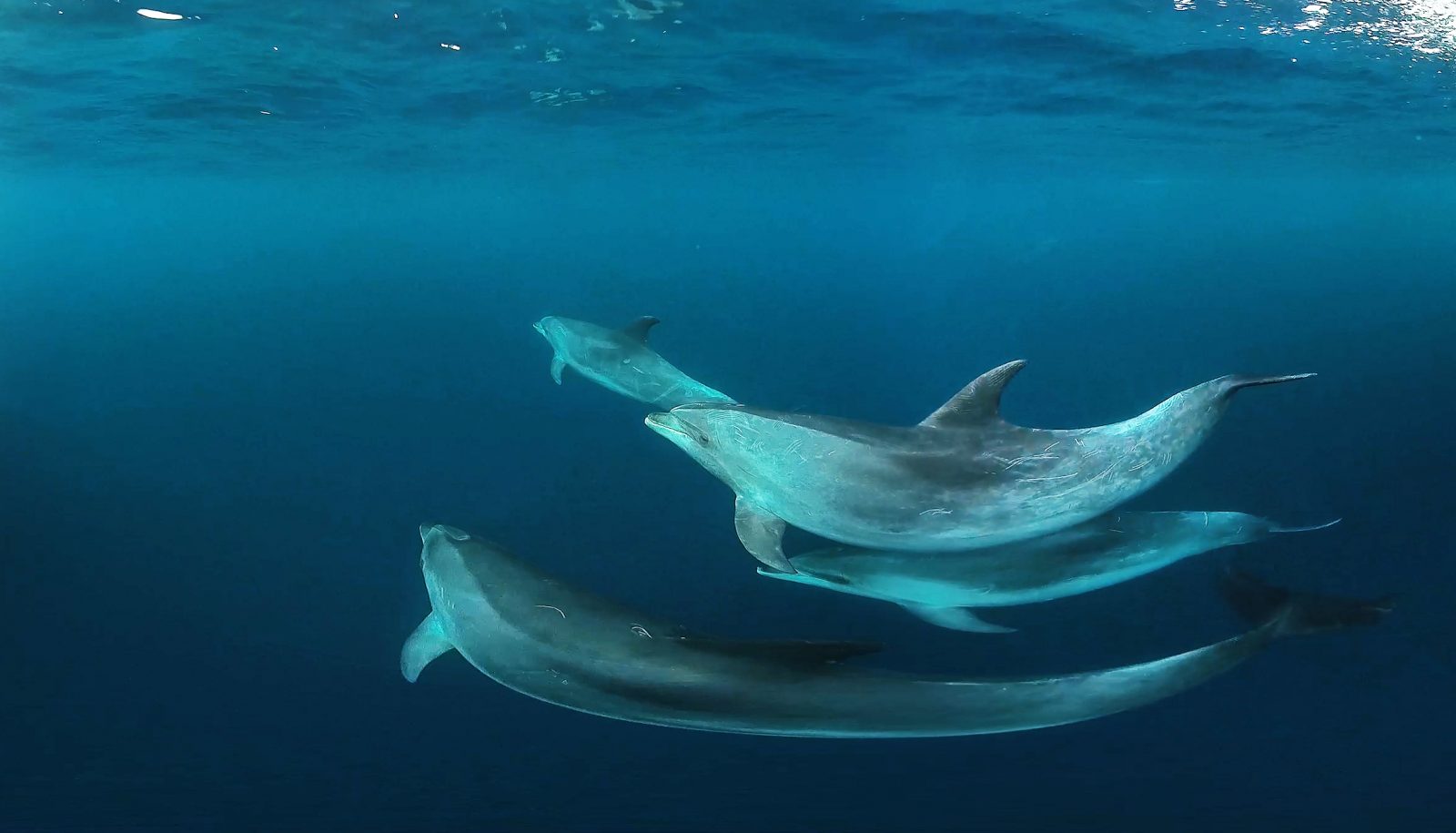 Oceanic bottlenose dolphins shelter and feed in the lee of the Princes Islands. They are larger and more scarred than their cousins along the coasts of mainland New Zealand.

The sea at the Three Kings feels like a living, breathing thing. Strong tides run between the islands, forming whirlpools, standing waves and great mounds of smooth water that erupt from the depths as though it’s boiling. Warm currents cross the Tasman from Australia, sometimes bringing tropical fish, and upwellings deliver cold water from the west coast of the mainland, connecting these islands and protecting them. 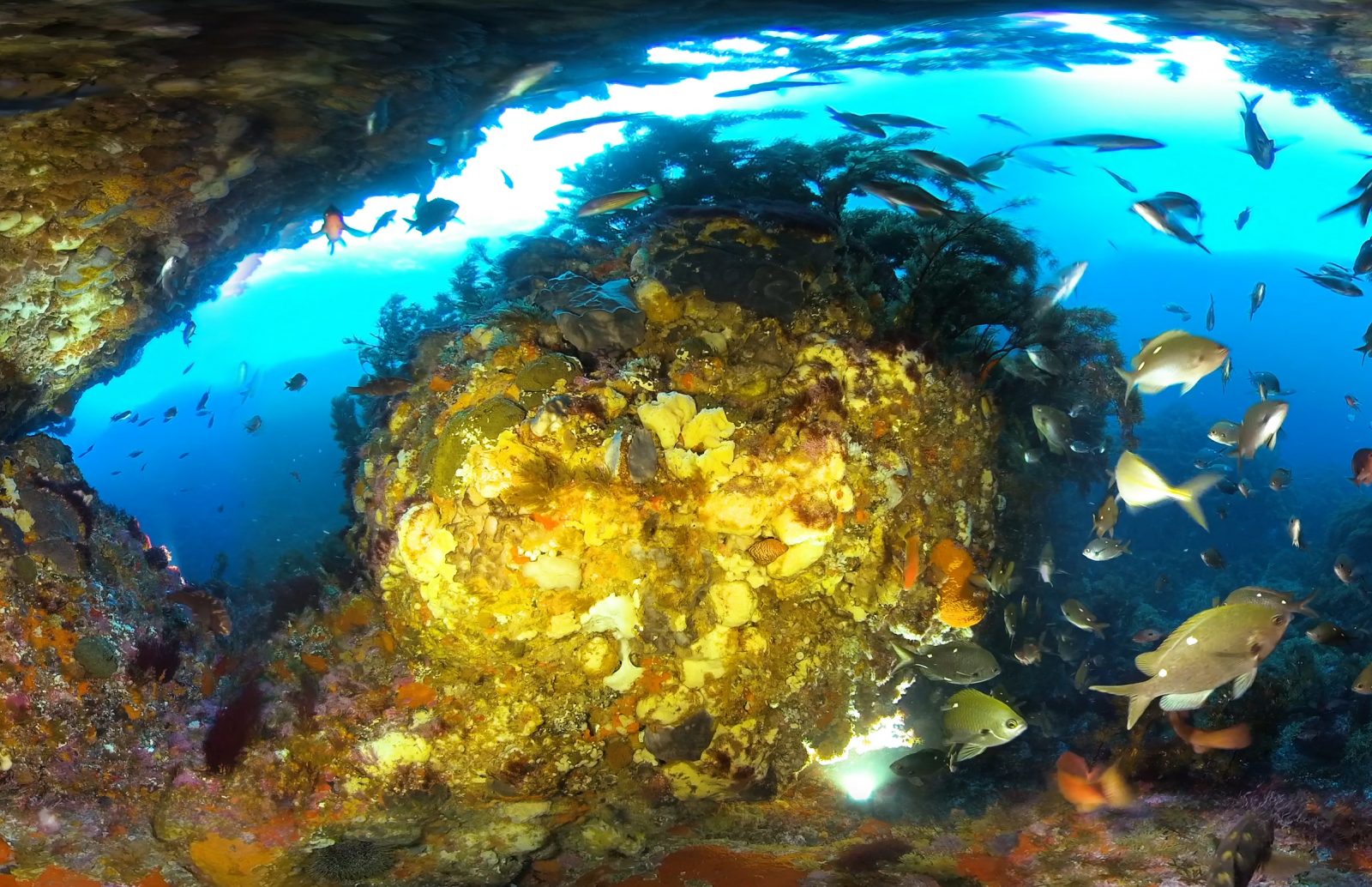 Colourful sponges festoon a cave in Irishman’s Garden which shelters a plethora of reef fish. However the abundance of small fish masks what’s lacking—larger fish, predators like snapper, pelagic species like kingfish. So, where are they? Well, it’s complicated…

There are fewer habitats available in a small island group, so the fish life is naturally less diverse. For instance, there are no seagrass meadows here, which are nurseries for juvenile snapper and kingfish. As a result you’ll only see adults, but then surprisingly few of them, and that is mostly due to the fact that big fish are targeted by fishers.

Careful what you catch

The spotted black grouper is one of New Zealand’s rarest and most impressive fish—they can grow to two metres long! It is illegal to catch the fish anywhere in New Zealand, under any circumstances. Just don’t do it, OK? 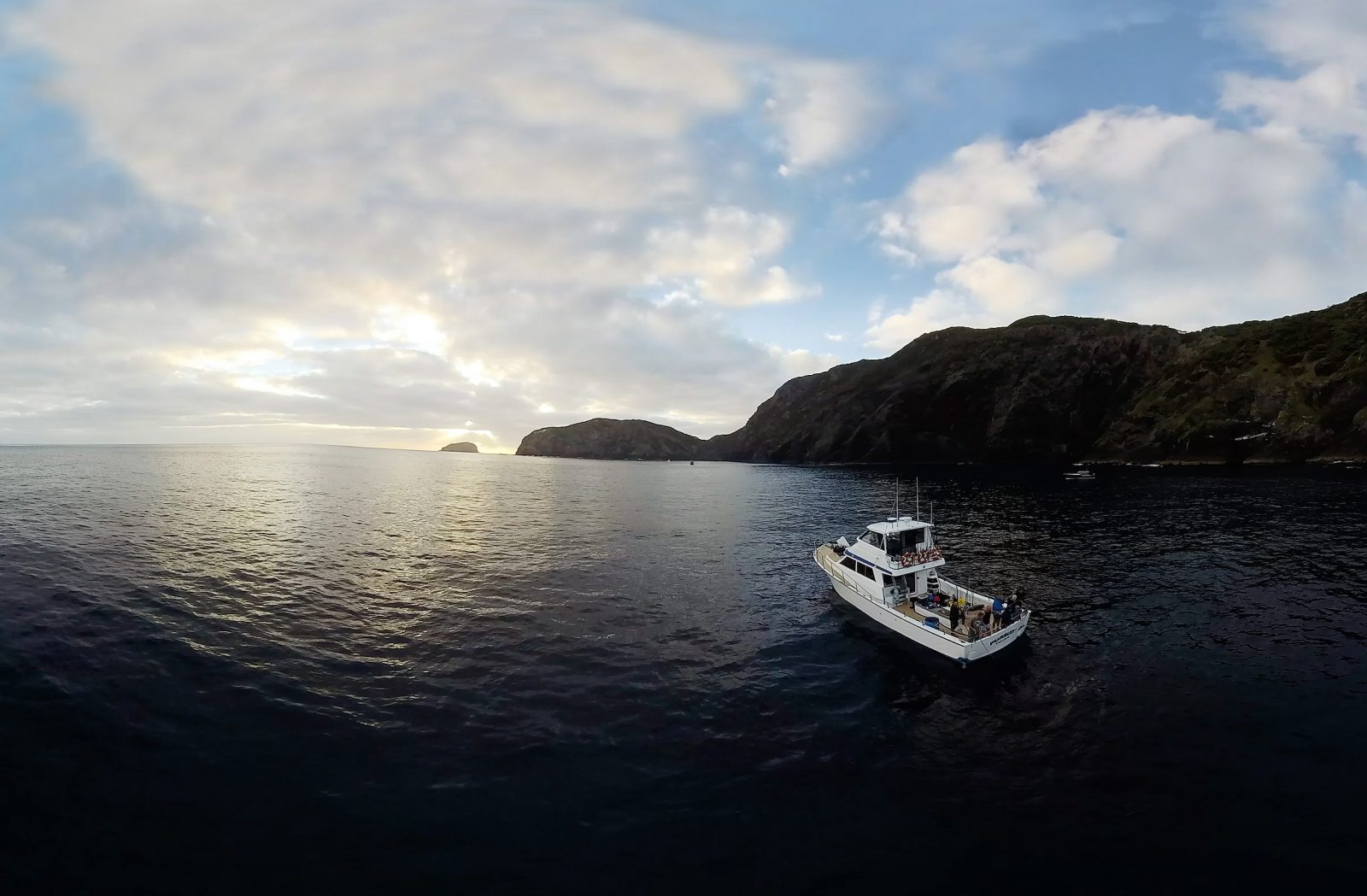 Fishing up a storm

In North-West Bay, between the lollipop-coloured floats marking cray pots, fishing charter boats find anchor. In the calm of evening fishermen drop their lures to pluck out as many small fish as they can to fill their live bait tank.

The bait fish will be used later, on the banks farther out to sea to hook the prize fish of the ‘Kings, hāpuku. Longliners set their hooks on those banks too, pulling up their catch which will be consumed, ultimately, by you and I. 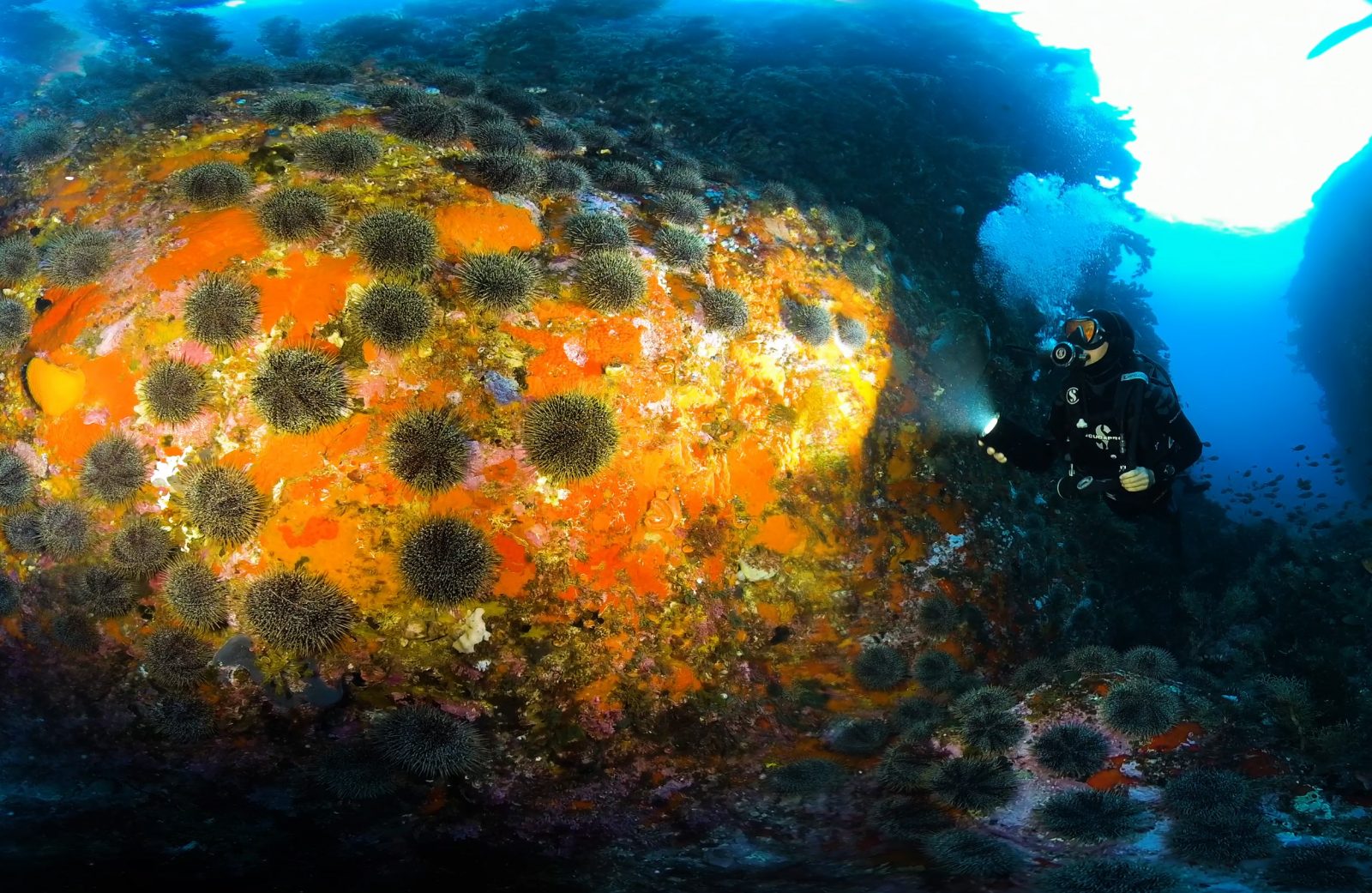 Fishing effort, day after day, century after century, has changed the shape of this place. It’s still heaving with reef fish, but the predators are gone. It’s still resplendent with sargassum weed, but kina that were once devoured by snapper and other reef predators are tearing holes through the fabric of the ecosystem.

It’s obvious where an ecosystem is out of balance—diversity is replaced with monotony and absence. A single species will dominate. It’s started here already, as a result of over-fishing, but likely also because of changes in the patterns of currents that wash through this archipelago.

Being on the edge of the Tasman Front, the Three Kings are uniquely vulnerable to climate change—the water temperature varies dramatically according to currents transporting food and life from the tropics. In small island ecosystems even small changes have amplified consequences. 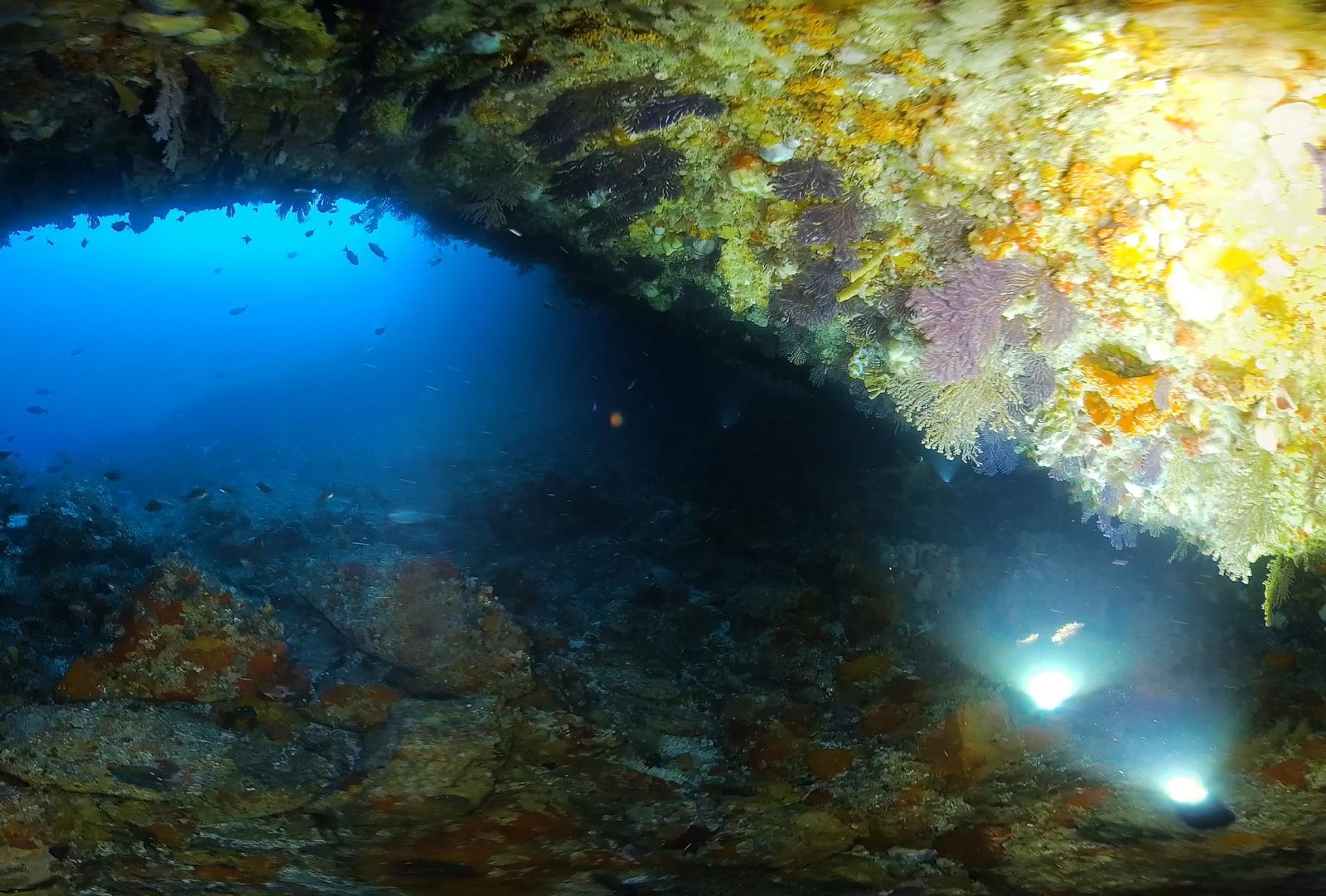 Deep beneath a rock stack on the south coast of the Princes Islands is a dark cavern, invisible from the surface.

Protected within is a china shop of delicate ornaments. Purple and ivory gorgonian fans—usually found much deeper—thrive in the darkness, and deeper into the labyrinth, peach-coloured oculina coral sprout from the roof of the cave. What other wonders might lurk unseen or misunderstood in the depths of Te Manawatawhi? 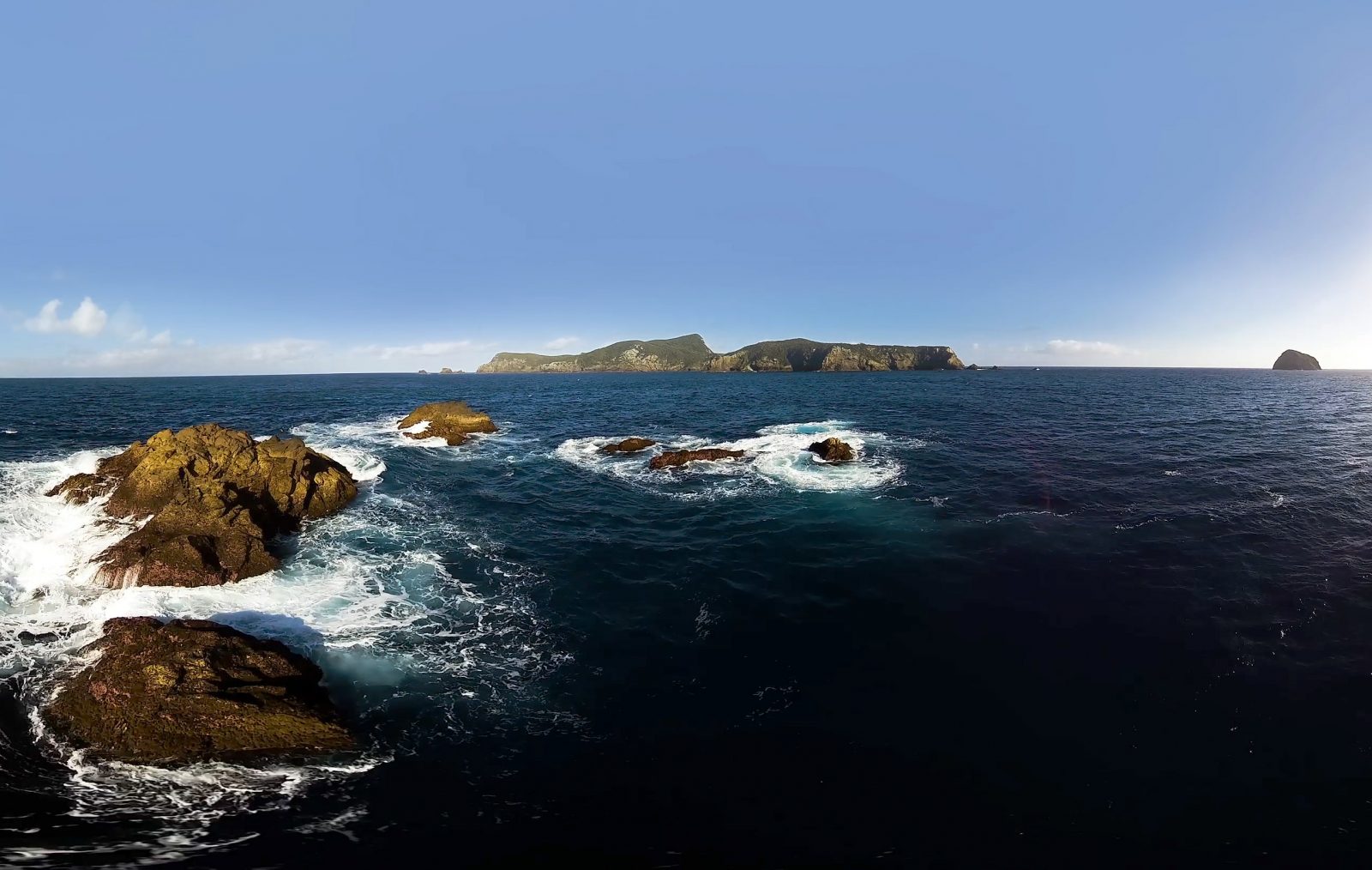 On a still, clear day, you can see the pyramid-shaped form of Te Manawatawhi from Cape Reinga, rising like a tombstone from the horizon.

It must have appeared like that to northern Māori too, because the stories handed down through generations of Ngāti Kurī tell of the great leap of the spirits from the cape, and the long flight to the distant isles—their last resting place, and the spiritual home of the iwi.