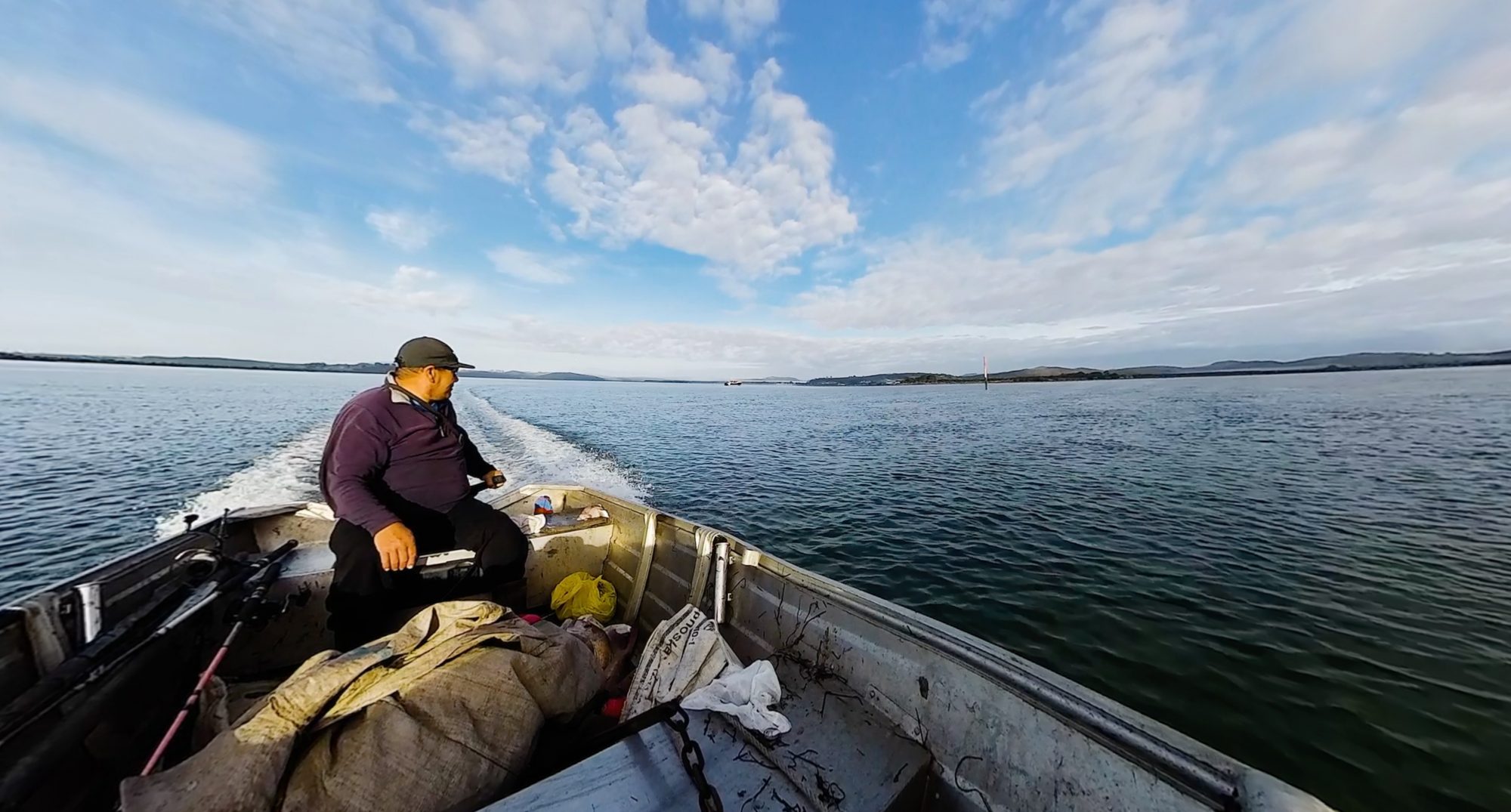 The harbour is a larder for the 500 residents of Te Kao and Te Hapua, like Nick Marsh, who have fished these waters for generations. The customary take is modest, commercial fishing is limited and the Parengarenga Incorporation, which owns a significant portion of surrounding land, no longer allows the public access over their land to fish recreationally in the harbour.

Locals hope that these measures will ensure an abundant fishery and flourishing marine environment into the future. 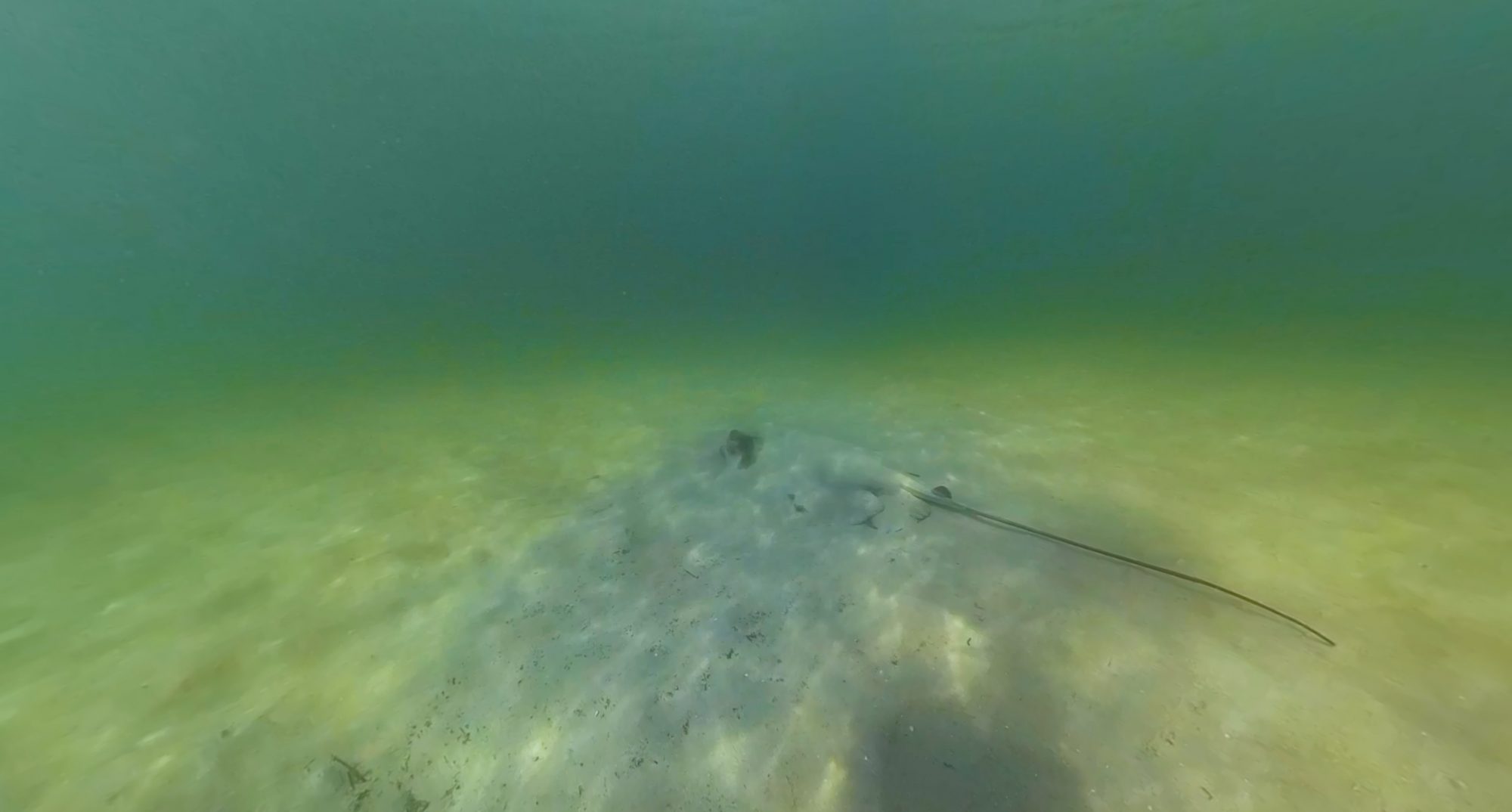 Eagle rays bask in the warm, clear shallows of Parengarenga, one of the best preserved harbour systems in New Zealand.

Almost all of the surrounding land is Māori-owned, in a mix of native vegetation and scrub, some forestry and about half pastoral farming. There are few tributaries and the catchments are relatively small, meaning that water quality is relatively good. This low-intensity farming, with landowners invested in the health of the harbour, presents a model for sustainable development.

What happens on land flows to sea. Rural run-off, nutrient-loading from fertilisers, forestry slash, sediment from development, sewage overflows and urban run-off are among the most destructive threats to the marine environment. We need to clean up our act. 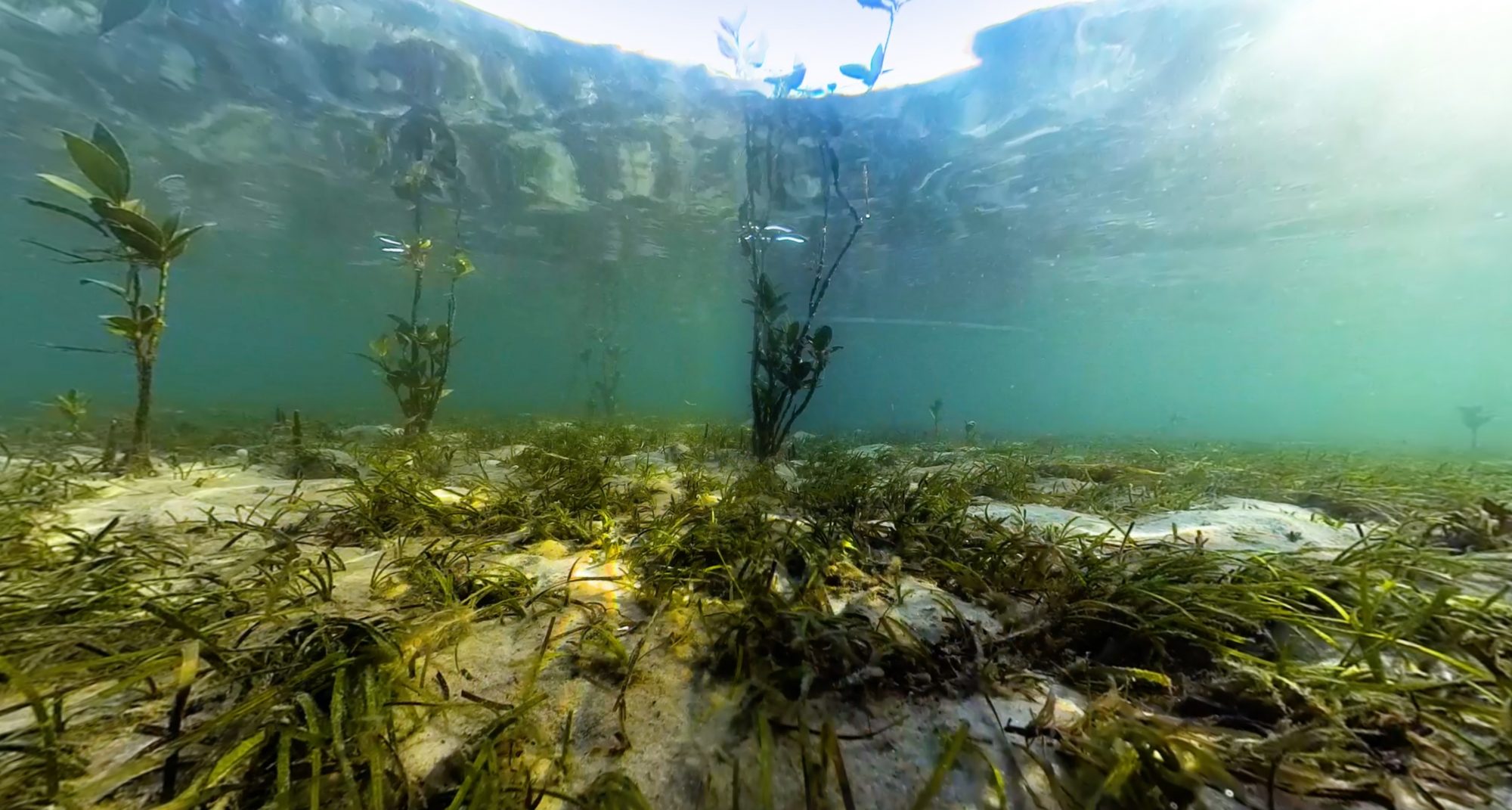 Deep channels lead inland from the harbour entrance. The edges are laced with mangroves and the shallows green with meadows of seagrass. These are nurseries for small fish and rich habitats for shellfish and other crustaceans.

Parengarenga is like a time machine, a vision of what many New Zealand harbours once looked like. Before Auckland’s suburban development flooded the Waitematā and Manukau Harbours with sediment, they too were carpeted in verdant seagrasses. 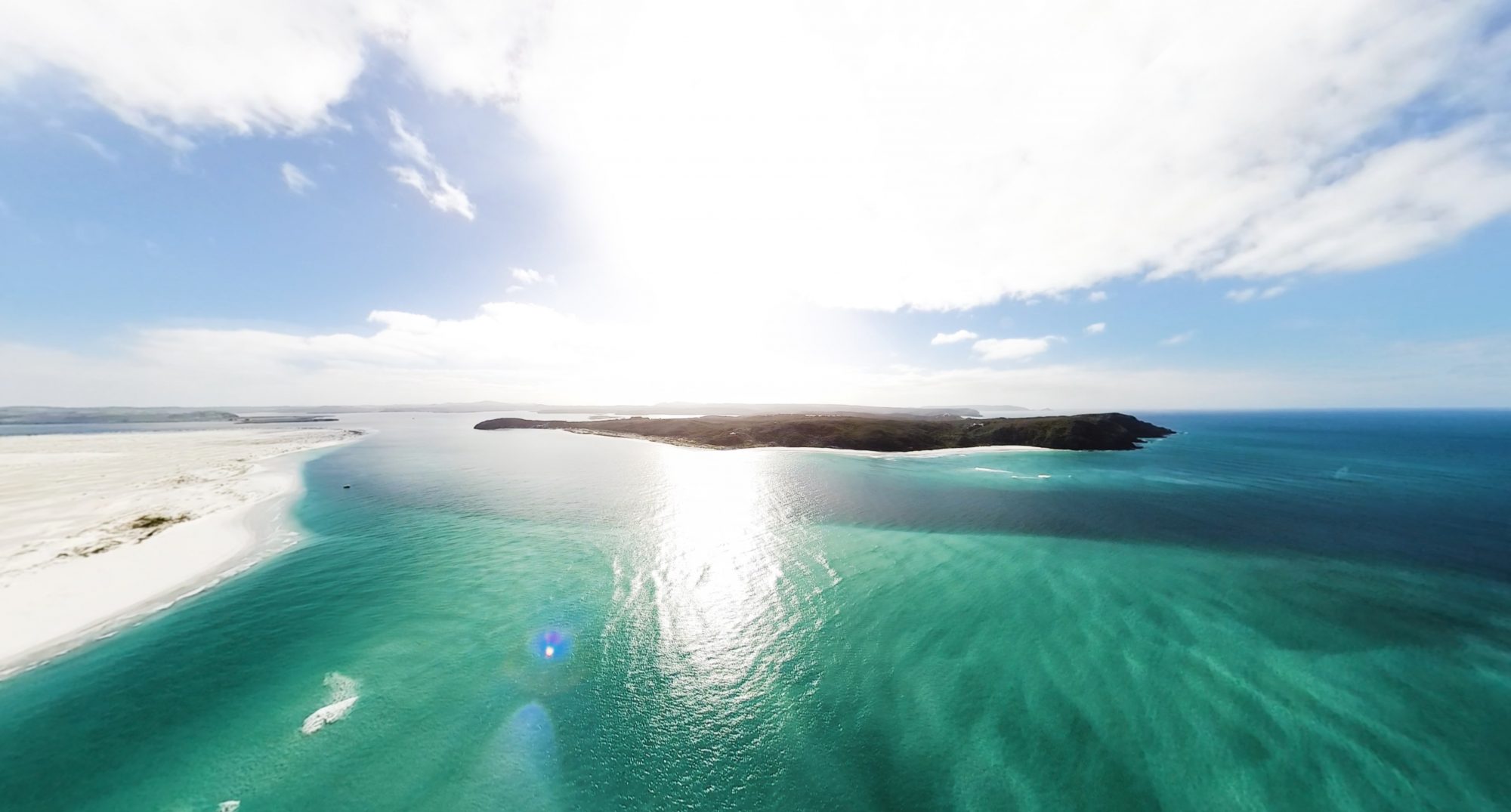 The vast Parengarenga Harbour spills into the sea through a narrow channel of dark water running over a shallow bar. Powerful tides rip across it, drawing the waves into peaks and making treacherous conditions for vessels, some of which lie wrecked and rusting in the shallows—an immortal warning to mariners.

The harbour extends inland some ten kilometres with five sprawling arms, each with shallow fingers lined with mangroves.

The shores of Parengarenga Harbour support a number of rare birds and plants, including the endemic sand daphne. Avoid walking on sand dunes, areas where birds are nesting or anywhere where vegetation maintains a fragile hold. 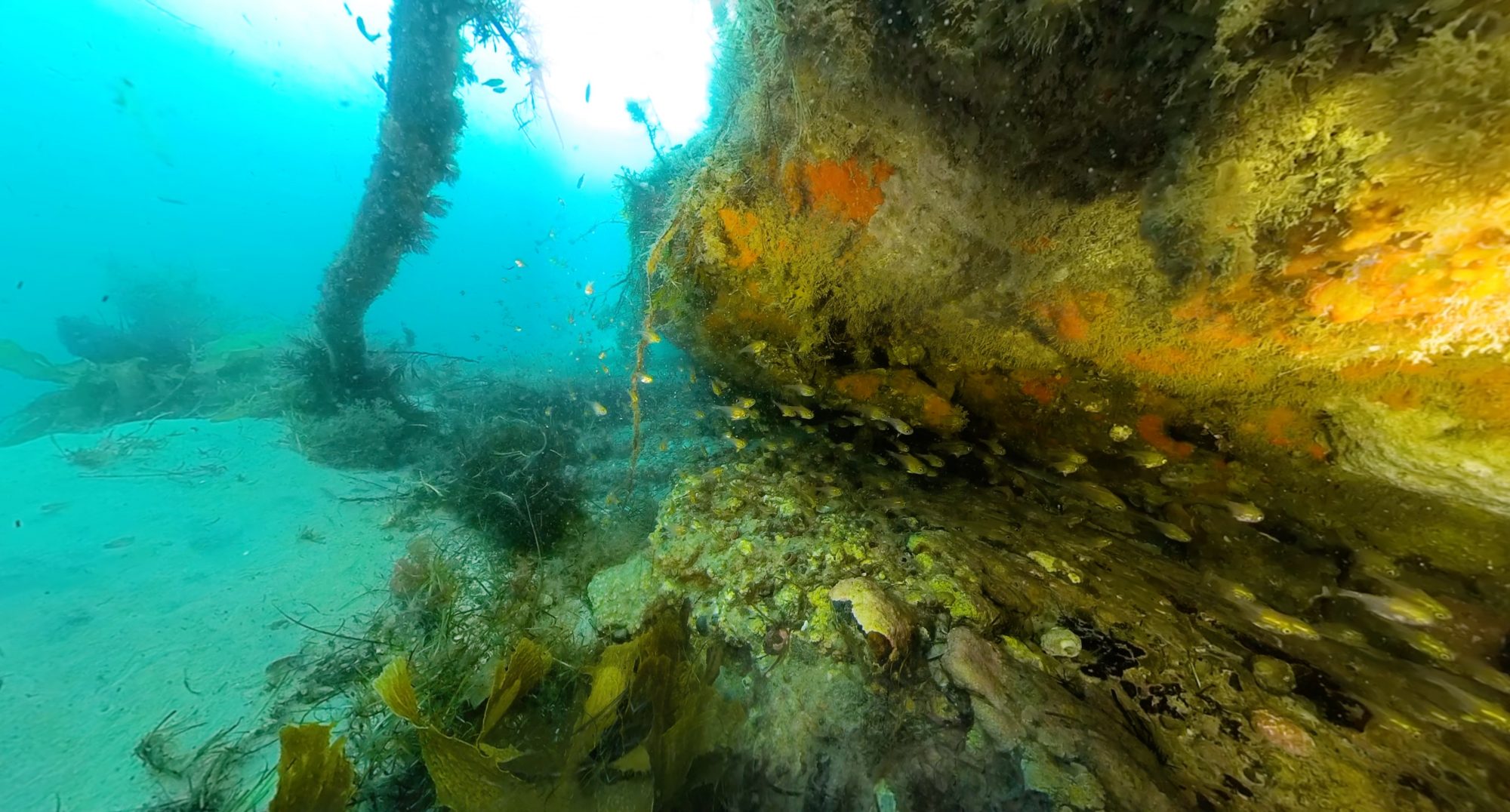 At the harbour entrance, tiny juvenile fish, like these bigeyes, hide in the shelter of a rock. Here they are safe from predators until they are large enough to venture elsewhere in the harbour to feed, or migrate out of the harbour into open water.

Harbours like Parengarenga are important nursery grounds for migratory species—such as kingfish—and have a halo effect, influencing the health of ecosystems all around them.

Kokota Spit and much of the land surrounding Parengarenga Harbour has been closed from access by the Parengaerenga Incorporation to limit fishing pressure and human impact on the harbour. Local bans such as these are important tools for local environmental management of sensitive areas and should be respected. 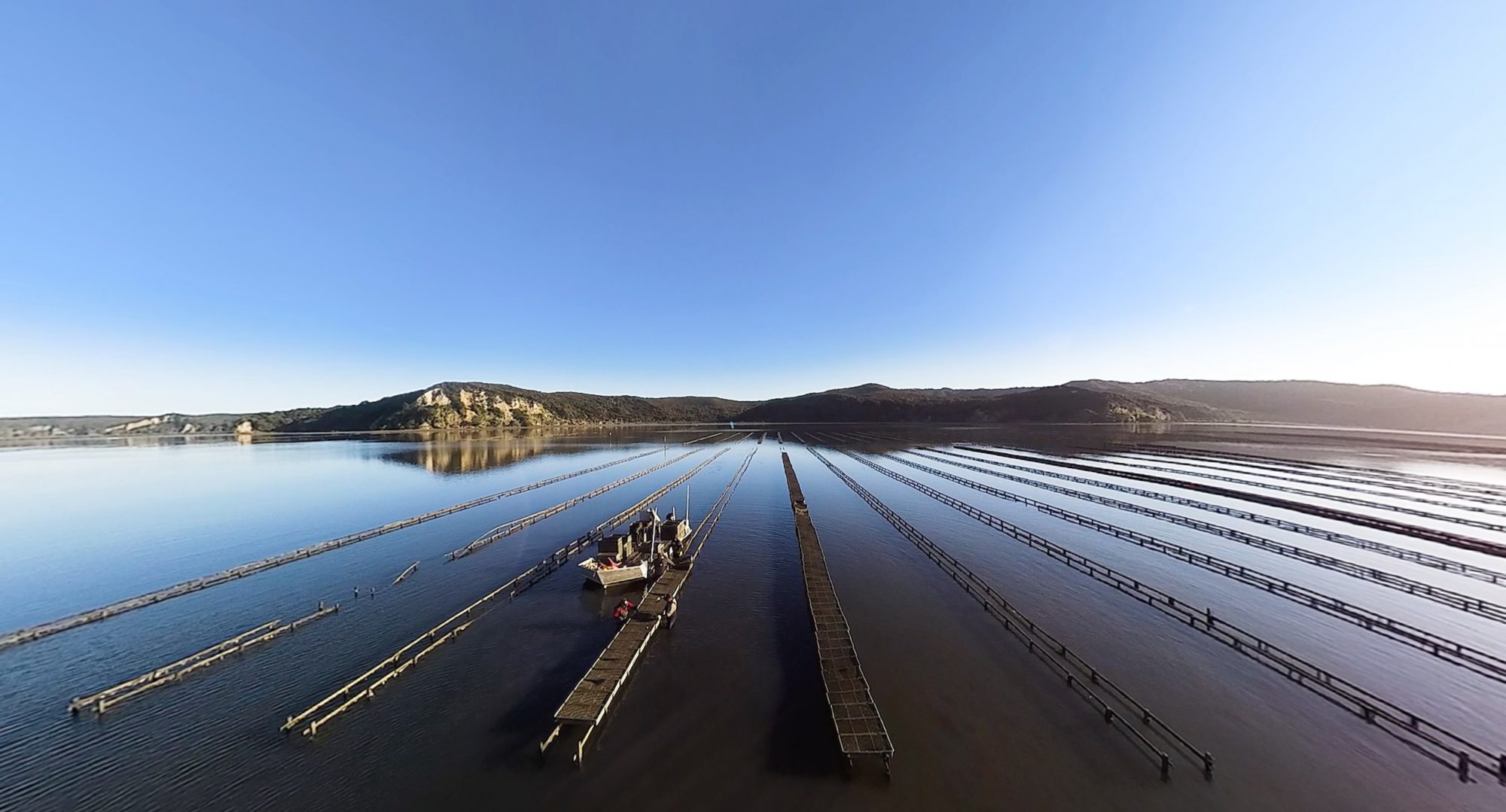 Workers repair an oyster farm damaged by a storm in the shallow upper reaches of Porotu Arm.

While the structures in the marine environment are significant, studies suggest that oyster farms create only modest sediment and have few negative effects on the surrounding environment. They may actually be beneficial roosting sites for wading birds. 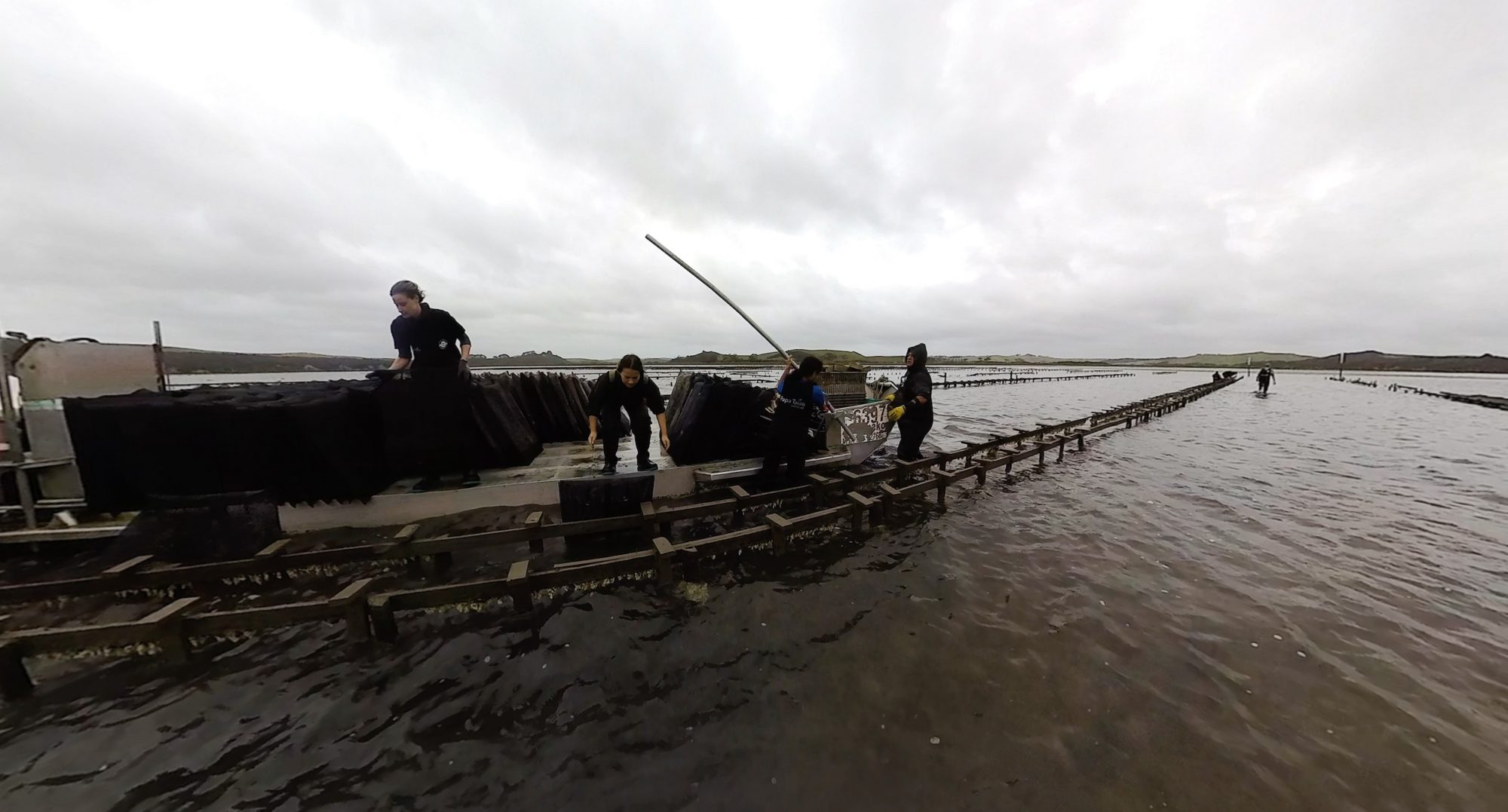 Aquaculture is an important industry for local communities, as employment opportunities are thin on the ground.

Up the Kauanga Channel, an innovative project-learning enterprise called Papa Taiao allows students from Kaitaia College to get first-hand experience on an oyster farm. It’s hoped that the opportunity to see sustainable business in action will allow students to improve outcomes for both local communities and the natural environment. 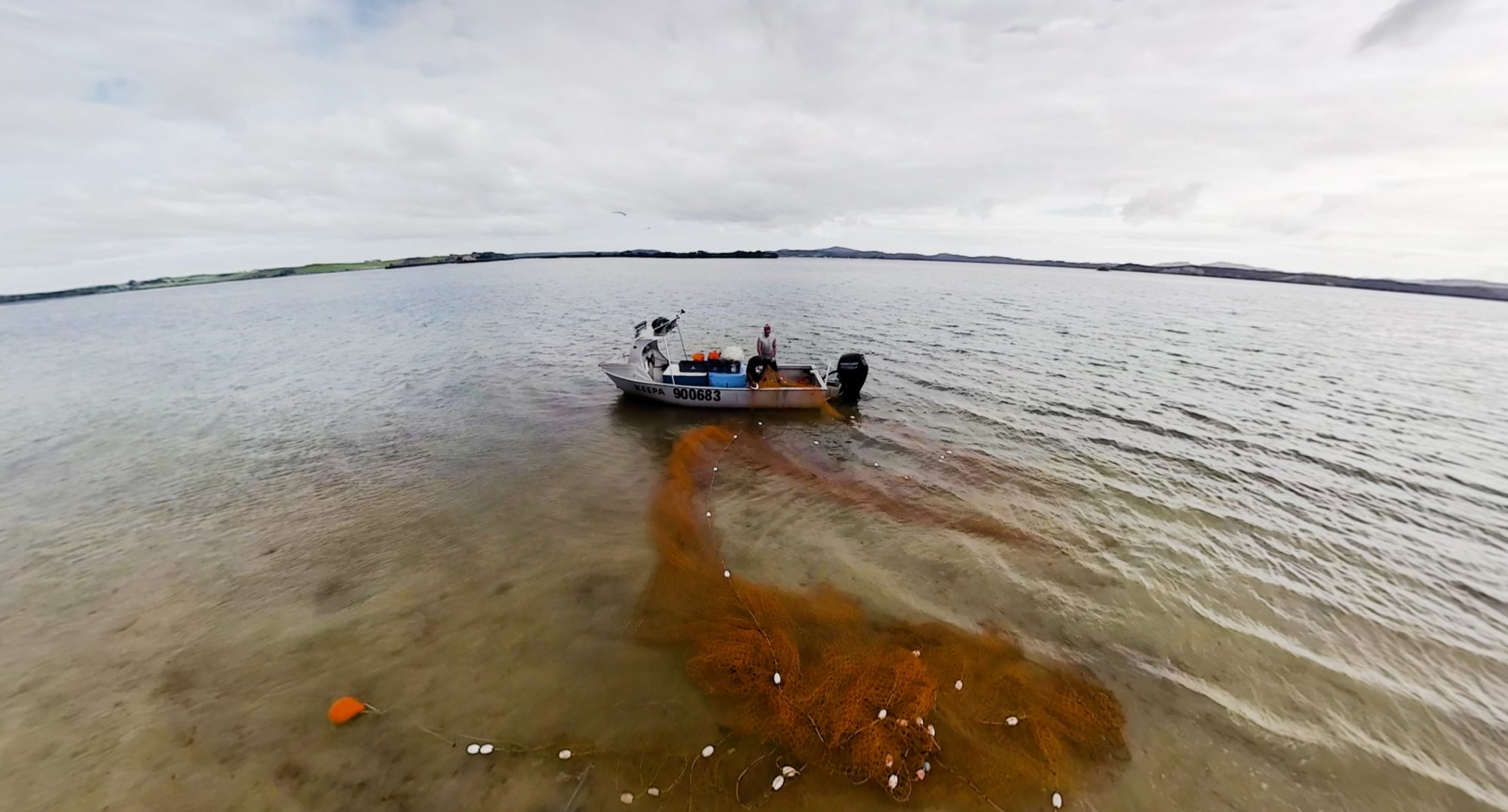 Commercial fishers from Te Kao clear mullet from their net in the shallows of Kokota Spit where they fish their quota.

Because of Parengarenga’s treacherous bar, shallow water and remote location, there are just two commercial vessels working in the harbour, both of them local, with a vested interest in a sustainable take. 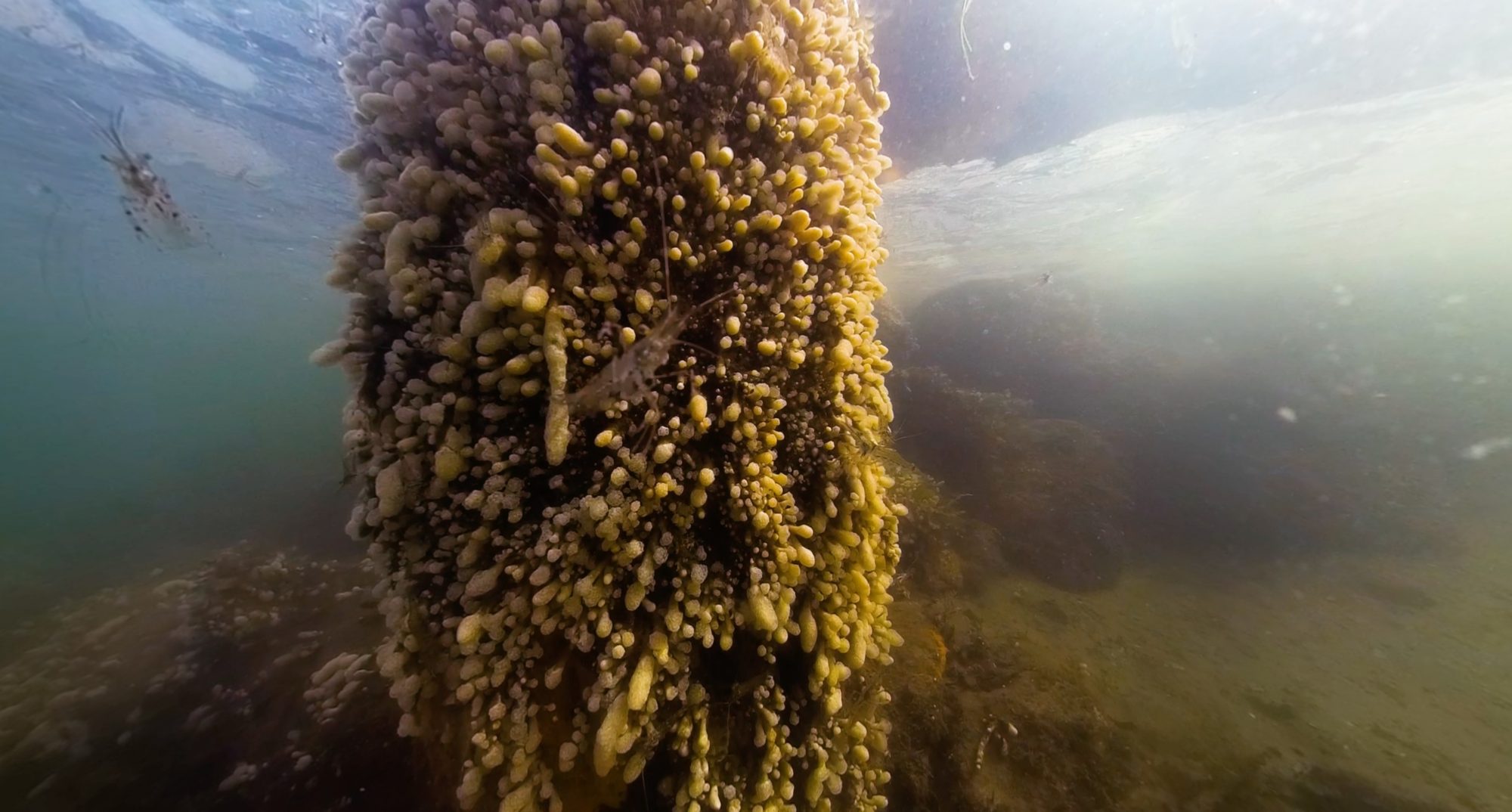 Like strange fruit, ascidians cling to a wharf pile in Te Hapua. A native of Australia, they first appeared in Houhora Harbour in 2005 and were later found on oyster racks here in Parengarenga, likely brought in on the hull of an oyster barge.

The ascidians displace native marine flora, but don’t seem to concern the glass shrimp, which dance around the domes of the camera.

Invasive species can be spread by boats moving around the coasts, particularly between harbours. Check out MPI’s list of invasive marine organisms and keep hulls clean and checked. 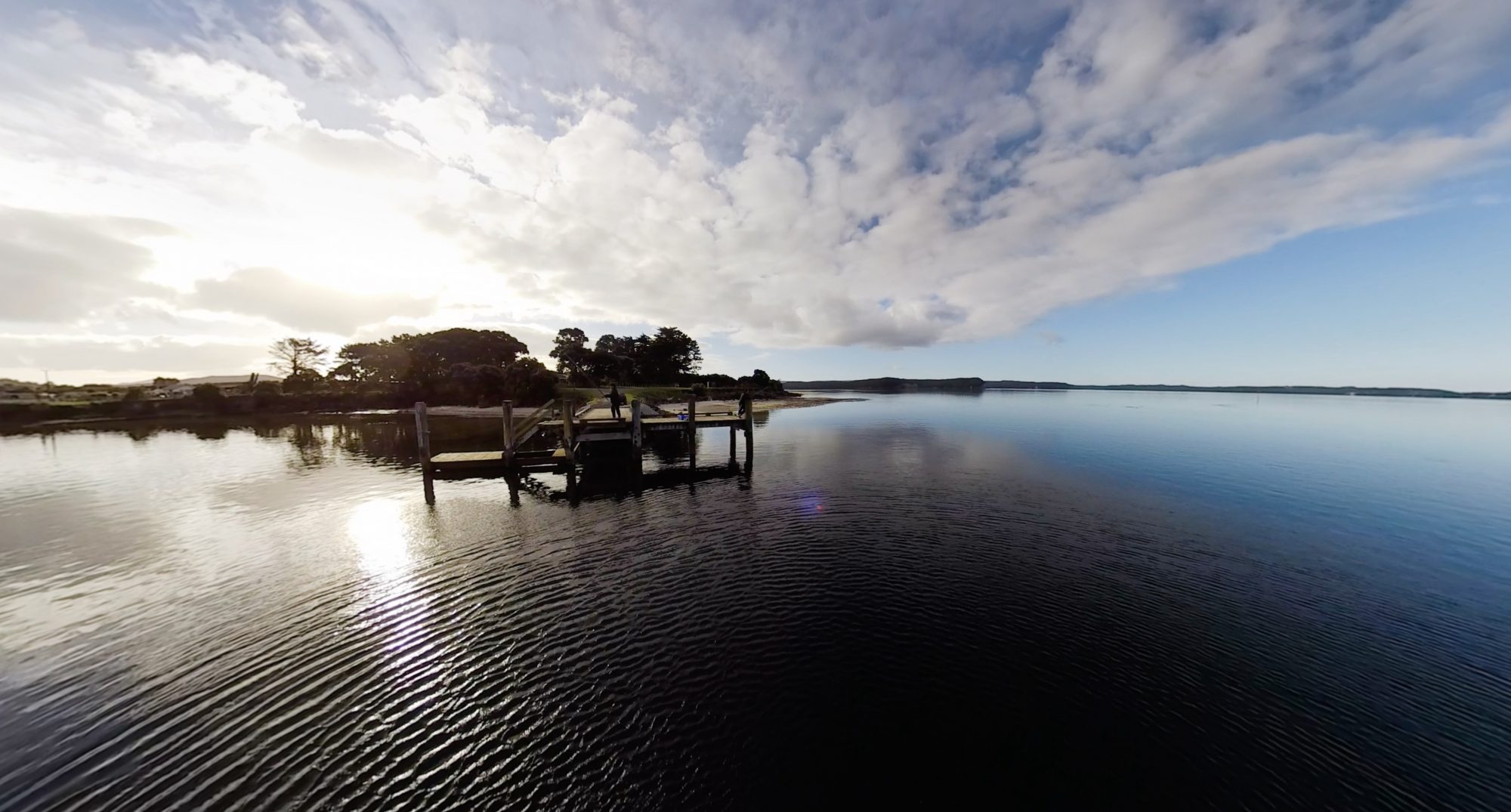 Hooking up a feed

As the sun goes down on Te Hapua, a local casts a line into the still waters of Parenga Channel, a source of sustenance for generations.

Ngāti Kuri did not sign the Treaty of Waitangi, were not included in the first land transactions and saw more than 70% of their land sold out from under them by 1890. They were left with little property and few economic opportunities. The Crown has since apologised and vested some 4015 hectares into their ownership, perhaps giving the iwi the first opportunity in more than a century to control their affairs and the future of their harbour.