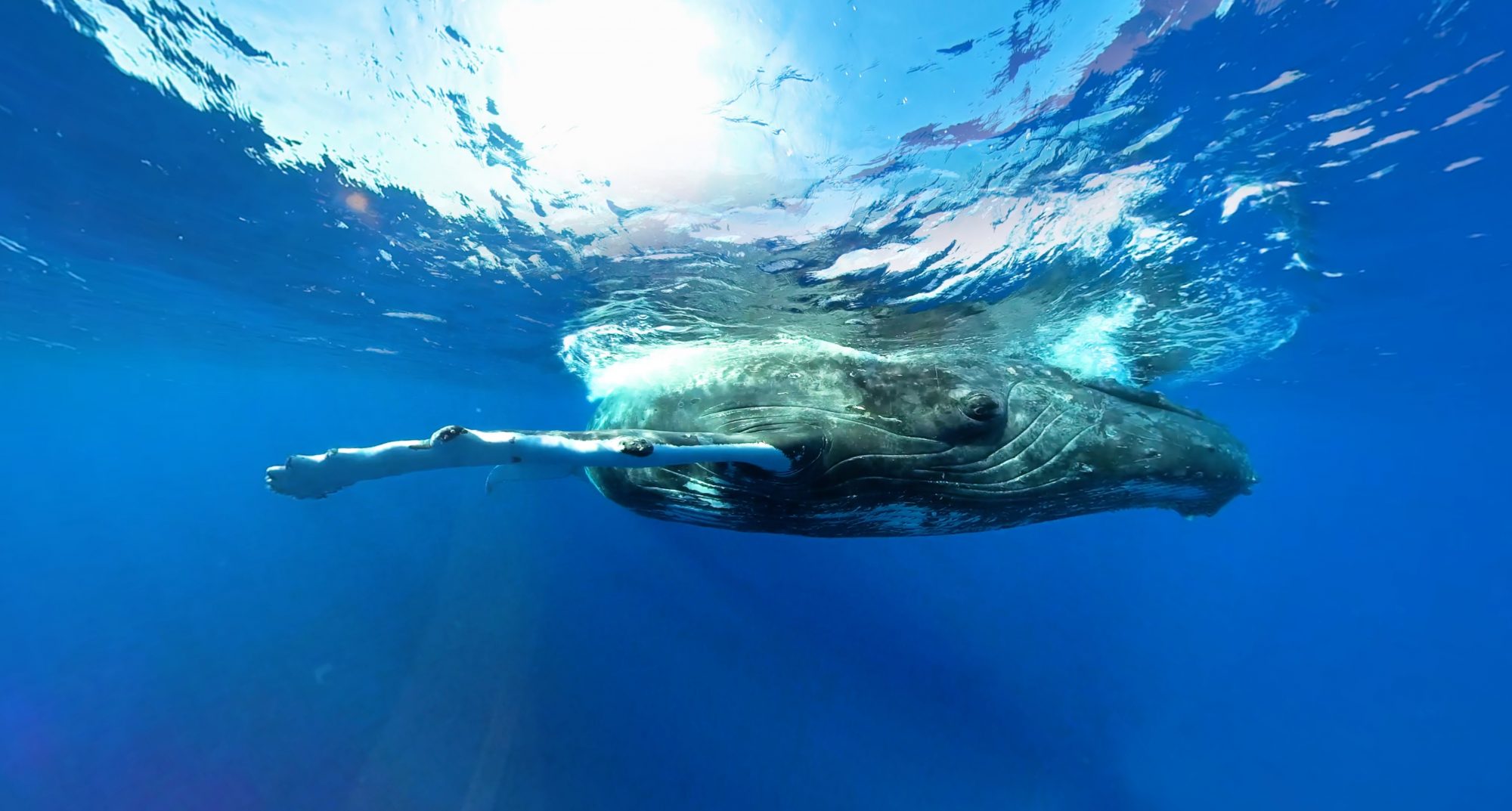 Between August and October each year, humpback whales stop to shelter and sing under the lee of Niue. For some, it may be just a pit-stop on their great migration between feeding grounds in Antarctica and breeding grounds in the South Pacific where they calve and mate.

Niue is carefully exploring whale-watching tourism, including snorkelling with whales, and has strict rules around how tourists, scientists and filmmakers can engage with the whales. Sometimes, however, the whales break the rules themselves, and approach the camera!

Niue has protected 40% of its exclusive economic zone from fishing, mining and other forms of extraction. But that vast area needs management, and enforcement, which is a challenge for one of the world’s smallest states. New Zealand, which has much greater resources, currently protects 0.7% of our EEZ. 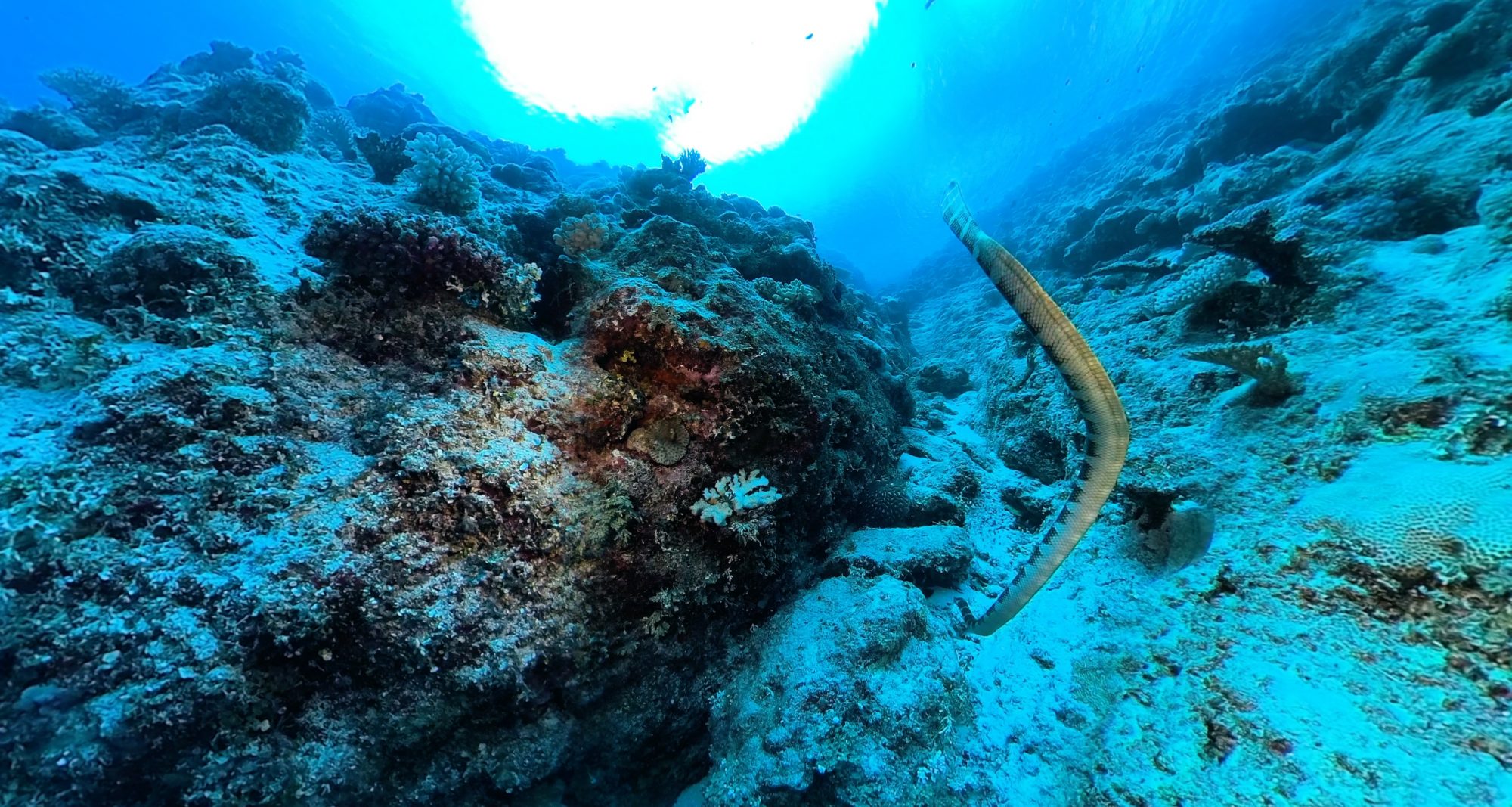 Coral crevices along Niue’s shore harbour dens of writhing sea snakes, no more so than at Snake Gully. Here, snakes swim regularly to the surface to take a breath, then return to their lairs.

Sea snakes are extremely venomous, but their mouths are so small they can only bite a human on the ear lobes, or between the fingers.

How many can you count? 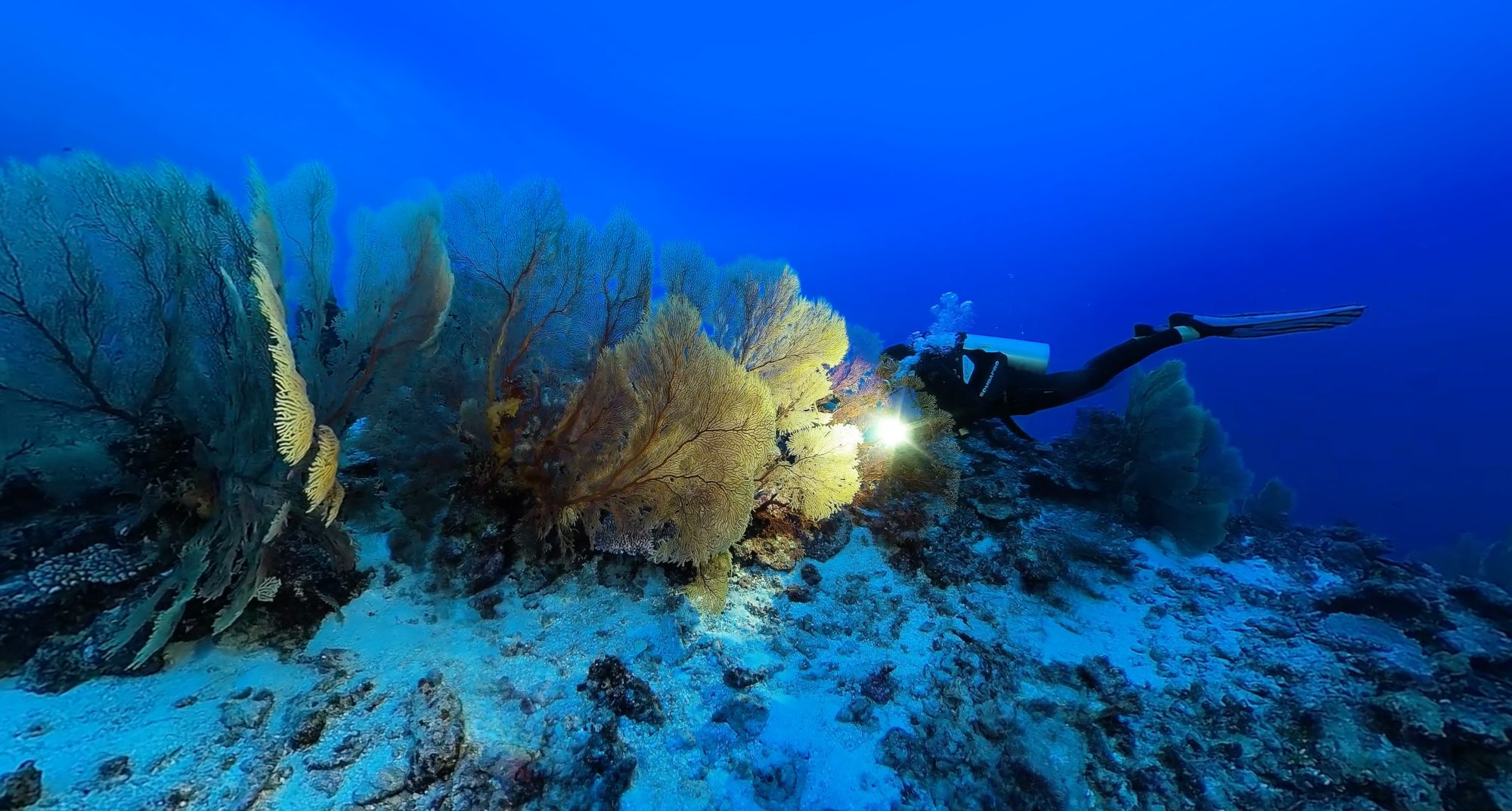 Gorgonian fans the size of golf umbrellas filter the cool water upwelling on the reef edge.

There were much larger fans in shallower water at this site, but they were destroyed in the storm surge of Cyclone Heta which struck in 2004, along with great swathes of the coral reef platform. As the climate changes, scientists fear that these destructive events will occur more frequently.

As the climate warms, the ocean will absorb a quarter of the energy. Warmer sea leads to coral bleaching, destroying entire reefs at once, and eventually to ocean acidification, which slows coral growth and more than halves coral distribution. 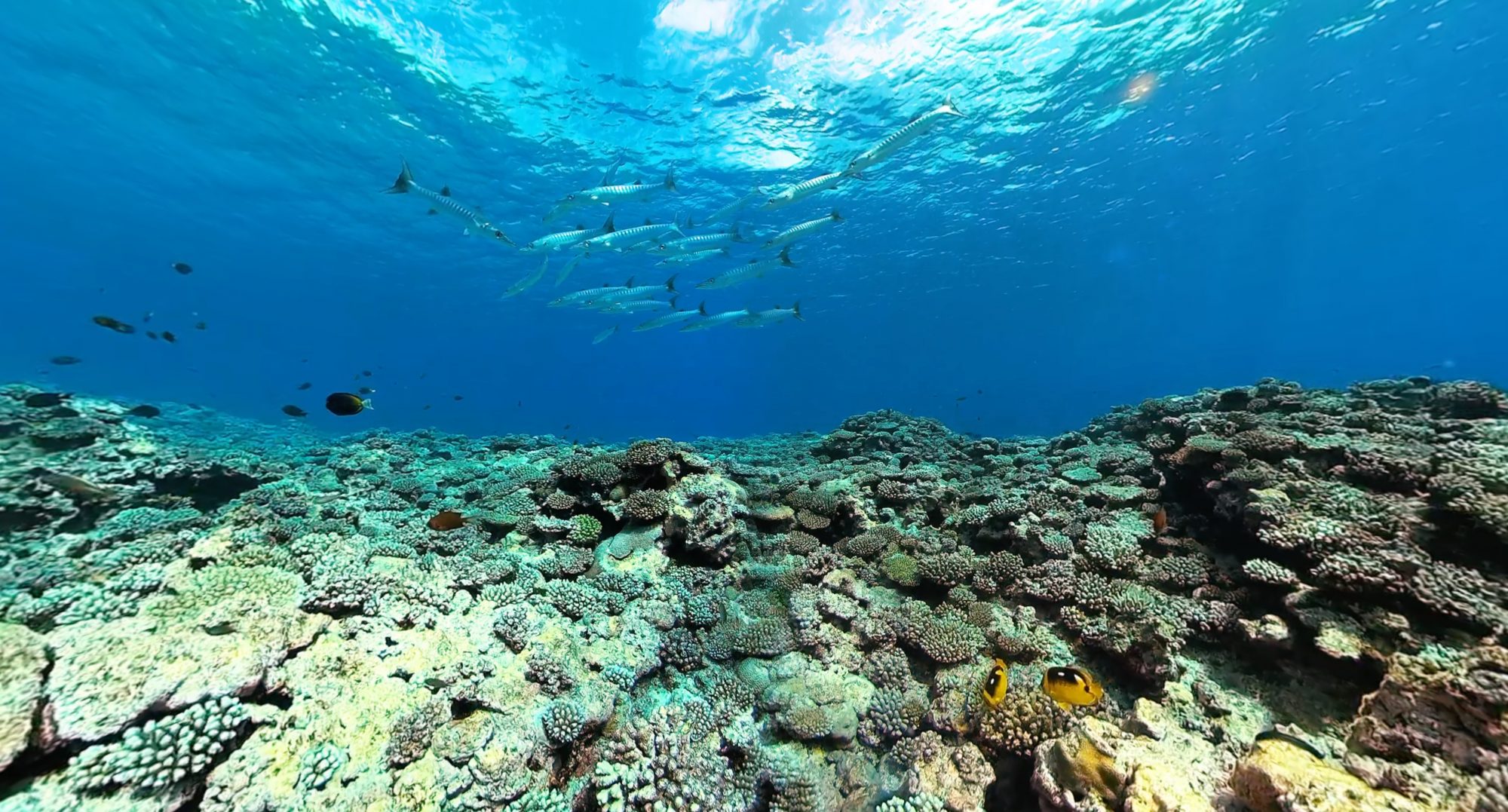 Look around. This is what a healthy and diverse coral reef looks like.

It all fits together like parts of a clock. Every species plays a different role on the reef—some are reef builders, others eat old coral, some fish service other fish, some control algae growth, scavengers clean up after others, large predators keep small fish in check.

Can you see the school of barracuda? 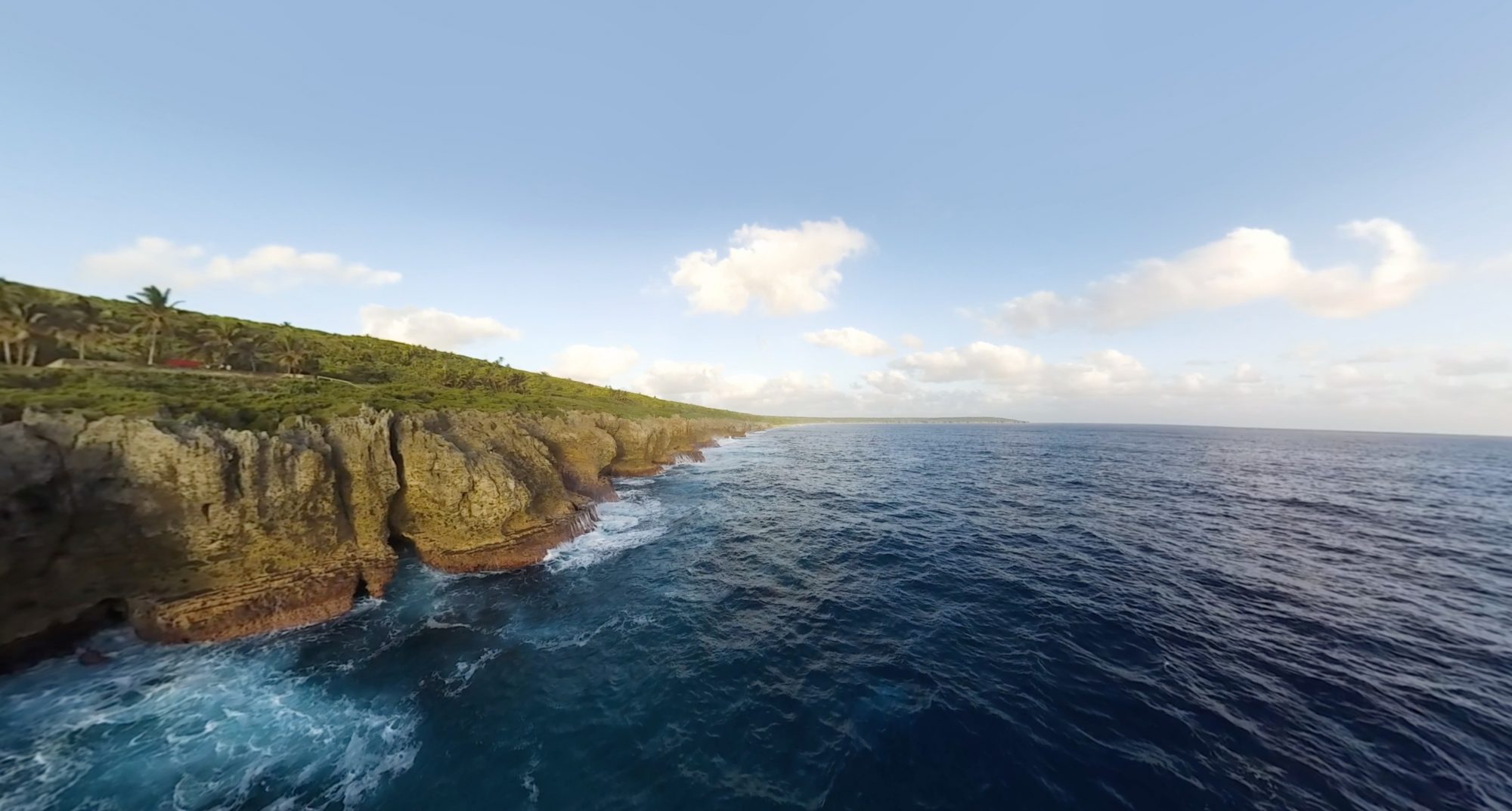 Welcome to The Rock

Niue is one of the world’s smallest states, and one of world’s largest coral islands. There is no fringing reef, no white sandy beaches. Instead the Pacific slams up against the coral cliffs like the buttresses of a huge citadel.

Indeed, Niue offers protection, shelter and habitat for a host of marine life. In 2018 the government ratified legislation to protect a massive 40% of Niue’s exclusive economic zone from fishing and other activities that may harm its near-pristine environment. 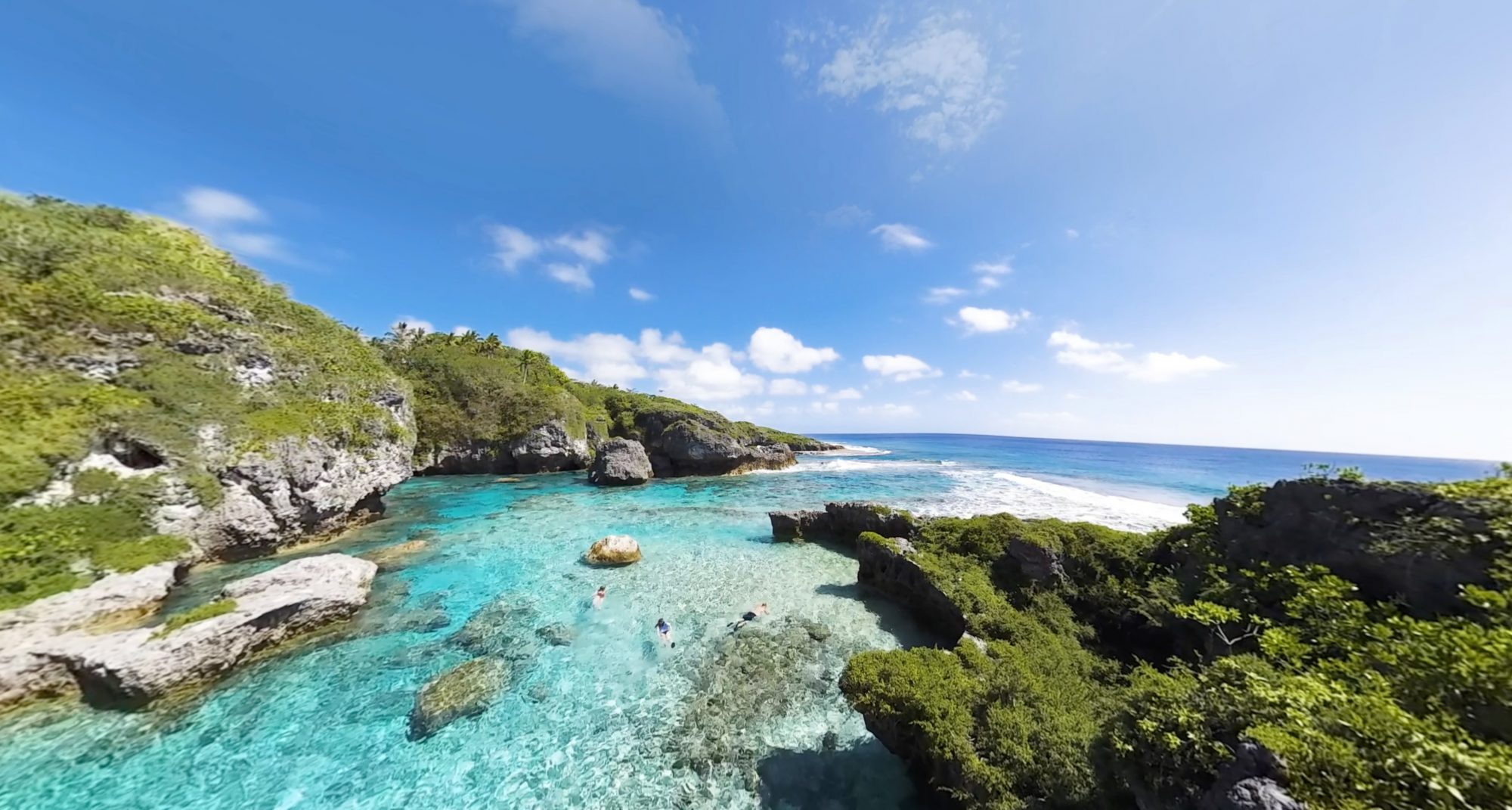 On the west coast, in the lee of the prevailing trade winds, the Pacific has penetrated broken coral cliffs to create a series of pools and channels that delight tourists as much as the locals.

Schools of tiny fish flutter like butterflies under overhangs. As there are no natural watercourses on Niue, the water is staggeringly clear. 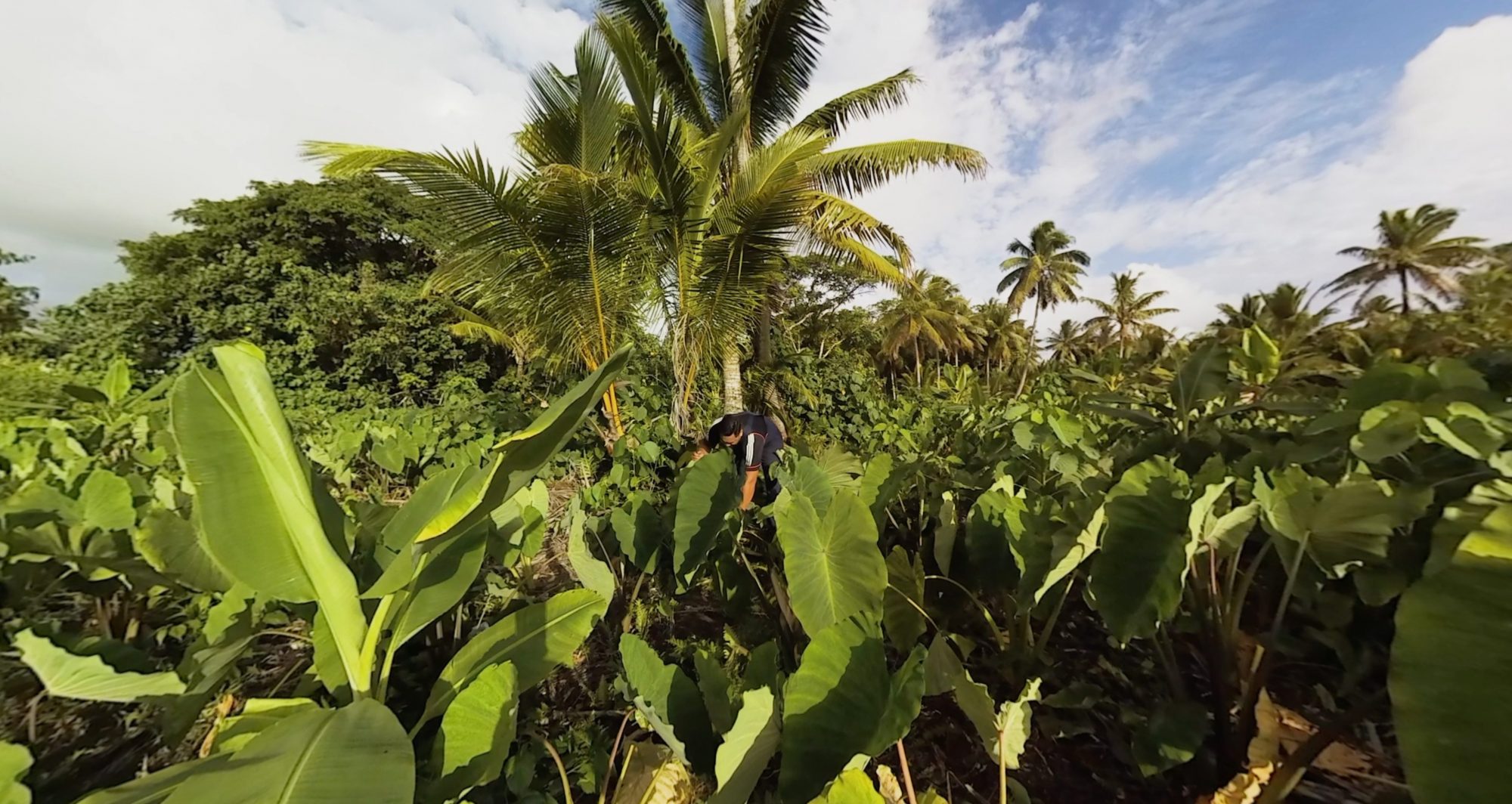 Dan Makaia tends his family taro patch. For many years, taro was the chief export of the island, and Niue’s taro was prized across the Pacific. But the value of the crop crashed at the turn of the century, and as many Niueans emigrated, there were few labourers on the island available to support export-scale agriculture.

Instead, tourism has replaced taro as the main industry. 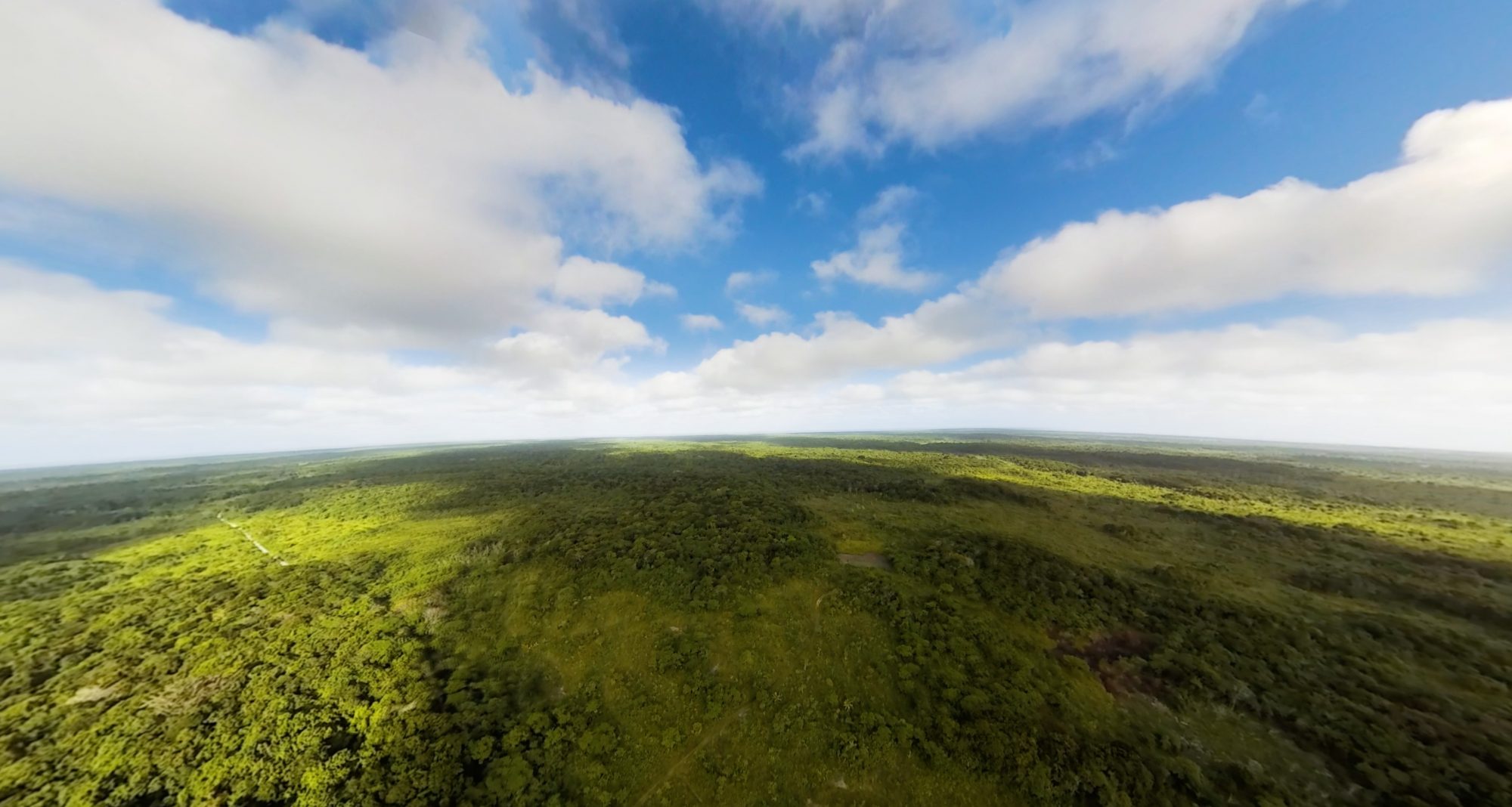 Fly over the forest

The Huvalu Forest Conservation Area stretches across a verdant swathe of the island’s south-east. Much of it is primary growth, but it is suffering from a multitude of threats.

Hunting has driven the flying fox nearly to extinction, the unga—or coconut crab—is not as abundant as it once was, rats have reduced seabird populations and recent powerful cyclones have taken their toll also. 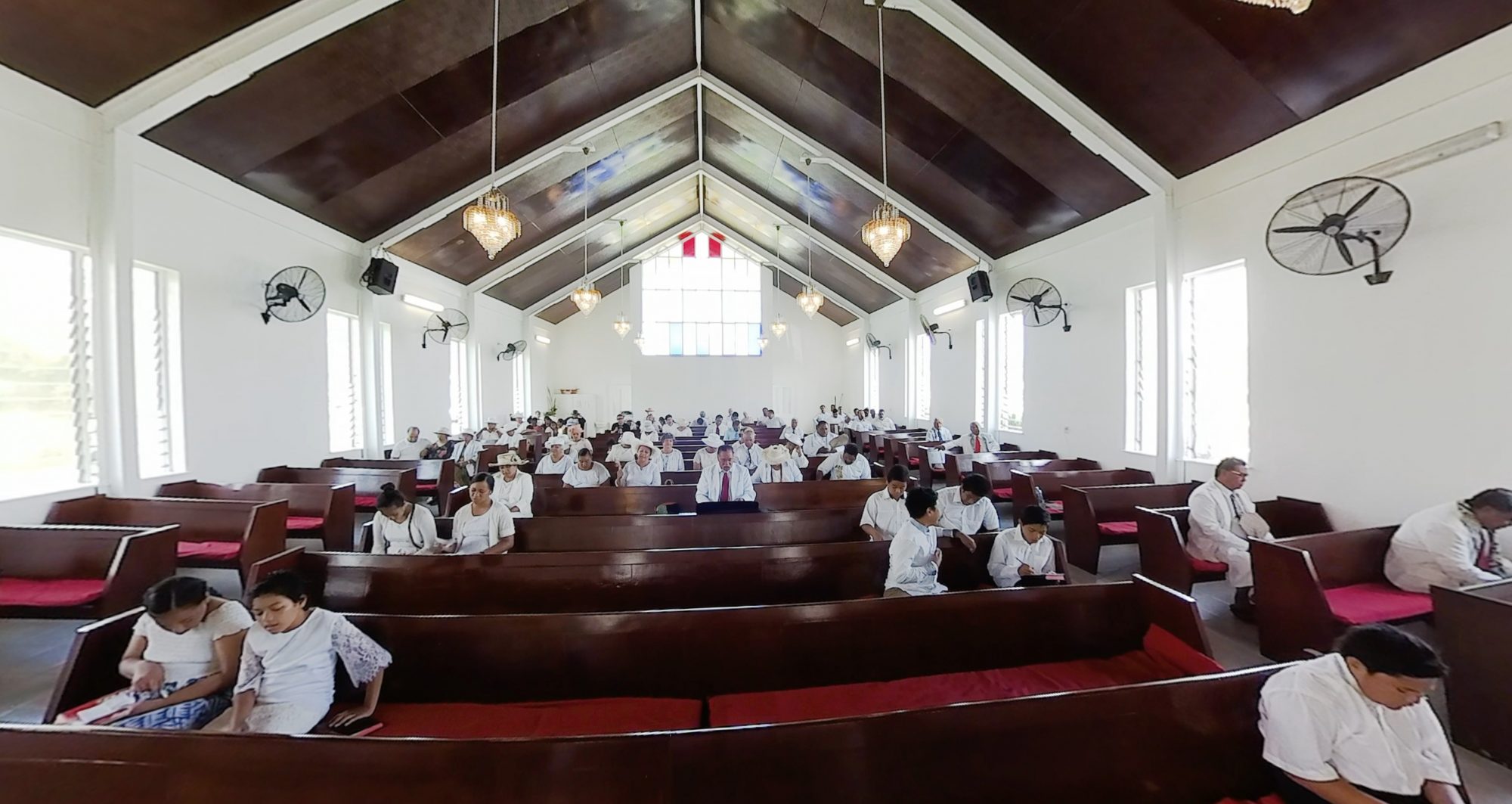 Hakupu locals gather on the first Sunday of the month—White Sunday. The church is an important focal point for the close-knit communities on the island and an influential public voice.

Niue’s population declined steadily from a peak of 5100 people in 1970 to 1600 in 2005. It has remained more or less stable since, but the diaspora has affected the communities and the small nation itself. 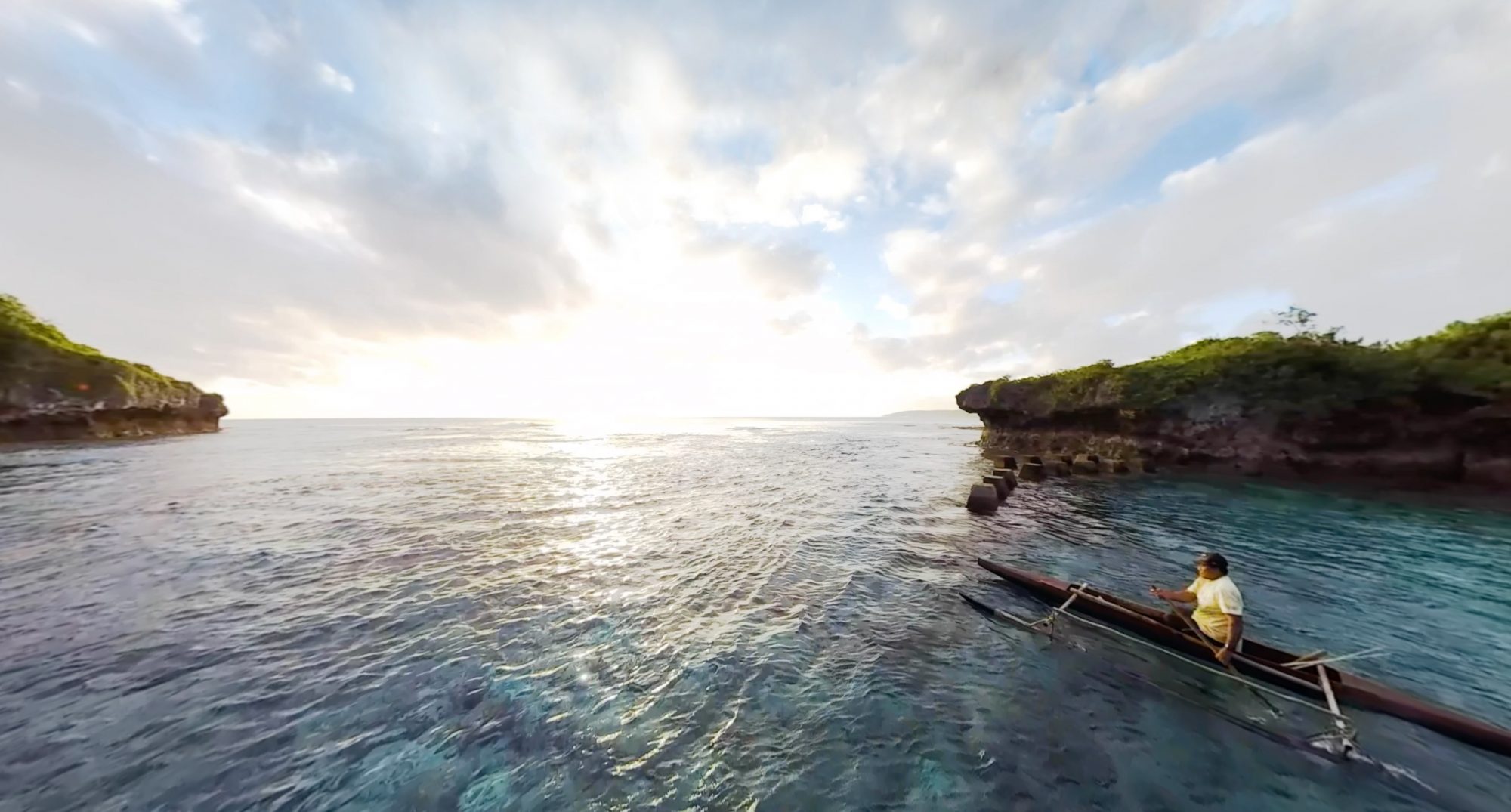 In Avatele, Hine Makaia and Bretrick Vakanofiti ply their vaka out through the passage in the reef to fish.

While some Niue fishermen ship out in modern aluminium vessels, the pair put food on the table and keep a tradition alive at the same time. Traditional fishing methods can more accurately target desired species than modern methods, and the overall catch is significantly less. 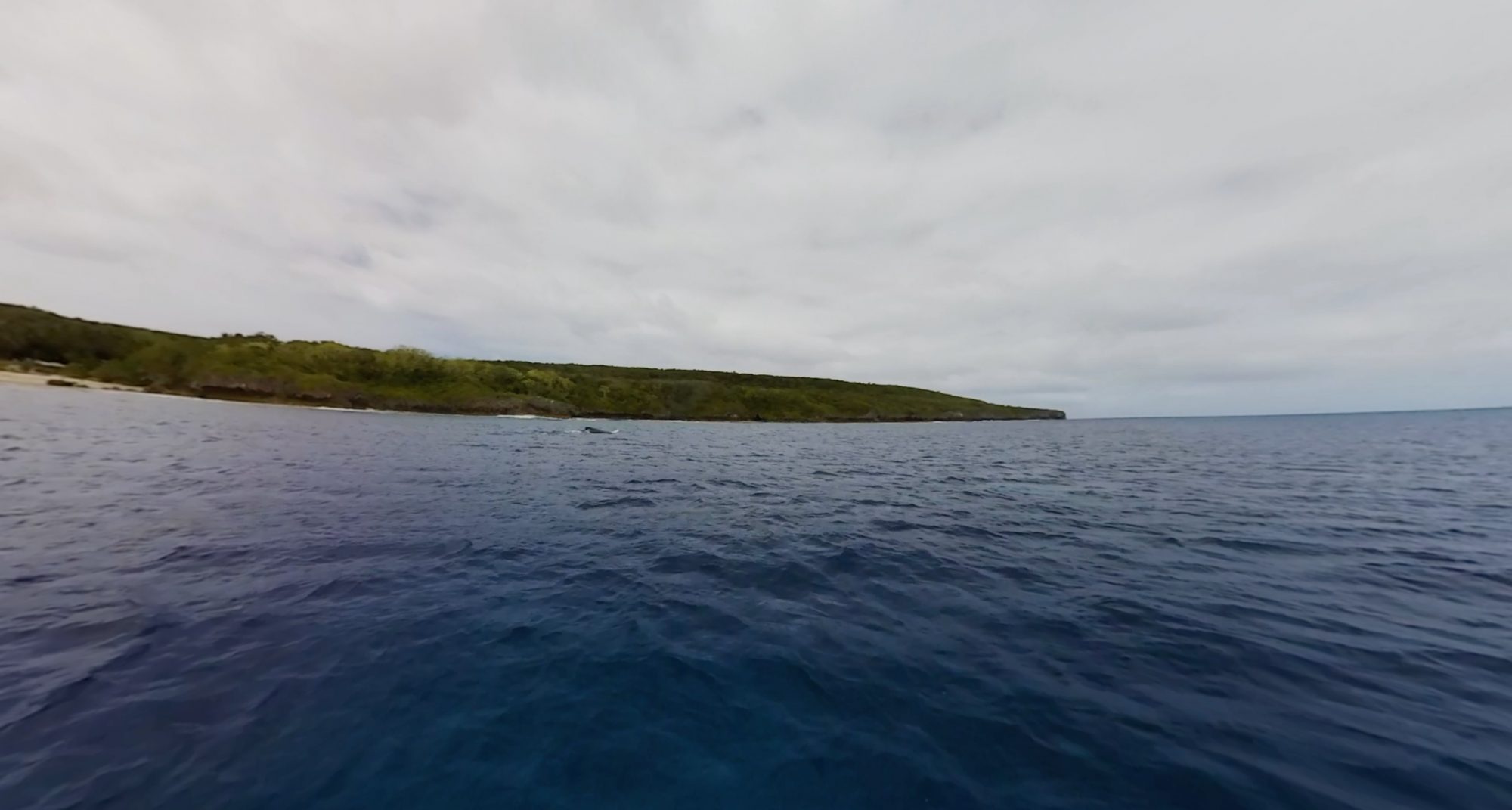 Researchers Jake Levenson, Olive Andrews and Rosie Dodd attempt to attach a LIMPET satellite tracking tag to a whale. This time, they had to pull out when it became obvious that continuing the pursuit would disturb the whale.

There is still much to understand about the life cycles and habits of humpback whales. How do they behave in Niue’s waters? How do they interact with other humpback populations? And where else do they travel? If the humpbacks are to be protected, they need to be afforded protection throughout their range, not just in Niue.

Good decisions are based on good information. Support high-quality scientific research and get clued up yourself—read deeply, think hard, and listen carefully to the experts. 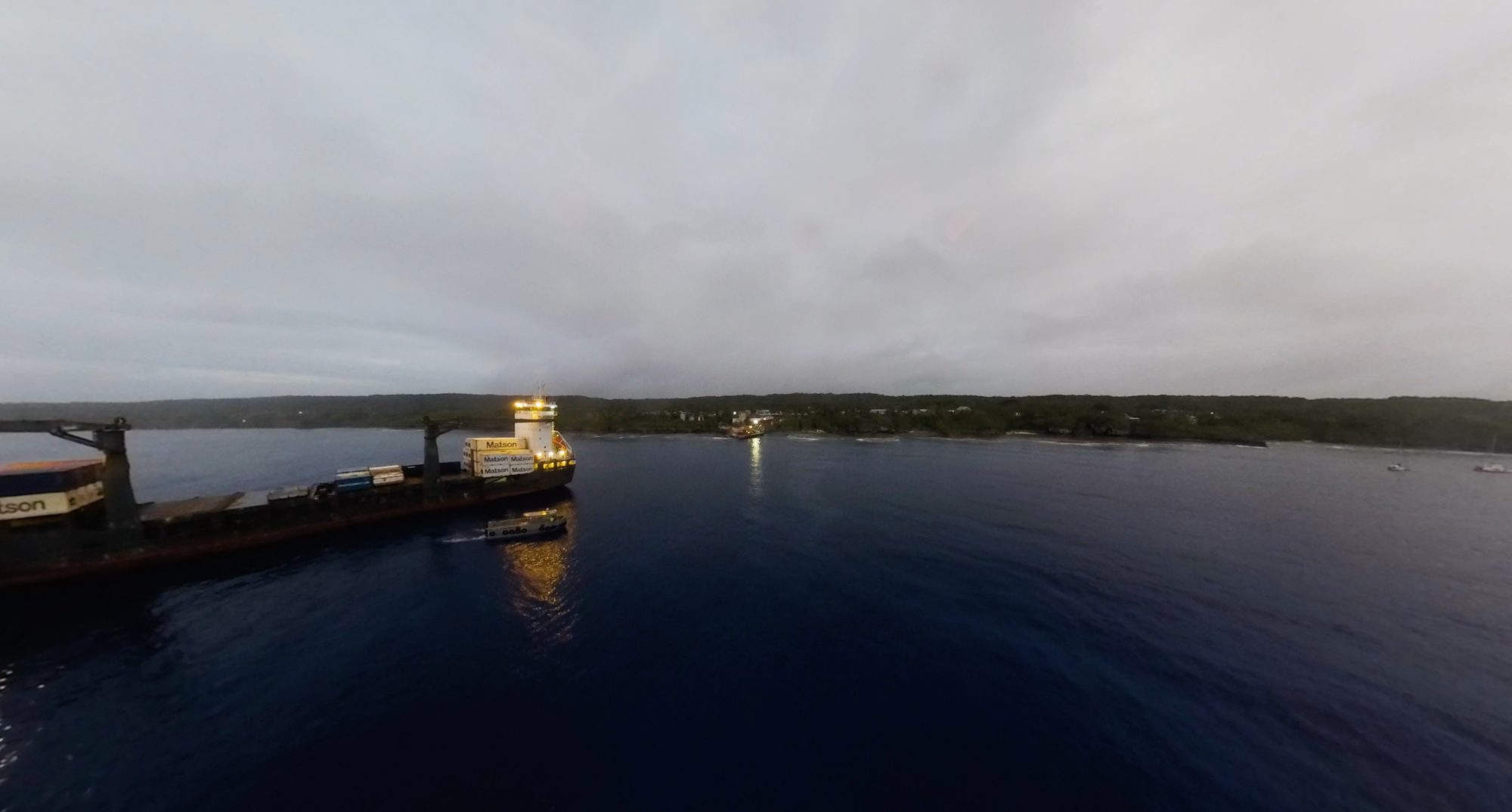 Each month a freighter pulls up to Alofi, Niue’s capital and port, to offload food, fuel, building materials and Japanese cars. Imports are nine times the value of goods exported from the island, and the difference is made up by aid and tourism.

Protecting 40% of its marine estate reflects a desire to conserve the environment, but also an ambition to make Niue’s economy more financially, socially and environmentally sustainable.