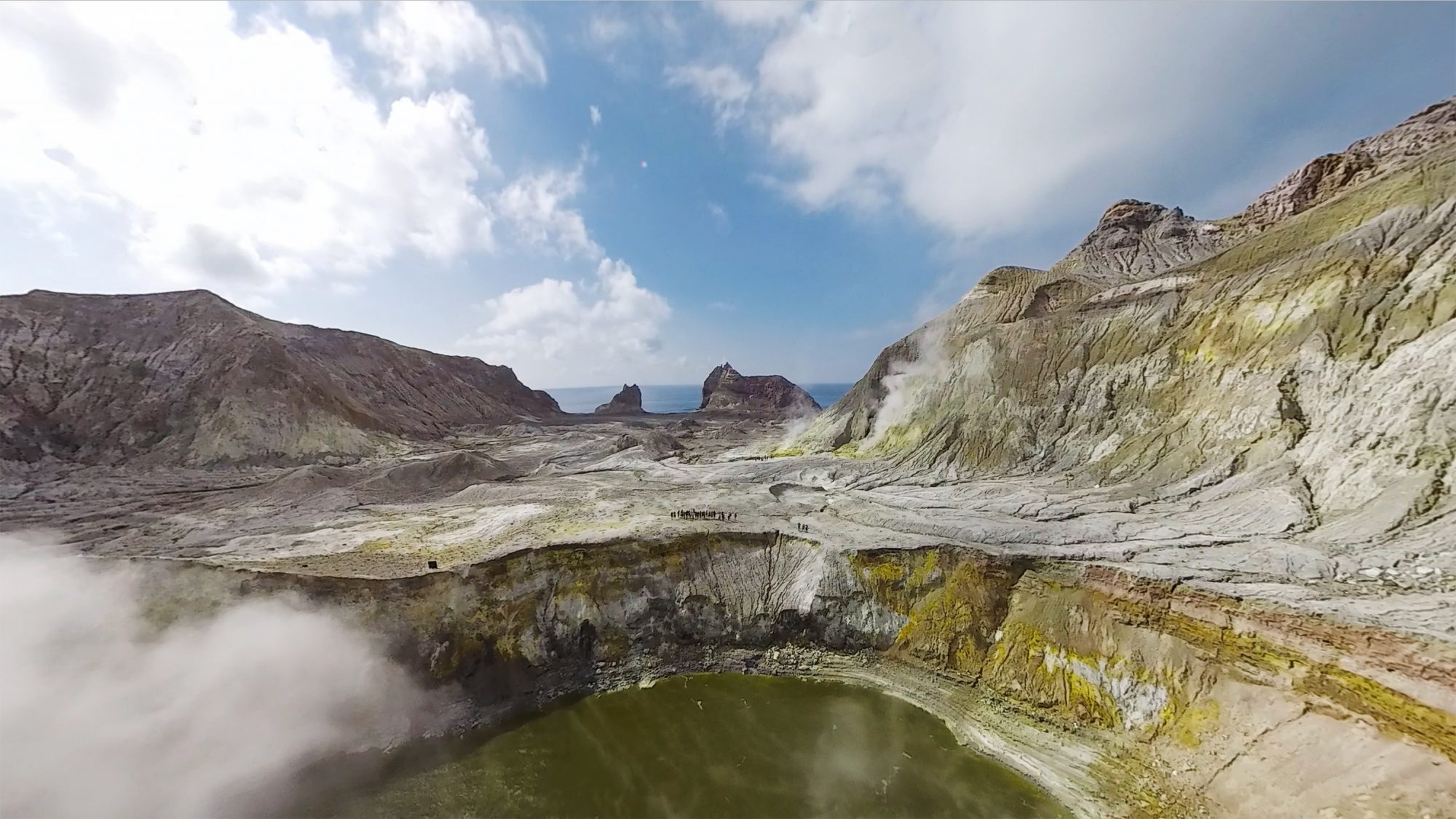 Fly over the acid lake

A tour party gathered at the edge of the crater lake marvels at the 55ºC pistachio-green pond of acid, boiling and erupting in sulphuric plumes before them. It’s 60 times more acidic than battery acid.

There have been three attempts to mine sulphur on the island. None were successful, and one ended tragically with the death of all 10 miners in an eruption. (Only a cat survived.) 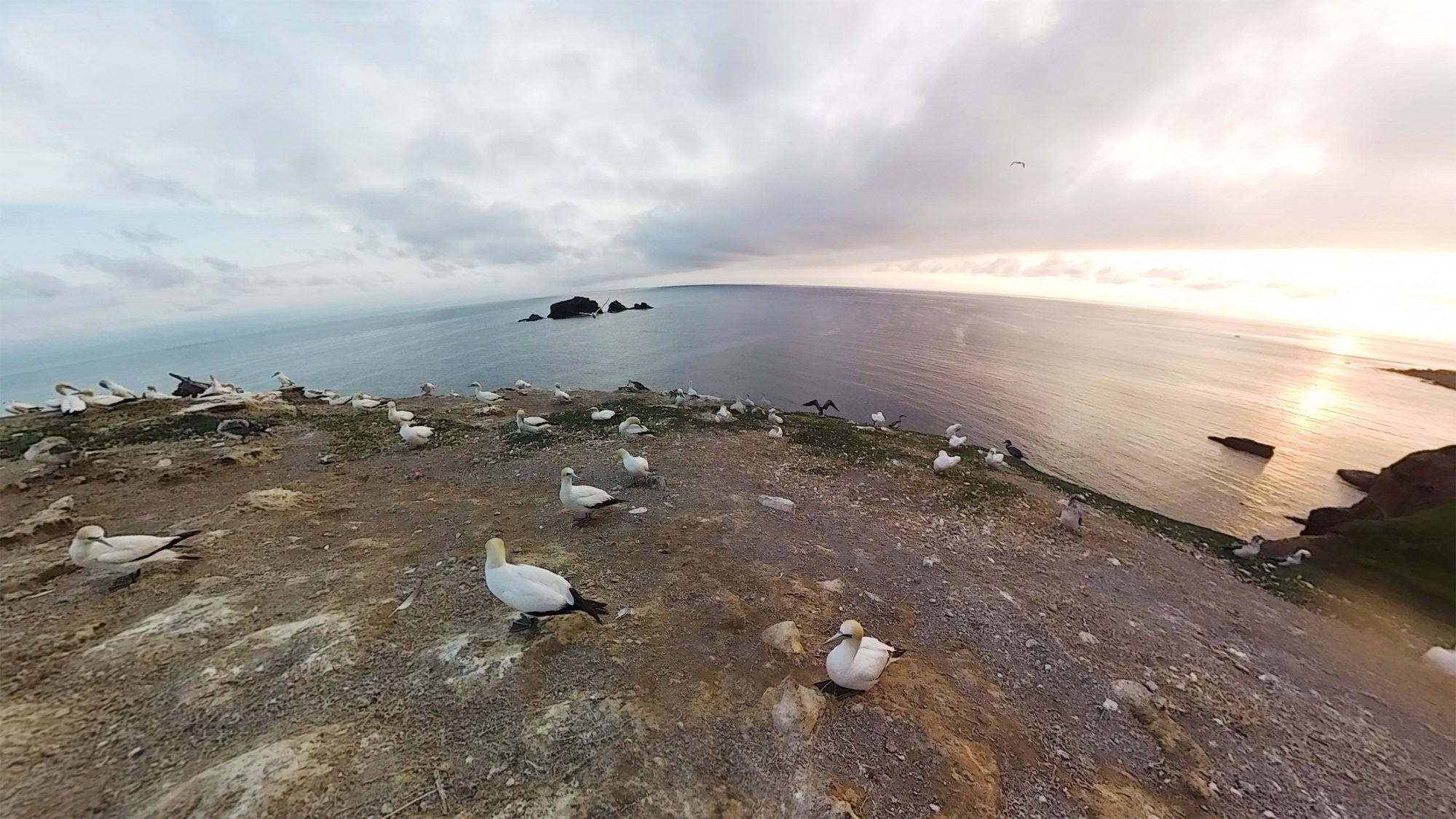 White Island hosts 3000 pairs of gannets, which gather in a colony at the southern side of the island across summer. Now late-March, many of the chicks have fledged and the colony has thinned, leaving only stragglers developing their primary flight feathers to take the plunge from cliffs and into a new life at sea. 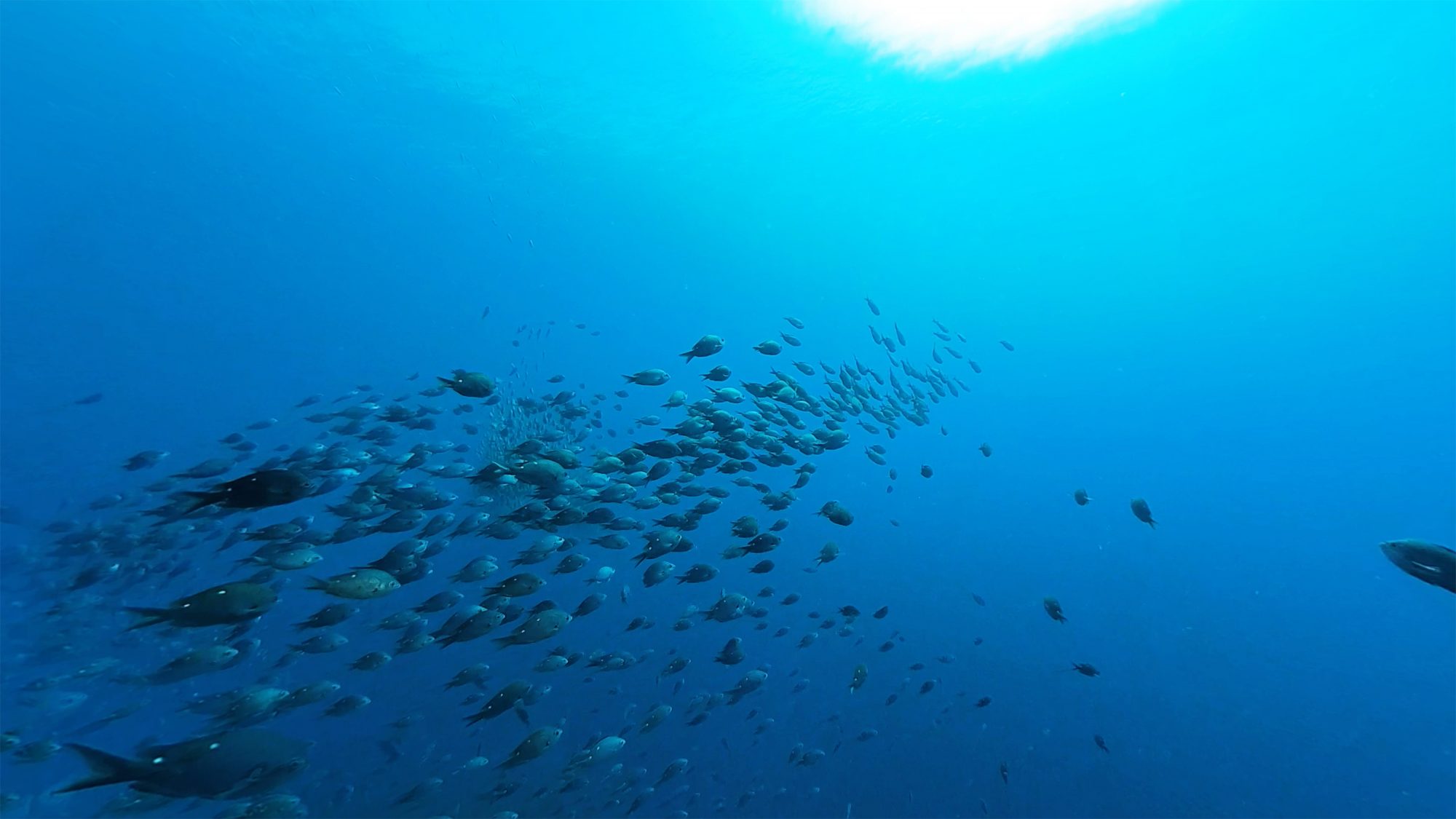 Like a flock of starlings, two-spot demoiselles and flashy koheru form dazzling murmurations at a sharp pinnacle called Laisons Reef off the coast of White Island. Pinnacles like this focus fish life at a single point in open sea.

But while there are plenty of reef fish present, there is a profound lack of predators, such as kingfish, which have been heavily targeted at this and other reefs lacking marine protection. 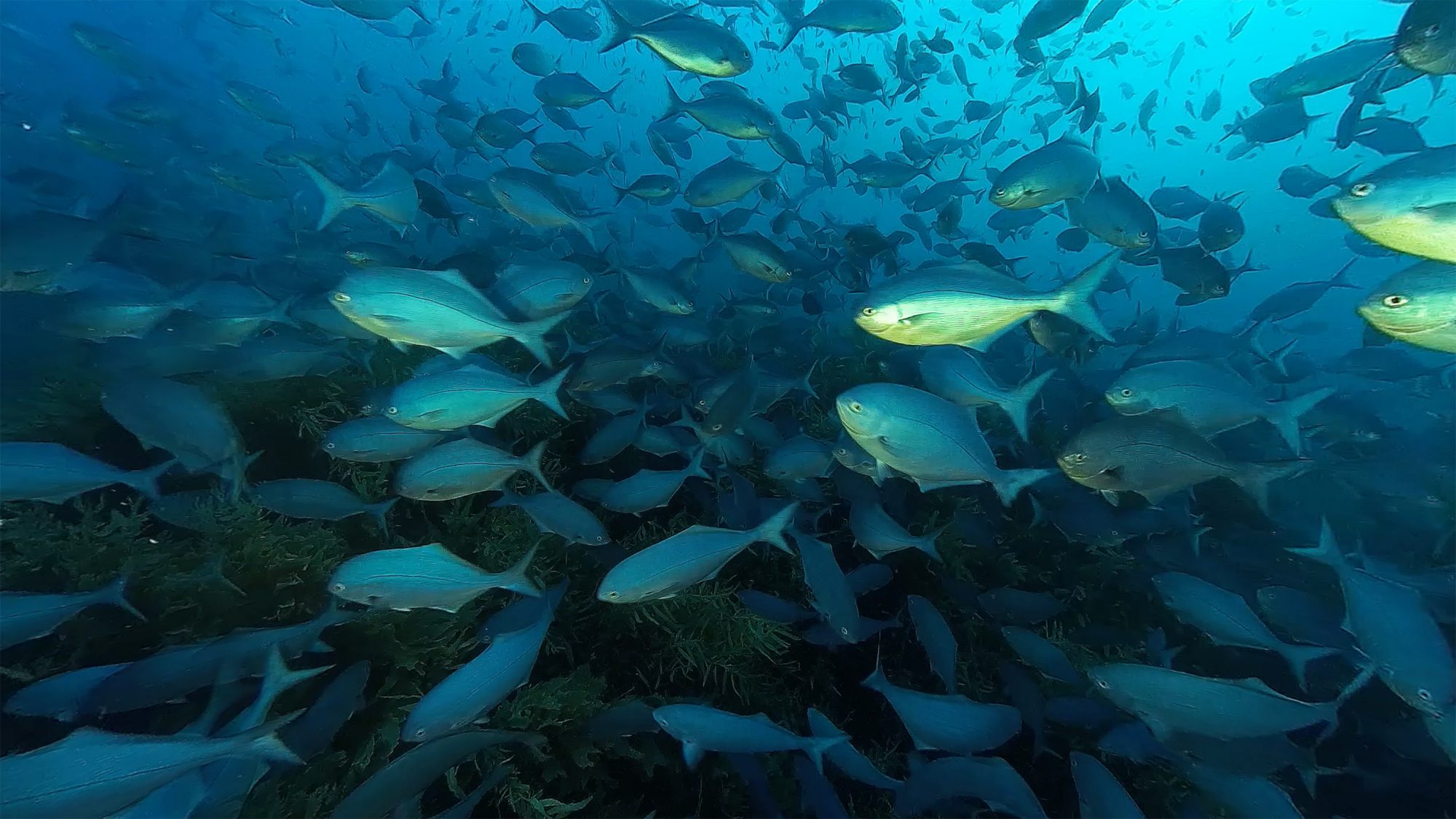 Dive with the swarm

Volkner Rocks—once used by the navy for target practice—are now a marine reserve. And it shows. Blue maomao throng about the pinnacles, and barrel-like kingfish cruise past in platoons. Yet, even here the door is open to fishers. Like a missing slice from a pie, the boundary of the marine reserve allows fishing almost in the centre of the circular reserve.

When the Rena wrecked on Astrolabe Reef in 2011 an exclusion zone was established around it. Within two years it became a rich and diverse biodiversity hotspot, heaving with fish. The exclusion was later lifted, and fishers decimated the reef within months. Key sites around the Bay of Plenty need protection. 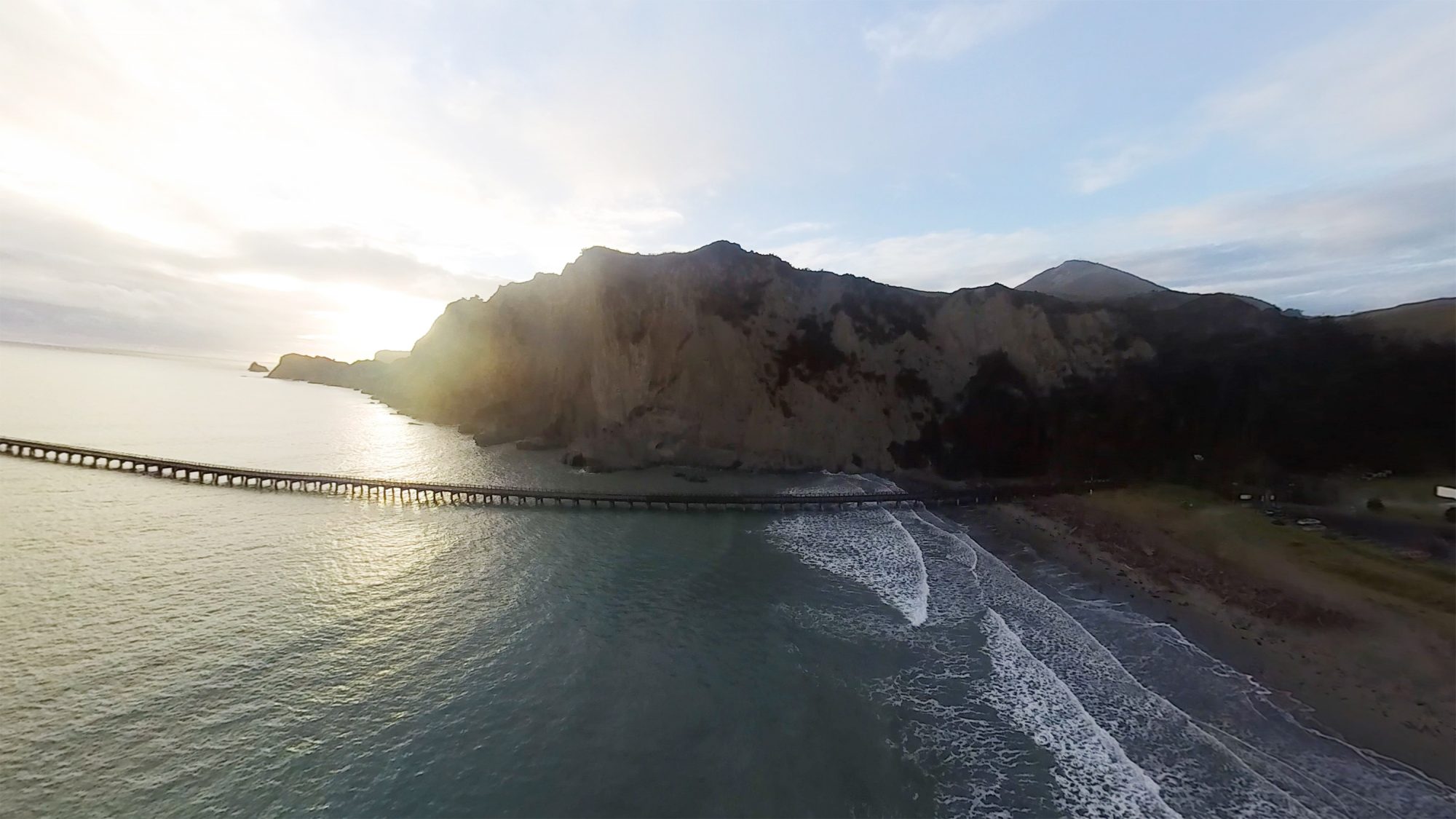 The 600-metre wharf at Tolaga Bay is the second-longest in New Zealand; built to accomodate cargo vessels that were the lifeblood of the region’s agriculture industries. Today it appears to be primarily used for strolling and selfies. 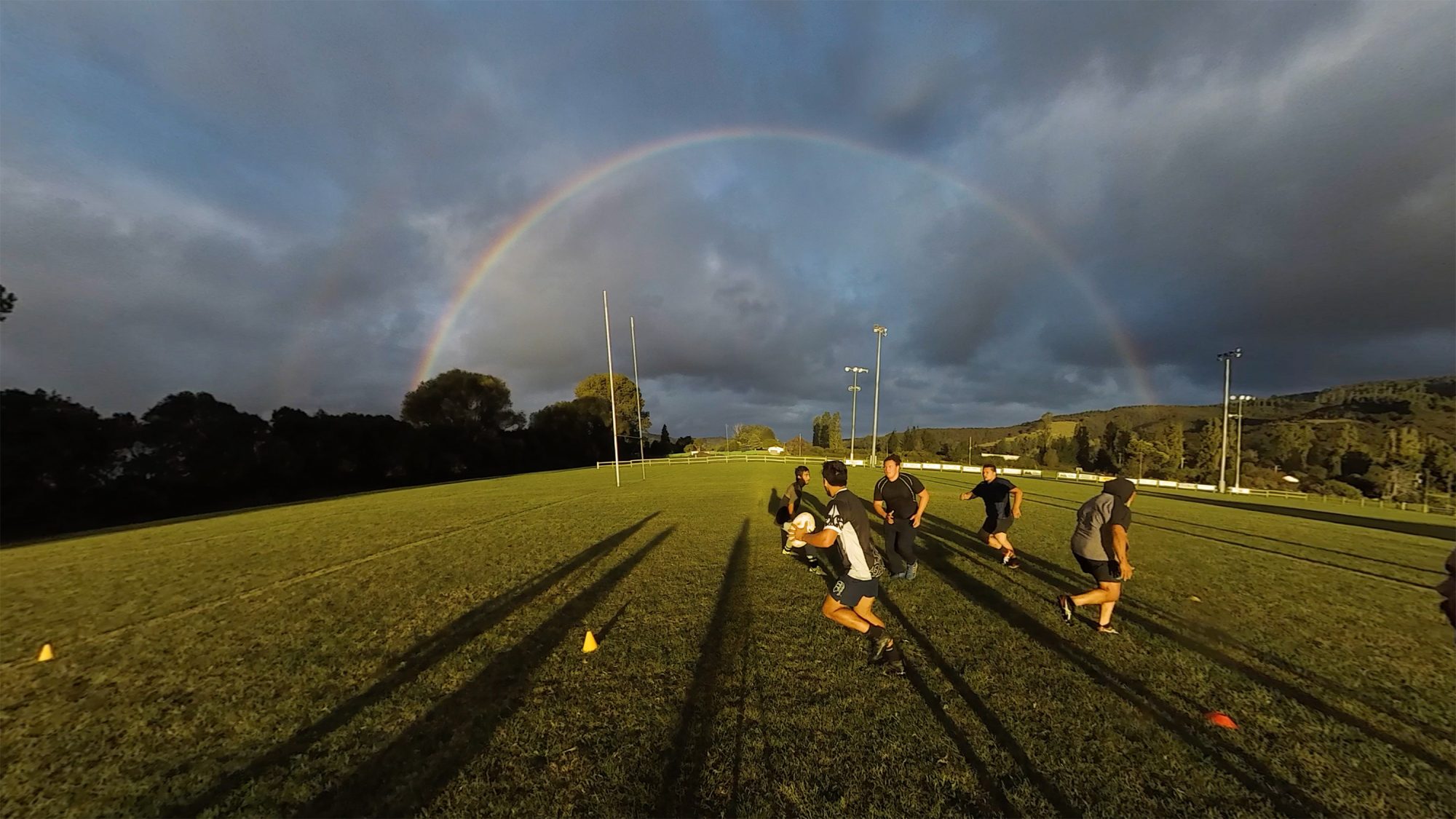 Train with the boys

The utes arrive for evening footy practice at the Hikurangi Sports Club. The East Coast Football Union is the only club in the country founded by iwi—Ngāti Porou. It is also the smallest union in the country, but has nonetheless won the third division twice, and narrowly missed winning second division on their first promotion in 2001. At least half the training is conducted in te reo. 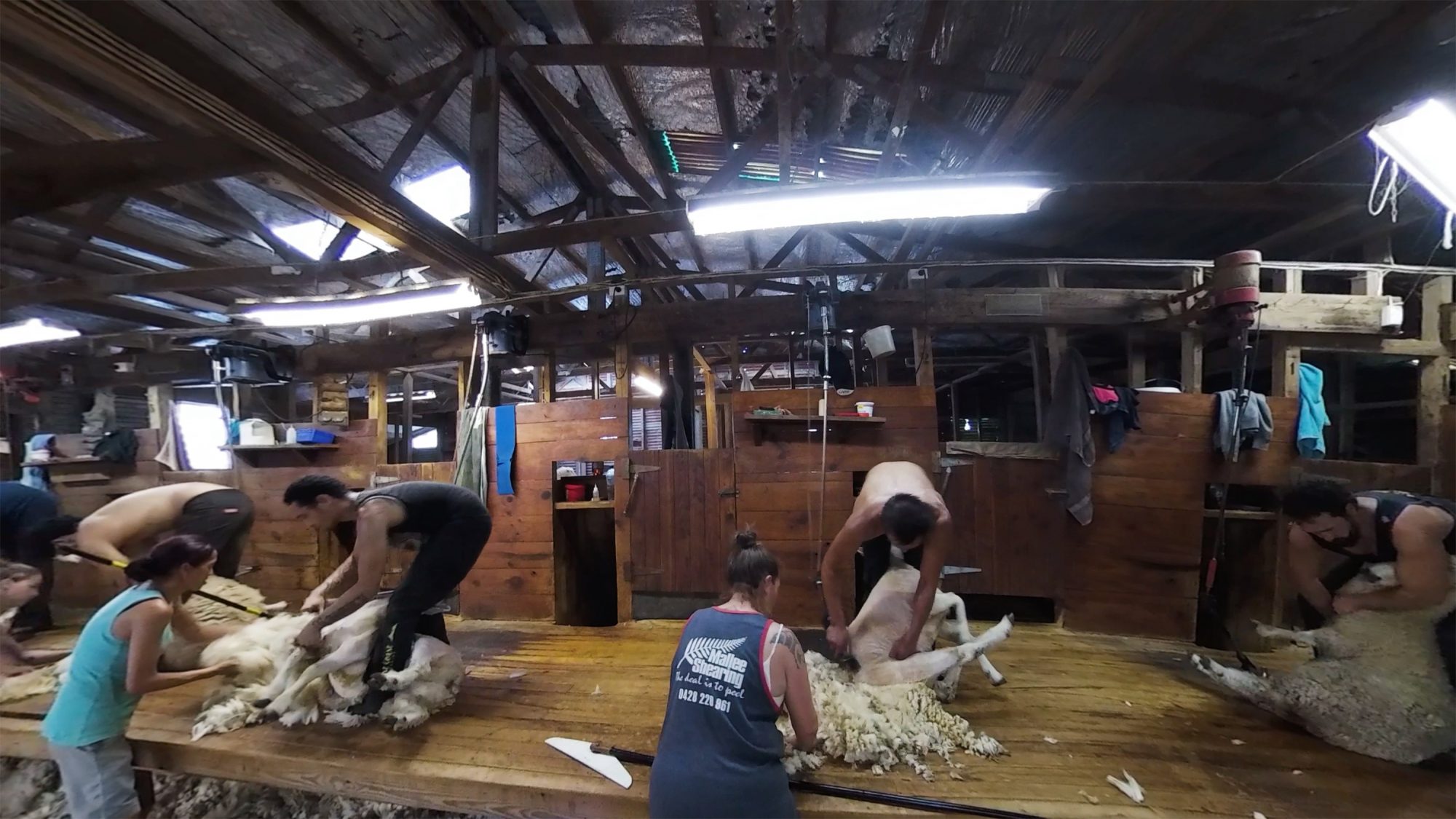 Though nearly 5pm, Harry’s shearing gang digs deep to work through the last ewes on Waikura, one of the most remote dry-stock stations in New Zealand that stretches most of the length of the Waikura Valley. The gang is paid per sheep, so there’s little time for rest. 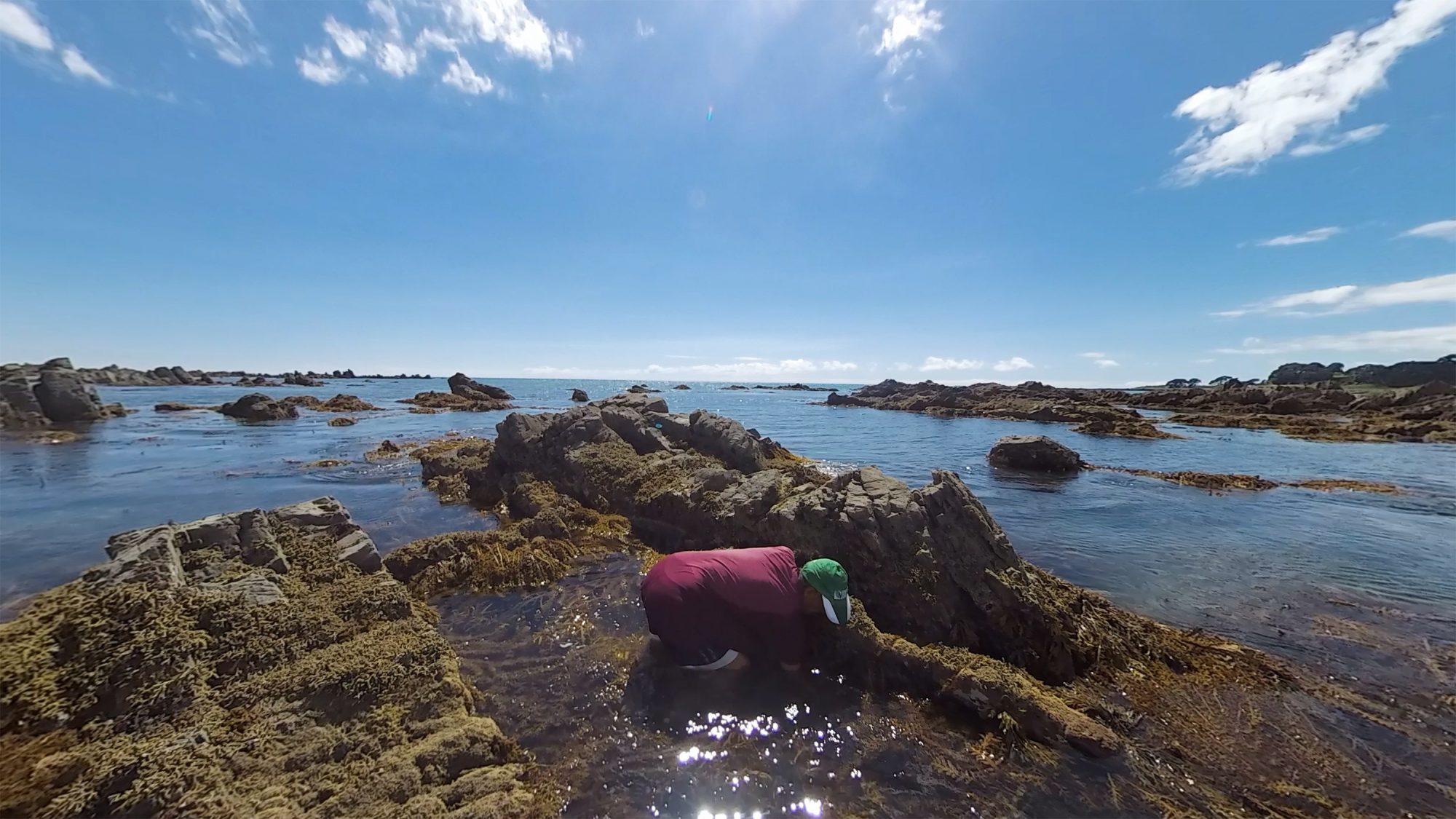 Collect kaimoana with the vicar

Elaine Kasper doesn’t have far to go to collect a feed of kina—the rocks outside the historic Ruakokore Church usually provide a shopping bag full in a few minutes. As a child she recalls catching crayfish here, but they’re a rare sight now. Next month she’ll be officially installed as the vicar of Ruakokore, visible on the promontory, to the left. 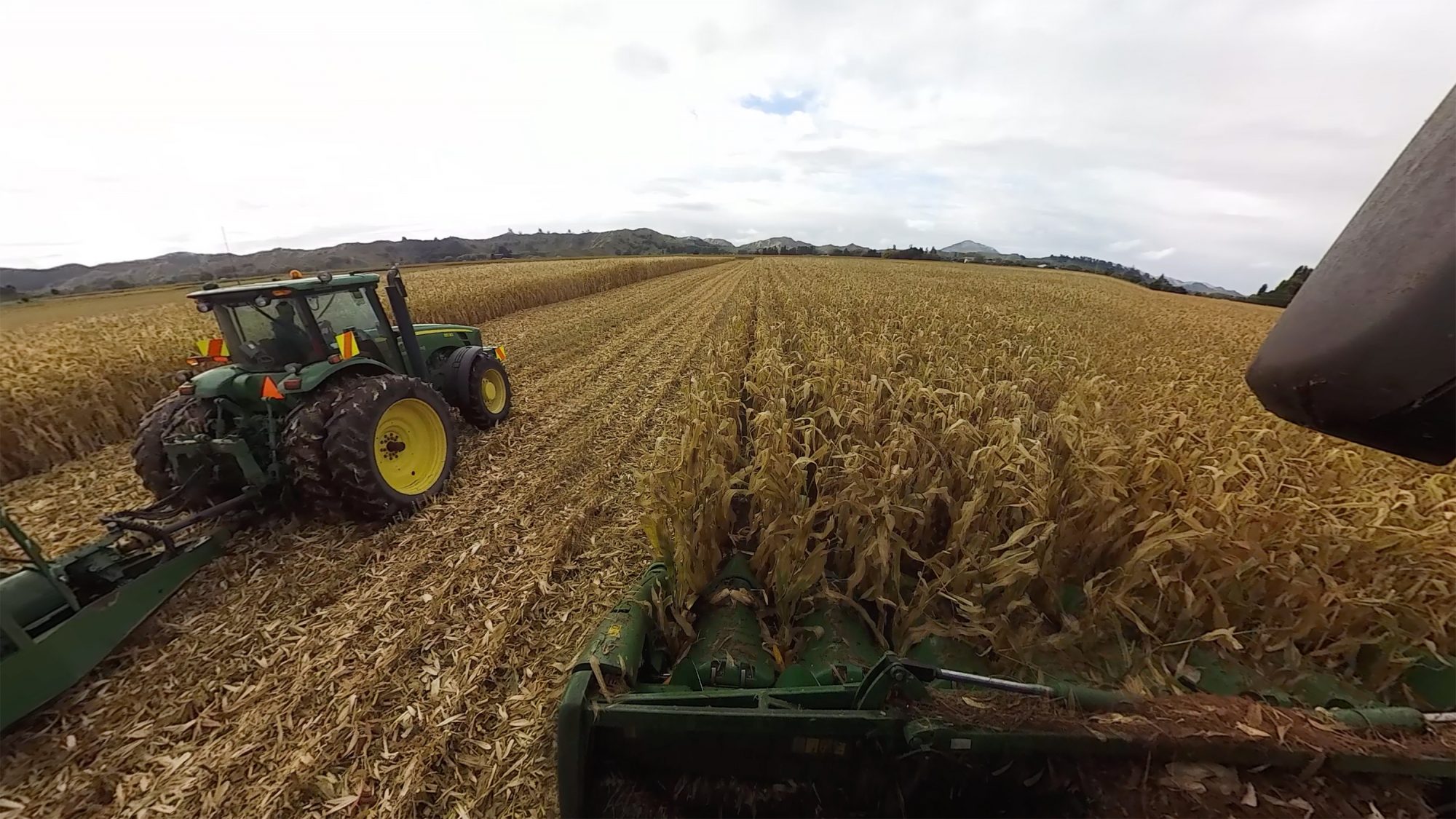 Though still damp with autumn rain Tony Ferkins decided it was “better to be cutting than doing nothing”, so fired up the combine harvester. He’ll be able to go twice the speed as the maize dries, but in the meantime it allows tractor driver Jacob Gueze plenty of time to line-up the hopper. 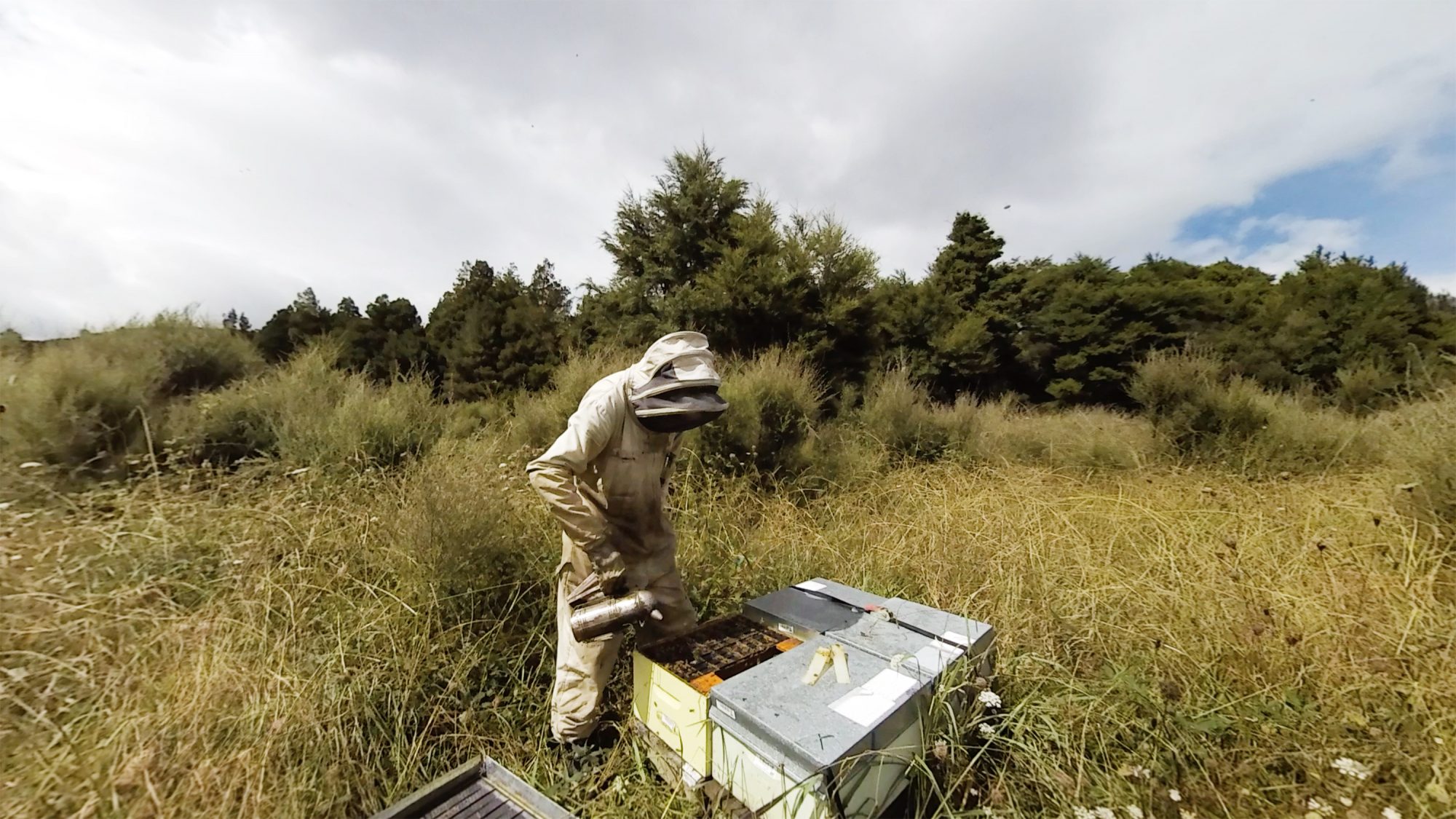 Pat Nukunuku inspects frames and inserts new queens to maintain good production on his hives. With thousands of hectares of mānuka, the East Cape is one of the chief centres for mānuka honey production in New Zealand.

The East Cape is uniquely susceptible to climate change. In particular the pattern of El Nino/La Nina that results in both floods and droughts for the cape. 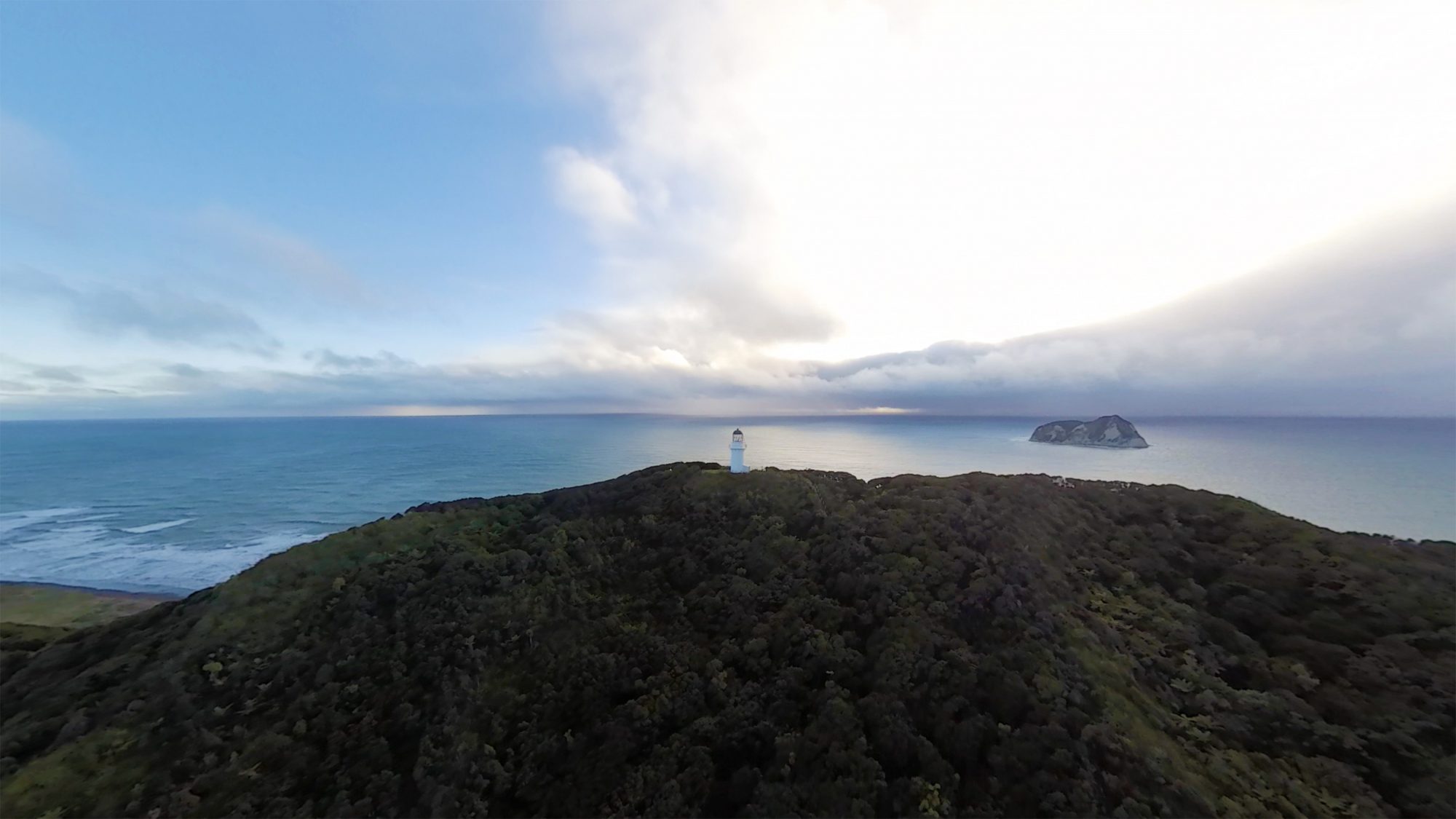 East Cape is one of the first places in the world to see the light of the new day. It will also be one of the first to experience the brunt of human-induced climate change and, being economically vulnerable, one of the least able to accomodate the dramatic changes it brings to life, industry and the environment.