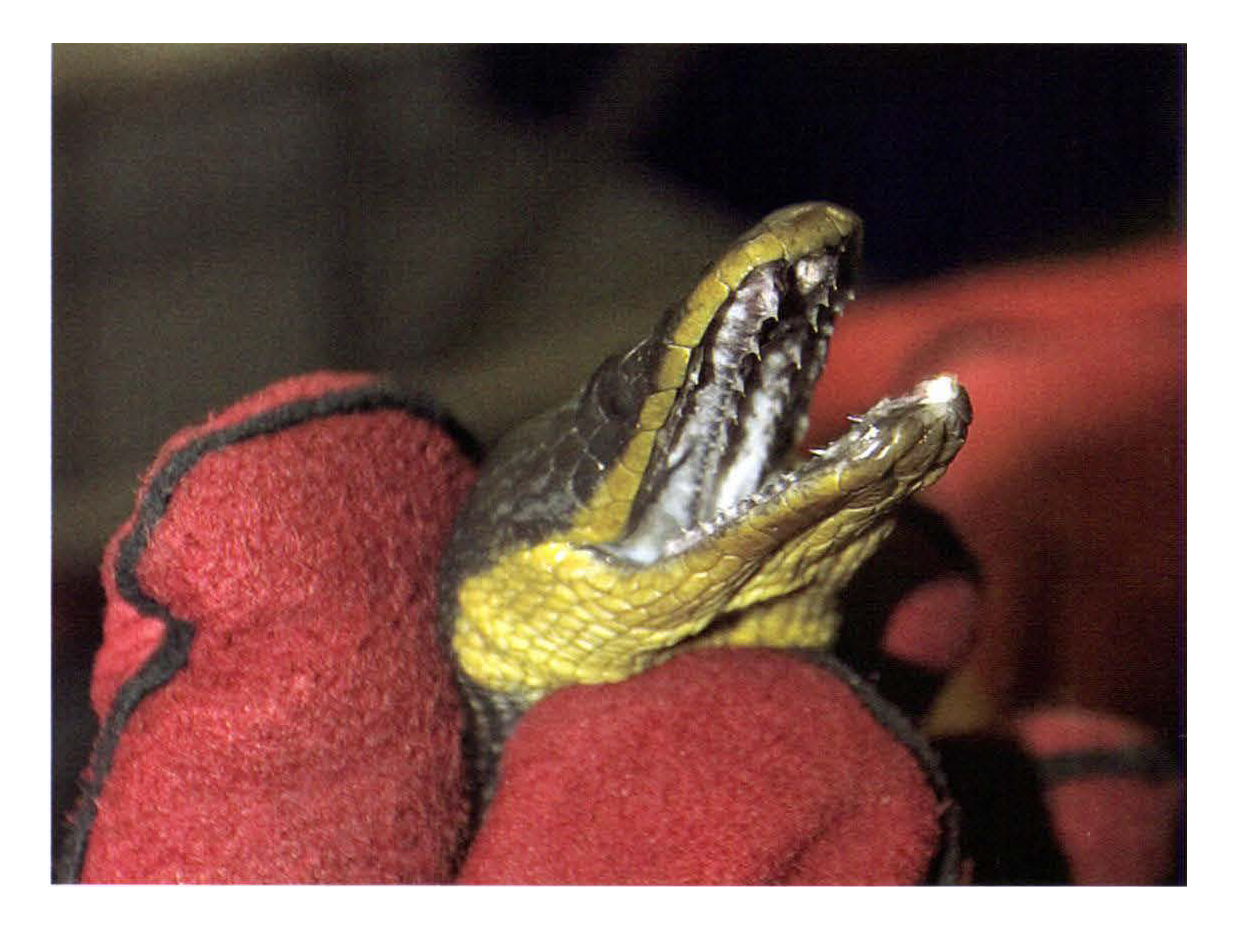 One of New Zealand’s more unusual hospital patients has poisonous fangs and enough venom to kill several humans. It is a yellow-bellied sea snake (Pelamis platurus) that washed ashore, injured, at Muriwai beach early in June 2004. The snake is now convalescing in a hospital tank, maintained at a balmy 23°C, at Kelly Tarlton’s Antarctic Encounter and Underwater World in Auckland. Once a week the curator, Andrew Christie, and his colleagues remove the snake from its tank, weigh it and feed it. A large lesion on its side has healed and the animal has put on weight. The animal has regained its natural “nervous” disposition and can bite, so staff are very wary when handling it.

Perhaps the snake’s nervous temperament is related to its lifestyle, for unlike the more than 50 other species of sea snake, which remain close to shore, the yellow-bellied snake spends its entire life in the open ocean. It is the world’s most widely distributed snake, found in warm waters from the east coast of Africa to the west coast of the Americas.

Yellow-bellied sea snakes travel with surface currents, which, where they converge, tend to form drift lines, or slicks—long masses of float­ing seaweed and debris. The snakes gather and breed among the slicks. Congregations can range from a few individuals to thousands. The spe­cies is ovoviviparous—fertilized eggs hatch, and young develop, in utero. Baby snakes (2-6 per brood) are born able to swim. The snake has a flat body profile and paddle-shaped tail—adaptations for a life at sea that render it incapable of moving on land.

Slicks are also home to dense con­centrations of planktonic organisms, marine mammals and fish. The snakes hide in ambush among the weed where fish congregate. Schools of fish have been observed to gather directly under groups of snakes, which prob­ably resemble floating sticks.

One approach to the capture of prey involves a biting frenzy, in which a snake enters a school of fish and indiscriminately bites everything in its path. A pair of hollow fangs at the top front of the mouth injects venom. The prey is then manoeu­vred so that it can be swallowed head-first. Four rows of backward-curving teeth hold it during swallowing. The ligaments that hold the jaws together are quite flexible, allowing the lower jaw to dislocate so that large prey can be ingested. Typically one side disengages at a time, and the jaw “walks” the food backwards into the mouth.

To hunt for food the snakes must spend considerable periods beneath the surface, and this requires good breath-holding ability. Indeed, sea snakes can spend over two hours underwater between breaths. This ability is partly due to efficient skin breathing. Up to one-third of a yel­low-bellied sea snake’s oxygen and three-quarters of its expired carbon dioxide diffuse through the skin, significantly extending dive times.

The convalescing yellow-bellied sea snake requires human assistance to feed, so the aquarists at Kelly Tarl­ton’s have developed a special diet and technique. One person holds the snake while another puts food in its mouth using forceps. The snake is fed sprats, triplefins and a high-pro­tein formula used for sick cats, Hill’s A/D Prescription Diet. Strong weld­ing gloves protect the feeders’ hands from the deadly 2-4 mm-long fangs.

A single bite from a yellow‑bellied sea snake injects enough venom to kill a child or young adult. However, a sea-snake bite need not spell immediate death or illness. The majority of bite victims survive with no serious consequences. In The Biology of Sea Snakes, Alistair Reid, a veteran of two snake bites, describes a number of incidents in Malaysia, where he found bites were usually the result of an accident, such as a fisherman touching a snake while handling or clearing a net, or a wader treading on one. Few bites resulted in serious poisoning because little or no venom was in­jected. Snakes that were milked after “defensive” biting retained much of their venom. Most of the victims in the records suffered principally from the effects of fright.

Yellow-bellied sea snakes are carried to northern New Zealand by warm subtropical currents in the western Pacific, such as the Tasman Current, a broad, meandering flow that receives tropical water from the East Australian Current. Brian Gill, curator of land vertebrates at Auck­land War Memorial Museum, has studied records of sea-snake land­ings in New Zealand. Yellow-bellied sea snakes regularly wash ashore along both sides of the northern end of the North Island—perhaps two to three per year. The total number of landings by all species of sea snake is probably ten times this number. Eighty per cent of snakes found have been alive.

The black-and-white-banded Laticauda colubrina is another spe­cies that turns up in New Zealand waters, although sightings are rare. It lays its eggs in mangrove swamps or among rocks along the shoreline. One was discovered in the Waihou River near Te Aroha in 1945, 20 km inland. Generally, the sea around New Zealand is too cold for these tropical creatures. Brian Gill believes that many of the sea snakes that wash up on our beaches are dying from the cold.

What does the future hold for the hospitalised snake? Andrew Christie told me that he would like to release it back into the wild once it has fully recovered, but this will require approval from DoC. Details are still being finalised. In the meantime, our sea-snake guest will continue to receive first-class New Zealand hospitality.