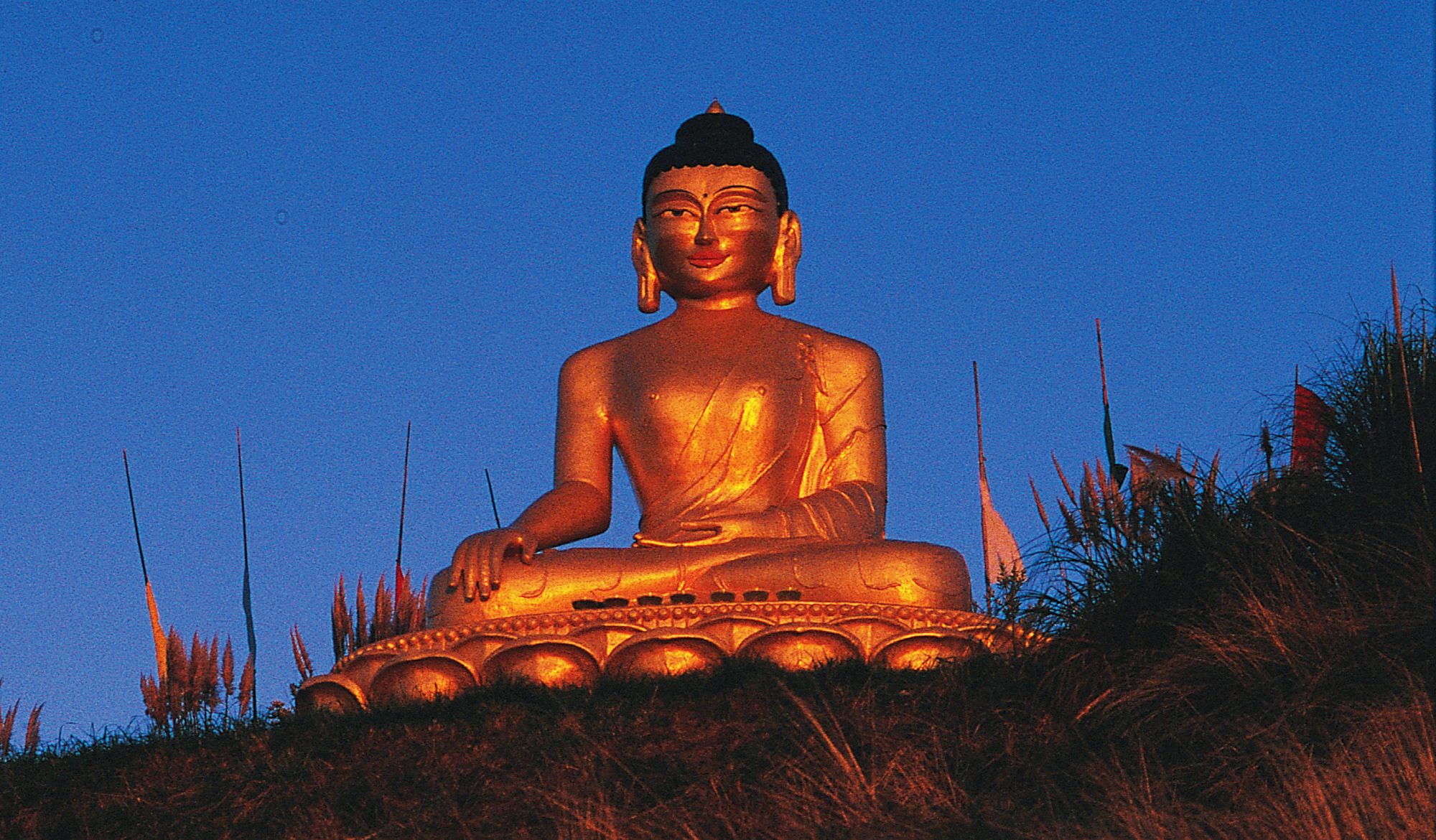 Some time in April 1996 I began to photograph the places of worship of some of the lesser known of New Zealand’s many ethnic communities. As an immigrant in a land of immigrants, I wanted to see how ethnic groups preserved their own ways while surrounded by a powerful mainstream culture.

For my own part, having lived in four different countries in the space of 20 years, I had found that the processes of adaptation, while providing priceless insights and experiences, had left me feeling bereft of the comforting continuum of living among people of the same background. I was curious to see how others had dealt with that sense of loss.

There was also the hint of a spiritual quest the perhaps naive belief that beneath all the varied rituals and doctrines I encountered I might find enough common elements to justify some claim for a universality of human experience.

“Truth is one, but sages call it by many names,” say the Hindus. Prayer certainly takes several forms, and the faces of God are many, but the starting point for each person seems to be the same that of wanting to touch a fragment of understanding of the Divine.

Diversity is often interpreted by outsiders in terms of clichés “Indians have arranged marriages,” “Jews perform circumcisions,” “Buddhists chant a lot, don’t they?” Such stock responses, although in themselves not necessarily a bad thing (they function as a kind of mental shorthand) become a grave limitation when they are accepted as informed opinion. Even limited understanding has to be based on more than common preconceptions.

Joseph Campbell, one of the greatest students of the depths of ritual and belief, said that to study the religion of others is not just good but actually necessary for one’s own spiritual progress. The reli­gious scholar Ninian Smart added that “the voyage into other folks’ beliefs and practices may turn out to be a journey into your neighbour­hood. Cities are microcosms of the whole world. This is an added reason to know something of others.”

It could be argued that appreciat­ing, if not understanding, our neigh­bours and their cultural differences is no longer a luxury or a fancy of the classically educated but a pre­requisite for peaceful co-existence in an increasingly complex world.

Sakya Trizin, a Tibetan lama who visited New Zealand recently, said: “It is important to keep every tradition alive as part of the world, to complete the world.” There is an innate attractiveness in the idea that each culture complements all others to form a full picture of humanity. A Chinese sutra, the Hua-yen Ching, describes a mythical jewel net in which every stone reflects all of the others a clear reference to the interconnectedness of all things.

For scattered ethnic communi­ties the multiple diasporas of the modern age preserving the belief systems and religious practices that amount to each group’s common heritage therefore has a significance beyond just group affirmation. Affirmation, though, is reason enough. The very belonging to something larger than oneself as a member of a congregation and, thus, as a member of a faith may be taken for granted “at home” but becomes of vital importance in an immigrant context.

Often the place of worship serves as a point of community focus by default: by bringing together one’s compatriots for the purpose of worship, we preserve our culture far from ancestral lands.

The Tsi Ming Temple in Greenlane is a good example. Prior to its construction in 1990, the Auckland Chinese Buddhist community used to meet in people’s homes. The temple has not only given the community a focal point, it has enlarged the congregation, says Rusty Rolfe, a New Zealander of European descent who is married to a Chinese woman.

“A new great hall was built in 1995, but now even that is too small on some festivals,” he says. “Inter­estingly, the temple sees far more men coming to services than in either Taiwan or Hong Kong, where most of the gatherings are made up of women. This is owing to New Zealand’s more relaxed work sched­ules and longer weekends.”

As well as offering regular prayer and meditation opportunities, the temple offers classes in vegetarian cooking and flower arranging, kung fu instruction by visiting sifus and two-way language courses English for new migrants and Mandarin for their children, who, growing up in an English-speaking environment, are likely to forget it.

Across in Balmoral, the experi­ence of the Hindu community has been similar. Bharatiya Mandir, whose white gopuram towers above the surrounding villas and bunga­lows, was built by the organisers “with some trepidation,” says Keswa Lal, the temple’s social affairs officer. “Since the temple was built, the number of devotees has in­creased dramatically. To start with, we thought maybe a couple of hundred people would show up on major holidays. Now we can’t accommodate everyone. Sunday school started with three children we now have over 200.”

The temple serves Hindus who have arrived from Fiji, Sri Lanka and African countries, as well as India. “Some people, when they land here, are very lonely. We have had ones who were so depressed, they wanted to go back to where they came from, but when they found the temple and met everybody, made contact with people in their profes­sions, say, their morale changed very quickly,” says Lal. “Sometimes we even try to offer marriage guidance,” he adds with a smile.

For many immigrants, the opportunity not commonly encoun­tered in the mother country of meeting faith members from other countries and cultures is a real plus. The Muslim faith, in particular, unifies migrants from Africa, the Middle East, South-east Asia and elsewhere. After prayers, Bosnians, Turks, Indonesians and Africans stand around and talk about their families and jobs in English, in Anglo-Saxon/Polynesian New Zealand! It truly is a small world.

In countries such as New Zea­land, whose populations are largely composed of migrants, rather than in the far more homogeneous nations of the Old World, it is substantially easier to seek out and meet people of other religious traditions. Whether by marriage or personal inclination, many Euro­pean New Zealanders have chosen to embrace other faiths. The Mus­lim Converts Association in Auck­land gains 50 to 100 new members each year, mostly New Zealand women who have married Muslim men, but also students of the faith making the final step in accepting it as a way of life. Sometimes entire families convert.

Nowhere is the infusion of converts from outside the immediate circle of migrants better witnessed than at a major puja (ritual) at the Tibetan temple in Kaukapakapa, north of Auckland. The tiny Tibetan community becomes virtually lost in the midst of the hundreds of Euro­pean New Zealanders who have taken on the Buddhist way.

In the course of this work I was met with nothing but acceptance and hospitality, if mixed with healthy curiosity. Communities seemed eager to “show off” what they did as not being that different from what everyone else was up to, just dressed in different garb and playing a different tune.

A Muslim man, after prayers marking the end of the holy month of Ramadan, gave me a bear hug and proclaimed that we were brothers. A Russian man welcomed me with a smile that lit up the evening sky at an Orthodox Christmas midnight mass, and a Jewish woman, seeing that I obviously knew no other soul at a Hanukkah gathering, brought me a bowl of fruit and introduced me to her family.

I watched the rising sun light up the face of the golden Buddha statue at the Karma Choling, the Tibetan temple of Kaukapakapa. The statue’s eyes had been painted in “opened”by the Dalai Lama himself.

Two hours’ travel south brought me to the Sikh temple outside Hamilton. Not much was going on, but the temple guardian welcomed me in for a cup of cardamom-scented tea anyway.

On another occasion, during a visit to Wellington, a short diversion from State Highway 1 at Stokes Valley brought a quiet afternoon’s reflection at the breathtakingly beautiful Buddhist monastery there.

I have enjoyed spending time with people whose culture and religion seem to be a part of life, not apart from it even if I felt that I was the only man alive to have spent time at a Chinese temple, a Hindu mandir and an Orthodox church all in the space of 24 hours.

In the end, the work itself became a yatra (pilgrimage). But rather than being one continuous progression, this one was composed of snatched moments, rosary beads of a few hours here and a day there threaded on to the daily run. Hindu men with earthy complexions and broad smiles, lighting incense. A slow procession of Thais, lining up to bathe the hands of a gathering of bhikkus (monks). Two Russian men, both with handlebar moustaches, chatting quietly outside their little Orthodox church. Tablas and harmonium played at a Krishna festival. Candles. Water. Sound. Silence.

Land of the Midnight Sun

A Strine on Te Reo