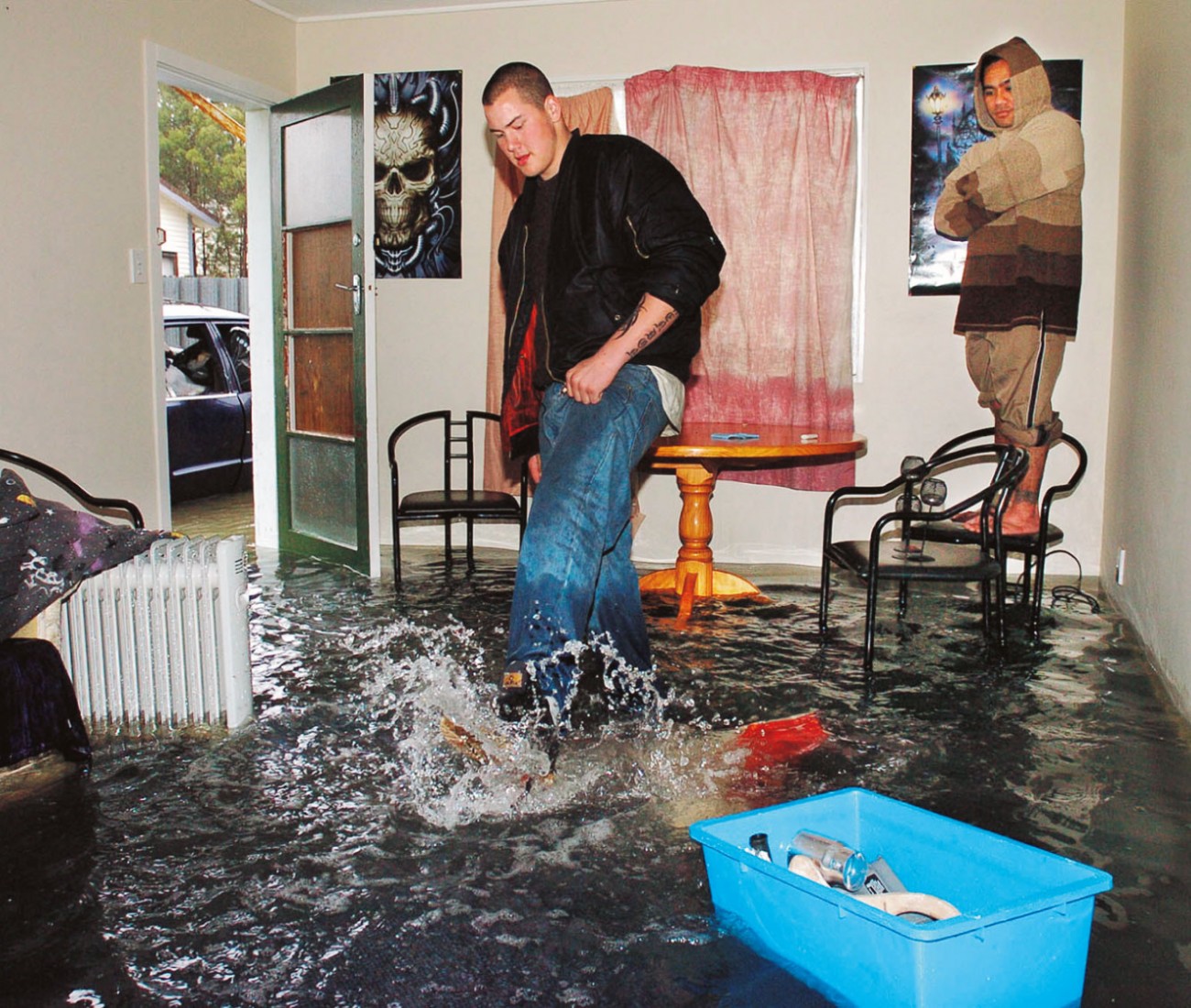 Late winter and early spring often bring some of the most destructive storms New Zealand experiences, storms which bring the full gamut of severe weather conditions and can last for the best part of a week.

One such storm began on the weekend of August 14–15, 2004, when an intense trough of low pressure crossed the country. Strong humid north-west winds blew over the Tasman Sea and into the Southern Alps ahead of the trough. Forced to rise over the mountains, the air dumped heavy rain into the headwaters of the West Coast rivers, bringing them into flood.

Squeezed over the mountains and through Cook Strait the north-west wind reached severe gale force in many eastern areas from Wairarapa to North Canterbury where one blast tore down a garage in the town of Oxford. In Wellington, gusts in excess of 160 km/h occurred but damage was slight.

In Taranaki, however, a severe tornado descended from a thunder­storm cloud, completely destroying a house near Waitara and killing two of the occupants. Striking just before dawn, the tornado lifted the house from its foundations and tore it to pieces as well as flattening nearby trees and power poles. Debris was strewn across half a kilometre of farmland, and one of the survivors was dropped 150 metres away. Sev­eral farm sheds were also destroyed, killing 70 calves that were housed in one of them. Power was cut to about 1200 homes.

This was one of the worst torna­dos to hit New Zealand and the first to cause fatalities since 1991, when a man was killed by flying debris in Al­bany near Auckland. On that occa­sion, a band of thunderstorms swept across North Auckland spawning a number of tornadoes. Although de­struction was widespread the storm was notable for several miraculous escapes. A hall occupied by more than 100 people attending a tangi south of Dargaville was destroyed by one tornado, yet the worst the occu­pants collectively suffered was a few broken bones and cuts and bruises.

Another building at an outdoor pursuit centre near Albany held a primary school class when it was de­stroyed. As the roof blew away and the walls fell out, the children were swept onto the ground next to the foundation without serious injury.

The worst tornado strike in New Zealand history was in the Hamilton suburb of Frankton in 1948. Around 150 houses were wrecked and 3 people killed. Some debris was car­ried as far as Cambridge.

Tornados are just one of the fatal hazards associated with severe thun­derstorms. Flash floods and light­ning are the others. Indeed, in New Zealand the chance of being hit by lightning is probably greater than the chance of being caught by a tornado.

As the trough of low pressure swept across the country, it was followed by very cold air originating from near Antarctica. Snow fell to sea level in Southland, Otago and Canterbury and to very low levels in the North Island making this one of the most notable snowstorms in dec­ades. Many roads were closed, from the Napier Taupo road in Hawke’s Bay, down to the Milford Road in Southland. Farmers had plenty of warning and had moved stock to shelter or to lower altitudes where possible.

Lambing had not yet started in the far south but was underway in some North Island areas, including some unscheduled lambing in the Mana­watu where damage to fences during the February floods had allowed rams to pay social visits to neigh­bouring farms.

The snow closed airports and made driving hazardous, contribut­ing to a number of minor accidents. But the snow was good news for the ski fields, although it increased the backcountry avalanche risk. Visitors in the hotel at Milford Sound could hear the roar of avalanches back up the valley during the night. Several tourists were injured when a party of heliskiers was caught in an ava­lanche in the Humboldt Mountains near Glenorchy.

The avalanche risk had already been high for some weeks. Another avalanche, the day before the storm began, caught two mountaineers climbing Mt Pallisade in Marlbor­ough. One broke a leg and the other an arm as they were tumbled hun­dreds of metres down the mountain. Inspired by the recent survival movie Touching the Void, they helped each other climb down the mountain to safety.

Once the cold southerly had swept over the whole country, the storm unleashed its last trick. A low developed in the trough just north of Auckland, deepened rapidly, and be­came slow moving east of Hawke’s Bay on Wednesday the 18th. As the central pressure in the low fell to 975 hPa, pressures rose over the South Island in response to a ridge spread­ing east across the Tasman Sea. This produced an intense pressure gradient over central New Zealand causing one of the strongest souther­lies in decades.

Wind gusts reached 178 km/h on Mt Kaukau, 160 km/h at Brothers Island in Cook Strait and 132 km/h in Kelburn. Trees were blown down all over Wellington, many houses lost parts of their roofs and some windows were blown in. Wellington Airport was closed when part of the terminal roof was torn off. Heavy swells battered the east coast of the North Island and waves of over 10 metres were recorded on the Wellington south coast. Cook Strait ferries ceased operation and waves breaking over the railway lines stopped trains reaching Wellington.

As warm air wrapped around the low centre and over the North Island, the snow turned to heavy rain causing flooding in Wairarapa and Wellington. Over 100 mm of rain fell in the Rimatuka Ranges in less than 12 hours. Sixty roads throughout the Wairarapa and Tararua districts and another 40 in the Manawatu were closed by floods and slips. A woman postal worker was drowned near Masterton when her car was swept away by floodwaters.

There are several reasons why this time of year is conducive to these storms. Firstly, as the long polar night is ending, the sea ice surrounding Antarctica has nearly reached its maximum extent. This means the journey for the cold air from the ice to New Zealand is at its shortest.

Secondly, the northern hemi­sphere monsoon is at its maximum activity. At high levels, rising air from the monsoon spills over into the Southern hemisphere. As this air moves away from the trop­ics towards mid-latitudes it moves closer to the Earth’s axis of rotation but retains its equatorial momen­tum. Consequently, the air speeds up, relative to the Earth’s surface, thereby strengthening the winds in the subtropical jet stream to speeds of 350km/h or more. When a wave runs along the jet stream, large amounts of cyclonic vorticity are generated and carried downwind—a situation favourable for the rapid deepening of a surface low.

However, there is some consola­tion to be had in the fact that these lows usually track further east of the country than this one did. New Zealand’s weather would be much worse if we were located 500 km further east.