There is a competition running in the land which is more popular than Lotto, more intense than rugby and more regular than horse racing. It is the nightly showing of the day’s maxi­mum temperature at the beginning of the weather forecast on television.

The reward for winners seems to be the reassurance that they live in the best place in New Zealand, while the rest feel smouldering resentment that the numbers must somehow be wrong—usually because they are measured in the wrong part of town. This leads to frequent offers to move the site where the temperature is measured—preferably to a warm asphalt carpark. Some aggrieved centres seem to consider that if only their true warmth was appreciated, a flush of tourism and consequent financial well­being would be generated. More realistically, this concern is probably moti­vated largely by the sheer pleasure of saying “we’re hotter than you.”

In some cases the argu­ment for moving the thermometer site may be justified, as temperature can vary considerably over short distances. In many coastal settlements, when there is fine weather and light winds, the air temperature drops about the middle of the day as a sea breeze develops and blows cooler air inland from the sea. As these settlements have grown, they have spread further inland, to places where the sea breeze takes longer to reach, and conse­quently the temperature rises higher before the cool air arrives. In some of the larger centres, half a dozen or more measuring sites would be needed to adequately describe the spread of temperatures experienced on a sunny day with light winds.

However, to be of most use for climate studies, it is important that the tempera­ture is measured in the same place over the years. So, once the thermometer has settled in, possibly at an aerodrome next to the beach, there is good reason not to move it.

How the thermometer is exposed to the air is impor­tant too. Direct sunlight falling on the bulb of a mercury thermometer will cause it to rise significantly, the result being more a measure of the strength of the sunlight than the air temperature. Even heat radiated from nearby buildings can give a false reading. Therefore the thermometer needs to be housed in a box to shield it from sources of radiated heat, but the box must be well ventilated to allow air to pass freely through it. The box must also be painted white so that it reflects sunlight and does not heat up. Hence the offer made in one small town to cover the box in black polythene was politely but firmly declined.

The box used in New Zealand, and much of the Commonwealth, is known as the Stevenson screen (right), after Thomas Stevenson, a lighthouse engineer (and also father of the writer Robert Louis Stevenson). He did not actually invent the screen, but refined its design through the introduction of double louvres for its sides.

The operating principle behind a mercury ther­mometer is that mercury expands as the tempera­ture rises, and does so a good deal faster than the glass that contains it. Most substances expand when heated, because the temperature of a substance is actually a measure of the average kinetic energy of its molecules. Water is an interesting exception to this rule, as it contracts when heated between 0°C and 4°C. This is why ice floats, a fact of great consequence for life on Earth.

Credit for the invention of the first thermometer is a subject of some controversy, with the honour traditionally going to Galileo. However, it seems that Galileo’s contem­porary Santorio Santorre, a professor of medicine in Padua, may have a prior claim. In 1612, Santorre published a reference to the use of a thermometer both for medical and meteoro­logical purposes.

Santorre’s ther­mometer relied on the expansion of air in a glass bulb, which forced water to retreat down a glass tube into a vessel of water. A sketch from that era (above) shows a man having his temperature taken with the contraption.

Similar air thermometers were soon in use in other places. Around 1660, Otto Guericke, mayor of Magdeburg, constructed a thermometer three metres tall made of copper and brass, and attached it to the outside wall of his house, where it attracted consider­able interest as an example of a perpetual motion machine.temperature taken with the contraption.

As the vessel containing the liquid for these ther­mometers was open to the surrounding air, they also acted as barometers, which caused the numbers to fluctuate with changing air pressure as well as tempera­ture. The problem was solved when the choice of expanding substance shifted to alcohol enclosed in a sealed glass tube.

The first network of temperature observations was organised by Ferdinand II, Duke of Tuscany and a member of the powerful Medici family. In 1654, he ordered that a number of spirit-in-glass thermometers be distributed to various sites in Northern Italy, including Parma, Milan and Bologna. Measurements were taken almost every hour of the day for 16 years until the Duke’s Academy of Sciences was closed.

For comparative tempera­ture readings to have any meaning, thermometers have to be calibrated. For this you need a couple of fixed reference points. Histori­cally, the freezing point of water was quickly agreed upon as one point, but a variety of options were tried for the other, including the temperature of air in a deep cellar, the temperature of the human body and the boiling point of water.

In Holland, for a time, the melting point of butter was used. Nowadays the triple point of water (0.01°C—the temperature at which water exists simultaneously as solid, liquid and gas) is used, along with absolute zero (minus 273.15°C).

Aside from expansion, there are other physical responses that can be used to measure temperature. For example, the electrical resistance of a wire increases as its temperature goes up, and the colour of light emitted by a hot object will change according to its temperature. Also, the speed of sound through air or water changes as the tem­perature changes.

This latter phenomenon is the basis of a proposal to measure the temperature of deep water in the Pacific Ocean by setting off under­water explosions off the coast of North America and seeing how long it takes for the sound waves to reach the coast of New Zealand. (As the effect is fairly subtle, it is best measured over a long stretch of water, hence the need for the sound wave to traverse the entire Pacific Ocean.)

Repeated from time to time over the coming decades, this experiment would help to monitor the influence of climate change on the ocean.

The study of climate change has benefited greatly from improved knowledge of past temperatures gained using proxy measures such as variations in tree rings, pollen counts that show what plants used to grow where, and lake sediments that record the extent of runoff in spring thaws.

One of the most ingen­ious of proxy measures of temperature involves two isotopes of oxygen known as 0″ and O. Since 0″ is the heavier of the two—because of two extra neutrons in its nucleus—it is slightly harder to evaporate from the sea surface than 01‘. During the ice ages, large amounts of fresh water are tied up in the ice caps. Since this water has evaporated from the ocean, it is enriched in 0″. The ocean, in turn, is left enriched in 0″. The changing ratio of the two isotopes can be tracked by measuring their proportions in the shells of tiny dead marine animals buried in sea floor sediments. The ratios yield estimates of the changes in global average temperatures over the last million years.

The oxygen isotope ratio has also been measured in ice taken from cores drilled through the ice sheets of Greenland and Antarctica. As each year’s snow is compressed into ice, it forms a distinct layer, allowing individual years to be counted over tens of thou­sands of years.

More recently, cores have been drilled through ice sheets further away from the Poles, in places such as Tibet and South America. An ice core taken from a glacier near the top of a Bolivian volcano may take the prize for the most difficult temperature to determine, as the glacier was a long way from the road end and in atmosphere too thin for a helicopter to operate. Carrying the ice down by beast of burden would have taken too long, causing the ice to melt and isotope ratios to be disturbed. The solution? Fly the ice cores down to the freezers at the road-end using a hot air balloon, carried up the mountain in 14 backpacks and assembled on site. 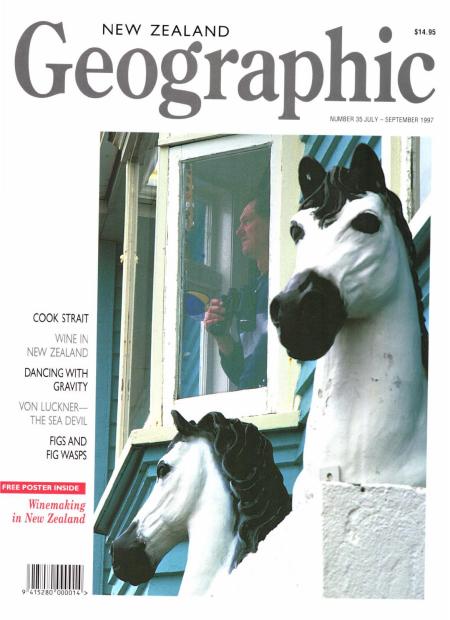