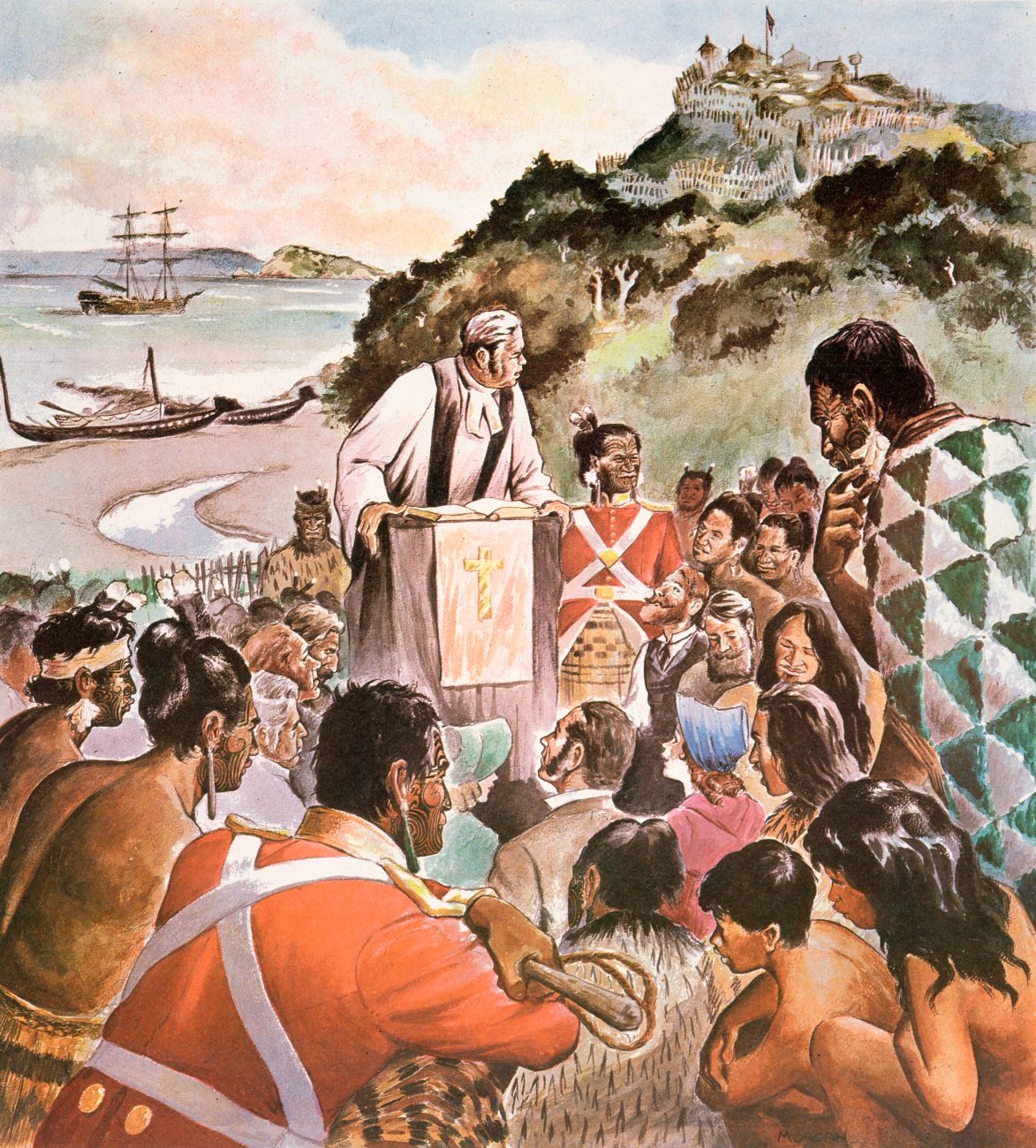 New Zealand’s first Christmas service took place on December 25, 1814, at Rangihoua in the Bay of Islands, a site which would become New Zealand’s first long-term Pakeha settle­ment. Anglican clergyman Samuel Marsden, fresh off the boat from Australia, preached from the second chapter of St Luke’s Gospel: “Behold, I bring you glad tidings of great joy.”

In Jack Morgan’s 1964 painting of the scene, a crowd gathers, transfixed, stroking moko’d chins and earnestly reflecting on Marsden’s words. Ruatara, one of the first Ngapuhi chiefs to become associated with the Europeans, stands on his left, translating to his fellows.

This first service became the first sermon of the first missionary effort to spread Christianity among Maori. As well as religion, Marsden also established a vineyard with some 100 grape varieties, introduced the first sheep, the first horse—the building blocks of what would be the country’s primary economy. But all is not as it seems.

While Marsden has traditionally been revered in New Zealand, he was “reviled in Australia’s colonial story”, according to revisionist historian Richard Quinn. While books such as A.H. Reed’s Samuel Marsden, Greatheart of Maoril and and A.T. Yarwood’s Samuel Marsden, The Great Survivor describe a fair though strident pioneer, his reputation across the Ditch was quite different. Marsden was the biggest convict slave owner in Australian history, and when appointed a New South Wales magistrate he rapidly earned the moniker “the flogging parson” on account of his judgements of “gross severity”, even by the standards of the day.

On one occasion, he sentenced a sus­pected Catholic rebel, 20-year-old Irish youth Paddy Galvin, to no fewer than 300 lashes with the cat o’nine tails—a whip of nine pieces of rope, each four foot long with iron weights on the ends. One eyewitness noted that “you could see his backbone between his shoulder blades”. Marsden sent young Galvin briefly to the hospital then on to labour at a pepper mill to prolong the ordeal. “One is entitled to wonder what kind of prayers Samuel Marsden offered up to the Lord after that day’s work,” recorded Bill Wannan, an Australian folklore expert.

Marsden never developed any compassion for the nomadic Australian Aborigines, but saw in Maori a people who might take to Christianity, and importantly a lucrative commercial opportunity that trading with Maori offered—all the “unholy profits unhindered by competition”, as Quinn frames it.

Likewise, Maori had their own agenda. Rua­tara himself never became a Christian, nor did many Maori convert for at least another 15 years. Many chiefs were more interested in a relationship with Marsden for the iron and muskets at his disposal hardware for a burgeoning inter-tribal arms race.

According to historian James Belich, upon helping Marsden to set up the first Christian mission, Ruatara “secured a monopoly over the first permanent European settlement in New Zealand, a goose that would reliably lay eggs of iron, if not gold”.

In this way, Marsden’s first Christmas also precipitated the passage of guns and distillation equipment into the hands of the Maori. As Yarwood summarises, “He had a sense of destiny and divine purpose which not only sustained him in physical danger and political controversy but drove him on to the zealots great error of believing that ends justified the means.”