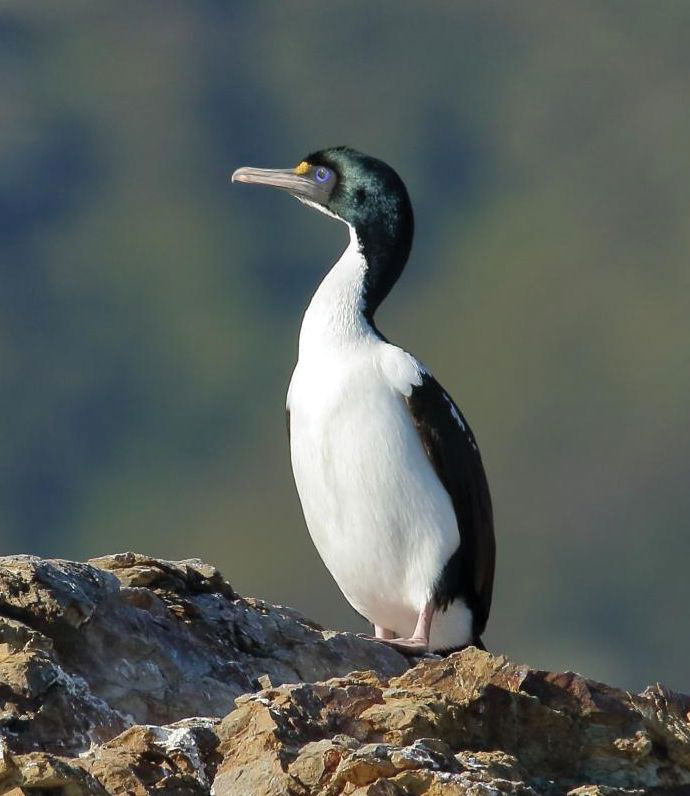 Reconstructing the family tree of New Zealand’s blue-eyed shags has enabled scientists to unravel their past—and may help determine their future.

The blue-eyed shag family includes bird species from all around the country: the rare king shag from the Marlborough Sounds, the Otago shag, the Foveaux shag, the extinct (but recently discovered) kōhatu shag from Northland, and species on the Chatham, Auckland, Campbell and Bounty islands, plus more-distant relatives on other subantarctic islands and in South America.

Nic Rawlence from the University of Otago set out to track the evolution of the entire group, and his team’s genetic research revealed the birds evolved in South America. This is unusual for New Zealand birds, which most often arrive from Australia on the westerly winds. Blue-eyed shags were probably blown off course into the Southern Ocean and island-hopped around the subantarctic before arriving here around 2.5 million years ago and rapidly diversifying.

That there are so many different species here is because of a paradoxical personality trait of blue-eyed shags. Though shags are obviously prone to accidental oceanic travel, once they find somewhere they like, they don’t stray far from home. That meant each small population was isolated from the rest and evolved independently.

Then the ice ages struck, and Antarctic sea ice expanded all the way up to the more southerly subantarctic islands, spelling the end for the blue-eyed shags living there (the birds feed in shallow waters near their colonies, and when those froze over, they would have starved). When the ice retreated during a warmer period, blue-eyed shags recolonised the Southern Ocean from South America—but that later wave of migrants couldn’t get a foothold in New Zealand, as shags on the mainland had survived. “There were already blue-eyed shags that were happy, that were filling the job vacancy for blue-eyed shag,” says Rawlence.

Genetic evidence confirms what biologists already knew about the family: “They are very, very prone to disturbance,” says Rawlence. “Whether that is human disturbance, polluting the oceans, or overfishing.”

That makes them sentinels for the health of the Southern Ocean. “Working out how they evolved and how they’ve responded to past climate change can help us think about how they will respond into the future.”