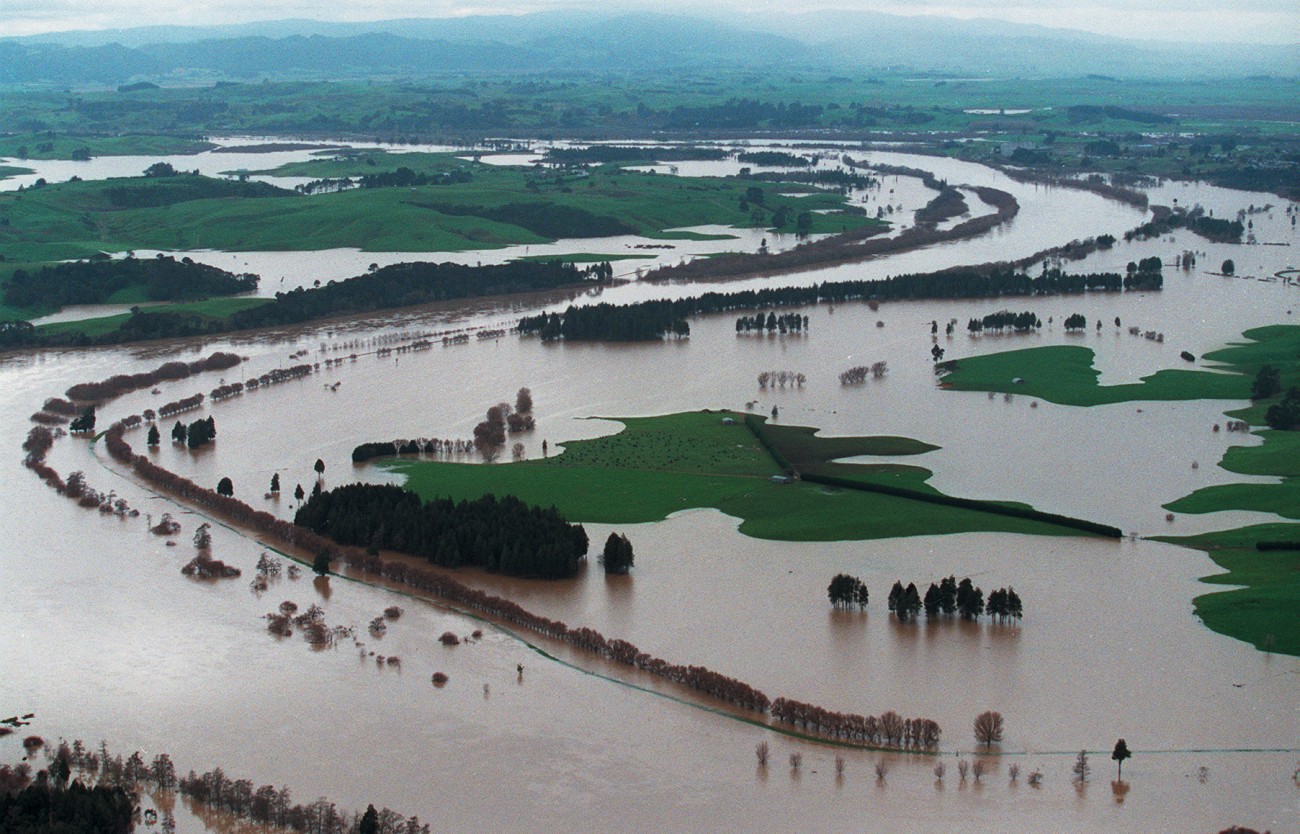 In July 1998, after a period of heavy rain, the Waikato River spilled over its banks, inundating hundreds of hectares of farmland, flooding parts of Huntly and crossing State Highway 1 at Rangiriri. In places the floodwaters took weeks to drain away, and silt-covered farmland had to be replanted in grass.

In Huntly, seven families were evacuated from their homes, and the college had to be relocated to temporary premises in the old Hopuhopu army camp 7 km out of town.

Although the rainfall and river flows made this one of the worst Waikato floods of the century, the damage was not as serious as that caused by the flood of 1958 that covered thousands of hectares of farmland, drowned hundreds of sheep and flooded hundreds of houses in Otorohanga, Te Kuiti and Huntly.

Flood abatement works put in place after the 1958 event made the difference. They include 215 km of stopbanks, 342 km of channel works, 246 flood­gates and 62 pumping stations, costing over $135 million. Part of the system is a spillway over State High­way 1 at Rangiriri, which is designed to channel water to Lake Waikare and, if necessary, beyond to the Whangamarino Swamp, from where it can gradually be released later.

The eight hydroelectric dams on the Waikato also allow the floodwater coming down the river to be control­led. Indeed, when the Waipa River was running at its highest, the dams were used to control flows on the Waikato to prevent the two rivers peaking at the same time where they meet at Ngaruawahia.

Eventually, though, there was so much rain that Lake Taupo rose to dangerous levels and threatened to flood surrounding settle­ments. Wind-driven waves also caused damage along the shores of the lake. With water pouring into the lake from its tributaries at a rate of 250 cubic metres a second, the control gates had to be opened to allow the maximum flow of 310 cubic metres a second out of the lake into the Waikato River.

The flooding in the Waikato was not caused by a single rainstorm but by a series of five smaller storms over several weeks. During June and July a number of depressions deepened over the Tasman Sea, bringing warm, moist air down to New Zealand from the north-west. Together, these repeat events brought the country the warmest July conditions on record, with much of the North Island ending up 2 to 3°C above average. Rainfall was also 200 to 300 per cent higher than normal over central and northern parts of the North Island.

The unseasonal warmth was responsible for a lack of snow and a poor ski season. Meanwhile, on the other side of the Tasman, the deepen­ing depressions brought repeated cold southerlies and record snowfalls to the state of Victoria.

One reason for these repeat events is that small-scale weather systems tend to move faster than large-scale ones. For example, fronts in the belt of westerly winds south of Australia and New Zealand often move towards the east faster than the anticyclones that also occur in these latitudes. So, while an anticyclone is moving sedately across the south Tasman Sea towards New Zealand at about 20 kph, there is usually enough time for several fronts to rush up its eastern flank at about 70 kph, sweeping over the country with repeated bursts of cold, showery weather before the anticyclone reaches New Zealand with its more settled weather.

When our weather is under the influence of El Nino or La Nina, repeat events are also the order of the day. New Zealand gets more south-westerlies and cold fronts during an El Nino and more north-easterlies and intrusions of warm tropical air during a La Nina. El Nifios and La Ninas are themselves two extremes of the Southern Oscillationan irregular cycle that generally repeats every three to five years. But rhythms with a longer time scale have also been detected in the behaviour of the Southern Oscillation.

Since 1977, the Pacific has experienced many El Ninos—including the two strongest ones of the past century—and only a few La Ninas, most of them weak.

According to scientists Brett Mullan and Jim Salinger of the National Institute for Water and Atmospheric Research (NIVVA), this dominance of El Nino has contributed to a shift in New Zealand’s climate. In a study of climate records from 1930 to 1997 both in New Zealand and found a number of signifi­cant changes since 1977. In the north and east of the North Island, for example, the weather has been 10 per cent drier and 5 per cent sunnier during the past 20 years, with major droughts occurring more frequently than before.

By contrast, the west and south of the South Island has become 10 per cent wetter and 5 per cent cloudier, and damaging floods have become more frequent. Also, fewer frosts are occurring nationwide, because over­night temperatures have been rising.

Meanwhile, in the South Pacific, the belt of thunder­storms between Fiji, Samoa and Tonga known as the South Pacific Convergence Zone has shifted around 150 km eastward. This elongated belt of storms is responsible for much of the rainfall in the South Pacific, and gives birth to the region’s tropical cyclones, so its movement has had a major impact. Fiji, Tonga, Vanuatu and New Caledonia have become drier while the northern Cook Islands, Tokelau and parts of French Polynesia have become substantially wetter.

Most of these changes in the climate are consistent with El Nino conditions, but not the warming over New Zealand, which usually experiences cooler weather during El Nifios. Conse­quently, there seem to be other factors influencing the climate as well.

There are signs this regime may come to an end in the near future. At the moment, the Pacific is coming under the influence of a La Nina phase of the Southern Oscillation. Sea-surface temperatures in the central tropical Pacific have fallen several degrees below average, the tropical easterly trade winds have strength­ened and the difference in atmospheric pressure across the Pacific from Tahiti to Darwin has become posi­tive all classic signs of La Nina. Typical La Nina weather has also begun, with heavy rain falling at the Asian end of the Pacific. Bangladesh, for example, has had one of its worst floods in 50 years, while flooding has also occurred in parts of Indonesia that were experi­encing fire and drought a year ago.

This La Nina is expected to continue through the summer, bringing above-average rainfall to those areas such as the north and east of the North Island that have been experiencing droughts under the en­hanced El Nino regime.

In North America, researchers have detected long-term swings in the behaviour of their flora and fauna corresponding to the multi-decade changes in El Nino behaviour. Among the variables showing the swing have been the salmon catch in Alaska, the number of Canada goose nests on the

Colombia River, the salinity of Puget Sound, the density of chlorophyll-bearing phytoplankton in the central North Pacific and the width of tree rings on the North American west coast.

The tree rings, especially, have been useful, as they offer a window onto the past. Studies of 500 years of growth rings from western juniper trees growing in Oregon have shown regular cycles of enhanced growth, with changes occurring about every 20 years (although there was one spell that lasted for 34 years).

Our current run of enhanced El Nifios has lasted 31 years, and so is close to being the longest in the past half-millennium. Consequently, some North American scientists are warning that we are on the verge of a change back to the more balanced sequence of El Ninos and La Ninas that we had before 1977.

And what might be the cause of these swings? High on the list of suspects is the ocean circulation. In a paper published in the journal Nature early this year, a team of US oceanographers presented evidence that an anomalously warm patch of subsurface water has been rotating clockwise around the North Pacific ocean in the subtropical gyre.

This subsurface warm anomaly formed in middle latitudes in the early 1970s from subducted surface waters. Sinking to depths of around 250 metres the warm water was carried towards the tropics where upwelling brought it to the surface again, enabling it to play a role in modifying El Nino during the 1980s.

But this feature alone cannot explain all the quirks of El Nino, and we still have much to learn about the mechanisms that influence our climate.