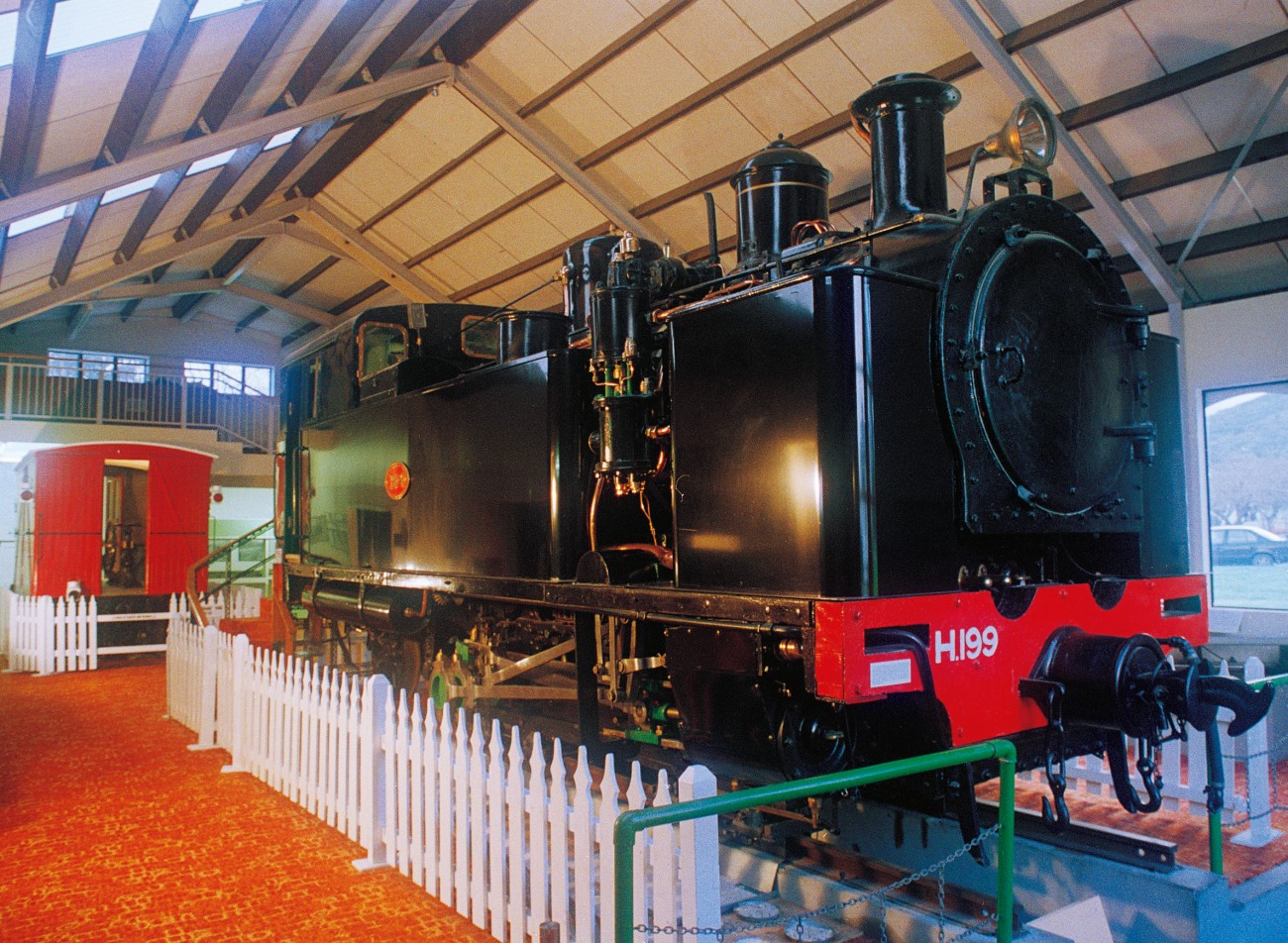 Catching the train seemed the proper mode of travel for my first visit to Featherston’s Fell Locomotive Museum. The museum houses the only remaining Fell locomotive in the world. As the early-morning pas­senger train rumbled through the 8.8 km tunnel that pierces the heart of the Rimutaka Range, I realised that this very tunnel was what made New Zealand’s Fell locomotives redun­dant 50 years ago.

The Wairarapa is the nearest large swathe of arable land to Wellington, so when railways were being strung across the country in the late 19th century, it was natural to try to con­nect Upper Hutt with Featherston. However, there was a problem: the steep Rimutaka Range which reared up between the two towns.

While it was possible to find a route across, the grade on the east­ern side (1 in 15) was far too steep for normal locomotives, which can only operate on gradients gentler than 1 in 35. The solution was to use special machines designed specifi­cally to operate on steep tracks—Fell locomotives. In addition to normal wheels, these had a set of smooth, horizontal, powered wheels that gripped a raised centre rail from each side. John Barraclough Fell (1815–1902) devised the system for a railway over the Mont Cenis Pass, between Italy and France. Fell was the first—but far from the last—to design a locomotive that could nego­tiate steep grades.

When the line between Wellington and the Wairarapa opened in 1878, it included the Rimutaka Incline, a 4.8 km section of track that climbed 265 m up the Wairarapa side of the range. It was New Zea­land’s steepest section of main-line railway.

In fact, by the time Fell’s locomo­tives started service on the Rimutaka Incline in 1878, the technology be­hind his invention had already fallen from favour in engineering circles. Mechanical problems had plagued the Mont Cenis system, where the line had remained in place for only a few years before being replaced by a tunnel. There had also been difficul­ties with a Fell system built in Brazil in 1870.

The Rimutaka Incline was the third and last installation of Fell’s centre-rail patent system. Had the Fell locomotives run on the Incline for no more than a few years, they would probably have become merely a footnote in train lore, but Kiwi ingenuity solved the mechani­cal problems, and necessity—the mother of all invention—kept the locomotives working and trains run­ning for 77 years. In total, the six Fell locomotives that ran on the Incline logged more than 4,445,000 km.

On the day I visited the museum there were several tour buses parked outside. Inside, museum volunteers were engaged in earnest conversa­tions with small groups of visitors. A number of tourists stood in deep contemplation around restored Fell locomotive H199 and renovated Fell brake-van F210. There was a feeling of awe in the room, not only for the locomotive itself, but also for those who keep this intriguing piece of railway history alive. People come to the museum from all over the world to learn more about the engineering achievement it celebrates.

A 20-minute video, photographs, memorabilia and several painstak­ingly made models give visitors an overview of life on the Rimutaka Incline. The highlight of the museum, though, is indisputably the 130-year­old H199, which took 9000 hours of volunteer labour over an eight-year period (1981–1989) to restore.

“The other five Fell locomotives that worked the Rimutaka Incline ended up as scrap metal in 1957, making H199 the last engine of its type in the world. Amazingly, this important piece of history sat in a Featherston park for more than 20 years, where it deteriorated from exposure to the elements and vandalism,” explains Graeme Jupp, volunteer guide and member of the Friends of the Fell Society. “A group of dedicated enthusiasts, under the supervision of engineer Graham Murrell and led by Clifford Lea, rebuilt H199. Their dedication over eight years gave New Zealand a beautifully restored transport icon.”

Graham Murrell was a Fell fitter on the line from 1940 to 1948. Dur­ing that time, he lived at the small railway settlement of Cross Creek, one of two communities established solely to service the Rimutaka In­cline. Like many others who worked on the Fell locomotives, Graham retains a keen interest in them and has devoted many hours to helping the public understand the distinctive attributes of the Fell system.

“Living at Cross Creek was a relatively isolated existence, but for many it also seems that it was a very positive experience. There is a loyalty to the Fell locomotives that is quite remarkable,” adds Graeme Jupp.

October 29, 2005, marks the 50th anniversary of when engine driver Dan Kennelly took H199 on its last journey up the Incline. Five days later the tunnel that now connects the Hutt Valley with Wairarapa was opened. Museum volunteers and staff, Fell locomotive enthusiasts and the townspeople of Featherston and Wairarapa are looking forward to a celebration this October to com­memorate the occasion.

As Ron Grant, a retired civil engi­neer and rail historian recalls: “The incredible sound, soot and sight of a Fell engine working ‘all out’, especially when experienced from the open platform on the carriage immediately ahead of an engine, is not easily forgotten”.

For those of us who weren’t able to witness a Fell locomotive in ac­tion, the museum provides the best alternative. If you have the time, be sure also to visit the Rimutaka Rail Trail, which follows the old railway route over the Rimutaka Range. It is popular with mountain bikers and trampers and maintained by Greater Wellington Regional Council and the Department of Conservation (DOC). There is interest in re-establishing some sort of heritage railway over the old route.

Operating speeds on the Rimu­taka Incline averaged about 6.4 kph on the ascent and 16 kph on the descent. On a good day, the climb between the railway settlements of Cross Creek and Summit took 45–50 minutes. It was not unknown for pas­sengers to get off the train and race it to the top on foot.

The brake blocks on the Fell loco­motives and brake-vans were made of soft cast iron and usually lasted only one round trip. They would wear down from 152 mm thick to 51 mm. Soft cast iron was used to minimise wear on the centre rail.