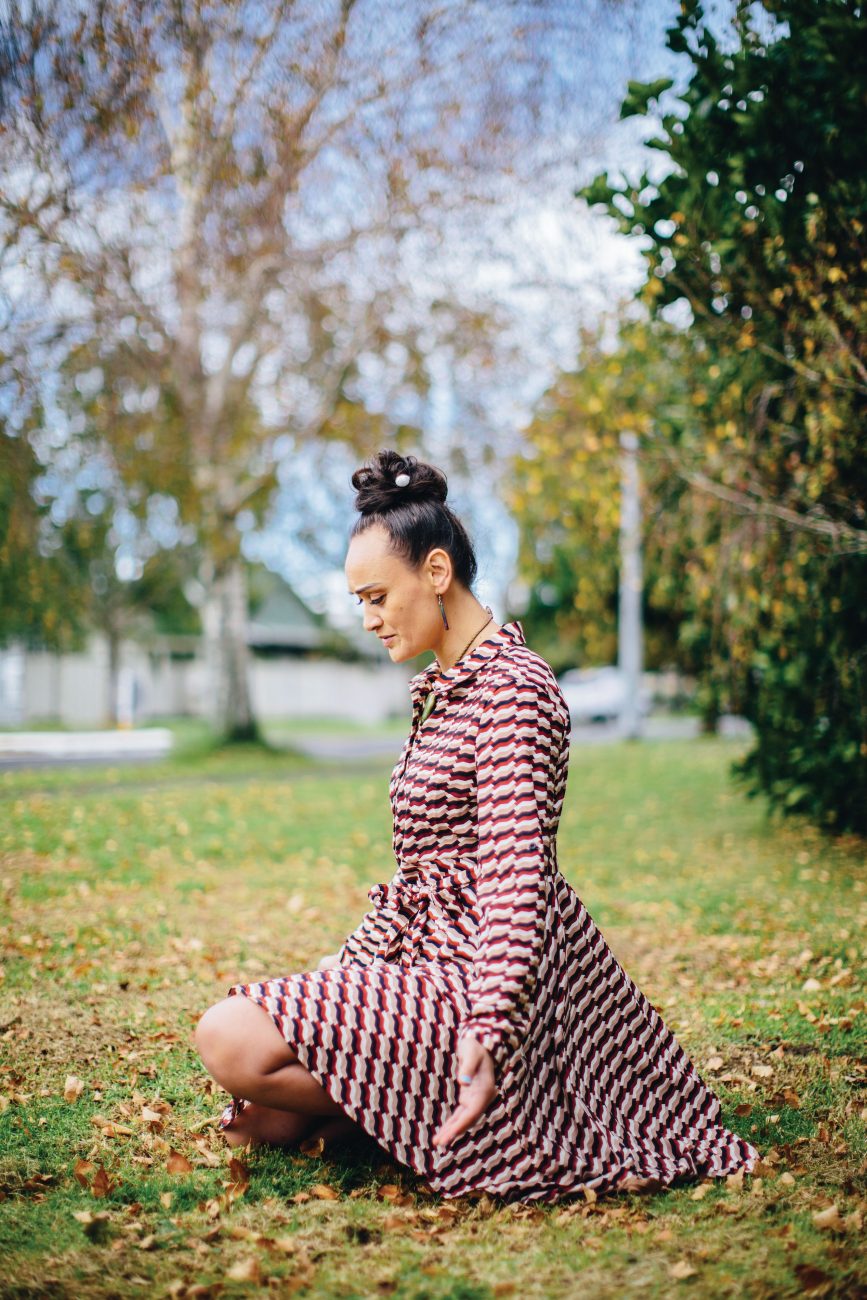 “My dad moved from Ōpōtiki in his 20s and my mum grew up on Queen Street, so right in the centre of Tāmaki Makaurau. My dad was quite heavily involved in Black Power. The gang built us a brand-new complex of homes, and they all looked like wharenui, and within each of those homes were tamariki. All of us were roughly around the same age. We were recognised as the village kids, and there was a bit of prejudice around that. But I guess what it made us do is stay tight. And when we got back into the village at the end of the school day, we were running free, playing on our bikes, playing elastics, playing hide-and-go-seek, hopping in and out of each other’s homes.

My dad had tattoos all over his face. And I say tattoos, not moko. Walking with my dad in public drew so much attention. I found myself a lot of the time protecting my dad. Although he had all these tattoos all over, the minute you would hear his voice—it’s just this beautiful, soft voice that doesn’t match. I wanted people to see who I knew my dad to be. A few years forward, he handed his patch in. He went back to kura, he learnt te reo Māori, he became a Māori teacher. Today, my dad doesn’t have any tattoos on his face. He went through the whole process of lasering them all out. Well, I say that he wears his own moko now, on the inside. I just admire him so much.

At primary school, Pounamu Performing Arts used to tour all the schools and do kapa haka brackets, and I knew I was related to them. They were like my superheroes, and all I wanted to do was be a kapa haka performer.

When I finished school, I spent a year travelling, then I spent a year at Pounamu Performing Arts under the tutelage of nan and koro and the entire Wehi whānau. My aunties and uncles, they gave me opportunities to stand up every day and sing.

In 2003, I was named in Te Waka Huia. Oh, it was a dream come true. I was on the end of the second row. I performed in the curtain of the Town Hall for like, 80 per cent of the show. I couldn’t have been more relieved and proud. I didn’t even care if I was in the curtain and no one could see me, I still made it to Te Waka Huia.

It demands the best of you. Every single campaign that I’ve entered has always drawn me outside of my comfort zone. It doesn’t matter how many times or how old I get, every time I’m guaranteed to peel another layer of who I am.

Aside from the privileges of travelling the world is having the honour of being part of an extended whānau who hold me well. I speak about the Te Waka Huia aunties—Auntie Annette, Auntie Lauren—these women who have played such an integral role in my life teaching me how to look after people.

Later, my world opened to the world of dance, of theatre. I created a first piece of work called An Old Friend in a New Time, and that was about being a kaihaka [performer] in this contemporary world. Shortly after, we performed a work called Arohanui, which combined I think it was 20 kaihaka, through the country. Here were all these kaihaka from rare and respected teams coming together to perform a haka theatre show.

Shortly after that, Hawaiki Tū was born. It became a place for us to continue to create and develop our ideas of haka theatre, merging the principles that are underpinned in haka—you know, our waiata, our taonga tuku iho, our discipline of martial arts, te reo Māori—with the components of theatre to tell our stories. We’re at a place now where we are looking to premiere Taurite, which is a haka dance piece of work that was started at the beginning of 2020.

My expression is through dance—things that I can’t say in words. Performing is expressing what’s happening in my life as a way of finding an understanding and an ultimate truth of things.

I think about who I am and the programmes that I’m running and the academy that I have and the people that are looking to me for the next direction. I’m working with Atamira Dance Company at the moment. One of the components that has been interesting for me is to look at tupuna and what tupuna means. And so one of the whakaaro [ideas] is that tupuna wāhine have seven generations of DNA within us. Inside of me, I think of my nanny Rawini, Te Rangi Takatu from Te Whakatohea, prolific composer of haka. I think of these women. And so if I’m carrying seven generations of all of them, then I think about me being the tupuna of the next seven generations to come. What I do is in the knowledge that the next seven generations are going to have a part of me.”