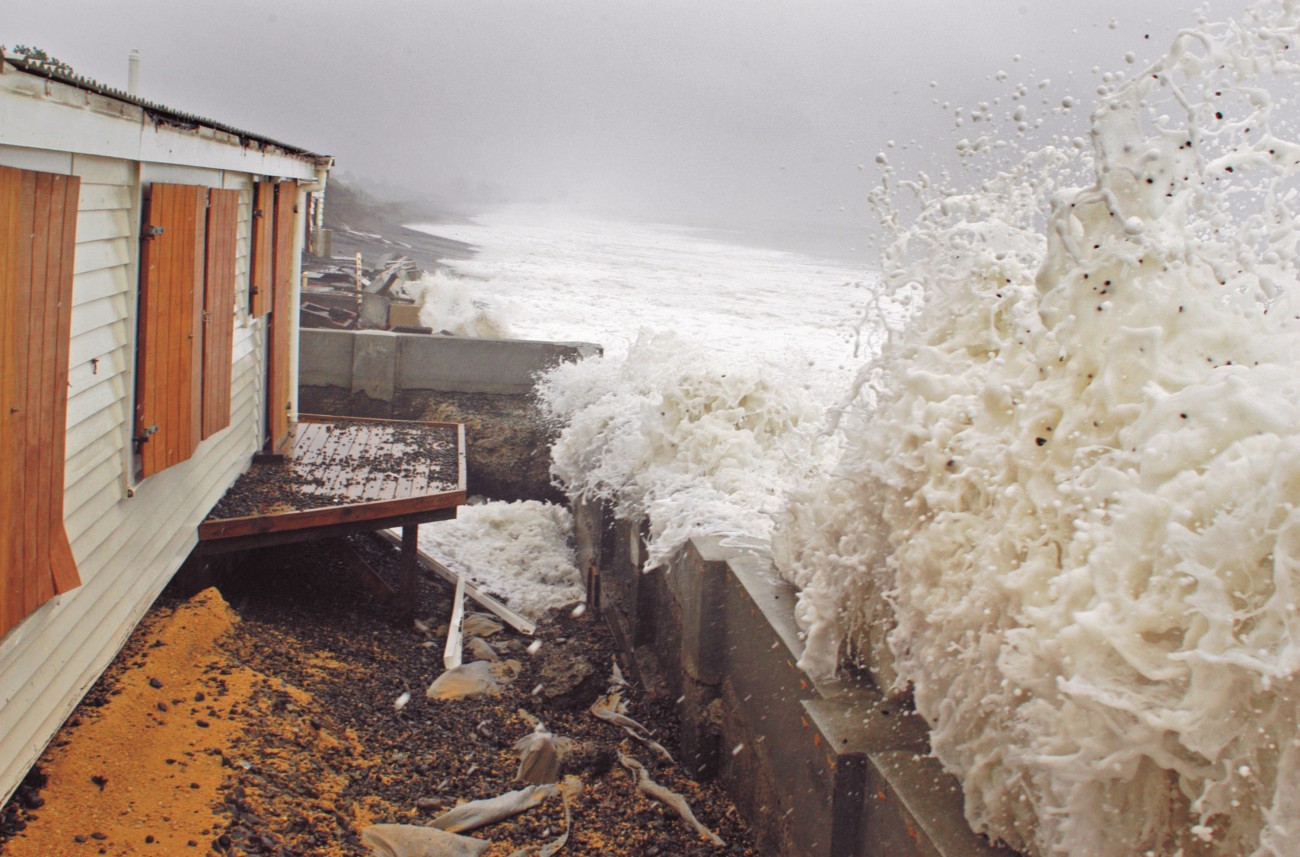 With our stone canoe anchored in the zone of the persistent mid-latitude westerly winds, we New Zealanders can be surprised and discomfited by the sort of weather a good period of easterlies drags in. Fog, for example, is not common in Wellington, yet at the beginning of February there were five days of low cloud and fog rolling off the sea in a southerly breeze. Wellington airport was closed for long periods causing major disruptions to air travel.

In places known for fog, such as Christchurch and Hamilton, fog is least likely to occur in summer, and if it does form then it is usually only for an hour or two around dawn.

In winter, of course, fog in these places can last ten or twelve hours. Known as radiation fog, it typically forms with clear skies and light winds.

During a night without cloud the ground radiates heat away to space—the longer the night, the greater the heat loss. As the ground becomes cold, it cools the air in contact with it. If the wind is light, the cooling is confined to the lowest layer of the atmosphere where the temperature can drop by 5 or 10 degrees. Usually there is enough moisture in the air that this amount of cooling will bring the relative humidity up to 100 per cent and some of the water vapour will begin condensing, forming the tiny liquid droplets that fog and clouds are made of.

By contrast, the fog that affected Wellington in February was caused by a different mechanism. Known as advection fog, it formed when warm, moist air from the subtropics moved over a progressively cooler sea surface during its journey of several days towards New Zealand. The air was initially transported out of the tropics by north-east winds on the flank of a large slow-mov­ing anticyclone. The winds turned easterly as they approached central New Zealand, then finally turned southerly just before the fog swept in to Wellington Airport. Because the cooling of the air is caused by the contrast between warm sea surface temperatures in the sub-tropics and the cool sea surface temperatures found around Wellington, this sort of fog can strike at any time of year, day or night, and last for as long as the wind is following the same path.

Another of the easterly’s un­welcome gifts is torrential rain. Although often thought of as dry sunny areas, the eastern provinces from Gisborne down to Wairarapa experience, on occasion, some of the heaviest rainstorms that occur in New Zealand. Gisborne’s flooding during Cyclone Bola in March 1988 is one example and the February floods of 2004 another.

At the end of March this year parts of Wairarapa had their heavi­est rain in decades. Some places recorded around 200 mm in 24 hours, but the worst blow was struck by intense microbursts lasting an hour or less. One of these struck Castlepoint where the MetService rain gauge received 57 mm in just one hour. A large section of road was washed away and a number of beachfront properties were engulfed by floodwater. One house, sold two days before for $690,000 was left with silt and sand up to the top of its cupboards.

Some isolated rural communities were cut off for days by slips and washouts, and supplies of food and medicine had to be airlifted into them. One farmer near Tora, who had never seen rain like this in the twenty-four years he had lived there, had five cows swept out to sea, a huge amount of fencing destroyed and paddocks left covered in mud.

Worse hit was the Ngahape valley east of Masterton. Debris left from forest harvesting clogged and dammed the Kaiwhata Stream. When the water burst free, thou­sands of tons of logs were driven over farmland, hurling through the sides of buildings, destroying equip­ment and killing farm stock. Total damage across Wairarapa is expect­ed to be many millions of dollars.

But easterly storms do not just drop water out of the sky: they can also drive the sea up onto the land. At Haumoana, near Hastings, heavy six metre swells riding on top of the high tide forced the evacuation of six houses on Thursday, March 17. One wave was seen to wash completely over a house. Walls residents hadbuilt to protect themselves were re­duced to rubble and shingle washed right across the road. Four Norfolk pines 15 m tall were uprooted and 30 m of lawn in front of one proper­ty turned into sandy beach. A heavy swell warning had been issued and no lives were lost, although a chained dog had to be rescued after the waves washed over it, and a kitten survived being washed out to  sea twice.

Known as storm surge, or sea-flooding, this sort of maritime invasion is caused by a number of factors. The low atmospheric pres­sure near the depression centre acts to lift the sea-level in a similar way that liquid can be drawn up a straw by sucking. Also, strong winds blow­ing towards the land cause breaking waves to pile up water in shallow coastal areas. When all this happens during high tide, buildings and farm­land along the coast are at risk.

Gradually, the effects of sea-level rise induced by global warming will increase the risk of coastal dam­age. Environment Waikato estimates around a billion dollars worth of property in the Coromandel alone is likely to be affected by coastal erosion in the next hundred years. Sea level rise is caused partly by expansion of the surface layer of the sea caused by the slow rise in sea temperatures, and partly by melting of land-based ice, such as glaciers. In most parts of the world glaciers are in rapid retreat.

The Tasman Glacier, for example, has suffered a series of collapses re­cently, releasing hundreds of blocks of ice, some as large as Dunedin Railway Station, into Lake Tasman. Since its last advance in 1890, the snout of the glacier has not only retreated, but the top surface has lowered by around 100 m.

In some parts of the world, such as California, Oregon, Washington State, and northern Chile, melting snow and glaciers in the mountains provide the main or only source of water in the summer half of the year. As the snow and ice retreat, these places are headed for crisis.

And in New Zealand we may have to learn to become comfortable with more easterlies than we have been accustomed to. During the period from the late 1970s through to about 1999, the Southern Oscilla­tion was in a mode where El Niños were much more common than La Niñas. Now climatologists think we have shifted back to a mode where La Niñas will be as common as El Niños, or even more common, for the next couple of decades.

Although the recent easterly storms managed to arrive without the help of a La Niña, easterly storms tend to be more frequent during a La Niña event. Worse than that, the water in the Pacific Ocean tends to slop back to this side of the Pacific Basin during a La Niña, raising the sea-level an extra twenty to thirty centimeters at the western boundary. Watch out for those high tides!