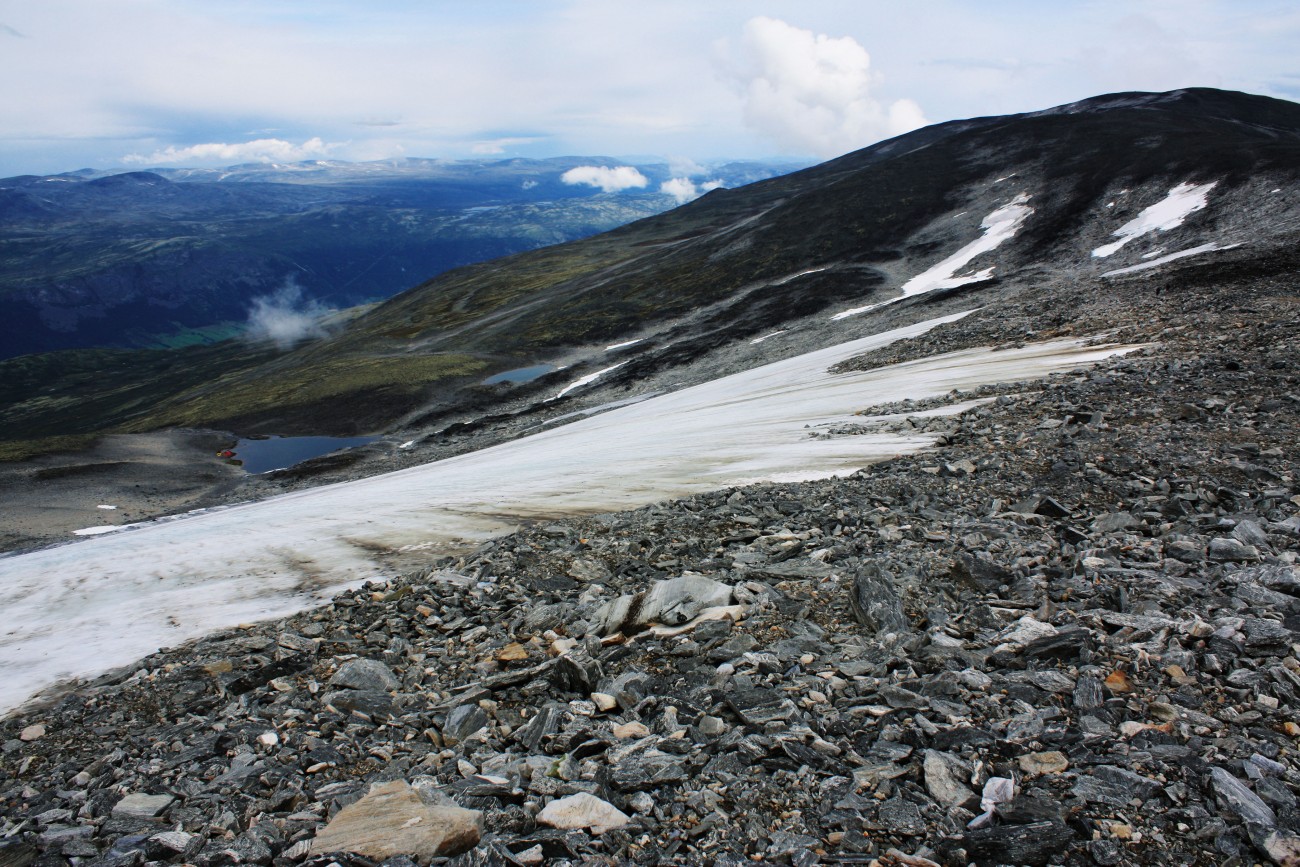 When Glaciers flow down mountain valleys, they grind up the rocks and whatever lies in their path. But ice fields on flat ridge tops can stay still for thousands of years, preserving whatever lies beneath them.

Now, under the influence of climate change, ice fields all over the world are melting and yielding artefacts and the remains of plants hidden for millennia beneath the ice.

After a particularly warm summer in 2006, two hikers found a leather shoe at the edge of the ice on the Lendbreen ice field, 2000 metres up in the mountains of southern Norway. Curators at the Norwegian Mountain Museum in the nearby town of Lom dated the shoe to 3400 years ago.

It was fortunate the shoe was found so soon after the ice melted—left in the sun, it would have dried out, crumbled to dust and blown away in a matter of weeks. Alerted by the find, archaeologists mounted a rescue expedition. They have since found 1600 other artefacts in the region’s ice fields, including leather items, textiles and wooden hunting equipment such as bows and arrows.

On the last trip of the 2011 season, searching in thick fog, they came across a well-preserved woollen tunic. The fog then lifted, revealing hundreds of artefacts lying nearby. The tunic, of a type known as a kyrtel, was dated to 1700 years old. Examination by electron microscope showed that it was made of wool from both lambs and adult sheep.

An old track over the mountains has also been found, marked by cairns and vertical stones. Copious amounts of sheep and horse dung also melted out of the ice and are being dated by biologists. However, the melting ice tends to pile up artefacts of different ages one upon another, rather than sort them in strata as occurs with archaeological remains in soil.

Ice patches in the Rocky Mountains in the United States have also been yielding treasures. A 10,000-year-old atlatl dart was found near Yellowstone National Park in 2010. One metre long, it would have been launched by a spear thrower and carried personal markings of the hunter.

Normally, organic material such as wood does not survive, so the ice patches have suddenly come into focus as one-off oppor­tunities for archaeologists fast enough to swoop before the artefacts decay.

In Canada, one scientist used satellite photos to survey vast areas of the Mackenzie Mountains for likely sites to explore. Scraping together funds for a four-hour helicopter flight in 2005, he managed to visit a couple of ice patches and found an ancient willow bow. Over the next four years, he managed to visit eight other ice patches, finding throwing tools from 2400 years ago, a thousand-year-old ground squirrel snare, and more bows and arrows. Animal dung from these sites is being studied for plant remains, insect parts, pollen and parasites. Traces of DNA will be used to track lineage and migration patterns of caribou.

One reason the ice patches yield so much hunting paraphernalia is that the caribou once congregated on the patches, seeking relief from the hordes of biting insects that wouldn’t fly through the colder air above the ice.

Back in Europe, the Italian Alps have also been releasing history from the melting ice. Most famously, the body of the 5300-year‑old ‘Ice-Man’ was found high up on the border between Austria and Italy in 1991. ‘Otzi’ had a wonderful array of hunting gear and clothing with him, giving a unique insight into his time. He was thought to have died from exposure, but closer examination of an x-ray revealed an arrowhead embedded in his back. Traces of blood found on one of his own arrowheads revealed DNA from two different people—evidence of raiding and pursuit.

Relics of a more recent conflict have also been emerging. During World War I, the Italian and Austrian armies fought  at altitudes of more than 3000 metres, sometimes scaling vertical rock faces to do so. Both sides recruited local  alpine experts—some of whom were related to each other and ended up on opposite sides. One tactic was to start avalanches by shelling slopes above enemy positions. One mountain had seven metres knocked off its top by artillery fire. More than 80 bodies have emerged from the ice over recent decades, along with much equipment. A heat wave in September 2012 revealed more than 200 artillery shells spread out over an area no larger than a football field.

These human relics suggest conditions are now warmer than we have experienced for 5000 years or so, but some of the plant remains take us back much further.

A paper published last year in Geophysical Research Letters, by Gifford Miller from the Institute of Arctic and Alpine Research at the University of Colorado and associates, examined the remains of moss from under melting ice fields high on Canada’s Baffin Island. Moss from some of the ice patches was carbon-dated to between 5000 and 10,000 years ago. Known as the Holocene maximum, this time had been regarded as the warmest since the Earth emerged from the last glacial maximum.

During the Holocene maximum, the Earth was closest to the sun in the northern hemisphere summer and the sun’s radiation was some nine per cent more intense than it is today.

However, other ice patches slightly higher up the ridge on Baffin Island yielded moss that was older than the limits of carbon dating—about 47,000 years. Examining the Greenland ice cores shows that the world was a lot colder then, so it’s likely the last time this moss saw sunlight was the previous warm inter-glacial period some 120,000 years ago.