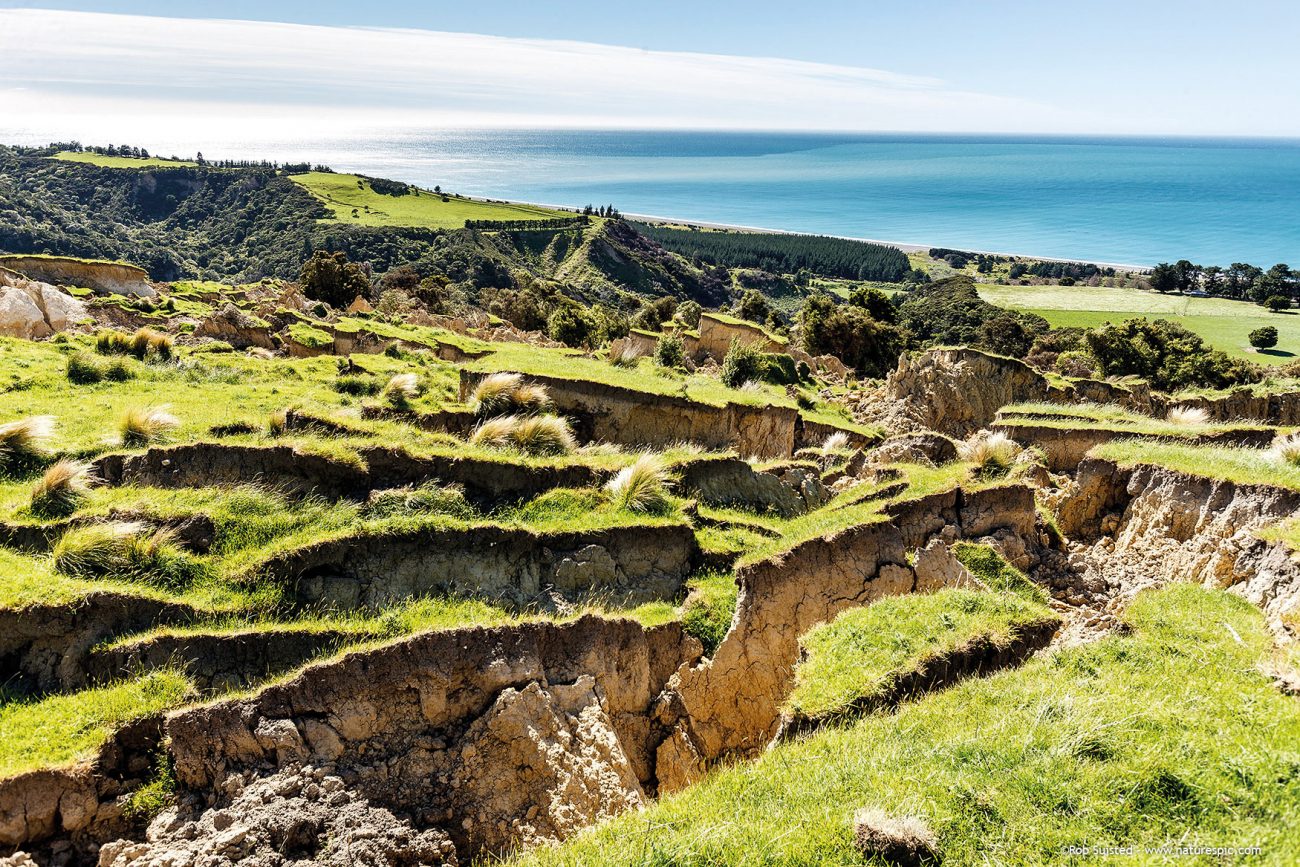 On November 14, two minutes after midnight, Scott Waterford had just gone to bed when the Kaikōura earthquake shook him out of it.

Still in his undies, Waterford took shelter in a doorway. Then, as the shuddering intensified, he jumped off the veranda and ran into the paddock.

“All I remember is the incredible noise, and because of the full moon I could see everything twisting and bending.”

He saw trees lean over then stand back up, and power lines spark as they were ripped from his house.

A minute or so after the shaking started, the ground split open.

“I was standing there watching my house and trying not to fall over, and suddenly my right leg went up and my left leg went down. I was still swearing quite a lot.”

Waterford was literally astride the Kekerengu Fault as it tore towards the sea.

That’s when he started running. He sprinted across the paddocks to his boss’s house, leaping over a few fences on the way. Later, he discovered the fault had picked his house up off its foundations and shunted it 10 metres away.

Scientists knew about this ‘lightning and thunder’ effect in theory, but only a couple of people have experienced it in person: first the shaking, then the land breaking.

“The shaking moves faster than the fault unzips,” says Russ van Dissen, a GNS Science earthquake geologist who is an expert on the Kekerengu Fault. “Through instruments we know that this happens, that they travel at different speeds—but to have a person right at that place and see it with their own eyes is amazing.”

It’s one of many discoveries made in the wake of the quake:

At least 21 faults ruptured across 160 kilometres, seismic energy leaping between them in unexpected ways. Scientists believed a fault could set off a neighbouring fault only if they were less than about six kilometres apart, but the Kaikōura earthquake jumped across faults 15-20 kilometres apart. Moreover, scientists didn’t think an earthquake with an epicentre so far inland could cause a tsunami. Yet the faults triggered the most significant local-source tsunami since 1947. While its effects were dampened by the low tide and coastal uplift, tsunami-wave evidence was found along 200 kilometres of coastline.

The plate boundary may have ruptured during the quake—but this is still in question. About 20 kilometres beneath Kaikōura, the Australian tectonic plate is crushing the Pacific plate beneath it. The plates were considered to be stuck, locked together underneath Marlborough.

But the area of uplift and subsidence around Kaikōura is too great to have been caused by any of the surface faults, or even a combination of them, says Nicola Litchfield, lead geologist at GNS Science. Instead, the evidence points to slippage of the plates.

“Then the next big question is—can that rupture in a big earthquake on its own?”

In the Kaikōura Canyon, the 1200-metre-deep chasm that drops from south of the Kaikōura Peninsula into the Hikurangi Trough, the earthquake’s shaking unleashed around 50-60 metres of sediment. It roared down the chasm, gathering mud, then scoured the sea floor to a depth of 20-30 metres.

“It’s hard to comprehend how big the scale of the thing would have been—hundreds of metres of sand and mud and gravel charging down the canyon,” says NIWA marine geologist Joshu Mountjoy.

The sediment then flowed up the Hikurangi Trough for at least 700 kilometres, past the Wairarapa coast.

The Kaikōura Canyon is one of the richest marine environments in the world, in terms of the number of species it hosts—especially in the sediment.

“There were a lot of animals living in the mud at an incredibly high density,” says Mountjoy. “All of that’s gone.”

Now, he has the chance to observe how life re-establishes itself. “We expect these events to happen maybe every 100 years—so maybe that’s why this system is so active. To actually be able to pin-point what impact an event like this has is huge. This kind of change in the deep ocean—I never expected to see it in my career.”