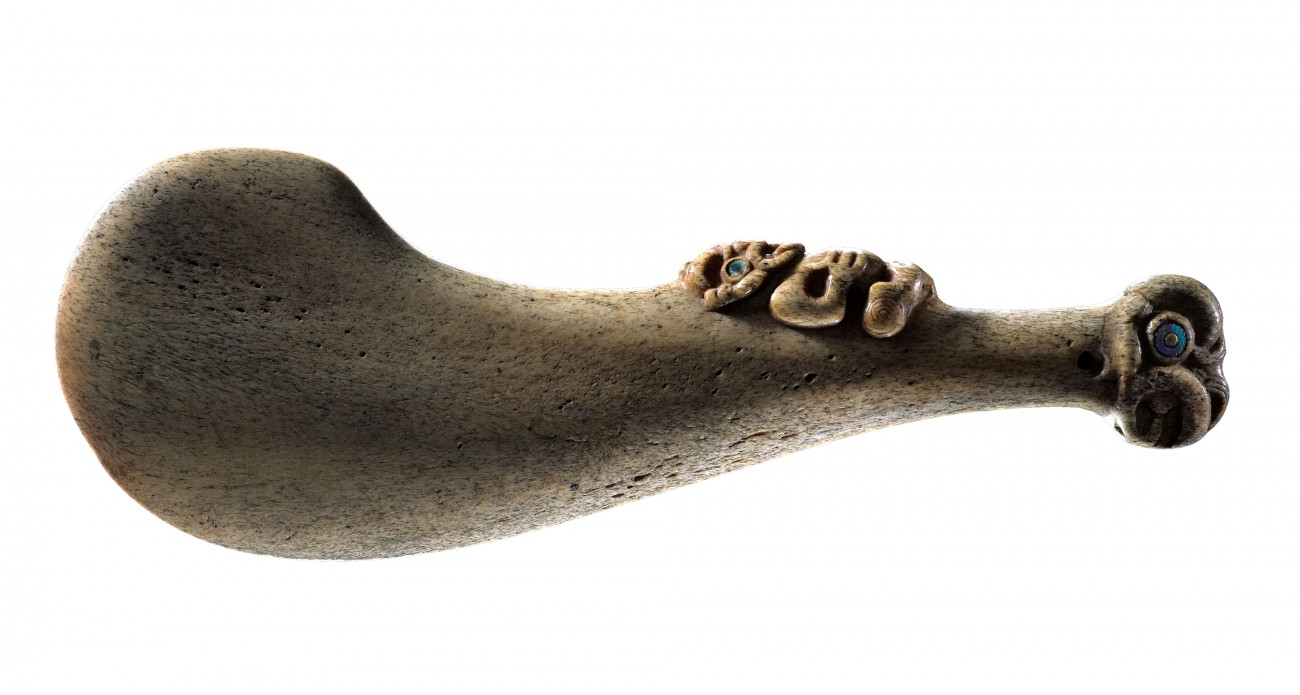 Among it’s holdings, Te Papa lists a wahaika, or short-bladed club. It’s made of whalebone, oat-like in colour, and has a carved figure on the lower blade edge, with inlaid paua shell eyes, hands clasped across the breast in the familiar pose of a tiki. The pommel of the handle features a bird-like manaia head, again adorned with paua eyes. At more than 430 millimetres long, the wahaika is a sizable and impressive taonga, and must have been a formidable weapon. But what makes this artefact of particular relevance is that its history mirrors the New Zealand experience.

It was almost certainly fashioned before European arrival and, given the level of detail in the finishing and adornment, was likely the work of a skilled carver, perhaps formally trained, maybe of high social status. Beyond that, little is known of its creation. Yet it was the subject of one of the early interactions between Maori and Europeans, and among the first items of the magnificently sophisticated material culture of Maori to be seen in Europe.

The only clue to the identity of the parties involved is a note glued on to one side of the club. In faded ink it reads, “Brought from New Zealand in 1777 by midshipman Burr in the Discovery. Given to his sister in Bath, when an old lady, gave it to Dr. Joseph Hume-Spry of that town, in whose family it remained until October, 1909.”

But there are some problems with this account. Burr was not aboard Discovery, nor was he a midshipman. Rather, the crew member was likely to have been John Davall Burr, who sailed on Cook’s second voyage aboard Resolution as a master’s mate.

Described as a “steady good officer” by his shipmate John Elliott, Burr is rarely mentioned in the accounts of others, save for an incident when he punched the naturalist Johann Reihold Forster to the deck for lying to him.

He kept a personal log of the voyage, making weather observations and recording the progress of the ship—a document recently scanned and analysed as a meteorological project into historical weather patterns in the United Kingdom. But between these somewhat perfunc­tory observations at sea,

Resolution makes safe harbour, and Burr lingers at his log. There, the inky loops of his practised hand record his duties fishing, cutting wood, provisioning, sailmaking and repairing, and tenta­tive approaches of “the Indians”.but not a mention of a transaction involving a wahaika.

Like many of the young men of his rank, he would have had an opportunity to trade with Maori, and in his choice of words is present a warm regard for the New Zealanders, an apprecia­tion of the challenges both parties faced in making themselves understood, but not a mention of a transaction involving a wahaika.

That duty was left to George Forster, the son of the naturalist Burr had accosted, who was also on the voyage. “I am much afraid that their unhappy differences with other tribes, were revived on our account,” recorded Forster on November 22, 1773, in Queen Charlotte Sound. “Our people not satisfied with purchasing all the hatchets of stone, patoo-patoos, battle-axes, clothes, green jaddes, fish hooks, &c. of which the natives of our acquaintance were possessed, continually enquired for more, and shewed them such large and valuable pieces of Taheitee cloth, as would not fail to excite their desires.” The result, Forster suggests, was a black market, where Maori would “rob their neighbours of such goods as the Europeans coveted”.

Did Burr trade tapa cloth for the wahaika? Was he trading with the owner of the taonga, or its thief? And did he care?

Burr went on to serve on a number of vessels as an officer and had the beginnings of a good career in the Navy, eventually earning his own command before being court-martialled after things came unstuck aboard an American privateer. It is believed he died, unmarried, at about 36 years of age.

However, unlike many of the crew who immediately sold artefacts collected on their voyages to dealers upon their return to Britain, the totem that Burr collected—by legitimate transaction or not—in the South Seas was passed on to one of his four sisters, Catherine, then to Spry, a surgeon in Bath (later mayor) who had treated her. Only later did it end up in the collection of William O. Oldman, a British collector and dealer of tribal art known for buying up the sundry holdings of small museums, keeping the best items and selling the rest. Oldman had a particular interest in Oceania, though he had apparently never travelled here. A substantial collection was housed in the basement of his brick villa in Clapham, where during the Nazi aerial bombardment of World War II, he and his wife also sought refuge. (The collection was fortunate to survive, as adjacent properties received direct hits.) Collection was purchased by the New Zealand government and returned to the then Dominion Museum. The wahaika had completed its circumnaviga­tion to end up where it started, geographically, though by every other dimension Aotearoa could not have been more different.

More than 200 years had passed, and the commercial relationships anticipated by the acquisition of the wahaika had not worked out well for Maori. But this was not to be the final stop on the journey. Today the wahaika is on loan to the American Museum of Natural History in New York, part of Te Papa’s travel­ling exhibition “Whales—Tohora” visiting nine museums in North America. Like the great tohora from which it was crafted, the wahaika seems destined to be forever on the move.