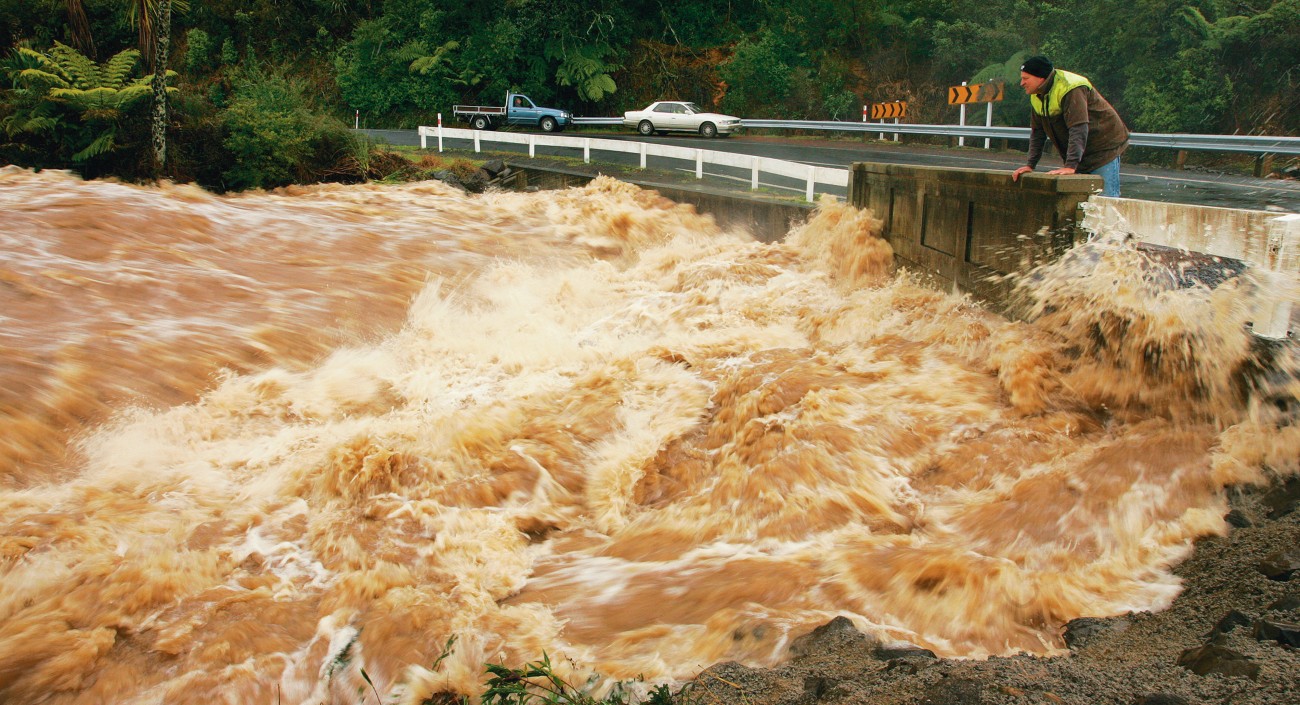 From midday friday 25 July, to midday Satur­day, a low deepened by 28 hPa as it moved towards the top of the North Island from the area east of Queensland. On Saturday afternoon, as the low moved over land near Kaitaia in Northland, its central pressure was around 960 hPa—lower than the storm that caused the Wahine disaster or the cy­clone of 1936. There were so many concen­tric isobars—lines representing barometric pressure—so close together on the resulting weather map that it resembled a dart-board, evidence of the damaging winds the storm was bringing.

This is why, on Saturday 26 July, the strongest winds occurred ahead of the front associated with the low, where the isobars were less curved. Winds reached 130 km/h with gusts over 150 km/h in exposed places along the east coast from Northland to Bay of Plenty. Trees were blown down, block­ing roads and cutting power to thousands of homes, while some houses lost parts of their roofs. Two men drowned when the fishing vessel San Cuvier struck rocks near Opo­tiki, and another man drowned when trying to paddle an outrigger canoe from Maketu to Tauranga. Heavy rain caused flooding and triggered numerous slips, endangering houses and cutting roads. The Kauaeranga River near Thames burst its banks, covering the road, and in Panguru on the Hokianga Harbour people were evacuated from their houses. On Mt Ruapehu a blizzard set in during Saturday morning when some 10,000 people were on the ski-fields. Not all were able to get off the mountain and some had to spend the night in their cars.

On Sunday, the weather eased as the deep low moved rapidly away to the east of Gis­borne. However, the respite was brief as an­other low developed over the north Tasman Sea and crossed New Zealand a few days later. Although not as deep, its track took it farther south, bringing damaging winds and fl oods to areas relatively unscathed in the first storm.

On Wednesday 30 July, the wind damage was particularly bad in parts of Manawatu, Horowhenua and the top of the South Island. Greymouth was struck by wind gusts estimat­ed at 160 km/h, which uprooted trees and tore roofs off many houses. In Nelson, one motorist drove under a large tree as it was fall­ing but escaped with the loss of just the car aerial. Filmed from a nearby cafe, he was on YouTube and internationally renowned with­in hours. In Horowhenua, a truck and trailer were blown over by the easterly gales and hundreds of trees snapped off or uprooted, cutting power to thousands of homes.

In New Zealand, the most damaging winds often occur downwind of moun­tain ranges. Dense air forced to rise over a mountain barrier accelerates downwards once past the ridgeline, causing the wind to be stronger than it was upwind of the moun­tains. Cyclone Bola was an example of this. Then, the worst of the flooding was on the Gisborne and Hawkes Bay side of the ranges but the worst wind damage was in Taranaki and in the forests around Taupo.

On Wednesday and the next day, heavy rain caused widespread flooding in eastern areas from Marlborough to Otago. More than 200 mm of rain fell along the Kai­koura Coast causing numerous large slips, which cut the main road and rail links. In north Canterbury, surface flooding was widespread and the settlement at Amberley Beach had to be evacuated when flood­waters began entering houses. Heavy snow fell over parts of inland Canterbury, closing roads around Tekapo for a time.

Northern areas hit by the first storm suf­fered further flooding and wind damage. Two people drowned in Northland while trying to cross a flooded creek, and several towns in the Coromandel were cut off after 300 mm of rain fell in the ranges. In Hawke’s Bay, storm surge eroded the coast, destroy­ing two baches and damaging other prop­erties. Insurance losses from the two storms have been estimated at over $10 million.

To have two destructive storms so close to­gether, although not common, is not without precedent. The large-scale atmospheric wind patterns that create a favourable environment for storm development will sometimes persist through one event and trigger another.

As to the possible role of climate change, while meteorologists are reluctant to at­tribute individual storms to global warming, an increase in storminess is consistent with predictions of atmospheric behaviour in a warmer world. As the air becomes warmer it is able to hold more water vapour. When the air inside a developing storm rises, some of the water vapour condenses, releasing latent heat, which intensifies the storm’s develop­ment. This mechanism plays a key role in the explosive deepening of lows like the one that occurred on the 25 July. And feeding these storms with warmer, wetter air only increases the amount of rainfall further.

This winter may have been a window onto our future.