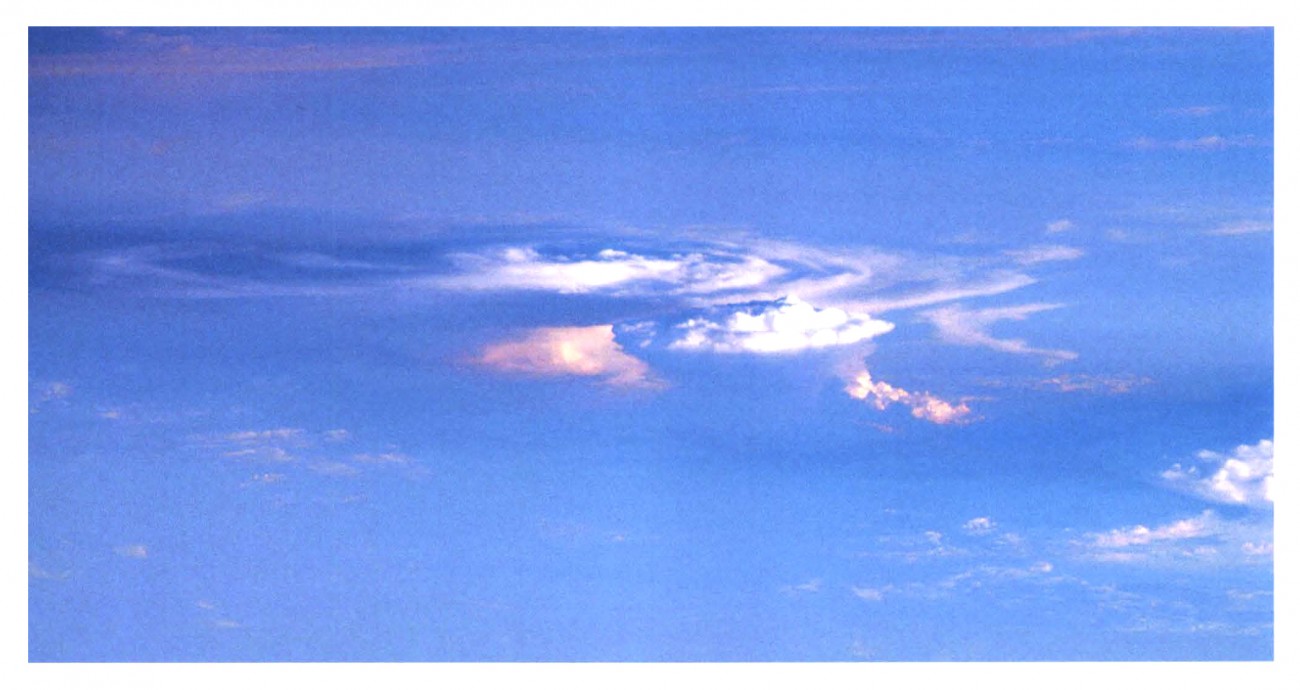 Among the paintings currently hanging in Te Papa is a striking celebration of waves by Michael Illingworth. A strong wave pattern rippling through clouds is echoed by waves in tree-line, sea and rocks. All are witnessed by half the head of a green-faced observer wide-eyed with astonishment but blessed with a golden eye like the ball of the sun.

We live in an atmosphere whose behaviour is characterised by wave action across an enormous range of scales. The clouds in the painting are reminiscent of clouds formed by Kelvin Helmhotz waves. These clouds have wave crests spaced in similar fashion to those in the paint­ing, although they have a flat base. As you watch them, the crests gradu­ally become taller and narrower then topple over like a wave breaking on a beach. Although this takes place in slow motion compared with an ocean wave, it is usually frustratingly quick if you are trying to find a cam­era to capture it on film. Also, the clouds are often thin and dull grey in appearance and seldom look as satisfying in a photograph as in the sky. Kelvin Helmhotz waves form at the boundary between two layers of air that are moving at different speeds. As their crests reach up into the upper layer they are toppled by the higher wind speed there.

Arguably the most photogenic clouds formed by atmospheric waves are the altocumulus lenticu­laris found in eastern areas of New Zealand when strong north-west winds blow across the main ranges. These are particularly spectacu­lar when lit up by the red and yellow light of sunset. When air is forced to rise over a range of mountains, gravity pulls it back down on the lee side, causing it to oscillate up and down, forming a series of waves downwind of the mountains much like those seen in a river when water flows over a rock. These are known as standing waves, because air (or, in a river, water) travels through the troughs and crests of the wave pattern while these remain in the same place. As air rises into a crest, it expands and cools, causing cloud to form; then, as it descends into a trough, it is compressed and warmed, causing cloud to dissipate. Although the cloud appears to hang motionless in the sky, the air can be moving through it at more than 150 kph.

Such waves can extend hundreds of kilometres be­yond the mountains and often show up clearly in satellite images. Since the restor­ing force acting on the air once the mountains have deflected it upward is gravity, they are known as gravity waves. They are typical of a stable atmos­phere and can sometimes be seen in satellite photos propagat­ing for thousands of kilometres through the stratocumulus layer formed under an anticyclone having been initiated by vertical motions in a cold front.

Paradoxically, the giant cumulo­nimbus clouds that typify an unsta­ble atmosphere and cause thunder­storms can also give birth to gravity waves. When cumulonimbus clouds form over land heated by the sun, there is normally a stable layer of air beneath them that the warm air over the land has to break through as it rises. Downbursts of cold air fall­ing out of the clouds excite gravity waves in this stable layer like a stone thrown into a pond. Further cumulo­nimbus clouds often develop where downbursts from two thunderstorms collide.

Cumulonimbus clouds can also create gravity waves high in the atmosphere. Giant “anvil” clouds, with their characteristic flat, spread­ing tops, form when a rising column of air hits the tropopause—a stable atmospheric layer that constitutes a type of lid on the lower atmosphere (the troposphere), in which most weather occurs. The rising air punch­es its way through the tropopause into the relatively warmer strato­sphere, then collapses back down, forming the anvil shape. The warm air in the up-draught tends to rise in pulses, each like a stone thrown up into the tropopause, causing ripples to radiate through the anvil. Astro­nauts have taken some spectacular photographs of this effect.

Waves are also evident in atmos­pheric motion on the larger scale. As the mid-latitude westerlies circle the South Pole, they bend and twist from south-west to north-west in giant waves broader than the Australian continent. A 500 hPa map of the atmosphere covering the Southern hemisphere shows contour lines weaving towards the Antarctic then away towards the tropics as they circle the pole. Typically, the contour lines form four or five large waves in the circumpolar westerly flow (at their largest there is room for only three) with a host of smaller waves woven into them. While the large waves move slowly westward, the smaller waves move eastward, and the smaller they are the faster they move.

The inter­play between the waves of different sizes goes a long way to explaining the development and decay of the fronts, lows and highs that make up the weather. As air blows round the curves in the wave patterns it acquires vorticity, or spin. As it blows around the crest of a wave, moving from an area of south­westerlies to an area of northwest­erlies, it acquires cyclonic vorticity, which favours the development of a low-pressure centre at sea level. The stronger the wind, or the sharper the change of direction, the greater the tendency to develop a surface low. When a short-wave trough in the westerly flow catches up with a long-wave trough, the curvature and wind speed increase, and thus the tendency to develop a surface low also increases. Conversely, when a short-wave trough moves into a long-wave ridge, the low tends to weaken. Typically, a low forming in this way will do so on an existing front. On a sequence of weather maps, the front will appear to buckle and develop a wave at the location of the new low—hence the term wave-depression.

On a very much smaller scale, at­mospheric motion can also produce sound waves. Sound can be excited by strong winds blowing over cer­tain kinds of terrain or obstacles such as trees or buildings, but doesn’t influence the weather directly, despite the hopes of those horti­culturists who try to break up hail stones with loud noises. However, sound waves can interfere with weather forecasting.

Encompassing the globe, rolling from the ranges, resonating over topographical irregularities, atmos­pheric waves are all around us—an elemental perpetuum mobile worthy of artistic celebration.