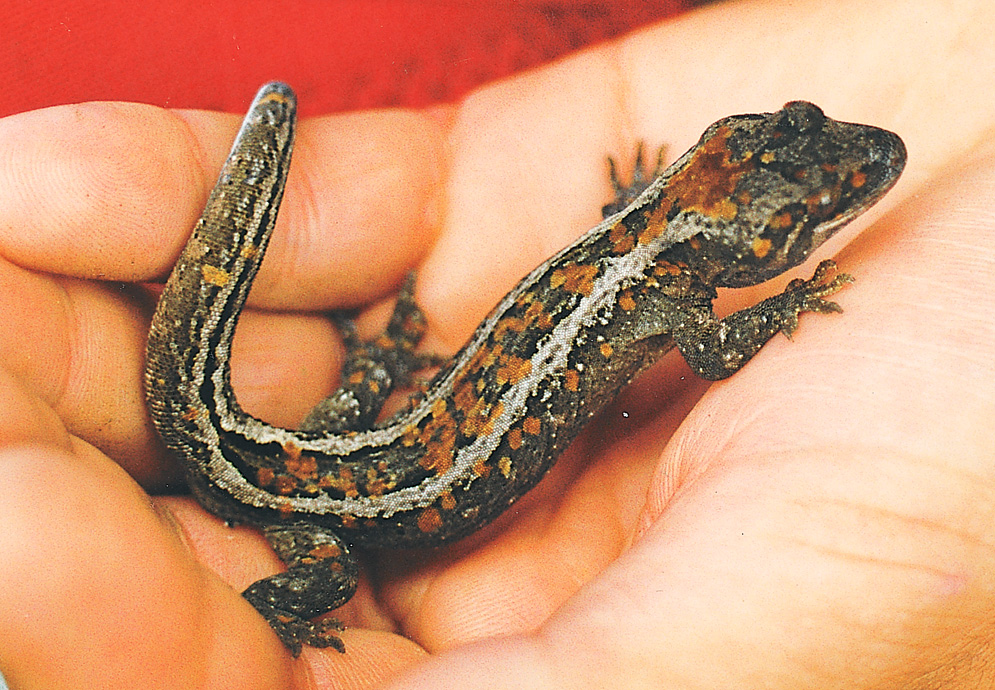 In January of this year, Leigh Marshall, a Univer­sity of Otago student, happened upon a strange-looking gecko on privately owned land on Mt Roy, overlooking Lake Wanaka. It had a striking orange-coloured mouth lining and prominent orange spots and blotches on its back.

She took a photograph and reported the find to Department of Conservation staff, who regarded the sighting as something very unusual and highly exciting.

Previously, only the so-called “common gecko,” Hoplodactylus maculatus, was known from this general area. Common geckos never have orange patterns on their backs—they are usually drab browns, olives and greys—and they have pink mouth linings. Herpetologists consider that the new gecko is most probably a type of forest gecko, akin to Hoplodactylus granulatus.

It has long been a mystery why forest geckos are missing from most of the east coast of the South Island, especially the Catlins in Otago and the area around Picton. Forest geckos are one of New Zealand’s most common and widespread species, being found all over the North Island, through much of Nelson-Marlborough, and down into Westland.

Not in Fiordland, though. Only a single forest gecko specimen has been collected from there, a juvenile from the Esperance Valley, and it was not a typical forest gecko in appearance, and was not found in forest, but above the treeline.

Another unusual forest gecko was found in Southland’s Takitimu Mountains in 1996, again at high altitude. Both it and the Esperance specimen had a herring-bone coloration.

It seems that a new group of strange-looking forest geckos is emerging from the foggy and unpredictable climates of ranges in the South Island. All are cryptically coloured, which may help explain why they have only recently been discovered.

They are, in fact, extraordinarily difficult to find. An expedition into the Takitimu Mountains during the summer of 1997 failed to locate other specimens. Similarly, two trips were made to Mt Roy in March of this year to locate other specimens, but again the searchers had no luck, although they did recover two sloughed skins. Analysis of scale patterns from these skins confirms that the Mt Roy gecko is very similar to the Takitimu gecko, and very dissimilar from forest geckos.

Although yet to be confirmed by genetic data, these high-altitude geckos may be new species, though just how many species they represent is impossible to guess. Only the Mt Roy gecko, at least from speci­mens seen thus far, has the striking orange, asymmetri­cal coloration on the back.

Since the gecko’s orange spots are identical in colour to a common lichen found throughout central Otago, it is thought that the lizard has evolved to take advantage of the camouflage afforded by the lichen when the reptiles come out on to the rocks to bask during the day.

With several new sightings in the last few years, it is clear that herpetology in New Zealand is in a growth phase, and that we are still some distance from realising the true extent of this country’s lizard fauna. On a land area basis, the diversity of our lizards already exceeds that of other temperate coun­tries, such as Australia.

Who knows what new lizards await the sharp eyes of curious Kiwis?