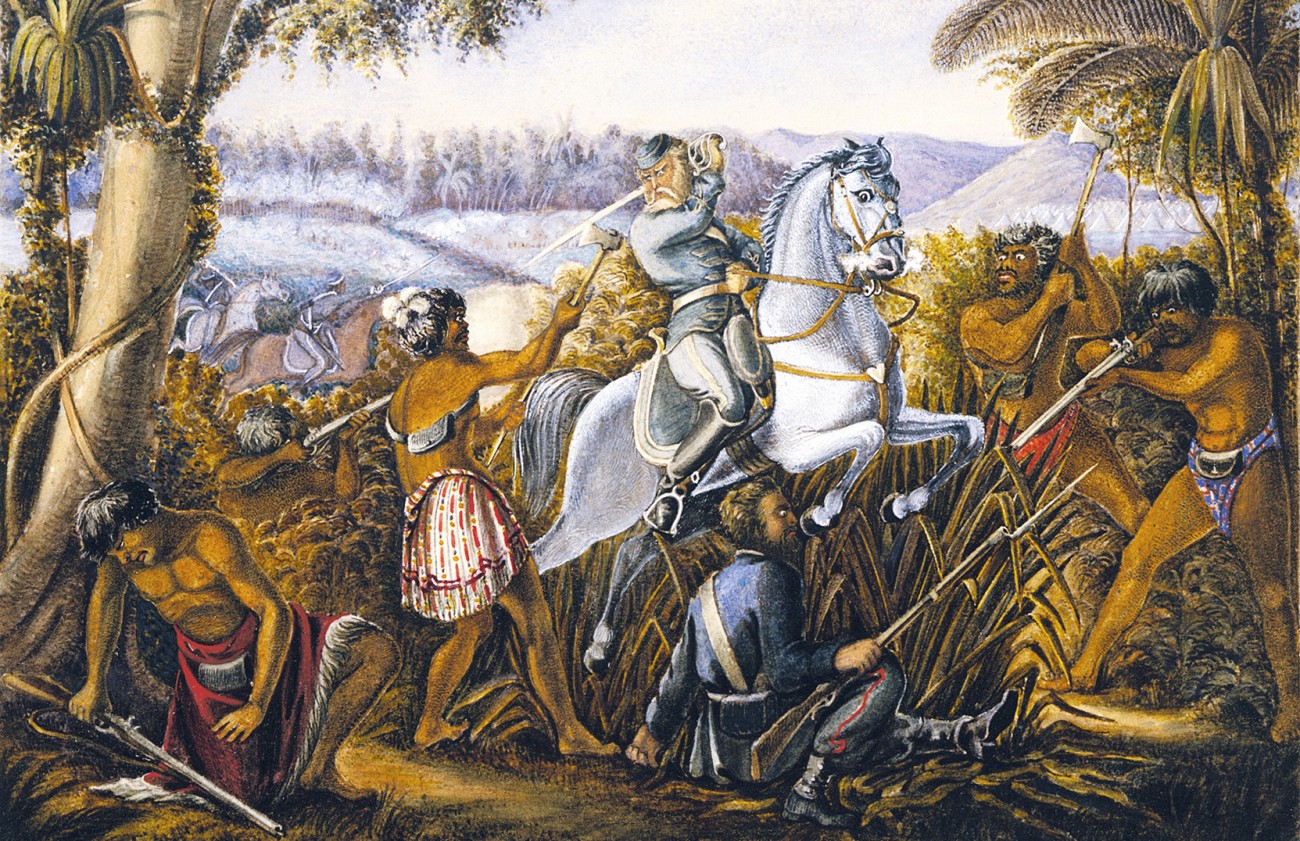 Society has always sought its heroes, and Major Gustavus Ferdinand von Tempsky was one of ours. He inspired men and set women’s hearts a-flutter as a folk hero of the New Zealand Wars—an adventurer, soldier, artist.

Born in Prussia in 1828 to a military family, von Tempsky trained in Berlin, then spent time on Nic­aragua’s Mosquito Coast, where he commanded a guerrilla force deep in the jungle. After a few years trotting around the globe, including an un­successful attempt in the early 1850s to make his fortune in the Californian gold rush, his romanc­ing and marriage to Scotswoman Emelia Bell and a stint of Australian farming, he was drawn to the goldfields of New Zealand.

But meagre takings of Coromandel gold had him enlisting in the Forest Rangers, a group of men he led to fight Maori on their own ground: in the bush. He was an intrepid leader with un­conventional commando-like tactics, gaining the respect of both his men and Maori, who named him Manu Rau—100 birds—for how he seemed to flit from one place to another.

His swashbuckling style, complete with long dark locks, felt hat, Garibaldi shirt, revolver and bowie knife, was all part of his flamboyant persona. In a self-portrait Encampment of the Forest Rangers, he is depicted in a dashing costume with a sword at his side in the company of other officers who are rendered rather more plainly. Throughout the New Zealand Wars of the 1860s, his carte­de-visite (small portraits that were popular before newspapers printed photos) flew out of the photog­rapher’s studio faster than could be supplied.

In times of peace von Tempsky was the toast of Auckland society (he was a fine musician and singer) who spent his time painting watercolours, ranking as a minor New Zealand artist. New Zealand artist Rose Young wrote: “In the best of his New Zealand paintings, colours become intense and saturated, with brilliant emeralds and blues, clear crimsons and a range of greens decorative rather than realistic.”

But a quiet urban existence was not for him, much to the lament of his wife, who wrote in a letter, “Oh, for a quiet and secluded life with you and plenty of hard work, when I daresay you would be wretched for want of fame and blood.” And so it came to be true. In 1868, he took up arms in Taranaki, which proved to be his undoing. He was shot in the forehead by a Maori sniper in a battle at Te Ngutu o Te Manu, killed at just 40 years of age.